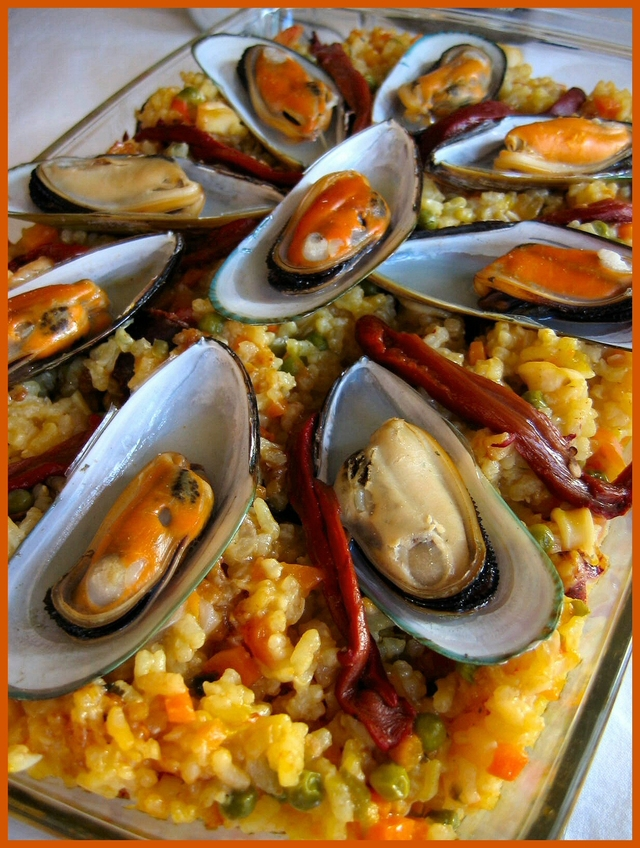 Cast your minds back to, say… November last year. To be precise, the 12th of November, a week after the London food bloggers got together with Becks & Posh at Gordon’s Wine Bar. Why specifically the 12th? Because this was when the London food bloggers got together at yours truly the Cooksister’s house for an afternoon of Spanish foods and wines. Andrew and I had originally conceived the idea as a wine tasting with snacks, but as is our wont, once the food bloggers warmed to the idea there was no stopping them and a banquet was imminent 😉

So first, a word about the preparations. As this had been conceived as a vinocentric event, the first order of business was to source some Spanish wines. Andrew tracked down a good source of Spanish wine at Handford Wines in South Kensington and after the Gordon’s Wine Bar get-together, he and I set off to Handford to gather our wines. We found pretty much everything there except Pedro Ximinez and Rueda, both of which Andrew was very keen on including. If you are looking for a bottle of something out of the ordinary, Handford is well worth a visit – I was particularly impressed with their range of dessert wines, including the seldom-seen South African heritage sticky Vin de Constance.

With the wine pretty much sorted, the only thing that remained was to organise the food and find the last 2 wines. The Pedro Ximinez Andrews tracked down at his local Waitrose while I took a lunchtime stroll down to Exmouth Market and the home of all things Spanish in London: Brindisa. In next to no time I had acquired a bottle of Cava, a bottle of Rueda, some Calasparra paella rice, adorable mini chorizos and morcillas, as well as some red piquillo peppers destined to be stuffed.

I had rashly promised to make paella, so the next step was to research paella recipes and to come up with some sort of composite recipe that I could use (see the very end of the post for the recipe), and on the day of the tasting I also had to stuff the peppers. This turned out to be a fiddly and delicate task – the peppers are marinated in oil and therefore slippery as eels, plus you have to be careful not to stuff them too robustly or you risk piercing them… Oh the joys. But everything went well and by the time people arrived, everything was approximately ready. In attendance we had (from left) Cecile, Jenni, Andrew, me, Johanna and Todd (plus Nick, who was taking the photo!), and everyone was welcomed with a glass of cava and some of Johanna’s delicious chorizo, chestnut, sage and sun-dried tomato skewers. Then it was down to the serious business of wine tasting. We were determined that this should be a proper tasting, not just a very long meal with a big variety of wines, if you get my drift! So Andrew and Nick had carefully wrapped all the bottles and we tasted everything blind. This worked really well as everyone got into the discussion about the wine and with the help of our world wine atlas, everyone could have a go at guessing where in Spain the wine was from. First up was a Manzanilla sherry and two white wines, after which we took a little food break and had the paella.

Here’s a whole bunch of pictures of us attempting to be serious wine tasters: 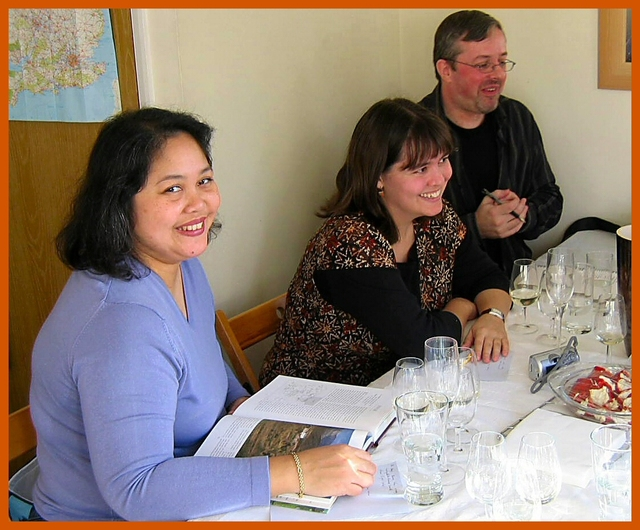 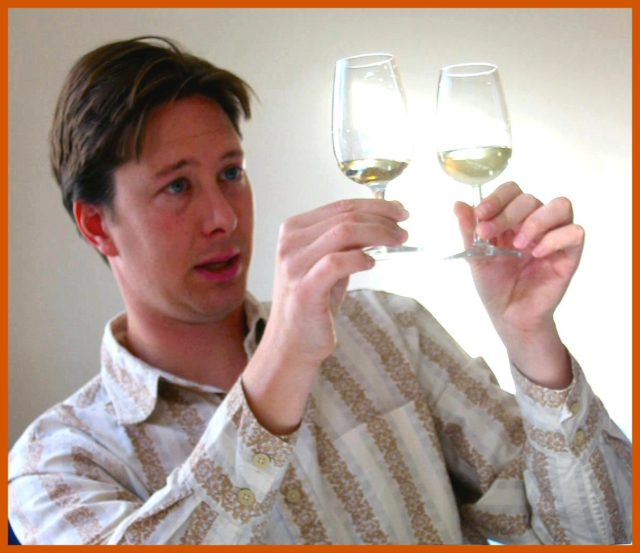 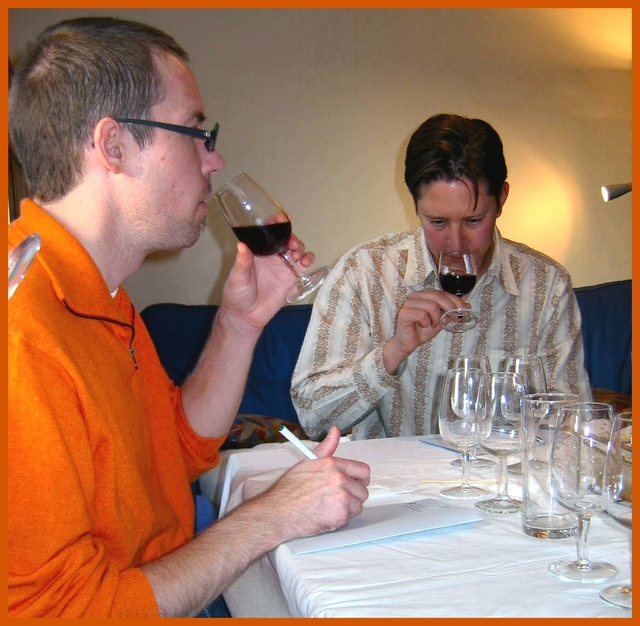 After that, we turned to the three reds, followed in no particular order by all the rest of the food. We had albondigas (spicy meatballs) and quail’s eggs with lemon creme fraiche wrapped in prosciutto from Cecile; flash-fried salt-sprinkled pardon peppers from Todd; homebaked olive bread from Andrew; a ratatouille-type dish topped with manchego from Johanna, as well as her sublime sherry-marinaded seared tuna steaks; and stuffed peppers from me, plus I heated a batch of mini-morcillas. More food than anyone needed, but definitely a necessary respite in the drinking!! 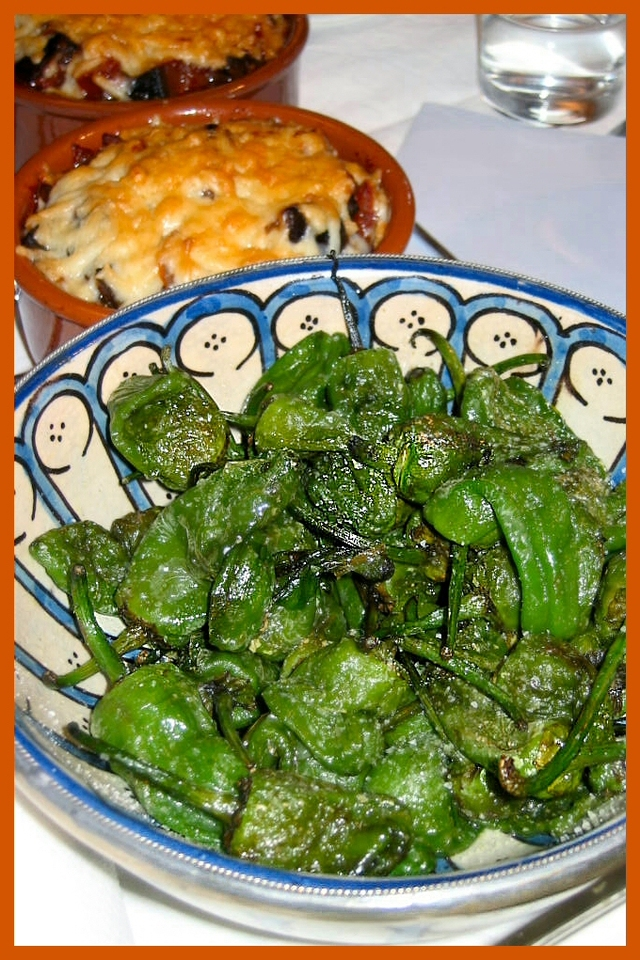 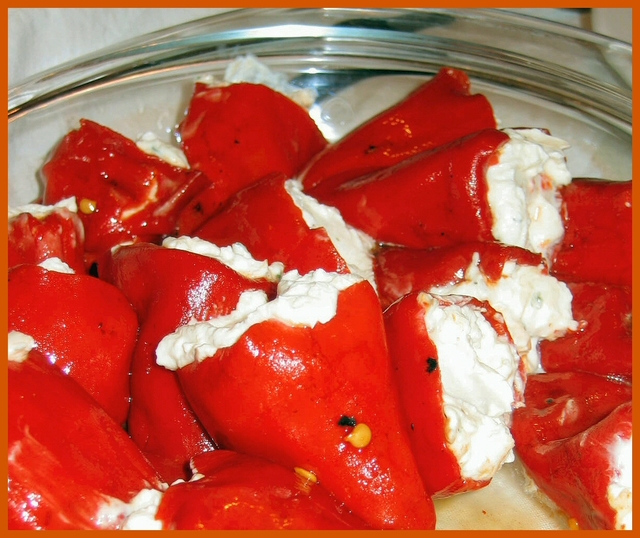 And to round everything off, Jenni (who was in the middle of moving house and therefore kitchenless!) had brought cheese and membrillo (quince paste) – yet more fine products from Brindisa. She brought a selection of three varieties: Suspiro ( a soft goat’s cheese); Zamorano (a hard sheep’s milk cheese very similar to Manchego); and Picos de Europa (a blue cheese from the hills in northern Spain). All three were delicious, but the Zamorano was definitely my personal favourite. To wash this down, of course we had to try the Pedro Ximinez, but as you’ll see from my tasting notes, by this time attention had wandered (and the previous tastings had taken their toll!!) But I can vouch for the fact that it is a delicious, sticky after-dinner treat. 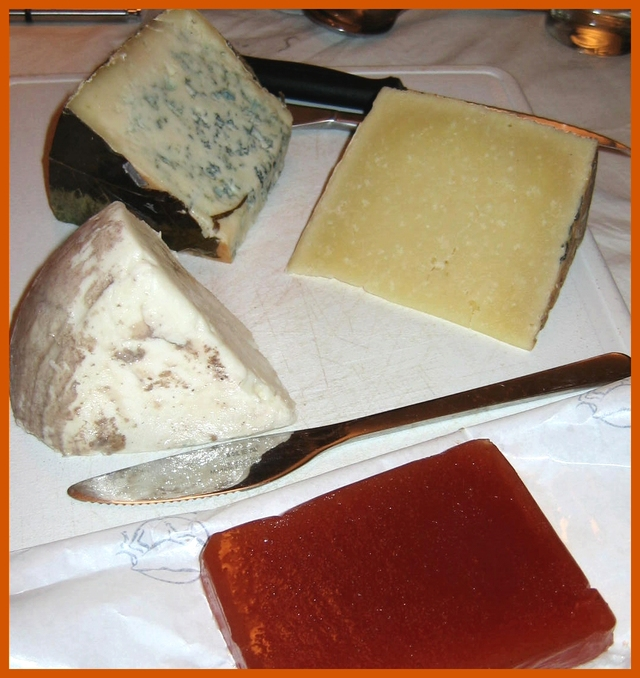 And so, about 6 hours after the first guests had arrived, everybody started to wend their weary way home, having learnt a good deal about Spanish wine and tasting technique in general and, as always, having had a whale of a time indulging in our favourite obsessions of good food, good wine – and photographing them both 😉

For my wine tasting notes scroll down past the and paella recipe, or click to read Johanna‘s post about the afternoon.

Why not try some of my other Spanish and Spanish-inspired recipes:

1 red pepper, grilled until the skin blackens and blosters, then peeled and cut into strips

12 mussels on the half shell

a pinch of saffron strands (if this is beyond your budget or unavailable, you can add turmeric instead once you have added the liquid – but be aware that this will change the taste significantly)

a sprig of parsley, finely chopped

about 800ml fish stock (if you have bought uncooked prawns, use the cooking water instead.  Clearly, I used fish stock cubes!!)

I bought most of my seafood cooked but if you bought anything uncooked it will need some preparation.  For fresh mussels, see here.  For fresh squid, see here.  For prawns, simmer them for 4 minutes or so in a large pot of boiling salted water (when they float to the surface, they should be cooked).  If using the mini chorizos, grill them, slice them in half and keep warm.

1. Crush the garlic, saffron, parsley and a pinch of salt together with a pestle and mortar.

2. Gently steam the shelled mussels until hot through. Decant into a bowl and keep warm, then repeat the process and steam the mussels on the half shell.

3. Heat some olive oil in a large frying pan or paella pan. Add the onion, green pepper and carrot and fry gently for about five minutes. Add the chopped tomato and squid (with the tentacles) and fry on a low heat for another ten minutes.

4. Add the rice and stir well to make sure that it is thoroughly coated. Add fish stock (or the water from boiling the prawns), shelled mussels and the garlic/saffron/parsley mixture and bring to the boil.

5. Season with salt. Cover with a lid, turn the heat right down and cook very slowly for about ten minutes. Add the prawns, peas and mini chorizos (if using) and give it a stir.

[At this point, dues to space constraints, I spooned the mixture into a large pyrex dish.]

6. Arrange the mussels on the half shell and strips of red pepper artistically on top of the rice, put the lid back on [or wrap loosely in aluminium foil if you have transferred to an ovenproof dish] and place in a medium hopt oven for another ten minutes, checking that it has enough water. If you think it is getting too dry, add more water, but try not to stir it after you have arranged the mussels and peppers on top.