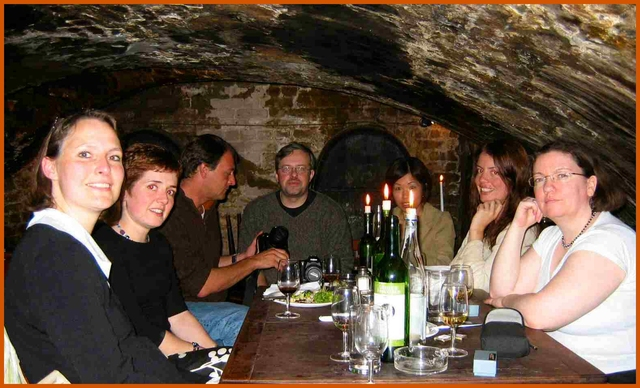 As usual, I’m a teensy bit behind with this post (it has already been covered by Sam, Andrew, Johanna, Anna, Christina and Jamfaced) …  but hey, you’ve seen how I run EoMEoTE, so my tardiness should come as no surprise by now!

Anyway, moving rapidly along.  While I was still in the USA, I got an e-mail saying that Sam of Becks & Posh would be in London briefly and was keen to meet up with the London food bloggers for lunch somewhere in Central London.  Yippee!!  Having missed Pim’s visit by being in the US, I was glad to be around for this visit! So last Saturday at noon I duly presented myself at Embankment tube station.  Before I went to meet everyone I nipped into African Enterprises to get Sam a little gift – a bag of my beloved Cruga biltong.  I figured that if she eats Marmite, she will probably be up for another love-it-or-hate-it food!  From there I headed across the road to Gordon’s Wine Bar.  Established in 1890, this is reputedly London’s oldest wine bar and is reached by a somewhat precipitous descent down a steep flight of narrow stairs from Villiers Street.  Once at the bottom you enter a kind of Aladdin’s cave for wine lovers.  The pub is pretty much entirely built under old railway arches below Villiers Street and it has atmosphere in bucketloads.  OK, so you can only stand upright in the centre of each arch (the rest of the time you are huddled, Hobbit-like, to try and avoid cracking your skull on the brickwork – see picture above!!) and even if you can stand up, you have to be very alert as it’s pretty much twilight down there and you can easily do yourself an injury by tripping over fellow-drinkers, your own feet, waitstaff, or worse.  But once you are seated comfortably, it’s a wonderful place for a unique London tete-a-tete.

I arrived to find a large chunk of our party already ensconced (well, once my eyes had adjusted to the gloom, I managed to make out their familiar outlines ;-)) – Johanna (The Passionate Cook, Andrew (Spittoon), Christina (Thorngrove Table), Anna (Baking for Britain) and of course, guests of honour Sam (Becks & Posh) and her beloved Fred.  We were later also joined by Keiko (Nordljus), Cecile (English Patis) and Nick (JamFaced), making this one of our largest ever UK foodblogger gatherings.  After introductions all round I spent a while chatting to Sam and I can assure you that she is every bit as lovely in the flesh as she comes across on her blog.  I handed over my packet of biltong (which, incidentally, she managed to slip past US customs!!  Woo hoo! We food bloggers are the real subversives of the 21st century… ;-)) and in return, Sam dished out the most adorable little boxes of chocolate that she had brought along all the way from San Francisco. 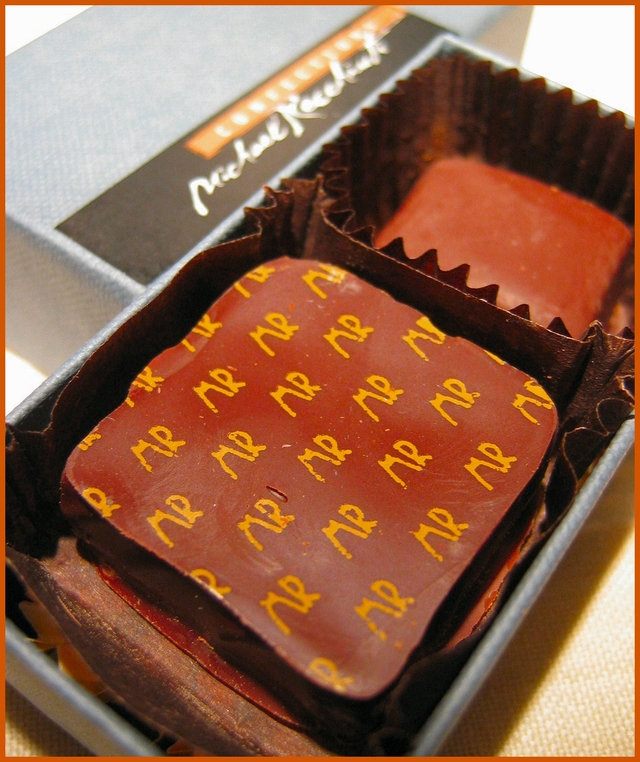 These little jewels turned out to be from Michael Recchiuti, a San Francisco chocolatier – and what better man from whom to buy chocolates than one who has just co-written a book called Chocolate Obsession?? I did manage to control myself and not eat the chocolates until after I had got them home and photographed them, but after that they didn’t stand much of a chance.  The one in the foreground is Michael’s signature piece – dark chocolate wrapped around extra-bitter chocolate ganache flavoured with burnt caramel.  Sound good?  Well, I can assure you it is! The caramel imparts a sweetness without being cloying and the dark chocolate provides a nice counterpoint.  It was the smaller chocolate in the background, though, that had me sighing with pleasure.  It’s dark chocolate wrapped around a caramel flavoured with fleur de sel.  Oh my.  At first, it’s just a lovely, particularly smooth caramel covered in dark chocolate that slowly melts in your mouth.  But then, right at the end, you suddenly find the flakes of fleur de sel in the centre and suddenly your tastebuds are more awake than they’ve been for days!  I was actually laughing in delight when I hit the salt (I’m sad that way…).  This one is a real keeper – it’s just a pity that there was only one of them.  Time to start saving up for that trip to San Francisco I guess.   Thanks Sam!

Anyhow, I digress.  We all settled down to a glass of wine (sorry – no notes taken so I can’t tell you what exactly I had) and Sam and Fred had a ploughman’s platter which they pronounced distinctly average (but that didn’t stop the rest of us from picking at the cheese that they handed around after they’d had enough!!), but hey, we weren’t there for the cuisine!  Spent an enjoyable afternoon discussing ideas for future blogmeets, unusual ethnic restaurants in various parts of London, and a possible foodblogger trip to Europe in the new year.  Watch this space.

All good things must come to an end though, and eventually people started slipping off.  Andrew, Christina and I decided to decamp to the Henrietta Green Food Lovers’ Fair in nearby Covent Garden where we shopped up a storm (but that’s a subject for another post…), while Sam and Fred had to continue with their whirlwind tour of friends in London.  But I do believe it’s safe to say that a good afternoon was had by all.

« Garlicky stuffed mushrooms and hello 2006!
What the papers are saying… »