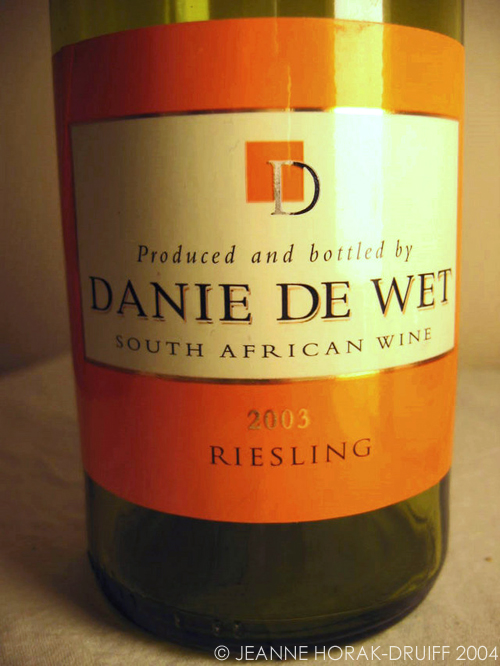 Where has the month gone?  It seems like just the other day that I was writing a WWBW post at this same desk, but my calendar tells me that the next WWBW is already upon us, so it must have been a month ago! This month Derrick from An Obsession with Food has chosen New World Rieslings – and what a wise choice! Riesling, sometimes described as the noblest white cultivar of all, is a native of Europe – more specifically, Germany.  The first documented evidence of Riesling plantings is to be found in the 1400s in Germany (although there are unverified references to Riesling in Austria even earlier than this). But essentially, it is a cool-climate grape, happy to grow in northern Europe in decidedly un-New World conditions.  So what a grand idea to make WWBWers go out and try Rieslings from areas as far from Riesling’s origins as you can imagine.  Talk about moving outside one’s comfort zone!

Since these early plantings, Riesling has grown to be the dominant grape in Germany where it is regarded as a late ripening variety which will ripen only if given pride of place on the most favoured sites.  In the Mosel valley, this means the precipitous slope with the sunniest aspect (trust me, in the Mosel valley they grow grapes where sensible mountain goats would fear to graze!).  Because the grapes are left on the vines as long as possible to encourage full ripening, the wines tend to develop all sorts of complex and subtle flavours, but in general German Rieslings, when properly made, are low in alcohol with a fresh crispness and remarkable ageing potential.  Of course, when indifferently made, Riesling ends up as wines like Black Tower, Blue Nun or Piesporter, none of which have done the grape variety (or Germany’s wine-making reputation in general!) much good.  Riesling is also widely grown in Alsace where it is made into huge, elegant wines tinged with a steely dryness quite unlike the German Rieslings.  Riesling is also an excellent candidate for dessert wines as it is susceptible to botrytis or noble rot, the fungus that shrivels the grape and concentrates the sugars to produce complex amber-coloured “stickies”.

But these are not the Rieslings I’m here to write about today – Derrick had decreed that we should drink New World Riesling and so my thoughts turned to the warmer climes of California and the southern hemisphere.  Surprisingly, Riesling grows well in climates that are much warmer than its native Europe.  Australia grows a tremendous amount of Riesling (called Rhine Riesling, or simply Rhine) and California has a long tradition of producing late harvest Johannisberg Riesling.  I have also had some truly memorable New Zealand Rieslings and was tempted to have one for WWBW4, but in the end I knew I had to try to find a South African Riesling.  A word of caution to those venturing out to buy a South African Riesling:  if you are looking for the real Riesling grape, beware any bottle labelled “Paarl Riesling” or “Cape Riesling”.  These are not made from the German Riesling grape but from a French variety called Cruchen Blanc.  Personally, I’m not at all fond of it but it has proved popular enough over the years – vive la difference!  In any event, South Africa has not in the past been known for its exceptional Rieslings, even once we had started producing “proper” Rieslings as opposed to Cruchen Blanc.  But all this is changing.  There is a new generation of wine makers who are no longer content with the high-volume grapes that were planted for many years to make masses of very ordinary wine, but who want to try their hand at any noble variety you’d care to name.  In fact, here is a fantastic piece written by South African winemaker Bruce Jack of Flagstone Wines (who clearly knows his stuff!) rebutting an article in which Jancis Robinson dismisses South Africa as a source of good Rieslings.  It is absolutely beautifully written – here is how he recommends you treat the Riesling vine:

“Give her water, but make her climb, not against the jail wires of a vineyard pole, but against the ethereal element of the wind, her ravaging, challenging cohort.”

Just go and read it!

The Riesling that I eventually found was the Danie de Wet Riesling 2003 (about £4.50 as I recall).  I was pleased about this as I have visited his De Wetshof estate for wine tasting previously and have a lot of respect for him as a winemaker.  He is known primarily for his Chardonnays – De Wetshof makes at least four different Chardonnays, each in a slightly different style in terms of wood maturation.  The tasting venue is a gracious building built in the Cape Dutch style and I remember sitting at a highly polished dark wood table in a beautifully proportioned room sipping his heavenly Bateleur chardonnay.  I had not tasted his Riesling but was keen to try – and it had a reputation to live up to!!  Before we get onto the taste, just a quick word about the region where this wine was produced.  The Robertson wine-producing region is about 120km north-east of Cape Town and situated in the hot, dry interior of South Africa. It has lime-rich soils which are particularly suited to white varieties and is about as different from Riesling’s cool, hilly German roots as you can imagine.  And yet, people like Danie de Wet is doing a fine job of growing and vinifying Riesling there.  So how does it taste??  Well, read on.

I served my bottle with a meal of pepper-crusted seared tuna steaks with a citrus salsa on a bed of garlic mash (recipe to follow in its own post) and I think it may have been a little over-chilled initially, but after it had been out of the fridge for about 30 mins, it was just right.  As you will see from the tasting notes, it is a big wine and was more than a match for the robust flavours of the food.

Nose – very shy at first.  After it had some time to breathe, fresh apples. None of the kerosene notes that many South African Rieslings show.

Palate – A big, creamy mouthfeel.  I would guess that malolactic fermentation was allowed to occur – it doesn’t smell oaky, so the creaminess is unlikely to come from wood (and besides, the label mentions no wood maturation…).  Good zingy acids with more of the apple flavours that the nose suggested.  On the finish the apple flavours become more mellow and spicy, like stewed apples.  The wine has an extraordinarily long finish and a great deal of body for a white.  Well balanced.

Overall I would give it a 15/20.  And for the price, I think you would struggle to do a lot better.  It’s a good wine for the ABC (anything but Chardonnay) brigade who don’t want Chardonnay, but don’t want something bone dry and flinty either.