You are here: Home / Recipes / South African Soetkoekies for IMBB #10 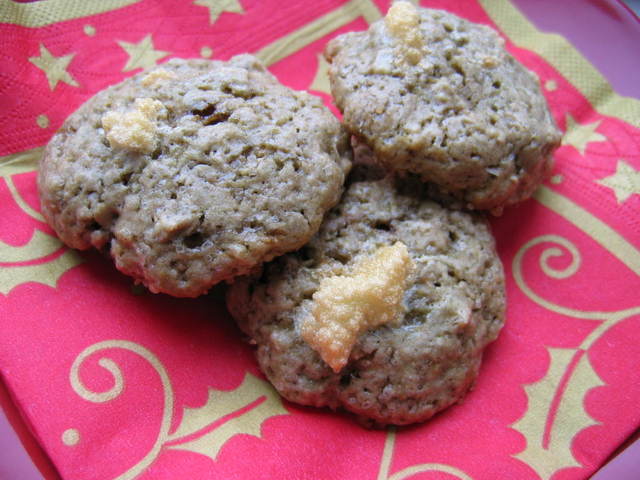 And so another month has come and gone, and another IMBB is upon us!  I can’t believe this is already the tenth edition and the seventh one I have participated in – time really does fly when you’re having fun! “Is My Blog Burning”, a worldwide web cooking event and the brainchild of Alberto of Il Forno, continues to go from strength to strength.  The host this time round was Jennifer from The Domestic Goddess and as a theme she chose cookies.

Now, as I have mentioned before, I am not a baker by nature.  For one thing, the required preciseness scares me off, and for another, I have practically no baking equipment!  But, undeterred, I ploughed ahead and did a bit of cookie-based research to find something suitable to bake.  I must have had the knack for baking at some stage in my youth because I do remember baking cookies when I was little. My mom (who must have been quite the domestic goddess in her time!) had all the right stuff for cookie baking – huge stainless steel baking sheets, a cookie press with every attachment known to mankind, cookie cutters, scales, an old-fashioned ceramic mixing bowl and a box full of chocolate sprinkles, silver balls, birthday cake candles and other baking paraphernalia.  I remember helping her make elaborate cookies with the cookie press or making little heart shaped cookies that I was allowed to press out and put on the baking sheets.  My early cooking attempts also included Krispy Crackolets from My Learn to Cook Book (and incidentally, I discovered when I went home in June that I kept my book!!  I’ll have to bring it back with me next time I go!) which certainly count as cookies.  But somehow, somewhere along the way, I stopped baking.  Part of it may have to do with not having much of a sweet tooth – I would sooner learn a good pasta sauce than a good cookie – but part of it is also a lack of equipment.  I mean, for other cooking you need a basic set of stuff – pots and pans, spoons, a measuring jug, ovenproof dishes and a colander will get you very, very far in life.  But (as I discovered) they won’t get you awfully far in baking!

I have been doing a lot of South African food lately.  Last week we had a fab lunch at our place – an informal reunion of the people we hung out with at the Oktoberfest this year – and I had promised them a meal of South African dishes.  Now as I have said before, making South African food in London can be tricky as it is often ingredient specific.  A roast isn’t a particularly South African dish – but a springbok roast is, and I challenge you to find a springbok leg in Tesco!! So when it comes to making a South African meal, you have to be quite inventive over here.  Last week’s meal took a bit of head-scratching and waiting for inspiration to strike, but in the end I came up with a menu:

OK, so I may have been a bit ambitious thinking I could whip all this up for seven people, so by the time I got to three courses, I decided to postpone the soetkoekies, but I wanted you to see where they would logically have slotted into my South African extravaganza menu.  (I will do a separate post tomorrow on the meal last week and the recipes – for now let’s focus on the cookies!)

Soetkoekies are of Dutch origin and have been a favourite South African biscuit-tin filler for many years, together with such standbys as crunchies and rusks. The Dutch colonised Cape Town in 1652 and rapidly established their cooking traditions at the Cape, so this is probably one of the older recipes still in use in South Africa.  Unsurprisingly, given their Dutch roots, there is a definite correlation between the ingredients and flavours of these cookies and Dutch speculaas – the only spices left out of the soetkoekies are white pepper and cardamom, otherwise they are the same.  However, in appearance and texture they are quite different: while speculaas is made in shaped moulds, soetkoekies are drop cookies; and whereas speculaas is quite crisp and crumbly, soetkoekies are deliciously chewy. Originally, they used to be decorated with red stripes using “rooi bolus” (a ferri-oxide mixture used as food colouring – probably has an official E-number these days!) as a colouring, which would make sense in light of the decorated speculaas which was traditionally made, but this did not sound like an awfully good idea to me…  So I went for the uncoloured version, tradition be damned!

In the process of baking I discovered just how ill-equipped I am for this baking lark.  I don’t have a food scale, so quantities are guestimated using the principle that 100g of water and 100ml of water are the same (clearly this does not hold true for flour, sugar, etc, but hey, let’s not get technical).  I also don’t have a hand mixer or a food processor, so “cream the butter and sugar” involves heavy arm exercise with the manual egg beater.  I am also feeling a distinct lack of measuring spoons – a teaspoon you can still just about manage to guess, but a quarter teaspoon??  Oh, and as I finished mixing the dough I remembered that I don’t own baking sheets in this country (I hate it when that happens… you know you own something but you forget that you are not in the country where that object is currently residing!).  Hmmm.  Lets grease the roasting pan then.  All things considered, it would be a miracle if anything edible came of my attempt, really!

But to my eternal and pleasant surprise, what I took out of the oven after 15 minutes of baking were some rather delicious cookies! (The pale peaks on top are beaten egg-white that the recipe requires to be daubed on top of the cookies before baking, but I won’t bother doing this again.)  Not having made these before I didn’t really know what to expect, but the smell coming from the oven was really, really promising.  Once they had cooled I tried one – delicious!  They are very moist, chewy cookies, as opposed to crumbly cookies, and had a lovely robust spicy flavour – definitely a Christmas taste.  I think next time I might substitute sherry for the red wine to bring out the boozy flavour a bit more, but the red wine worked perfectly well.  I also liked the chunky almond bits studded throughout the cookies.  So without further ado, here is the recipe for those who want a taste of South African culinary heritage.  This version is from The Cookie Tin but you will find almost identical recipes in most South African cookbooks.

Roll the dough into walnut-sized balls and place on cookie sheets about 2 inches apart. Take heed of this measurement – they spread!

Dab tops with beaten egg white (optional) and bake for 12-15 minutes or until brown around the edges.

Transfer to wire racks to cool.