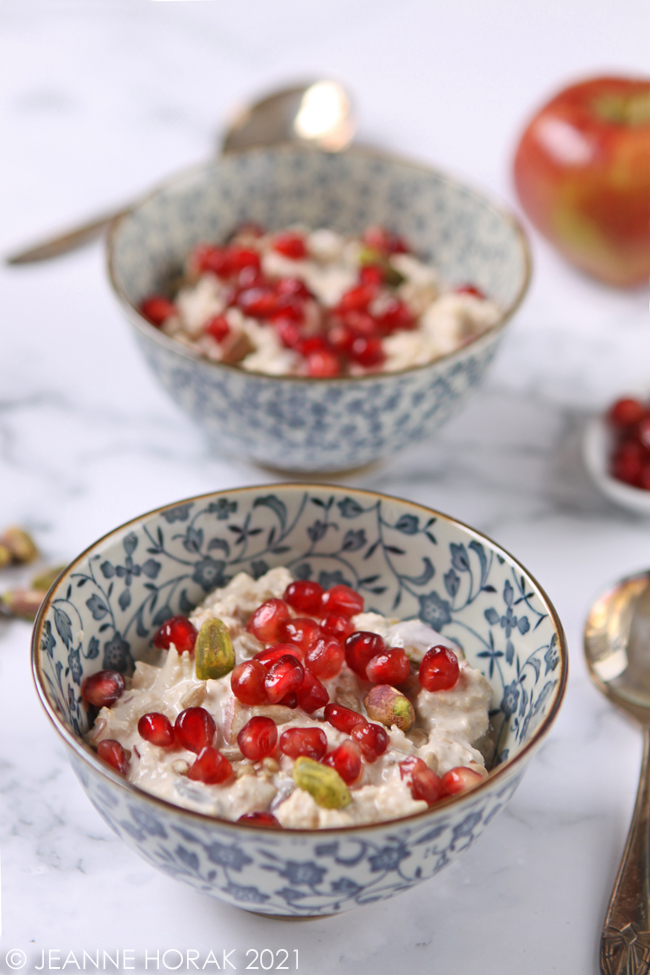 “I am always ready to learn although I do not always like being taught.”  So wrote that master of the nicely encapsulated aphorism Winston Churchill – and how true it is, in light of the events of the past year.  At some point in the future when the current global Covid-19 crisis has subsided to a manageable level, we will all take stock of the impact that it has had on our lives.  For some, the impact will simply be catastrophic – the loss of a loved one; lifelong debilitating side effects from having caught the virus; or the financial loss of a job, business or home and all the spiral that follows such an event. For others, it will be a more general lament about how hard it was to do without restaurants or travel; how challenging it was to have all the family members at home and using internet bandwidth at the same time; and how much they missed hugs.  For yet others, it will be a success story of a company that by chance provided the exact services that a global pandemic required; a lifestyle that was positively transformed by home working; or personal growth prompted by enforced solitude and time for introspection. And of course, a million individual points in between on that spectrum from catastrophic to transcendent. But I think you will be hard-pressed to find somebody that says they learnt nothing from the past year.

A global pandemic that has killed over 2 million people globally was definitely not the learning opportunity that anybody in their right mind would have asked for. But although we may not have liked the teaching method, nor even some of the lessons learned, we had no choice but to learn, and fast. On a prosaic level, we all know a lot more right now than we did a year ago about viral load, how to really wash your hands properly, how vaccines work, what “comorbidity” means, what a virus is (and no, it is not a teensy little bug), what the R-number is and where the unmute button on Zoom is (well, most of us have!).  But we have also learned deeper things, about how our governments respond in times of crisis; about socioeconomic inequalities and privilege; about how often our society rewards the wrong people with high status and ignores those with truly important jobs; and most of all we have learnt things about ourselves. We have learnt how much we really like the people/person that we live with – even more so when we live alone. We have learnt whether our natural tendency is to follow or bend (or break!) rules. And those of us with kids of schoolgoing age have learnt that teachers are real life superheroes who deserve to have their salaries doubled… no, tripled. 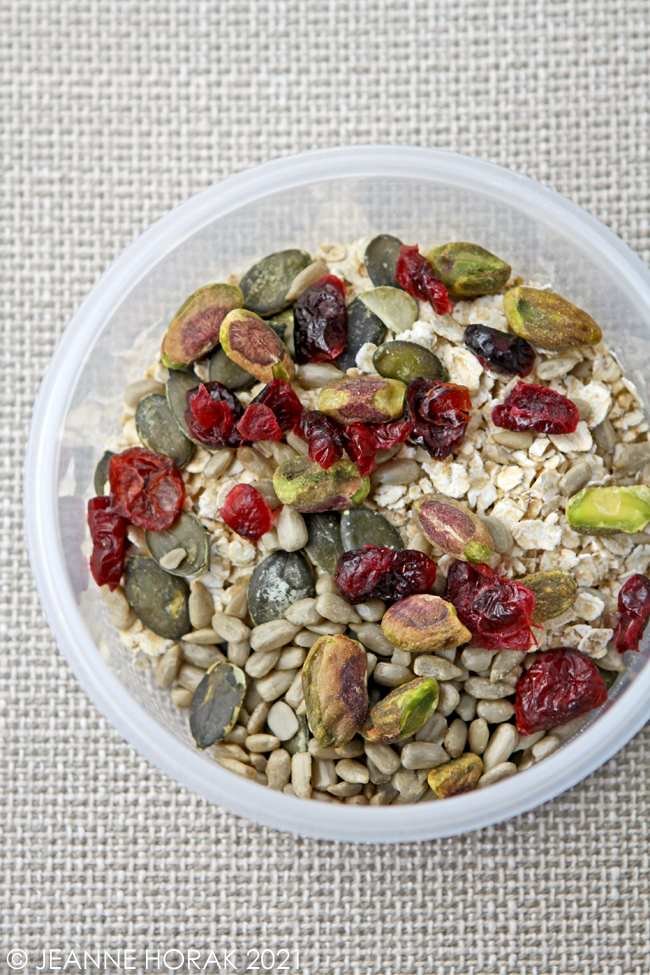 As for me, living alone through this pandemic and its interminable lockdowns has provided ample time for reflection and trying to distil some good habits or useful learning out of a horrible situation. I was happy to be reminded of my general disregard for what everyone else is doing – I did not bake a single banana bread, nor did I do a single Joe Wicks Zoom exercise class. I was pleased to discover that, despite never really aspiring to living alone on a long-term basis, I really do love my own company, and I have cooked for myself as if I were an honoured guest. After my ex-husband and I split up there was a fair amount of pressure (some of it from said ex-husband!) to make a break with the past; to pack up my stuff and move far away to another part of town, preferably another town, or even pack it all in and go travelling, Eat Pray Love-style (!).  My choice to buy a house in the same area where I had lived for 18 years was seen by some as a lack of ambition or willingness to move on.  But being confined largely to the limits of my little house’s four walls, its garden, and its immediate surrounds for the past year has brought me such a sense of peace, happiness and belonging, and taught (or reminded) me that gut instincts are not to be taken lightly.  I have also learnt that I suffer a lot more from FOMO than I would ever have suspected – temporarily completely cured by the lack of things to miss out on! 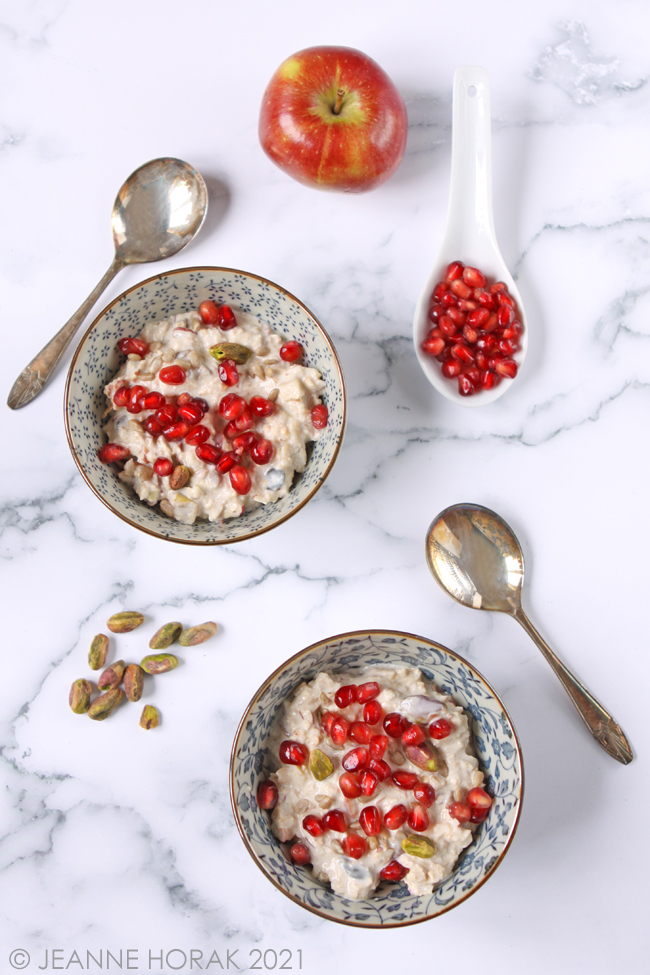 Another surprising discovery was just how much money I spent on invisible things pre-Covid.  Comparing my bank statements pre- and post-March 2020, I can tell you that I spent an inordinate amount of money on my daily Tube commute,  restaurant meals, and barista coffee! I can assure you that I don’t miss commuting or going into the office one bit – but I do miss a proper macchiato made for me by a smiling barista.  And I miss popping into Pret-a-Manger on my way to work and picking up a pot of their outstanding Bircher muesli.  The first time I grabbed a pot was at an airport (don’t miss those!), on my way to a press trip abroad (hugely miss those!) and I think I reached for it because I felt the need to eat something vaguely healthy before the usual press trip culinary overload.  And as it turns out, it was the start of a love affair with their Bircher – so much so that a couple of months into the first lockdown last year, I started experimenting with recreating Pret’s Bircher muesli at home, and I’m pleased to say that I’ve arrived at something very very close to their Bircher and absolutely delicious. 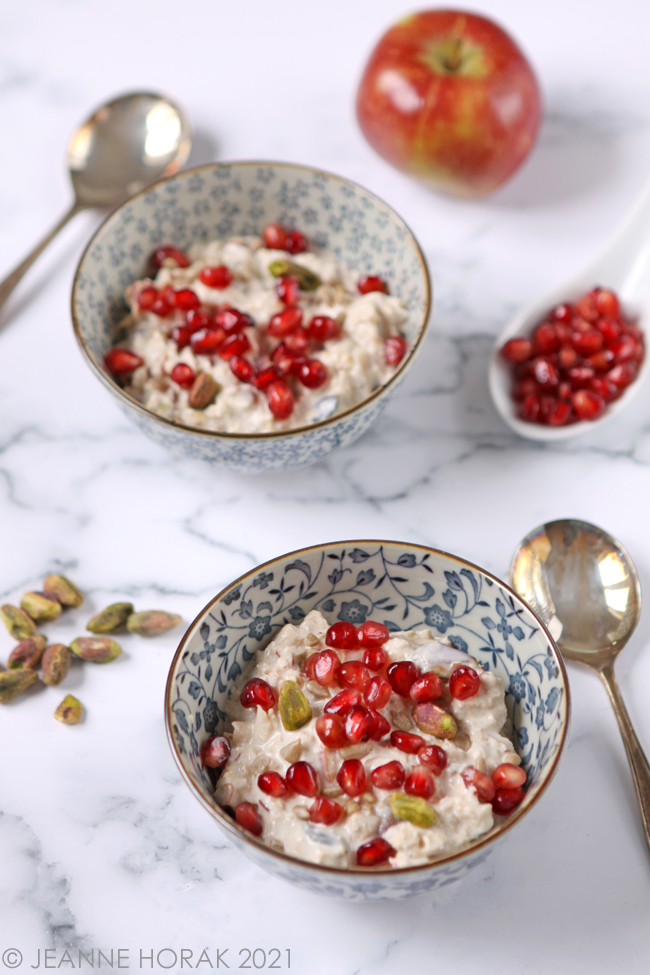 Bircher muesli takes its name from its inventor, Swiss medical doctor Dr Maximillian Oskar Bircher-Benner.  When he was a newly qualified doctor, he developed jaundice and later believed that he had been cured by eating raw apples.  His recovery prompted him to conduct further research into what he considered to be the healing properties of raw foods and in 1897 he opened a sanatorium called “Vital Force” in Zurich where treatments were based on his beliefs.  He believed that raw fruits and vegetables held the most nutritional value; followed by cooked and commercially processed foods; and that meat held the least nutritional value. At his sanatorium,  patients had to give up alcohol, tobacco, coffee and chocolate; practice daily physical training and gardening work; and be in bed by 21h00.  He himself became a vegetarian and extolled the virtues of a raw food diet. At the time, his idea were frowned upon as unscientific quackery and it was only in the 1930s when vitamins were discovered in fruit and vegetables that other scientists recognised the value of his work. Today, much of what he said seems pretty mainstream, but at the time it was revolutionary. 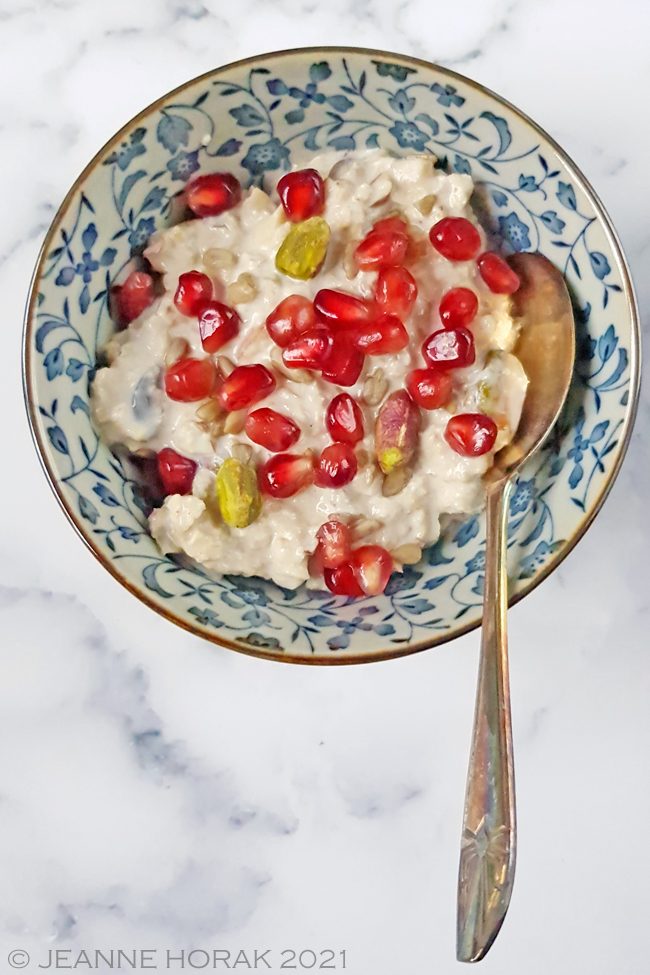 As part of the daily regimen at the sanatorium, he also developed a dish called muesli (literally, “mush”) that was given to each patient before every meal.  This was a far cry from what we today regard as muesli – dry, crunchy and often sweet cereal –  and in fact, because of his belief in the power of raw apples, the fruit rather than the cereal took centre stage.  The dish was apparently inspired by something he was served while on a hike in the Alps and his version called for an entire apple (including the core and seeds!) to be grated and mixed with a tablespoon of soaked oats, some nuts, lemon juice, cream and honey.   This rather odd dish was served before every meal, like an appetiser rather than as a breakfast dish. Today we are still serving and eating Bircher muesli, although the dish has changed over the decades and is now very much a breakfast dish consisting primarily of oats soaked in water or milk overnight before being mixed with grated apple (without the core!), seeds, nuts and yoghurt. What starts out as a rather unpromising and dry mix is transformed into a creamy, delicious and satisfying bowl that can be served really simply, or dressed up with additional toppings. This particular recipe is my best approximation of the Bircher that I fell in love with in Pret but feel free to customise to your personal taste.  For a vegan option, soak the oats in water or non-dairy milk; and for sweetness you can substitute apple juice for half the soaking liquid or add sugar or an alternative sweetener to the soaking liquid.  Please do share your Bircher muesli inspirations with me in the comments! 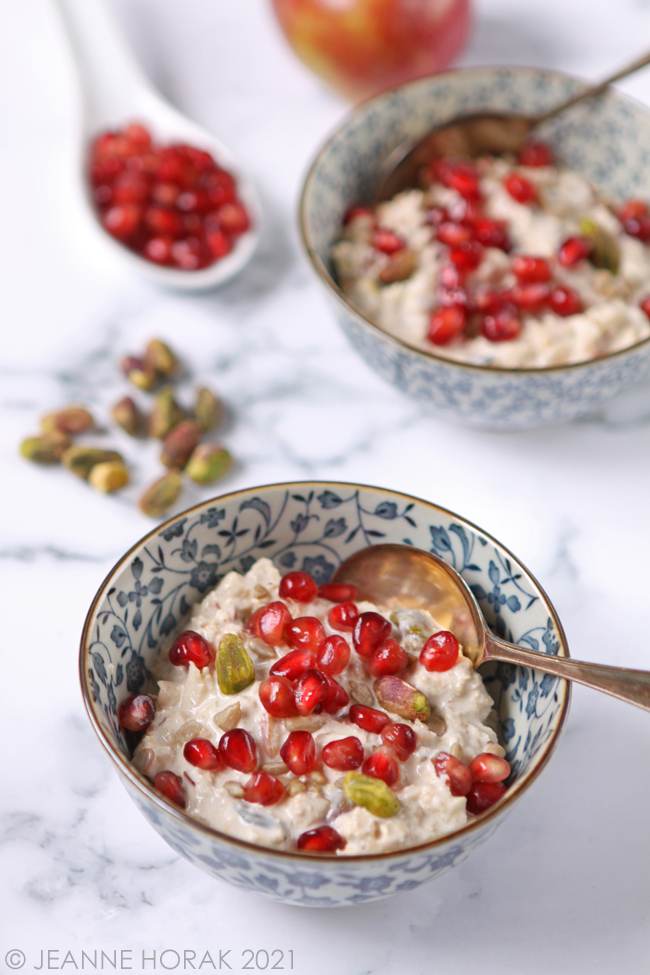 If you like this recipe, why not try some of my other breakfast recipes: 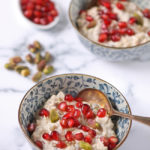 For a vegan option, soak the oats in water or non-dairy milk and use a nondairy yoghurt substitute.  For a gluten-free option, ensure that you buy oats marked as gluten-free (most contain trace amounts of gluten).

For sweetness you can substitute apple juice for half the soaking liquid; stir some soft brown sugar into the oats before soaking; or add honey before serving.

I used Braeburn apples but I have also on occasion used Granny Smith - any apple you prefer will work. Don't grate them until you are ready to serve, otherwise they will brown (or you need to toss them in lemon juice and then adjust sweetness accordingly).

You can experiment with other seeds, different nuts, or different dried fruit. Golden raisins, dried cherries or dried blueberries are my favourites, but feel free to get creative.

Pin this recipe for later! 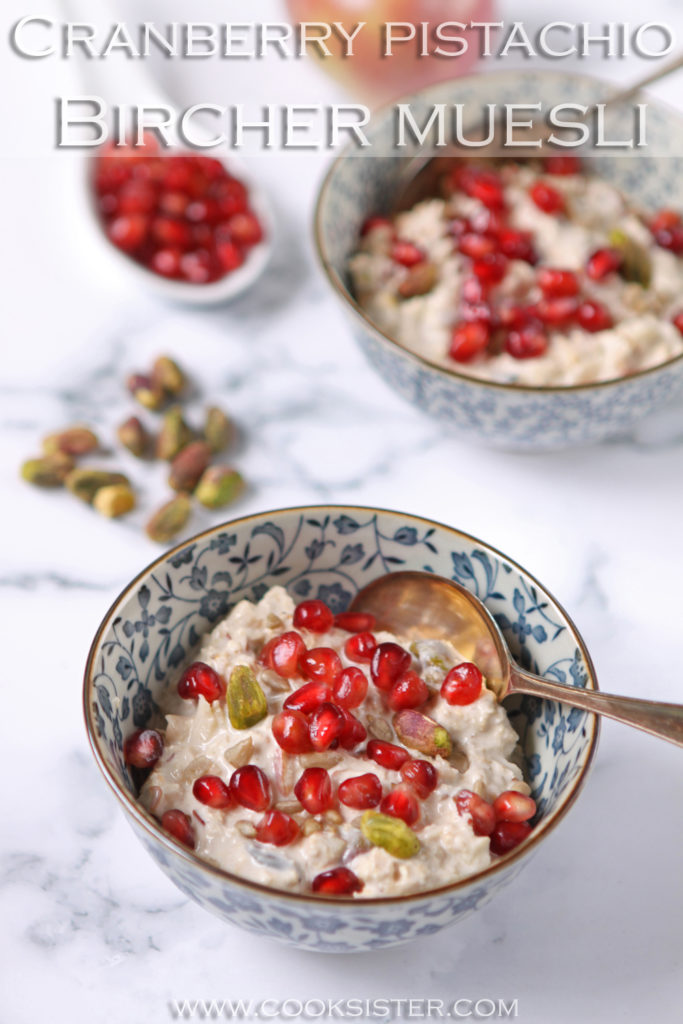