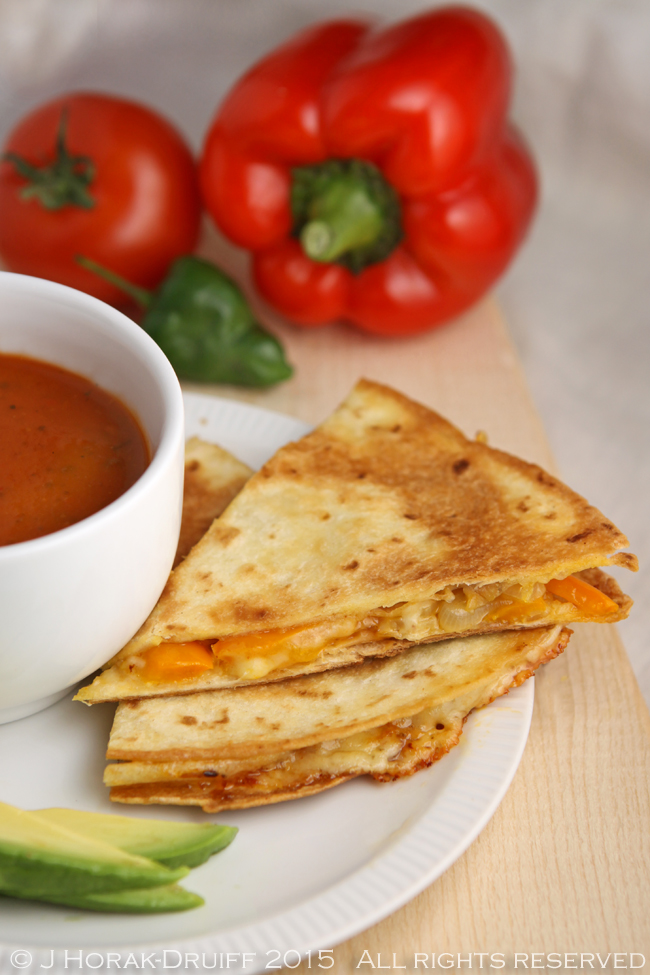 Ask most parents and they will tell you that they think the internet is a double-edged sword.  On the one hand it has revolutionised learning as children use iPads to submit their homework to teachers via e-mail, and access the wealth of information on every conceivable topic that Google unlocks. On the other hand, it has made our brains lazy (who needs to remember facts when you have Google in your pocket?) and opened a virtual door into our home through which all manner of potentially criminal people can virtually peek at or talk to us and our kids. For travellers, the Internet provides a similar quandary.  On the one hand, it has made trip research and booking immeasurably easier (travel agents?  What were those again?).  But on the other hand, the wealth of information and images available online means that travellers know what to expect before they step off the plane, down to the tiniest details. So in the end, almost everywhere we go these days ends up looking “just like the pictures” and the breathtaking novelty of setting foot in a new country or city is hugely diminished.

I say almost everywhere.  But there are still some countries that you can visit that turn out to defy the stereotype; countries where you think you know exactly what to expect, and then you arrive to find things to be refreshingly not like the pictures.  When some friends got married in Mexico in 2005, we were delighted to have an excuse to visit Mexico.  I mean, who would not want to visit the land where all the men wear sombreros and ponchos while snoozing in the midday sun leaning against a cartoon-style Saguaro cactus while a mariachi band plays on every street corner?  Or where smiling, homely mamas are always serving plates of nachos to be washed down with tequila containing a worm.  As it turns out, a lot of these stereotypical ideal of Mexico were untrue or, at best, half true. 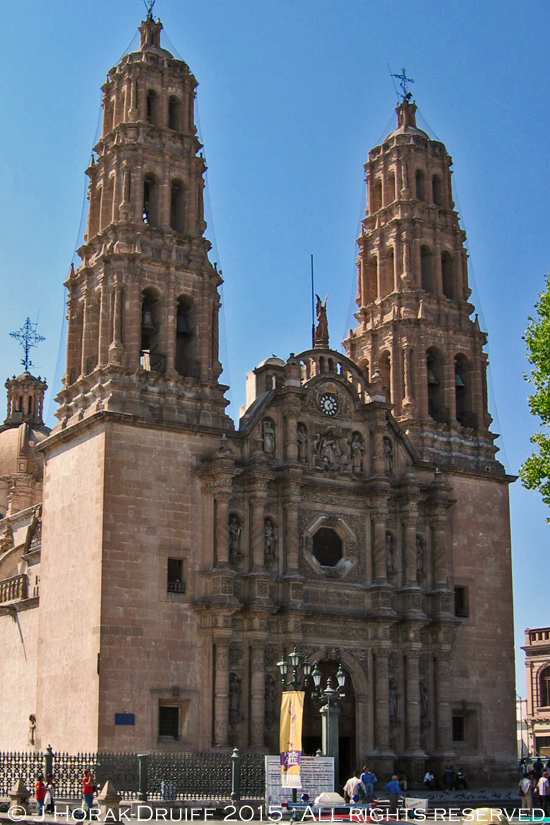 We entered Mexico by doing something that was, in retrospect, probably not such a fabulous idea: to avoid the queues of cars at the border we just walked across the border that divides El Paso, Texas from (the generally-acknowledged-as-dangerous) Ciudad Juarez in Mexico. Everyone including the border guards, were a little baffled by three South Africans on such a foolhardy mission.  The Latino cab driver who dropped us on the Texas side warned us of the many (and real!) dangers of Juarez, and the border guard only stamped our passports (the first South African ones he’d seen!)  after much persuasion by us that we would need this stamp to get back into the US later. From the border we made our way to the bus station where started our Mexican journey in an authentically Mexican fashion: by bus.  We were the only three non-Latino faces on board and as the bus hurtled down the notorious highway from Juarez to Chihuahua, I tried not to look at the bouquets of flowers that punctuated the ditches at the side of the road every few hundred metres, indicating the scene of a fatal accident. On the bus, though, things were convival and we passed the time by snacking on packets of carne secca (the Mexican version of biltong or beef jerky) – not nachos! Once in Chihuahua, the revelations continued.  The men that we saw walking around town or sitting in front of the cathedral wore white Stetson hats – not a sombrero in sight, or a poncho. Another sartorial surprise was the massive popularity of cowboy-style boots in Chihuahua.  There were literally dozens of shops in town selling them in every size, colour and leather imaginable.  We were also quickly disabused of the notion that traditional tequila contains a worm:  “Oh no – that’s mezcal, not tequila!” laughed the locals, rolling their eyes at the gringos.  So it turns out mezcal is a white spirit distilled from any of a number of different types of agave succulent plants,  around the area of Oaxaca.  The worm in the bottle is not actually a worm but the larva of a moth that infests the agave plants, and it is a marketing gimmick, not an ancient tradition (and no, nobody eats the worm!).  Tequila, on the other hand, is distilled only from the blue agave cactus and has to be manufactured in certain designated states (and no, it never contains a worm!).  In Chihuahua, however, there is a different variation on an alcoholic theme:  sotol. Sotol another distilled white liquor made from the desert spoon cactus (also known as the sotol plant), a stem succulent related to yucca and agave. Sotol can only be produced in the northern Mexican states of Chihuahua, Coahuila, and Durango and while one plant can produce 5-10 bottles of tequila or mezcal, it generally takes one whole plant to produce a single bottle of sotol. If, like me, you spent your student years “enjoying” cheap tequila shots and masking the taste with salt and lemon, you will be astonished at the smooth and complex flavours of sotol, especially reposado which is aged in oak barrels before selling. The one part of the Mexican urban mythology  that is spot on is the food.  Yes, there are in fact roadside stands selling tacos on almost every street corner, and yes,  Mexican mamas are extremely good cooks (well, the ones I met!).  I discovered the delights of mole Poblano and mole verde on our visit, complex and flavourful dishes for which every family has a secret recipe passed on from mother to daughter. At the post-wedding party I discovered tacos al pastor, little maize tortillas filled with smoky, tender slow-barbecued pork and pineapple – but I also encountered a lot of the Mexican and Tex-Mex hybrid foods that we know. And unlike the plates of artificially flavoured Doritos covered in plastic melted cheese and bottled salsa that are served in this country, the nachos in Mexico was mind-blowingly fresh. The tortilla chips came crisp and unflavoured and the salsa and guacamole were more often than not made fresh at your table – bright an unadulterated flavours that made me never want to order nachos outside of Mexico again.  The refried beans actually had a texture and a flavour, rather than being just a mush.  And then there were the chillies.  Oh, the chillies. My chilli lexicon extended as far as “fatally hot” and “not fatally hot”, and I assumed that all mexican food was flavoured with the former.  But instead I discovered an entire supermarket aisle devoted to fresh and dried chillies of every flavour and heat level you can think of – truly something for everyone.  My favourite discovery of the trip was chipotles – dried and smoked jalapeno chillies with a deep, smoky flavour and a medium heat that improves practically any dish. Since then, they have become more widely available in the UK as sauces and pastes and I regularly add them to sauces, soups and stews. 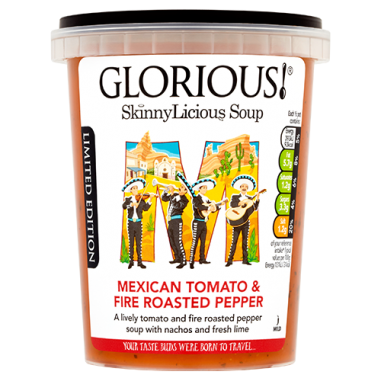 I have written before about Sunday being soup night here at Cooksister HQ.  More often than not, this involves making home-made soup from scratch (have you tried my Thai-spiced roasted pumpkin soup; my French onion soup; my Dutch split-pea soup; or Paul’s famous butternut soup?).  But some nights all you want to do is veg out in front of the TV on the sofa – and for those nights, there is GLORIOUS! Soup (available from most major UK supermarkets). All the soups in this range of fresh ready-to-eat chilled soups fall within the UK Food Standards Authority’s revised lower salt guidelines for 2017; contain no artificial flavour enhancers or colours; and their Skinnylicious range is fully vegetarian (some vegan and some gluten-free) with less than 2% fat and under 150 calories per portion. Now for me, such a virtuous description would usually imply bland and tasteless – but this is definitely not the case with their Skinnylicious Mexican tomato and fire-roasted pepper soup, which is full-flavoured and tasty without being too heavy. To go with this bowl of tomatoey deliciousness, I decided to get in touch with my inner Mexican and whipped up a batch of super-easy quesadillas (pan-toasted tortilla sandwiches) filled with roasted onions and peppers, and a touch of smoky chipotle chilli paste.  The quesadillas were fabulous both on their own as well as dipped into the soup – like taking your tastebuds on a short trip to Mexico! 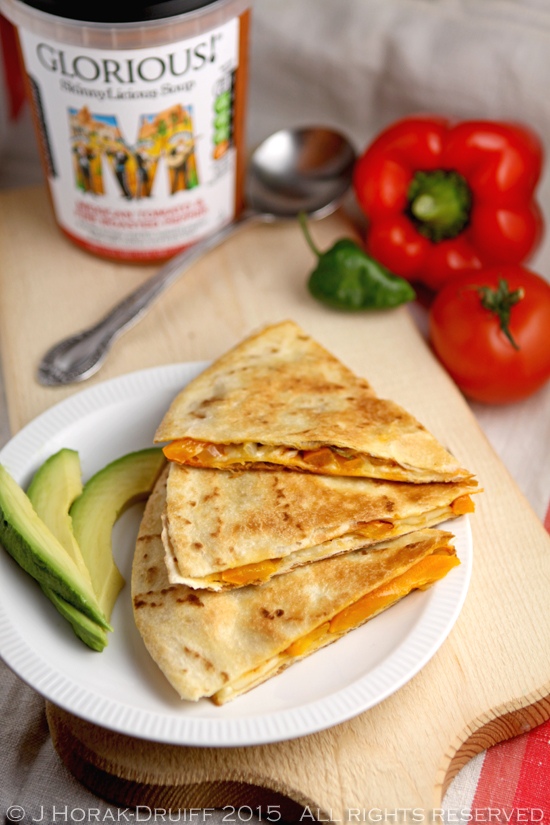 GLORIOUS! Soup are currently searching for an intrepid food blogger who loves writing about food and travel to become their Official GLORIOUS! Adventurer. The winner will embark on a foodie trip of a lifetime to India where they will discover the captivating sights and tastes of Mumbai.  The winner will stay at the serene Sun n Sand, India’s first beachfront hotel, right on Juhu Beach overlooking the Arabian sea, yet perfectly located for all the major attractions of Mumbai. To enter, simply select one of the Glorious global soup destinations and write a blog post about your own foodie #GloriousAdventures there. From Thailand to Tuscany, Singapore to Sicily, there are a wealth of culinary destinations to choose from. Full details of how to enter are available on the GLORIOUS! Soup website and the competition closes on 30 November 2015. Good luck!

For other inspiration for accompaniments to GLORIOUS! soups, have a look at:

Print
Prep time
10 mins
Cook time
20 mins
Total time
30 mins
These cheesy, smoky Mexican quesadillas are quick to whip up and make a perfect light meal together with a salad - or a wonderful accompaniment to a bowl of soup.
Author: Jeanne Horak-Druiff
Recipe type: Entree
Cuisine: Mexican
Serves: 2
Ingredients
Instructions
Notes
1. Flour or maize tortillas can be used.
2. Be as creative as you like with the filling - just remember not to overfill them, and use enough cheese to keep everything glued together.
Wordpress Recipe Plugin by EasyRecipe
3.5.3208

DISCLOSURE:  This recipe and post were commissioned by GLORIOUS! Soup and I was compensated for my time and ingredients to create the recipe and post. I was not required to write a positive review and all opinions are my own.

« Ten tips for your first ski trip
The Gate, Islington »