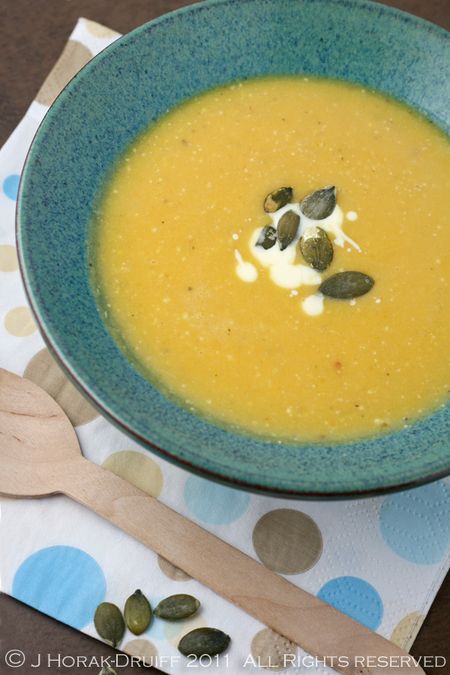 It seems hard to believe now, but when I started this blog, I did not even own a digital camera.  My very first photos were taken using a webcam and involved carrying the food to where the laptop was then then all sorts of acrobatics as Nick held the laptop at an angle where I could see the screen, and I contorted myself trying to manoeuver the camera into a position where it could see the plate, and I could see the laptop screen to check what I was snapping.  Most of the time, just ensuring that the food did not end up on the bedroom floor during this process was a good result in my opinion!

But time passed, the planets revolved, and eventually I purchased my first digital camera (my much-missed Canon Powershot A80) – and the rest is history.  Or a steep learning curve, at any rate. But it still bothers me that I do not have photos for some of my earlier posts.  In particular, one of my perennially popular posts – Paul’s famous butternut soup – went live in August 2004 without a single photograph.  Seeing as I am currently on holiday and not hanging around my computer with lots of time to do extensive posts, I thought this would be as good a time as any to do a couple of posts highlighting old favourite recipes that I have now in fact re-photographed, starting with this fabulous soup.

I am not reproducing the butternut squash soup recipe here in its entirety, but please do go and read the original post – both for the recipe and the story of a dinner party involving a mid-meal delivery of a dining table and an unfortunate meeting of a very large truck and a garden wall. You can thank me later.