There are many things that I wanted to say when I was greeted at the door of the Sofitel St James by a shiny, six foot tall asparagus spear with a shiny purple top.  Most of them are obviously not to be repeated on a family blog, but anyone that knows me can use their imagination! And this was before I had even had a sip of wine… But no, I was not hallucinating – the asparagus spear had some friends waiting inside – equally shiny chillies, some super-sensuous peppers, a giant cherry, and even a sparkly durian were scattered throughout the hotel lobby, bar and dining room.

This somewhat surreal spectacle is thanks to renowned Swiss-French artist Patrick Laroche who is exhibiting his vegetable sculptures at the hotel until 31 October.  Laroche says he was inspired to start making his vegetable sculptures six years ago after he was asked to make vegetable-shaped candleholders for a restaurant in Paris. Having always been fascinated by gastronomy, he set about creating a collection of large sculptures of vegetables. All the sculptures are made either in bronze, or using a polyresin which is then varnished to create a super-glossy metallic finish. My favourites were the peppers – something about the asymmetrical, rounded form lends itself perfectly to Laroche’s shiny medium – and the peas popping out of their pods.  But I have to admit that the red chillies, the cherry and that impressive asparagus were also hot favourites! 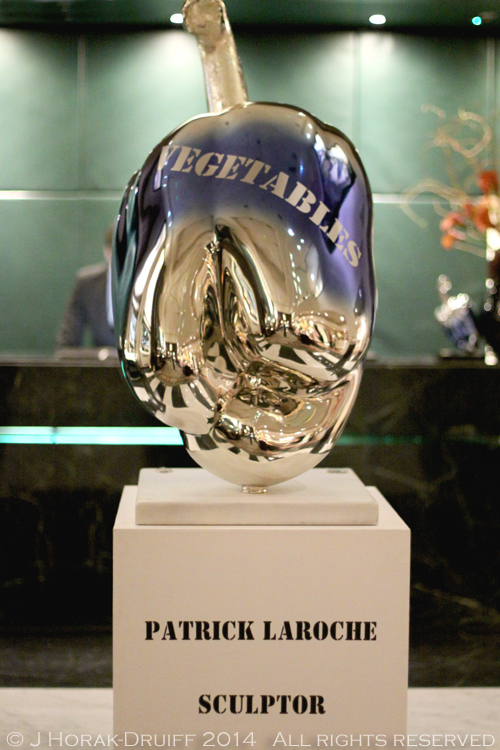 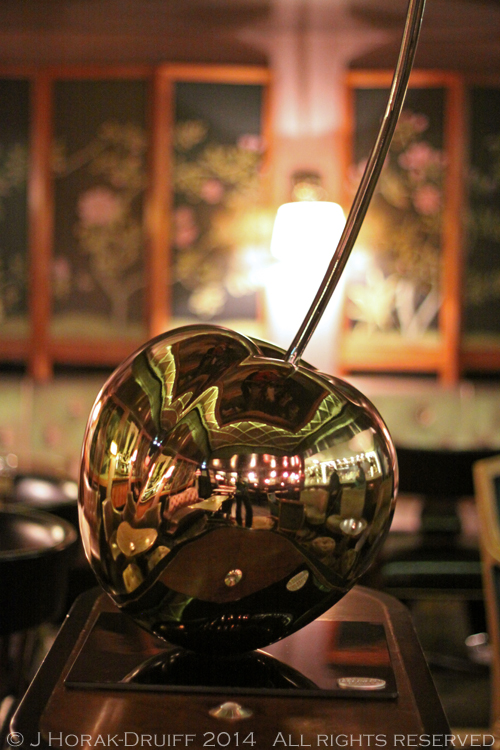 To tie in with the exhibition, the hotel’s restaurant and bar, The Balcon (now Wild Honey), has also created a number  of special culinary dishes and cocktails using vegetables, and it was this menu that I was there to sample. I have visited The Balcon before but always forget what a lovely room it is, with its wall-mounted chandeliers and high ceilings.  Once we were settled into our corner table, the super-friendly waiters brought over the menu and explained which dishes were created for the exhibition.  Determined to try all of them, my companion Ailbhe started with the sweet pea sliders in cornbread madeleines with shallot jam and mint sauce (£5,00) while I chose the braised eggs with spicy chorizo,smoked aubergine and tomato cocotte (£5,00).  Not only did the sliders make a very pretty starter, they were also ridiculously delicious – the peas had been made into little falafels sandwiched between the halves of the cornbread madeleines, and the combined effect of the coriander-spiced falafel, the crunchy madeleine and the sweet jam was just heavenly. We both agreed that my generous bowl of tomato cocotte topped with a perfect runny-yolked egg would make the world’s best breakfast – it’s lightly spiced and as comforting as a hug in a bowl, spiked with cubes of chorizo. 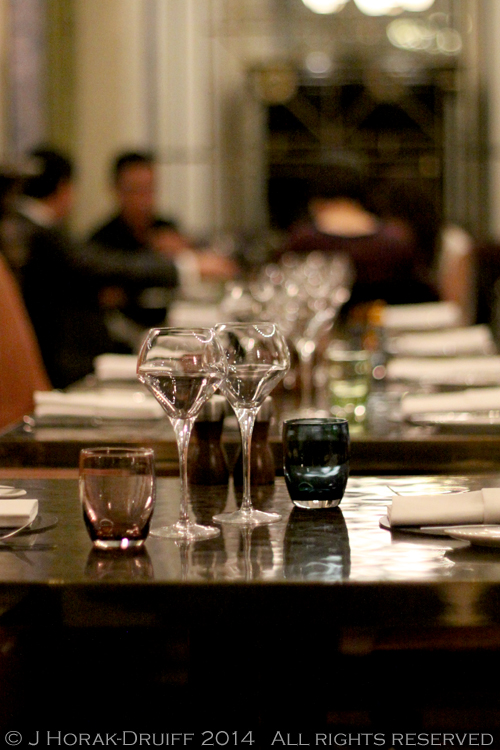 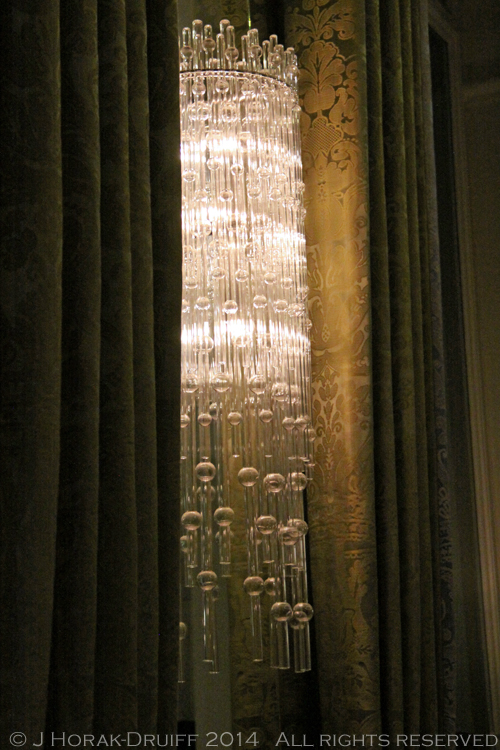 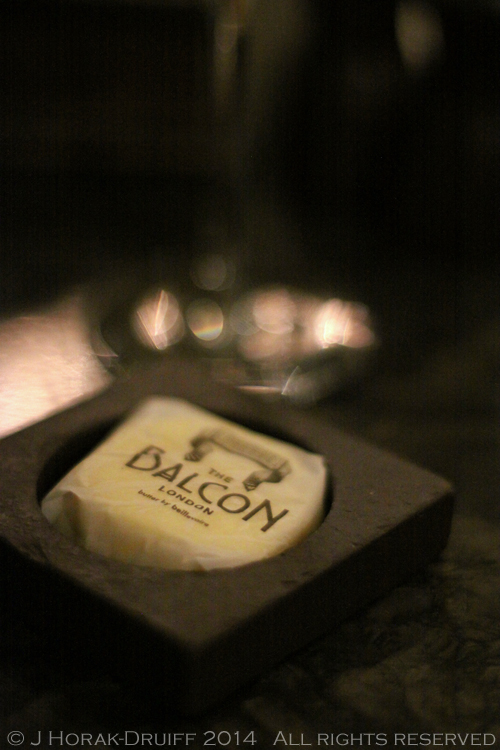 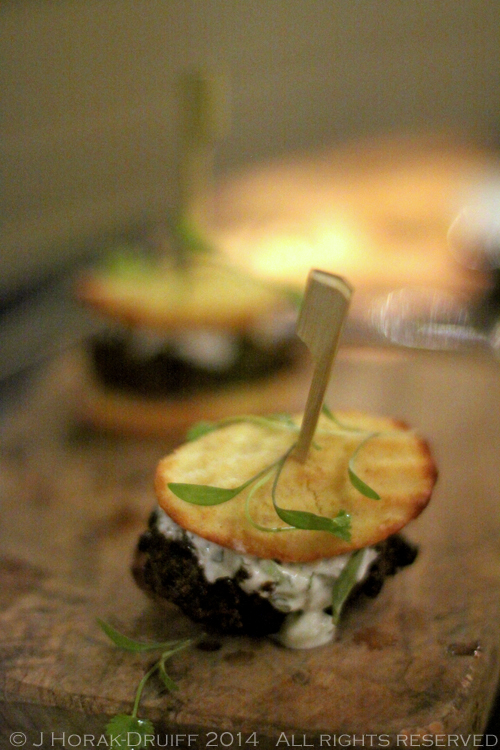 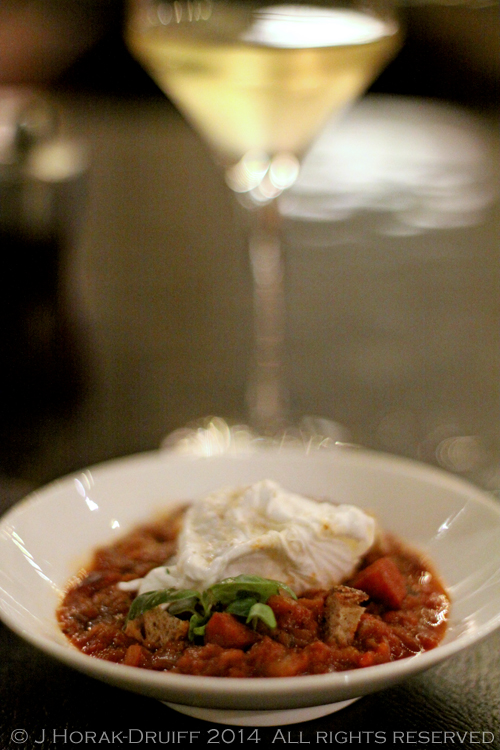 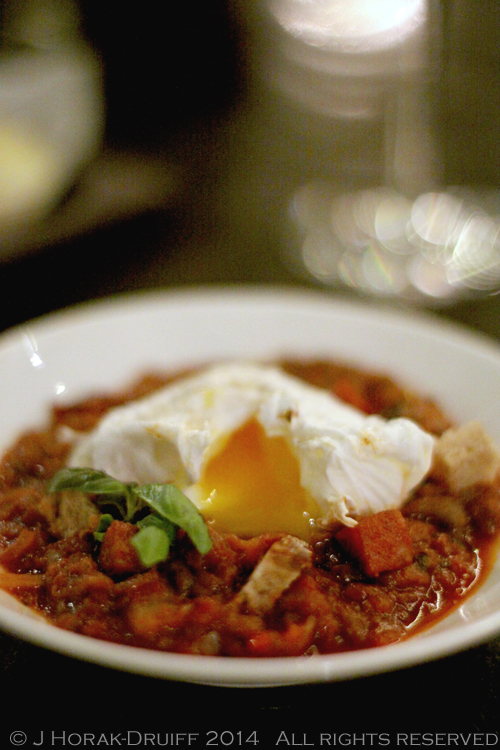 For her main course, Ailbhe could not resist the cassoulet (£21,00)  (one of a number of French classics on the menu) while I chose another of the menu items created especially for the exhibition: stuffed cabbage with Scottish pheasant and foie gras, sautéed girolles, parsnip puree (£21,00). The cassoulet was served topped with a confit duck leg and with a pasty on the side which we were told contained gesiers – a duck gizzard pasty.  Ailbhe demolished the pasty but said the cassoulet was average, with the duck leg being not quite tender enough and the sausages in the cassoulet lacking some oomph – but a perfectly pleasant rendition nonetheless. I was similarly underwhelmed by my main, which consisted of a slice of cabbage and pheasant layered terrine plus some extra pheasant meat, served on parsnip puree with sauteed girolles and broad beans.  I loved the puree, the girolles and the broad beans, but found the terrine to be somewhat bland with only the tiniest morsel of foie gras (I could literally only taste it in one mouthful).  I also found the extra bit of pheasant to be rather dry and in need of more gravy – but the did get bonus points for pretty plating. 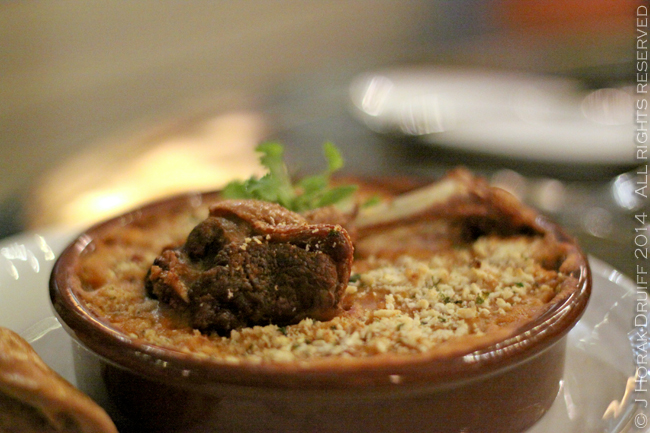 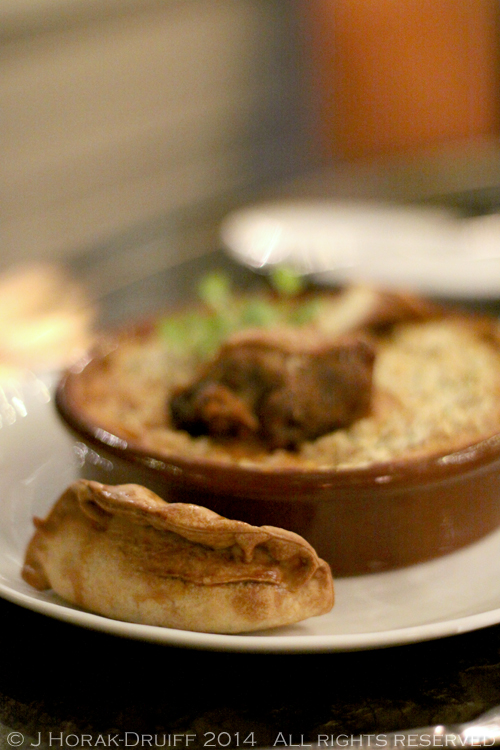 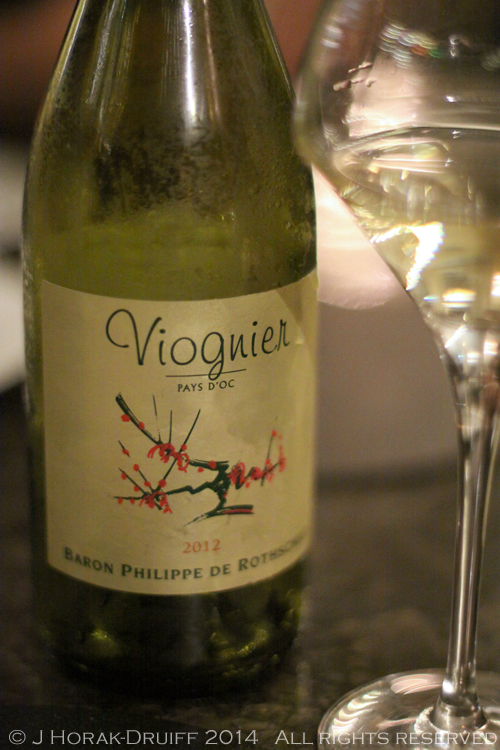 The desserts, happily, represented a return to the form.  Ailbhe chose the dessert created for the exhibition:   a parsnip and maple syrup cake, with clotted cream ice cream (£5.00).  This consisted of thin layers of parsnip cake redolent with cinnamony Autumnal spices, sandwiched with a ganache and served in a pool of maple syrup.  I found the dish rather sweet for my taste (although the ice-cream balanced the sweetness) but it was a hit with Ailbhe and Andrew (who had joined us for post-dinner drinks).  But I preferred the dessert that I chose:  a blackberry financier with green apple sorbet and raspberry coulis (£5,00).  This dish had everything a dessert should have: the warmth of the financier contrasting with the cold of the sorbet; the slight crunch of the financier’s exterior contrasting with its soft interior; and its sweetness contrasting with the tartness of the sorbet and the coulis. And on top of all of that, it was pretty too – like  prom queen who also happens to be  a straight-A student! 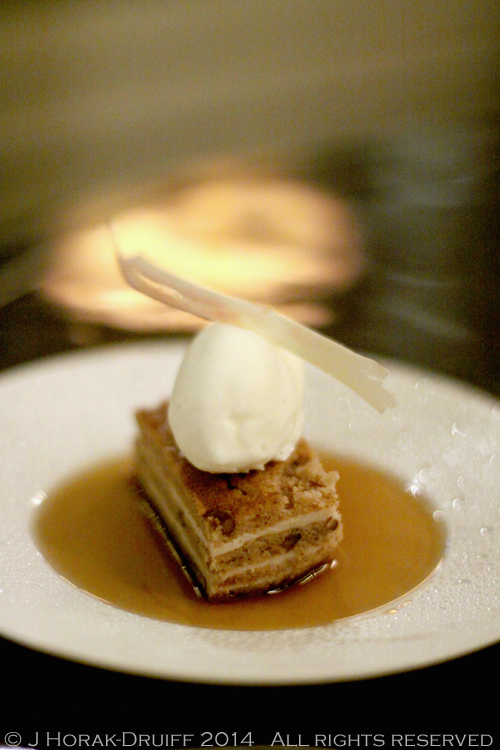 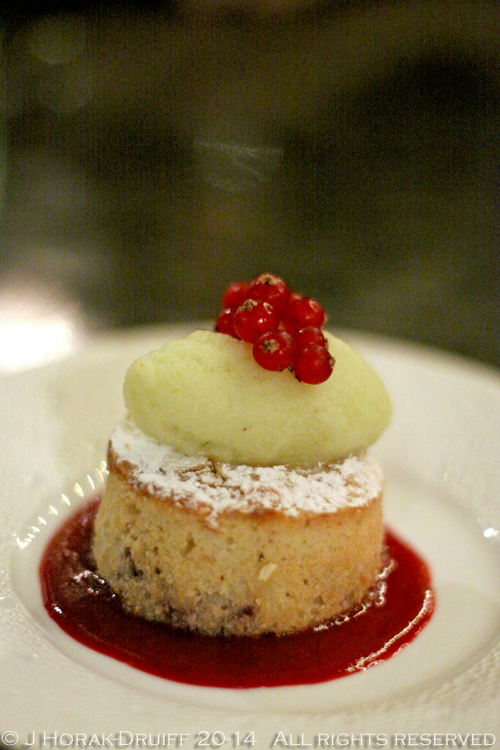 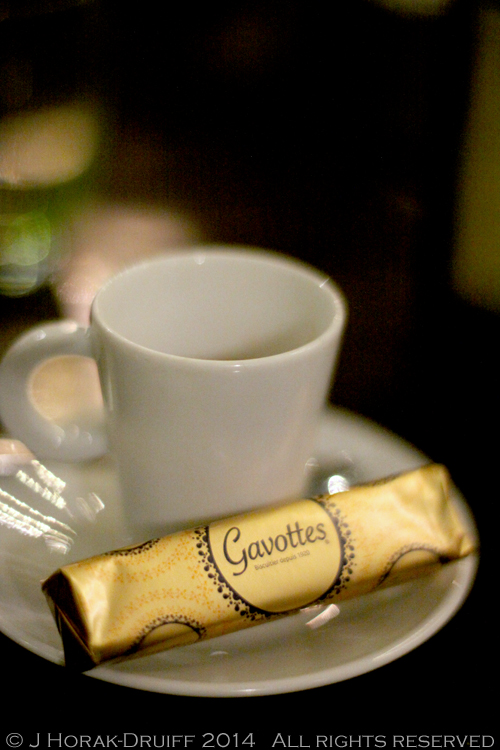 After dinner we strolled around taking more pictures of the rather lovely vegetable sculptures scattered throughout the public areas on the hotel’s ground floor. 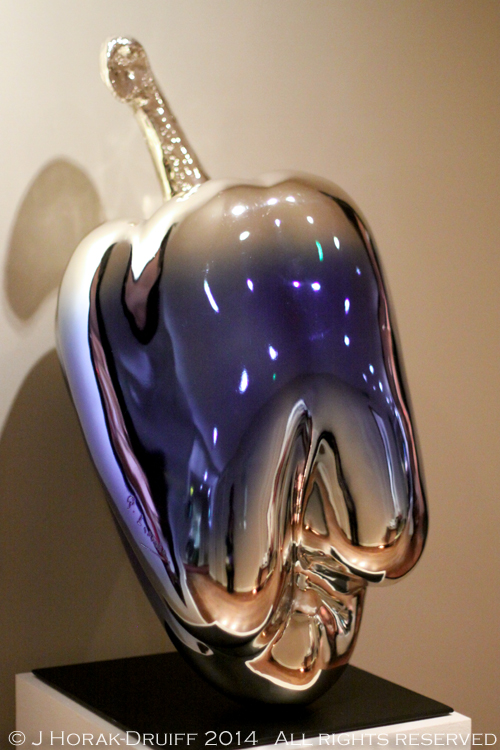 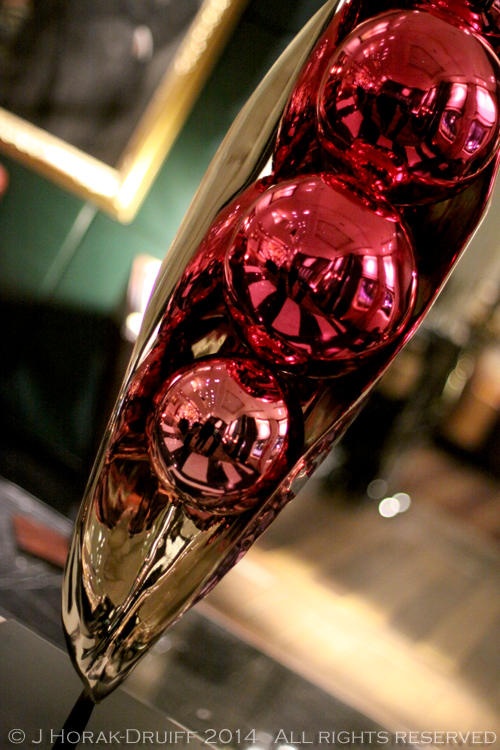 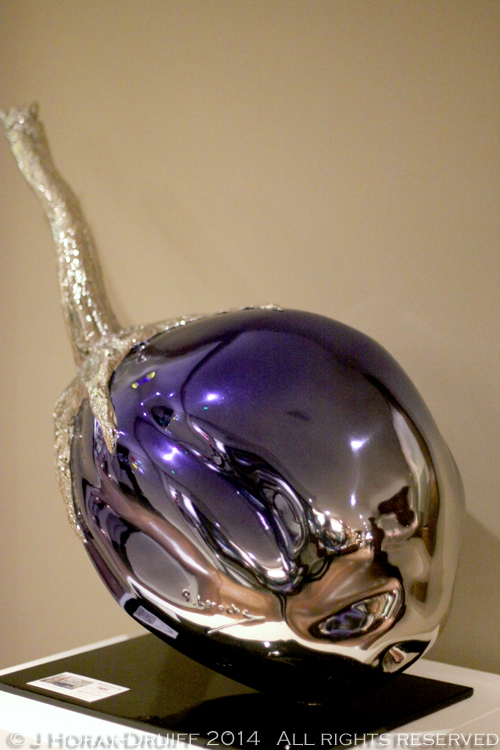 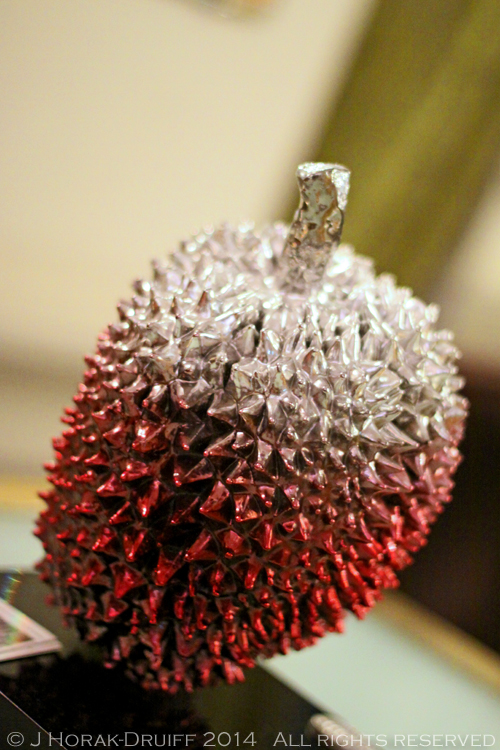 Overall it was a most enjoyable evening in gorgeous surroundings with friendly and professional staff.  I thought the democratically priced starters and desserts were outstanding, although the main courses we chose were not stellar. If I had not been there to taste the special exhibition dishes then I would have gone for their excellent steak which is some of the best in London (as I discovered on my previous visit!).  I loved the idea of  having the sculptures scattered randomly across a number of public rooms, encouraging a nose around the hotel and conversations about who had seen the cherry and where.  If you want to come and visit to see the exhibition, you could dine as we did or take in the Balcon’s excellent value Marché Menu which is perfect for pre- or post-theatre dining.  Alternatively, enjoy a signature Laroche cocktail which the bartender in the hotel’s St James Bar  has created to accompany the exhibition, and which includes ingredients such as heirloom tomatoes, mushroom syrup, cucumber, rosemary and basil ice cubes. The special menu items and the Laroche cocktail will be on offer until the end of the exhibition, on 31 October 2014.

DISCLOSURE:  I enjoyed this meal as a guest of the Sofitel St James but received no further remuneration.  I was not required to write a positive review and all opinions expressed are my own.