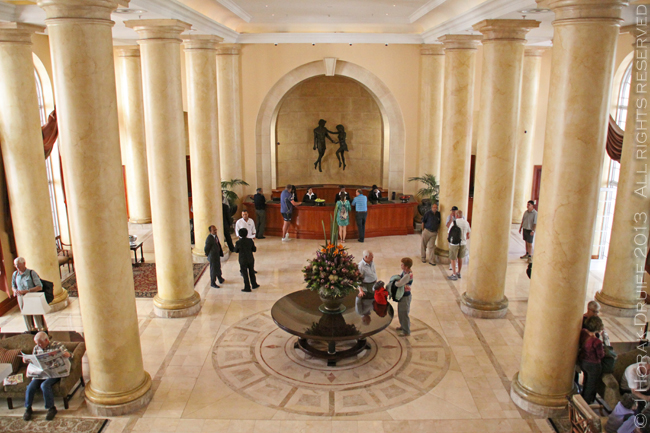 There was a time when the bottom end of Buitengracht Street in Cape Town could possibly have been described as not the most salubrious of places. I know, because I occasionally used to head down there to go to  a nightclub called The Playground back in the day and was always careful to be very vague when my mom asked the exact address of where we were going!  But the years rolled by, and a piece of Cape Town real estate that was previously a little down at heel, hemmed in by freeways and too far from the trendy restaurants of Sea Point, suddenly found it had a new neighbour:  The V&A Waterfront.  This dazzlingly successful redevelopment of unused space in Cape Town’s working harbour which has grown over the years to include restaurants, a huge shopping mall, hotels and attractions including a huge aquarium.  Southern Sun The Cullinan Hotel stands practically on the doorstep of South Africa’s most successful tourist attraction and it has certainly risen to the challenge of such a prize location.

Southern Sun The Cullinan is part of the Tsogo Sun Group which encompasses over 90 hotels and 14 casinos in South Africa, Africa and the Seychelles.  The hotel opened in the 1990s and was extensively refurbished in 2011-2013.  With just shy of 400 rooms, the Cullinan boasts an outdoor lap pool, an a-la carte restaurant (Kelsey’ Grill House), a fitness centre, cocktail bar, beauty, shuttle service, business centre and conference facilities.  The Cullinan’s dedication to customer service is evident as soon as you pull up to the front entrance where friendly staff were ready to help us with our bags and take care of parking the car in their underground garage (they were also very helpful in arranging a late check-out for us the following day).  The lobby is a handsome and imposing airy trips volume space, full of cool marble and classical columns, echoed in the impressive neo-classic cupola that surmounts the building.  The outsize sculpture behind the reception desk references the hotel’s name (the largest diamond in the world was found at Cullinan in South Africa) and the sweeping double staircase opposite the reception desk provides an air of colonial glamour.  Visible through the large doors on the other side of the lobby is the sparkling blue pool, set in a small oasis of calm outside, screened from the nearby roads by palm trees and more columns that magically seem to filter out the traffic noise. 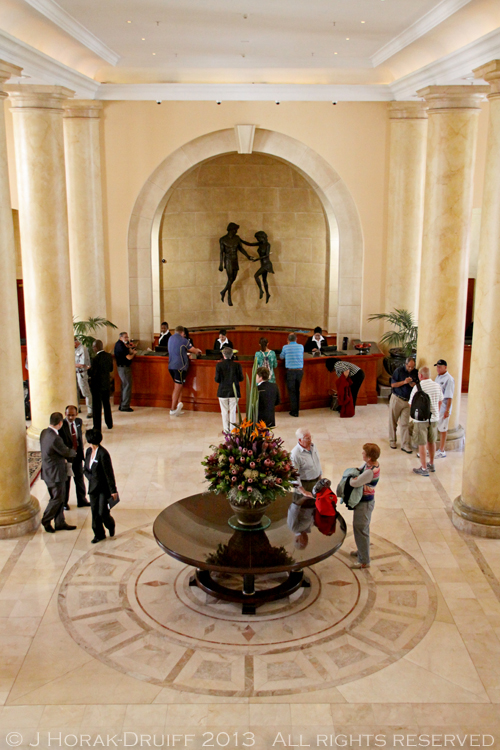 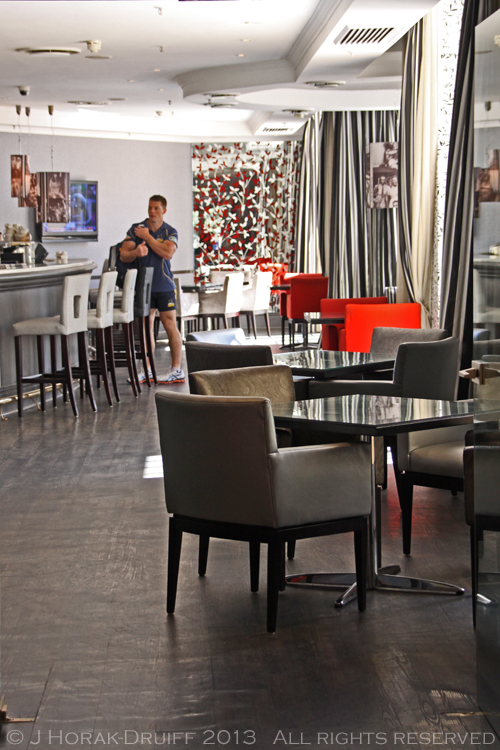 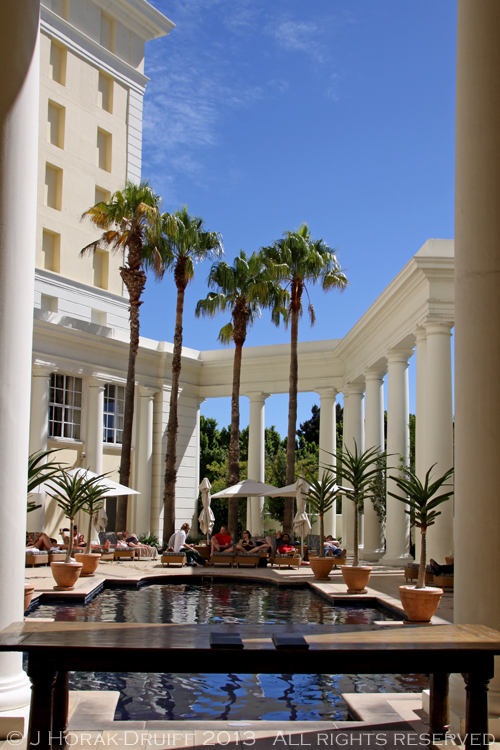 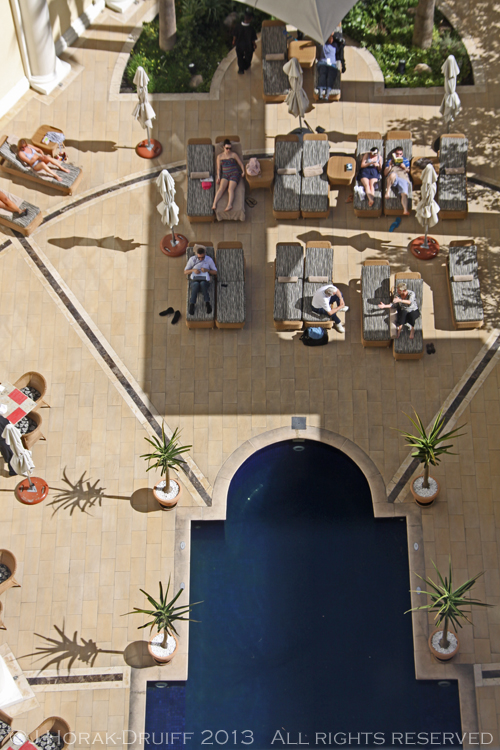 After a quick and efficient check-in process we were shown to our room which was one of the six newly created  suites on the 10th and 11th floors.  I have to admit that the last time I was this quite impressed with the dimensions of a room was when I stayed at  the super-opulent Atlantis The Palm in Dubai.  The first sign that this was a room to be reckoned with was the guest bathroom leading off the lobby (its always fun to stay in a hotel that has as may bathrooms as your house!).  The lobby opens into a spacious living area featuring the best stocked mini-bat I have ever seen as well as a coffee machine, kettle, full-size dining table, lounge area and a TV.  Double sliding doors led from the living area to the generously proportioned bedroom featuring a queen/king sized bed, second TV, chaise longue, writing desk and more cupboard space than I have in my own home. Sigh.  The bathroom was similarly super-sized, with space for a double vanity, bath, large shower and loo within its serene marbled space, as well as a range of delectable Charlotte Rhys toiletries. 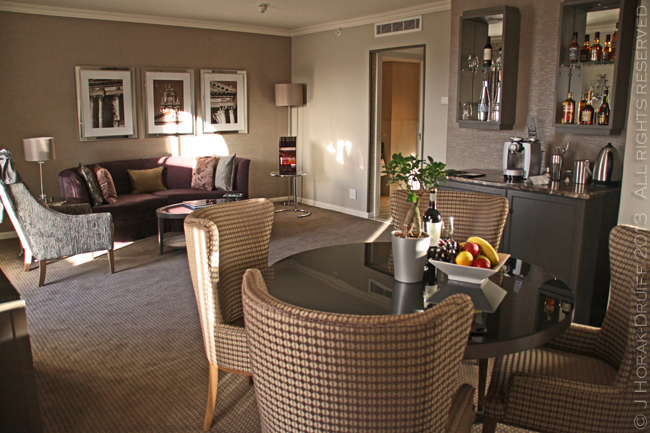 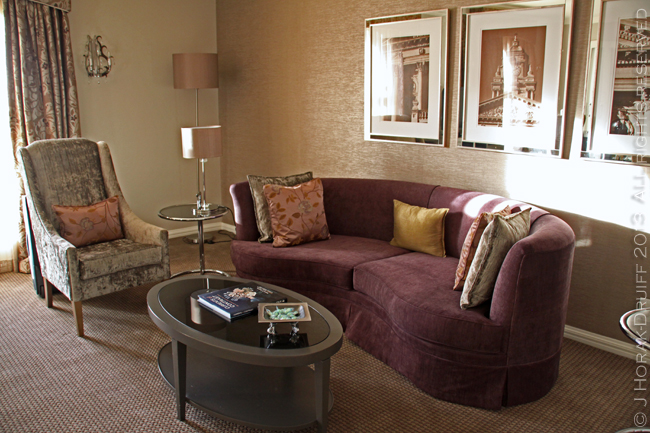 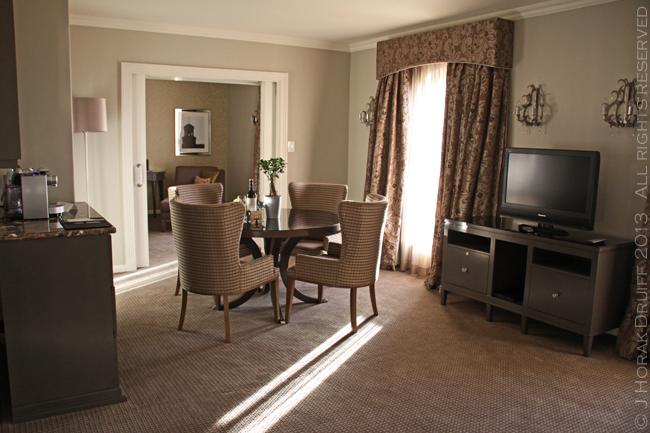 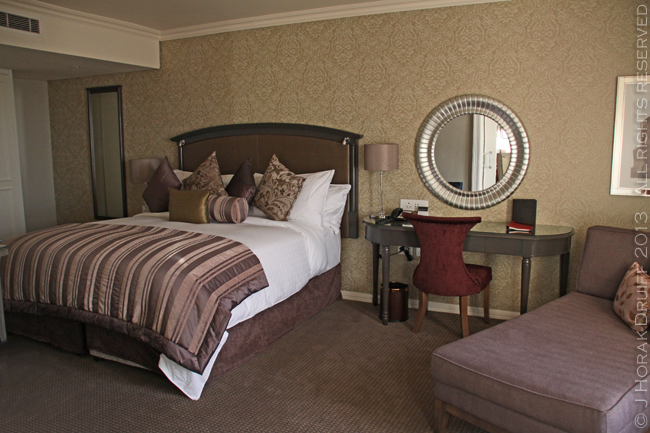 There is no denying it – these suites are glamorous with a capital G. What I loved about the room was that the decor managed to achieve a feeling of glamour without seeming excessive or gaudy. The serene colour palette of taupe and antique gold was accented with shades of dusky purple, and beautiful framed photos of old South African cityscapes and large framed mirrors add to the feeling of opulence.  I also marvelled at the breadth of the mini-bar’s contents: at least half a dozen premier whiskies, and a drawer filled with miniatures of every branded spirit you care to mention.  Another drawer revealed six glasses set into black felt-lined moulded indentations; and yet another drawer revealed snacks like pistachios, Astros and jelly beans, removed from any gaudy packaging and re-packaged in cute glass jars. The only thing we did not find in our exploration of the bar was… a corkscrew – although room service sent one up immediately when we asked, so that we could enjoy our bottle of outstanding Meerendal 2012 Pinotage. 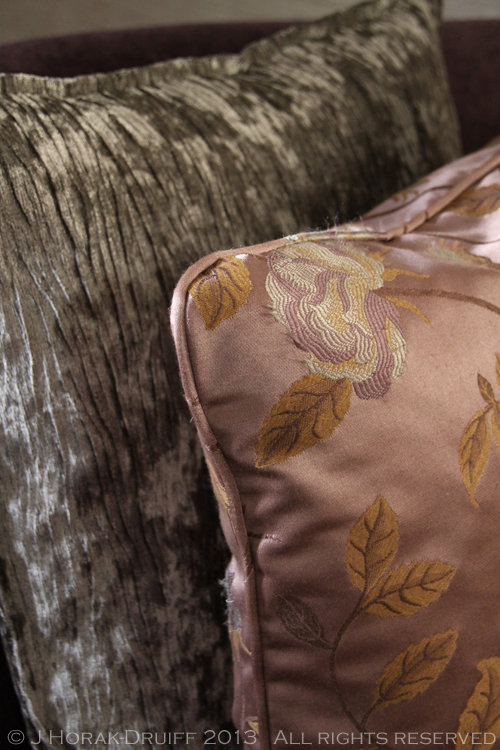 For me, the other major plus of our room was its view.  All rooms have a view either over Table Mountain or towards the Waterfront, which is what we had. The fan walk, built for the 2010 FIFA World Cup, runs right past the hotel towards the Cape Town Stadium  and as luck would have it we had arrived on a night when Bafana Bafana (our national football team) were playing a match.  This means that as dusk gathered, you could see the constant stream of people heading past the hotel and hear the vuvuzelas, and if you closed your eyes you could almost imagine what the spirit must have been like in 2010 – it was the best welcome home present I could have asked for.  Of course, even when there are no football matches, the view over the Waterfront and the stadium itself, or just watching the sunset along the flank of Signal Hill, is glorious. 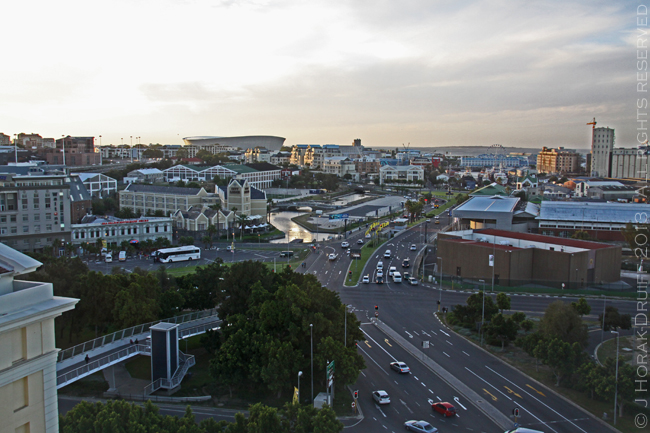 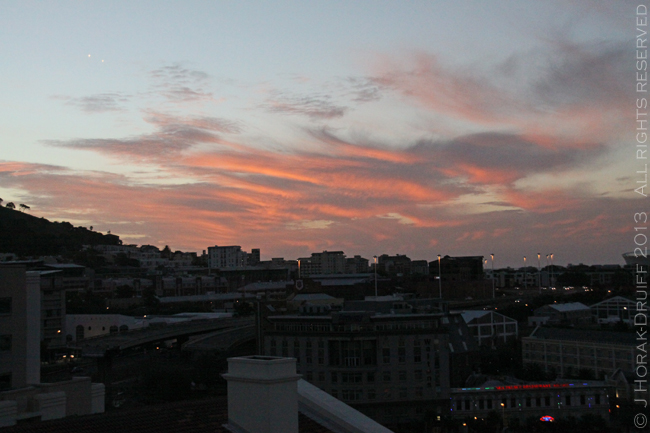 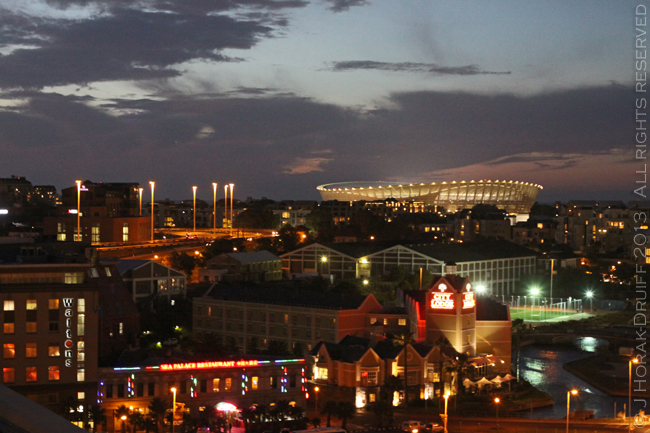 Sadly, we had a dinner engagement and did not have a chance to try out the hotel restaurant, but the following morning we headed down to the Peach Tree restaurant for a spot of breakfast.  I suggest that if you do the same, you should go hungry!  There is a massive  hot selection – eggs, bacon, beans, hash browns, excellent mushrooms and the like, as well as an extensive array of cold things such as breads, excellent pastries, cheeses, cold meats, smoked salmon, cereals, dried and fresh fruit – and a fine selection of teas.  My personal favourite was the special table of vegetarian and gluten-free goodies (which included hummus, a couple of fantastic pestos as well as glorious little cherry tomatoes) and a jug of the best cranberry ginger juice I have ever had – made me feel instantly healthier.  I particularly loved the way the comb honey was served, suspended in a frame that appeared to have been taken straight from the hive .  Gorgeous. 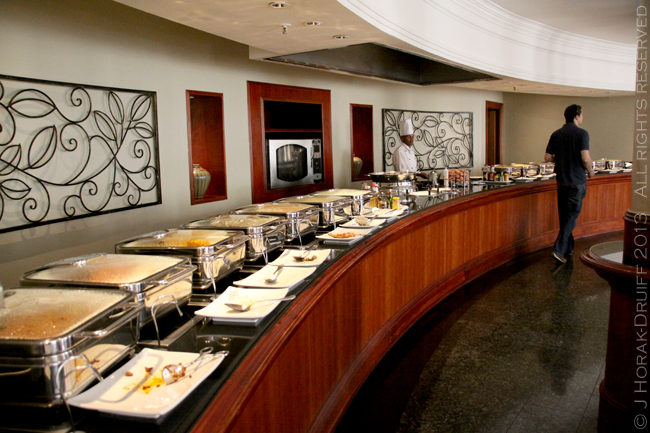 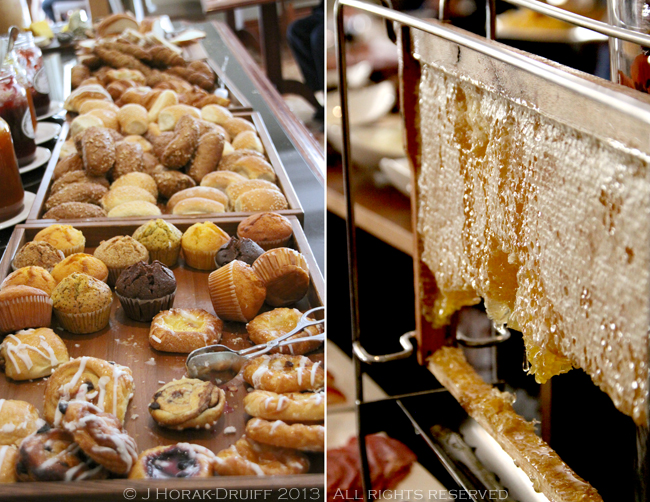 Does all this luxury come cheap?  Of course not.  The suite we had is about R4,800 (about £350) per night – but standard rooms in the hotel start at just R1,400 (about £100) per night, depending on the season, which I think is very reasonable especially if paying in foreign currency. All rooms have coffee/tea making facilities, an electronic safe, hair dryers, air conditioning, 24-hour room service and WiFI – although you pay for it. Underground parking is available (also at additional cost) and there is a valet service to drop off and fetch your car from the garage and bring it to the front door.  Overall, I loved my stay.  I thought the room was glamorous yet tasteful; I adored the views and location; thought the breakfast was outstanding; and I found the staff to be efficient and friendly to a fault. I only wish we had had a little time to lounge by the pool and play spot-the-Brumbie (the entire team was staying in the hotel the night we visited!) .  My only minor complaint is that I do not think a hotel that already charges a fairly high price for its rooms should be making guests pay extra per minute of  WiFi. I understand that if the entire hotel started streaming videos at once, it might have an impact on the hotel’s network, but surely giving each guest one free hour per day would not be the end of the world?  Other than that though, I would wholeheartedly recommend the Cullinan both for the high standard of its accommodation and service, as well as its proximity to the V&A Waterfront, the Cape Town International Conference Centre, and the CBD.

See my Flickr set for a few extra photos.

DISCLOSURE:  I enjoyed a complimentary stay at this hotel but received no remuneration to write this post and all views expressed are my own.

This post is part of a series called Sundays in South Africa.  The series started as a way of providing visitors with some ideas of what and where to eat during and after the FIFA World Cup 2010 which took place in June/July 2010 in my home country of South Africa!  Although the tournament is over now, I still try to post a review of somewhere South African, or a South African recipe on Sundays as culinary inspiration for visitors.  Click here for previous posts in the series.