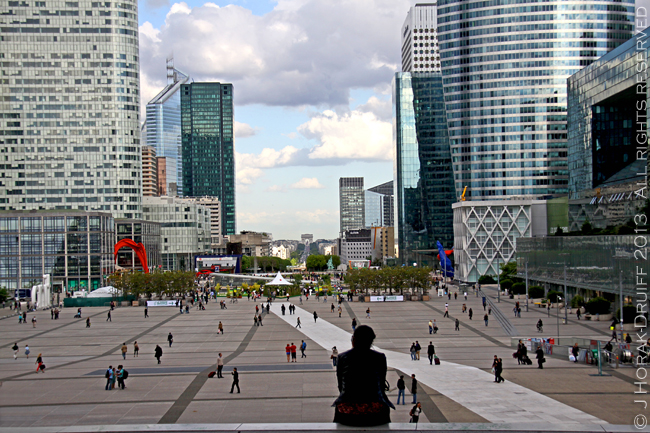 They say you never forget your first trip to Paris, and I have to say that I tend to agree with this.  For most people these memories would include walking hand in hand along the Seine with a lover; or picking up baguettes from the boulangerie for breakfast; or seeing the view from the Eiffel tower or the Mona Lisa for the first time. But none of these perfectly wonderful little vignettes feature in my first memories of Paris. What I remember is doing circuits of the Arc d’Triomphe in one of the approximately eight haphazard lanes of traffic circling the landmark like some sort of demented satellites; and fearing that death by crushing was imminent as two Paris Vision buses tried to converge on the lane that our giant Citroen estate rental car was opccupying.

With this teenage memory of driving in central Paris still firmly planted in my brain, I took an executive decision that when we stopped over in Paris on our way home from our grand road trip through the Vaucluse and Dijon last summer, we would not be attempting to drive through the very heart of the city.  But at the same time, I didn’t want us to stay so far into the sticks that making our way into town seemed like too much trouble, so the dilemma was to find a hotel with easy road access and parking that was still on the Metro network.  Poring over the map of Paris, my eye suddenly alighted on another name that I recalled from that first teenage visit to Paris:  La Défense, the new modern business district to the west of Paris. Back in the late 1980s, my parents had taken us there to see the newly-completed Grande Arche building in La Défense and getting there had involved a number of trains and buses. It was gleaming and modern and refreshingly car free, but it seemed almost deserted.  Fast-forward a couple of decades though and La Défense had become one of the busiest business districts in Europe with Line 1 of the the Paris Metro extended to serve it and the centre of Paris now only a quick Metro journey away.

Right in the heart of the La Défense business district is a 5-star oasis of urban calm and luxury known as the Hôtel Sofitel Paris La Défense, a hotel that prides itself on celebrating innovation in art and design.  The interiors are designed by Jean-Philippe Nuel and showcase a number of artworks from contemporary artists – a clever continuation of the large number of public artworks that you find scattered throughout La Défense. Having just come from the old world charm of the Grand Hotel Le Cloche in Dijon, this was a complete contrast – a totally sleek and modern building in dark, masculine colours, with lightbox art installations in the lobby and not a twinkly chandelier in sight.  Front desk staff could not have been friendlier or more helpful and soon after arrival we were being given a tour of the hotel by the duty manager. As their main target market is business travellers the hotel is relatively empty on weekend (we arrived on a a Friday) and so we were able to see the private dining restaurant, La Tavola, which is decorated in funky “baroque-chic” style in rish jewel shades.  Here, parties can arrange custom menus with the hotel chef and matching wine pairings with the sommelier.  The other dining area just off the main lobby is the airy double-volume  L’Italian Lounge which doubles as breakfast room, bar and restaurant, with stairs leading up to the conference facilities on a mezzanine level. There is also a fitness centre on site which we did not see. 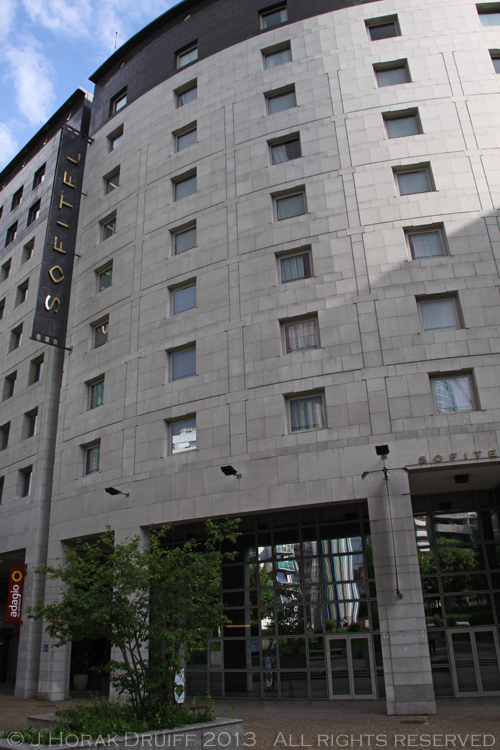 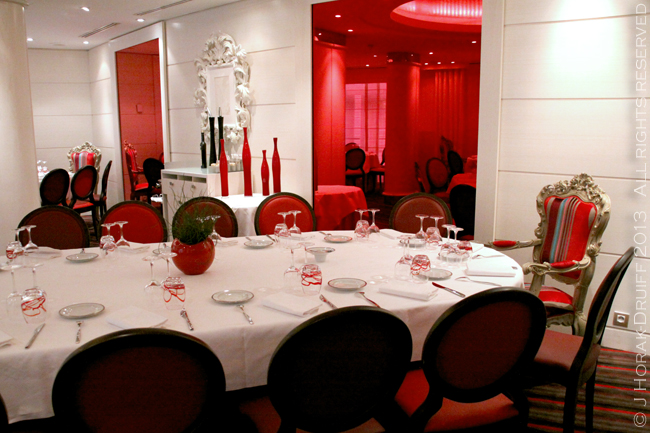 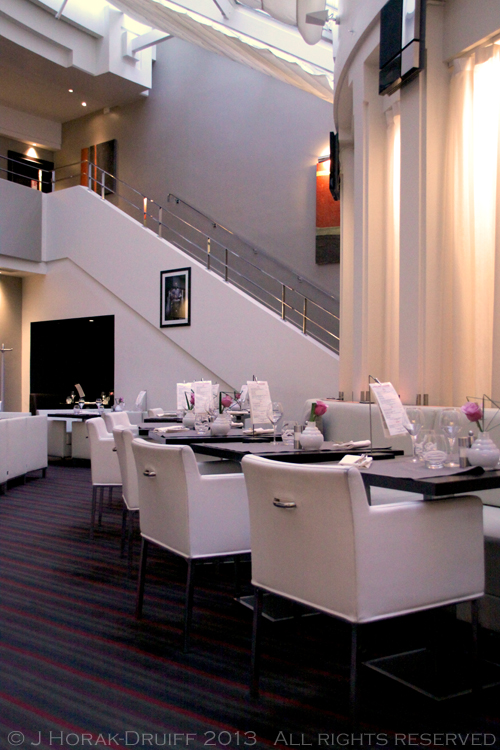 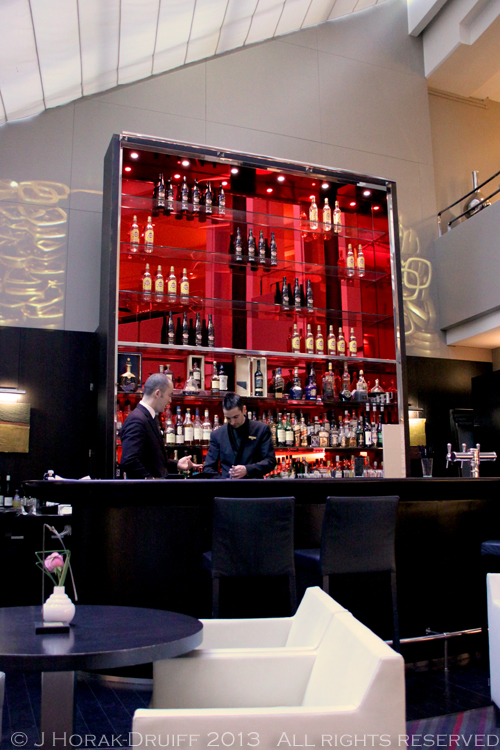 From there we headed up to our room – a Luxury Room which is two categories above a standard room, with a kingsize bed,  a larger bathroom and better in-room facilities, but the same fairly small square window that all the rooms have.  As with the public areas, the room was decorated in rich, dark shades which lent an air of comfort an luxury.  It was a good size and well appointed with a kingsized bed and MyBed™ concept mattress (specially designed for the hotel group and featuring a higher concentration of springs placed at common points of pressure, like your shoulders, neck and back);  a sizeable console with flat-screen TV, power and LAN point, a second phone and a dedicated writing table; an armchair with footrest; adequate  wardrobe space and an electronic safe. There is also free WiFi and all the electronic equipment was top quality like the Nespresso coffee machine and the Bose speakers with an iPod dock – which I loved!  The bathroom was a good size with a bathtub and separate shower with a luxury rain showerhead, and as expected from a 5-star hotel there were robes, slippers and a small toiletries kit.  A nice touch was the large window between the bathroom and bedroom with privacy glass that could be toggled between transparent and opaque, depending on whether the light was on or off in the bathroom/bedroom – so you avoided the usual windowless hotel bathroom while still having an option for privacy.  I’ve also posted a video tour of the room below and near the end of the clip you can see that we were toggling the light switch to show both the transparent and opaque effect! 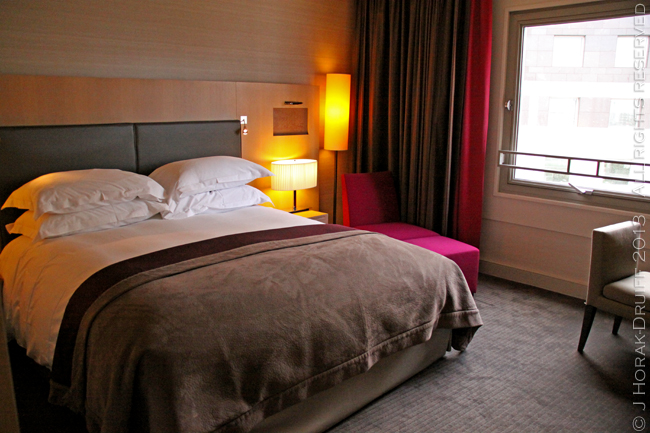 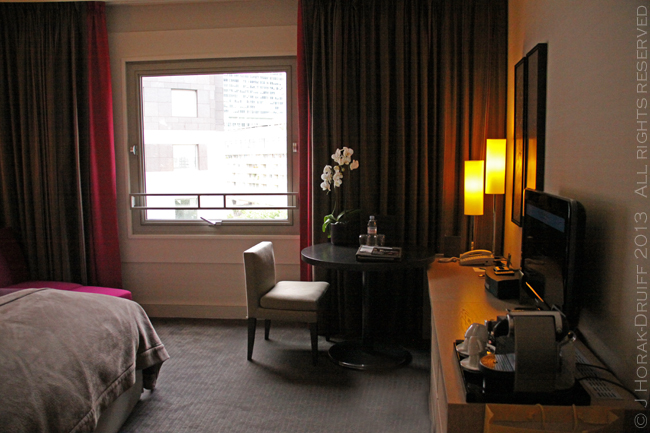 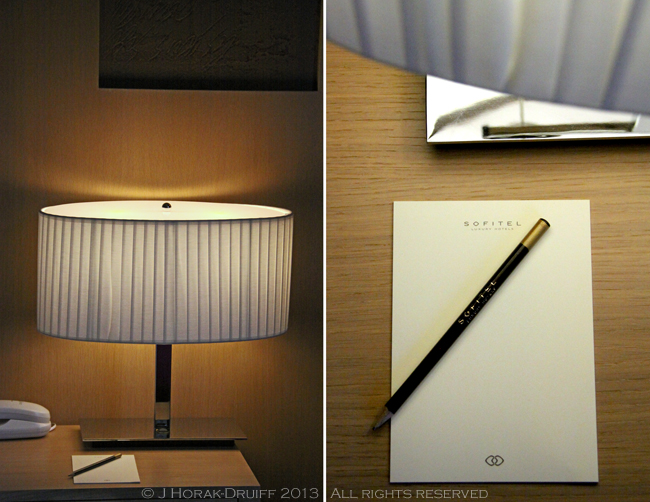 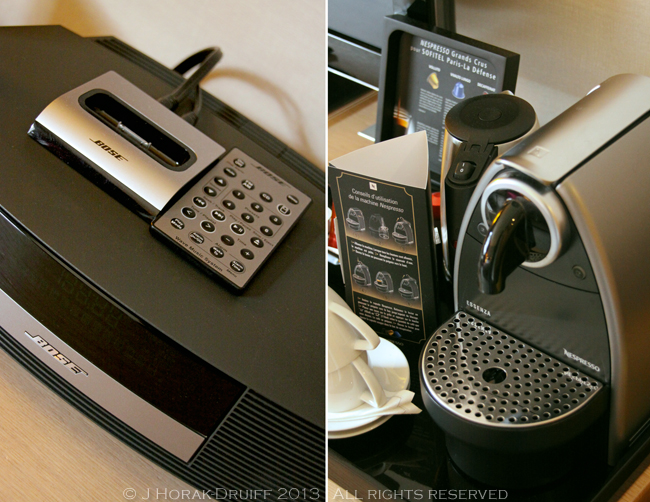 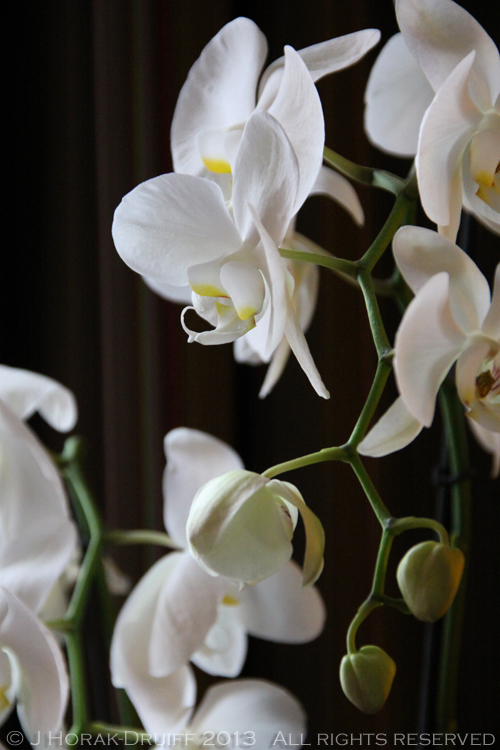 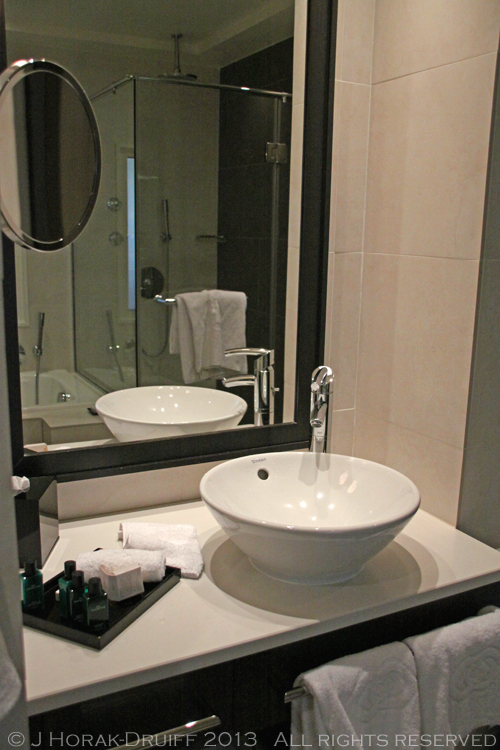 That evening, we were exhausted from our long drive and decided to stay dine in the hotel at the L’Italian Lounge, giving us an opportunity to take a closer look at the room.  The double volume space overlooks a courtyard garden and actually has a conservatory-style glass roof with blinds that can be opened or closed to control the light. Behind the impressively well-stocked bar there is a video screen onto which various arty videos were projected, my favourite being loads of gold Sofitel logos being dropped like coins into a jar until the wall was “filled up”, and then draining away as if somebody pulled the plug out of the jar.  Mesmerising!  The menu is billed as being creative Mediterranean cuisine and there is a cocktail list featuring various signature cocktails featuring specialty vodkas.  Bar snacks that came with the drinks were excellent – juicy green olives; chile peppers stuffed with goats cheese; and semi-dried tomatoes in olive oil. The food, however, was a bit of a hit and miss affair. Nick started with seasonal white asparagus from Landes with a Hollandaise style creamy dressing and Rostello ham (€23); while I had a sort of deconstructed eggs Florentine with colonnata bacon, cavolo nero and a soft-boiled egg (€19).  Both of these were delicious, even if the portions were on the mean side for those prices.  For mains, Nick ordered roast Challans chicken leg & breast served Basque style, on a concasse of peppers & tomato (€38); while I chose the grilled cod served with a carrot “tatin”  (€33) and we shared a teensy salad of mixed leaves with a creamy balsamic dressing.  Nick won this one hands down – the chicken was moist and tasty and the peppers were as tasty as they were colourful.  My fish was not only a tiny portion but had the tell-tale tang of ammonia that, erm, vintage fish gets.  The carrot “tatin” (the same size as the fish!) was not at all tart-like as expected but a surprisingly sublime carrot and potato Dauphinoise – both vegetables sliced paper thin and baked with cream.  I would gladly have traded my sliver of fish for another portion of this.  For dessert Nick had the classic crème brûlée (blameless) while I seem to recall I had some sort of deconstructed gingerbread spice tiramisu – which was nothing like a tiramisu but came served with a shots of utterly wonderful sauce – it might have been salted caramel.  We finished off the evening with a signature cocktail each, but these were in the region of €20 each which my niece (who lives in Paris) pronounced to be a hilarious price to pay in a hotel that’s not even in the centre of the city. 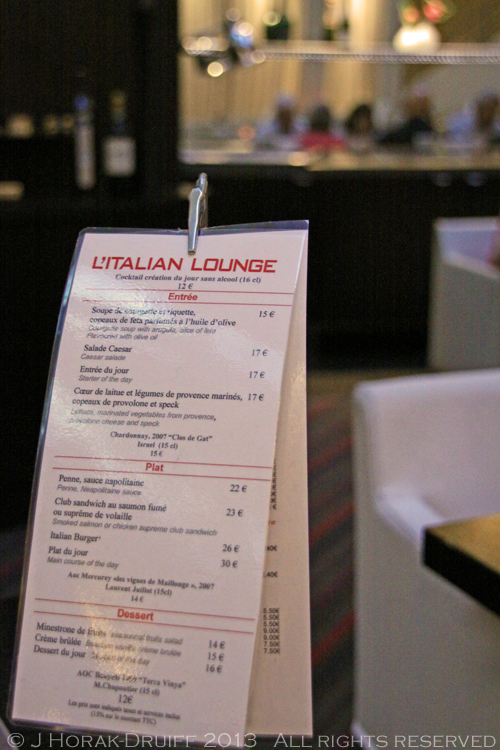 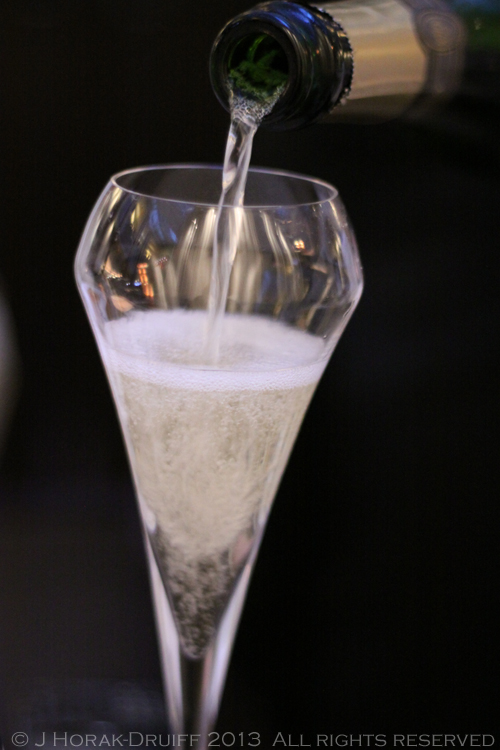 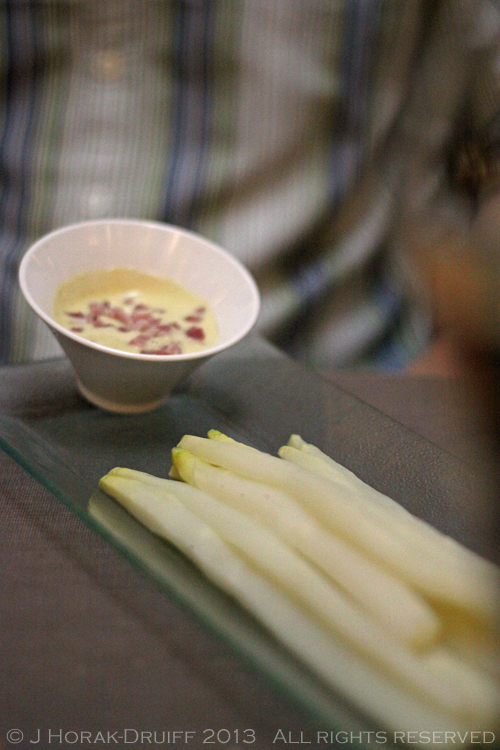 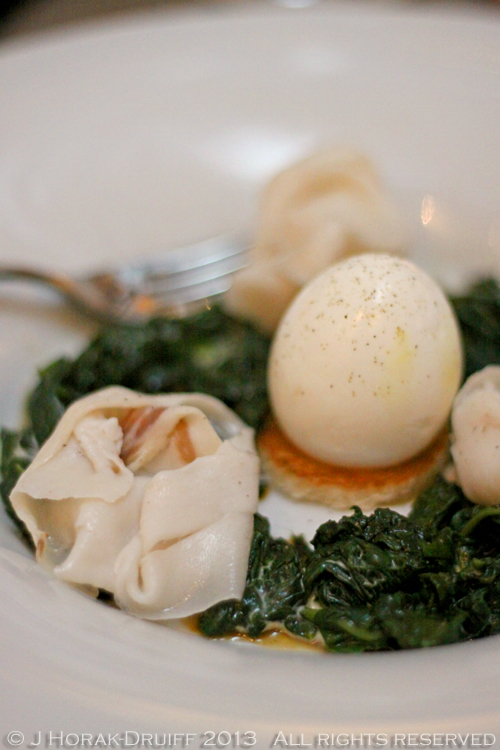 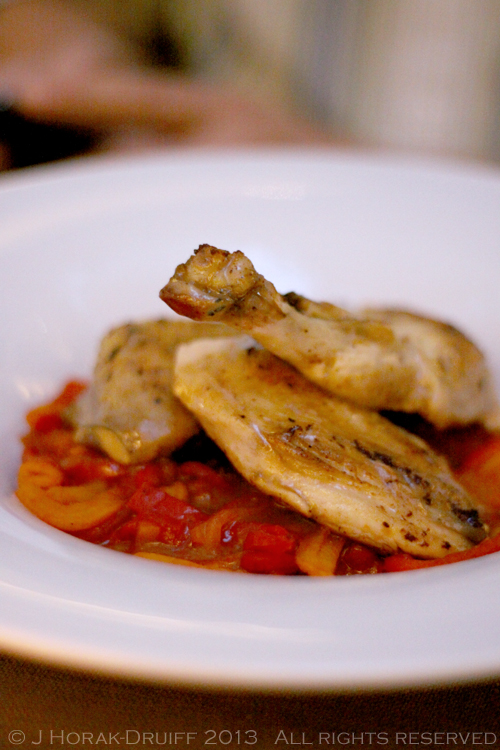 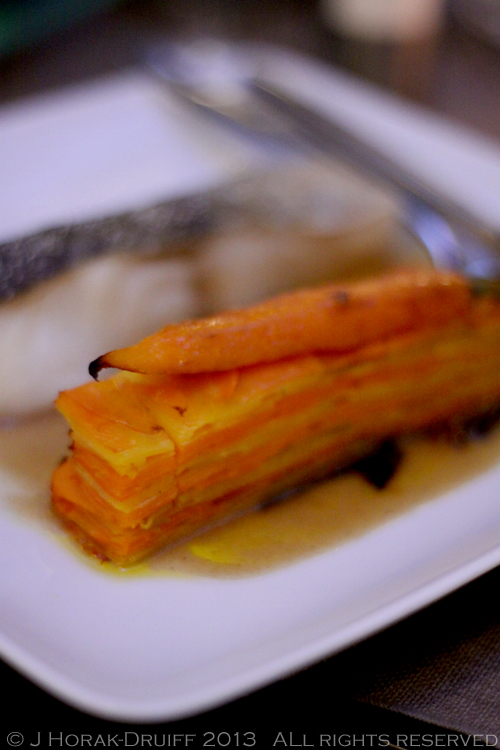 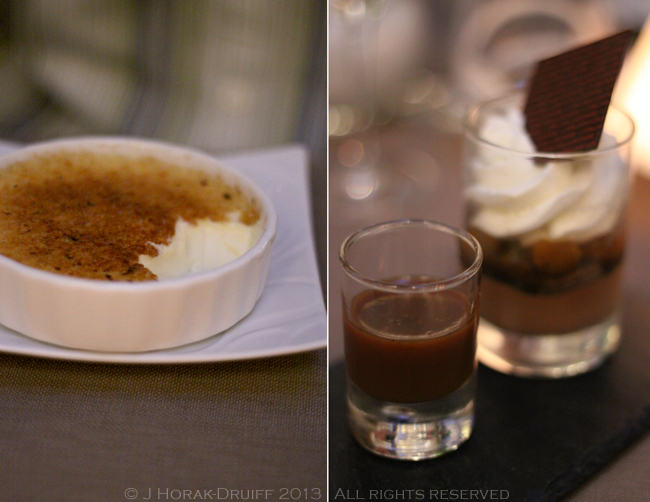 Both mornings that we were there we had breakfast in the L’Italian Lounge and this was lovely – it always makes a difference starting the day in a bright and airy room rather than a subterranean generic hotel breakfast room. Coffee was fresh and excellent and there was a good selection of teas, tisanes and fresh juices. Pastries and butter were excellent (as you’d expect in France!) and there was a good selection of other continental breakfast options available on the buffet, ranging from fresh exotic fruit to ripe little cherry tomatoes, paté, cheeses and cold meat. Hot eggs and bacon were also available for the Full English Breakfast addicts. 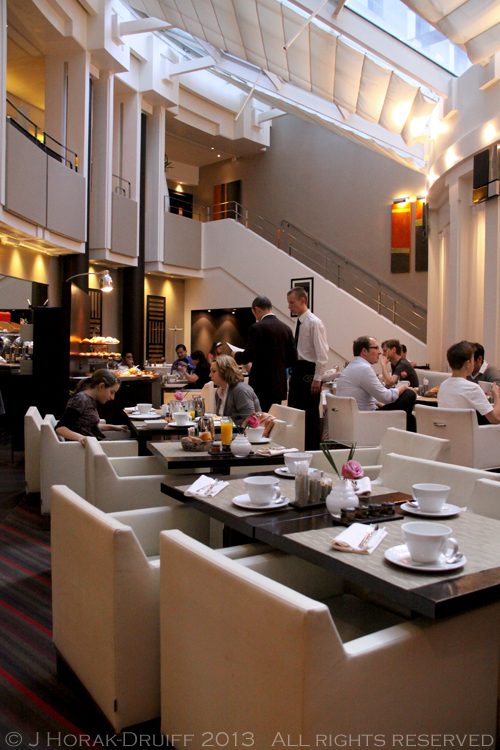 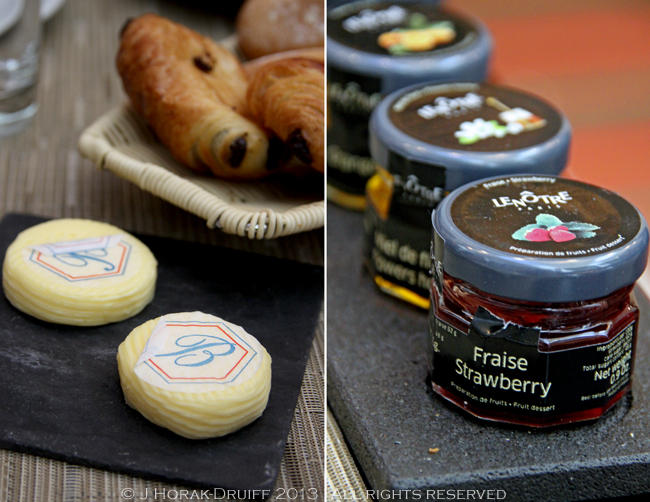 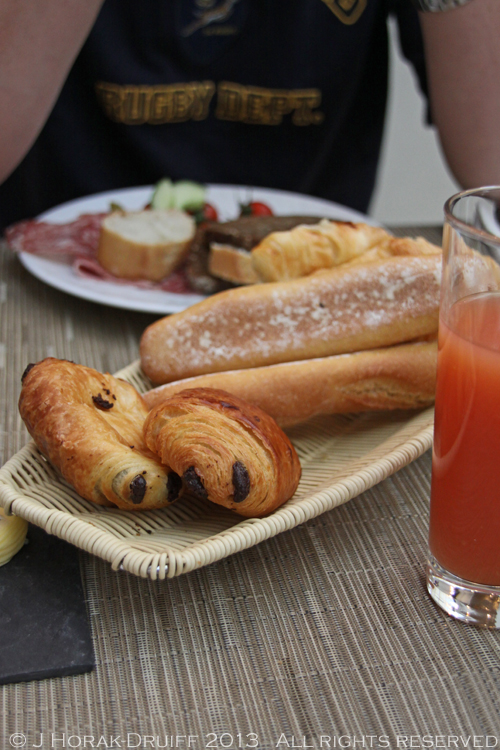 Classic double rooms including breakfast start from €320 per night; Luxury double rooms like ours from €420 and suites from about €500 per night. The hotel offers underground valet parking and although La Defense can be a little tricky to navigate, it’s not congested like the centre of the city and driving there is far lass stressful.  Step outside the hotel and you are in a massive, safe, clean business district full of fascinating public art that is tranquil over the weekends, and also houses a massive shopping mall (one of the few that is open on a Sunday in France).  There is not much around in terms of eating and drinking, but the closest Metro station is a 5 minute walk from the hotel and whisks you into the heart of  Paris (the Arc d’Triompe is only 4 km away as the crow flies). The prices are approximately what you’d expect of a 5-star hotel and both the excellent staff and our plush room certainly did make us feel cossetted (that bed…!).   The dinner, as I said, was hit and miss and I thought insanely expensive for what we got, considering the outstanding meals available in Paris for a fraction of the cost.  If you need a car-friendly hotel in Paris or a luxury business hotel a little out of the city’s hustle and bustle, I’d highly recommend the Sofitel La Defense – but skip dinner and hop on the Metro into central Paris to dine.

DISCLOSURE:  I stayed and dined one night as a guest of the hotel and stayed one night at a reduced media rate. I received no further remuneration in exchange for this post and all opinions are my own.