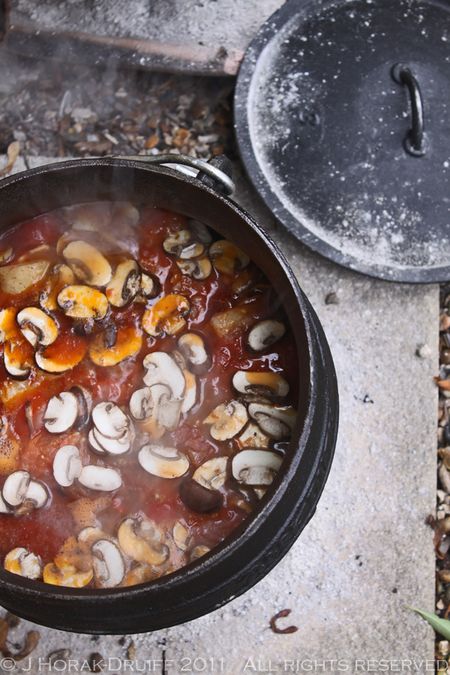 It’s a great word – like energy, only better (and despite the way it sounds, no hint of sin!).  It boils down to the notion that a cohesive group is more than the sum of its parts; that a group has the ability to outperform even its best individual member; and that teamwork will produce an overall better result than if each person within the group were working toward the same goal individually.

Synergy is the reason why trade unions are more successful at asserting the rights of workers than individuals could ever be; it’s what makes a sports car more desirable than a pile of its component parts; it’s what makes a symphony such a deep and visceral pleasure to hear; and it’s the reason why meringues provide such an astonishing contrast to their raw ingredients. Most of my dealings with synergy these days involve the preparation of food, but this past weekend I was reminded of the power of synergy in a human context when I was one of the presenters at the second Plate to Page workshop in Tuscany, Italy. On paper, it’s 4 instructors from four different European countries who only see each other a couple of times a year, together with 12 strangers who blog, who get together for 3 days to write and photograph, in a Tuscan villa where the thick stone walls can give the interior a fridge-like chill and the local insect population are keen to get to know you better! It seems tremendously unlikely that this intersection of people and place will yield positive energy, creativity, passion, laughter and friendship… and yet it does. After months of preparation and fretting and discussion; after deposits had been scraped together, schedules rearranged, and plane tickets booked, this disparate group of people descended on Il Salicone last weekend to spend three days indulging their passion for food, writing and photography.  Connections were made, friendships were forged and projects were tackled together.  Meals were prepared and eaten, assignments were handed out and shared between pairs, guidance and feedback were given.  And by the time Sunday night came round and I could gaze around the dinner table at 16 shining, happy, energised faces, I had no doubt that there had been synergy between the four instructors and between the 12 participants, and that Plate to Page Tuscany had become far, far more than the sum of its parts.

Synergy is also what turns an ordinary-sounding pile of not particularly expensive or fancy ingredients into something deeply satisfying and flavourful with the simple application of a lot of slow heat and a little patience.  I have written previously about the South African tradition of potjiekos (literally “little pot food”). A potjie is a cooking pot that can trace its origins way back to the early history of the Afrikaners in South Africa.  These round, 3-legged cast iron pots were suspended over an open hearth to cook in early Cape homes and taken on ox wagons with the Voortrekkers into the interior, to be unhooked and cooked in over an open fire at night.  They proved so popular with the indigenous tribes in the country’s interior that traditional clay pots were soon swapped for these more durable vessels.  These days, they are used as a kind of open-air crockpot in which food is stewed slowly in a closed pot over hot coals, to emerge tender and fragrant and delicious.

This recipe is one that a friend recently selected as the first dish to make in her newly-acquired potjie which she brought round to our house.  I chose to add South African Peppadews – you can use the mild piquanté peppers if the hot ones are too intense – but any fresh chillies will do as well.  This potjie‘s warm, smoky flavours and rich sauce make it perfect for an Autumn meal when the aternoons are getting chillier and guests feel the need for something nourishing and warming.  It’s really not rocket science to make, but the end result is one of the most deeply satisfying things I have ever eaten out of a potjie. Think of it as a big bowl of edible synergy. Once the coals are ready and the pot has been heated up a little, add a splash of oil to the bottom of the pot and fry the onions, garlic and chorizo in it until the chorizo releases some of its lovely red oil.   Add the chicken pieces, potato (if using), bell peppers, Peppadews, paprika, thyme, bay leaves and a good grind of black pepper.  Carefully stir to mix.  Then add the tinned chopped tomatoes together with all their juice – the stew should look a little soupy as the liquid is needed for the cooking process.  if it looks dry, add a little water or chicken stock.

Close the lid tightly and leave to cook for 90 minutes or so, replenishing the coals as necessary and WITHOUT lifting the lid to peek or stir! After 90 minutes, check the meat for doneness and add the mushrooms.  Cook for a further 15 minutes, then check for seasoning and season as necessary.  If the sauce is still too watery, mix a little cornstarch/cornflour with water to make a paste and stir this into the stew.  Serve immediately on fluffy mashed potatoes or rice.  The robust and vaguely Spanish flavours will pair well with a glass of Rioja (yet more synergy!).

To my amazement, given the recent conversations I have had with the organisers about the rules, my entry into the South African Blog Awards 2011 has been accepted.  The public voting phase (which will determine the finalists) is open until 9 November and  this year only ONE vote per person per category is allowed. If you have enjoyed the recipe, writing and photography on Cooksister over the past year, I would hugely appreciate your support in the form of a vote for Cooksister as Best SA Food & Wine Blog or Best SA Photography Blog – simply click on the badge below to cast your vote for me and follow the instructions given. You will have to enter your e-mail address and after you have voted you will receive an email with a confirmation link – you must click this link, otherwise your vote will not be counted, so please do click through.  Thank you for your support! 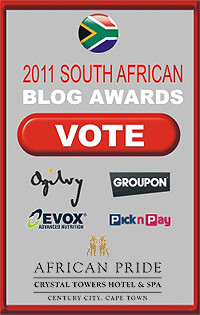