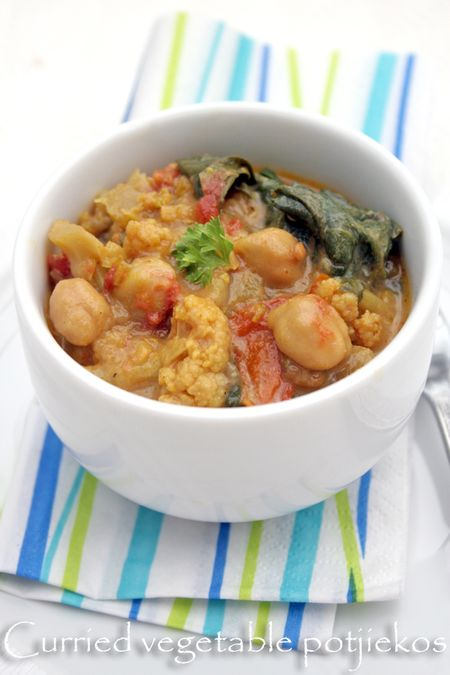 A colleague of mine recently returned from a week of watching FIFA 2010 World Cup football in South Africa.  He said the football was so-so, but he loved the country – and the food.  Because he stayed with friends rather than in a hotel, he really got to eat what the locals ate.  The first thing he said to me when he got back was:  “Oh my word, your countrymen like to braai (BBQ)!”.  And the second thing was:  “I have NEVER seen so much meat on a plate!”.

What can I say – it was all true.  South Africans LOVE to braai and we love our meat.

Everybody who has ever known South Africans will know all about their beloved braais:  the plumes of smoke emanating from the garden when the braai is lit; the mouth-watering smells wafting around the neighbourhood; the sizzle of meat on the grill and the hiss as Castle Lager is used to extinguish the flames.  But not many people outside South Africa are familiar with our other favourite method of outdoor cooking:  the potjiekos.

A potjie is a South African cooking pot that can trace its origins way back to the early history of the Afrikaners in South Africa.  These round, 3-legged cast iron pots were suspended over an open hearth to cook in early Cape homes and taken on ox wagons with the Voortrekkers into the interior, to be unhooked and cooked in over an open fire at night.  They proved so popular with the tribes in the country’s interior that traditional clay pots were soon swapped for these more durable vessels.  These days, they are used as a kind of open-air crockpot in which food is stewed slowly in a closed pot over hot coals, to emerge tender and fragrant and delicious (a literal translation is potjiekos is “little pot food”). The great thing about potjies as far as the cook is concerned is that after the initial effort of chopping and layering the ingredients, there is a prolonged period of relative inactivity.  For anything between one and four hours (depending on what you are cooking), there is little for the cook to do except replenish the coals under the pot… and drink beer.  Perfect! Potjies are sold in various sizes, from miniature ones in which to serve hot sauces, to giant 83 litre specimens that hold enough food to feed an army.  To feed 6 people though, a No. 3 size pot is what you need.  If you are thinking of buying one (and there are many places that will sell you one online!), try to get a really heavy one. Each pot varies considerably, so pick up each one on display in the size you want, and select the heaviest (the thicker sides will mean that it’s harder to burn your food).  The other two things to watch out for when selecting a potjie are whether it stands steadily on its 3 legs (you don’t want a wobbly potjie!); and whether the lid fits tightly.

Although pre-cured potjies are now apparently available, the puritan will always cure their potjie before its first use – remember, it is a piece of unmachined cast iron and might impart metallic flavours and flakes to your food.  Start by filling the pot 2/3 with water, adding 200ml of vinegar and boiling it for an hour.  Allow to cool, empty the pot, and scour the inside thoroughly using sandpaper.  Repeat the process, using leftover vegetables or peels instead of vinegar and allow to boil for at least an hour.  Empty the pot, scour again with sandpaper, rinse and dry.  Prepare your potjie for storage by coating the inside of the pot with a thin layer of cooking oil to prevent rusting.  If you don’t plan to use the potjie for a while, stuff crumpled newspaper into it too, which will absorb any moisture and prevent rust.  We had our pot in storage just like this for 7 years within sight of the ocean.  Everything else I owned rusted (including the casette mechanism of my rather good sound system, grrr) – but the potjie didn’t.  After every meal, rinse the pot with warm soapy water, dry, and then coat with oil.  And although potjies seem indestructible, the two things that can damage them is to place them over open flames (they should only ever be over ashy coals); or to add lots of cold liquid to a boiling hot pot.

Favourite potjiekos stews can feature lamb or mutton, seafood, chicken, oxtail or vegetables – in fact anything that you can stew – with ingredients, layered according to required cooking times (longest at the bottom, shortest on top).  Recently in London, we have been making vegetable potjies as a side dish which not only eliminates the need for complicated salads, but also means that any vegetarian guests feel like they are part of the action, rather than a fifth wheel – as they do at most braais 😉

This potjie recipe was adapted from two recipes for vegetable stews, neither of which required a 3-legged cast-iron pot, or an open fire – so don’t feel you have to miss out on the fun just because you do not have a potjie! A Dutch oven or slow cooker will do just fine.  This particular potjie turned out deliciously spicy (I knew I should not have turned my back on Nick when he was holding the cayenne pepper!), but the sweetness of the coconut milk made it a very balanced dish.  If you like a more mildly spiced dish, leave out the cayenne pepper, de-seed the fresh chilli, and use a mild curry powder like korma.  If serving this as a main dish, prepare some rice or couscous to serve it on.  Leftovers keep for 2 days in a sealed container in the fridge and also make a delicious soup if re-heated with a little extra water or stock and liquidised with a wand mixer. CURRIED VEGETABLE POTJIEKOS (serves 10 as a side dish) (For printable recipe, click here)

Melt the butter and oil together in a large, heavy-bottomed frying pan.  Add the onions, garlic, ginger and chilli and sautee gently for about 10 minutes.  Add the spices, curry powder and salt and continue to cook for a further 4 minutes or so before turning off the heat.

Layer your vegetables in the potjie pot as follows, with a ladleful of the onion & spice mix between each layer:  potatoes, broccoli, cauliflower, zucchini, pepper, chickpeas, aubergine, chopped tomatoes.  Carefully pour in the chicken stock and the coconut milk and close the lid tightly.

Allow to cook over hot coals (not flames) for about 2 hours, replenishing the coals as necessary – you can also place a few on the lid to ensure even cooking.  You should be able to hear the pot pubbling lightly through the closed lid.  DO NOT stir, and try not to lift the lid for a peep too often!

When the vegetables are cooked, add the spinach (you can stir at this point, although from the picture you will see that Nick chose not to and just put the spinach on top).  When the spinach has wilted, remove the pot from the coals and serve immediately.