You are here: Home / Travel / Sweden / A taste of Lund, Sweden 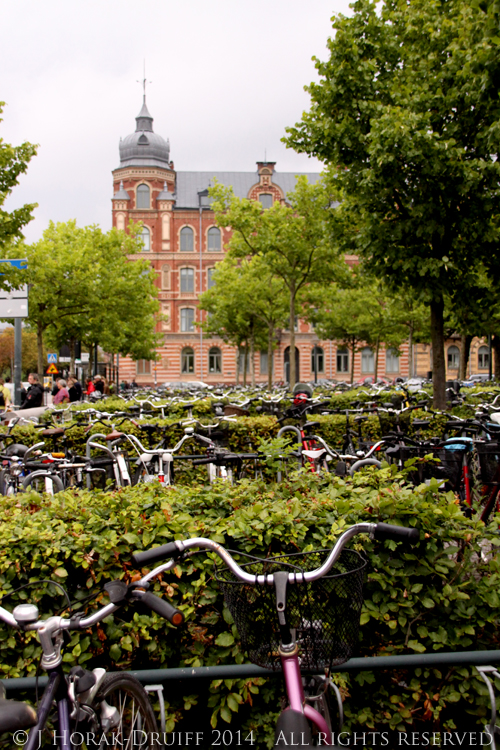 “Wow”, said Nick as we surveyed the scene outside the train station, “they sure like their bicycles!”.  And he was not exaggerating:  the kind of space you normally see devoted to cars is the amount of parking space dedicated to bicycles in Lund, a university town near Malmö in southern Sweden.  Like all the best university towns, it is compact – you can walk right across town in about fifteen minutes – and therefore ideal for cycling.  In fact, nearly half of Lund’s 83,000 residents use a bicycle for their daily commute.  But there is a lot more to see in Lund than bicycles and we were there to spend an afternoon exploring the town on foot, under the expert guidance of Sandra Andersson from the Lund Tourism office.

As we walked, Sandra told us a little about the history of the town.  It is thought that Lund, in the Swedish county of  Skåne (Scania), was founded by the Viking Sweyn Forkbeard in about 990 AD when Skåne still belonged to Denmark. In 1658, the  Scanian lands were ceded by Denmark to Sweden by the Treaty of Roskilde, but it is still easy to get to Denmark as Copenhagen is just a short ride across the impressive Öresund Bridge (well 8km of bridge and 4 km of undersea tunnel).  But we weren’t there to talk about history – we were there to sample some food!  Our first stop on this brief foodie tour was the Saluhallen, Lund’s market halls on Mårtenstorget opened in 1909 to replace the open-air meat and fish market on the main town square.  It was originally a structure made of slender iron pillars consisting of a main hall and 2 side halls for cheese and fish,  but was renovated in the 1950s, 1960s, 1970s and 1980s when space was added for dining venues in addition to the market stalls.  By far the most famous stall in the market is Holmgrens & Company, sole manufacturers of the famous lundaknake, a pungent type of pork and beef knackwurst unique to the town.  Sandra led us to the stall which was a carnivore’s dream – a display of every kind of smoked and cured meat you could wish for, from the more routine salamis, Prosciutto and coppa, to things like smoked reindeer – and of course a variety of sausages.  But we had eyes only for the lundknake, bought for about 11 SEK and served wrapped in a plain paper napkin to catch any juices.  Biting into the sausage reveals why it is called “knake” as it makes a distinct snapping sound when you bite through the skin.  Inside is a juicy, smoky, richly flavoured meat filling that reminded me of the so-called Russian sausages I used to eat in South Africa as a child.  It’s a sausage any city deserves t be proud of. 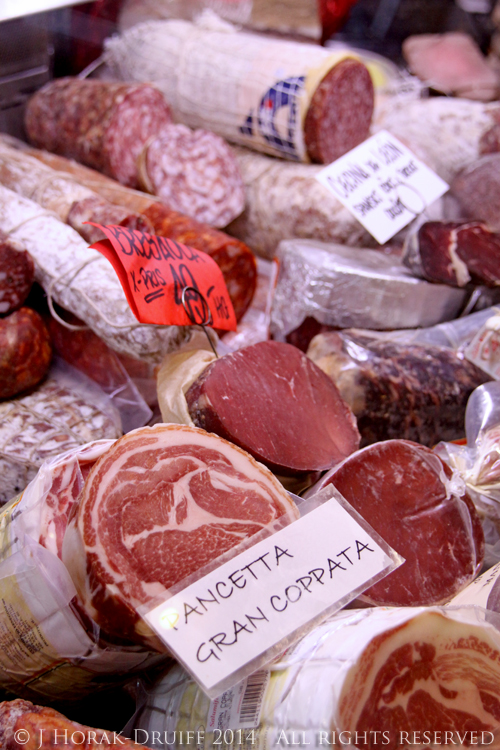 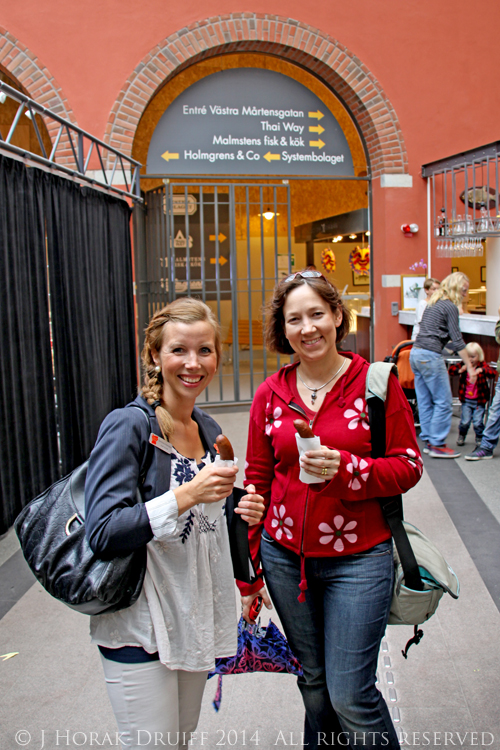 Having whet our appetite with a lundknake our next stop was the Grand Deli a smart new deli attached to the rather fab-looking Grand Hotel. We step through the door into a handsome high-ceilinged room lit by a chandelier where the walls were lined with shelves of beautifully back-lit bottles of oil and vinegar.  The centre island contained gorgeous fresh produce and carefully selected herbs and snacks (the berry fruit leather strips were a particular favourite of mine).  At the back of the room there is also an area lined with gleaming white beveled tiles like an old butcher shop where cold deli items such as antipasti and an excellent selection of cured meats is sold.  But as the charming owner explained to us as we sampled slices of excellent Italian salami, the focus of the deli is really their excellent daily selection prepared meals which have gone down a storm with locals.  Looking at the quality of the food on offer I could not think of anything much more appealing than warming up one of their preservative-free meals for a lazy night at home.  Before we left, the owner also introduced us to a particularly Scanian delicacy: spettekaka.  This towering conical cake is made from a mixture of eggs, potato starch flour and sugar which is rolled in strips s onto a skewer being slowly rotated over a fire or other heat source. The end result is a cream-coloured conical structure with a hollow core than looks a lot like the drip-castles I used to build from wet sand at the beach as a child, and has a very dry consistency rather like a more substantial meringue. These cakes can range in size from a few centimetres to several feet  – the ones we saw were probably about 25cm tall and sadly we did not get to try one. But whwat a good reason to go back to Scania! 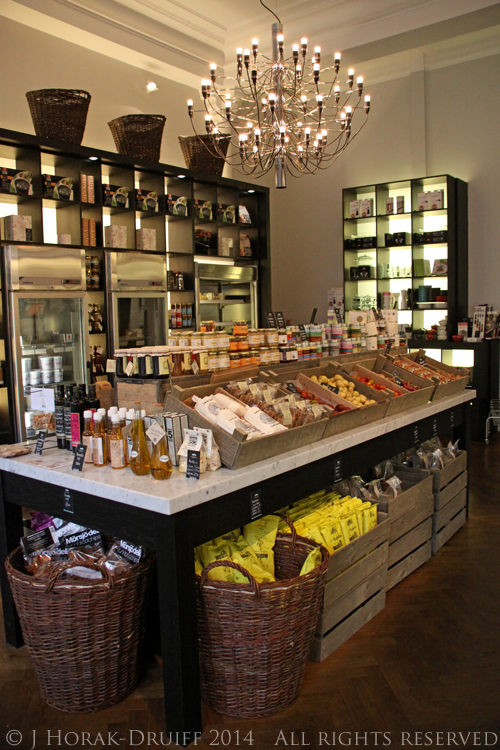 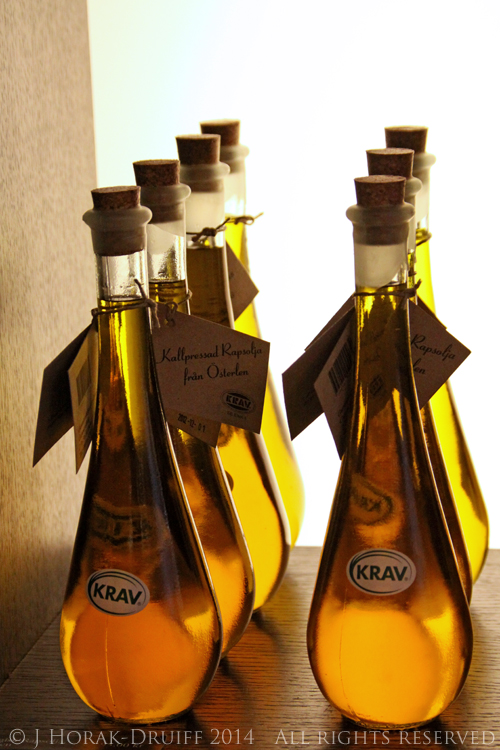 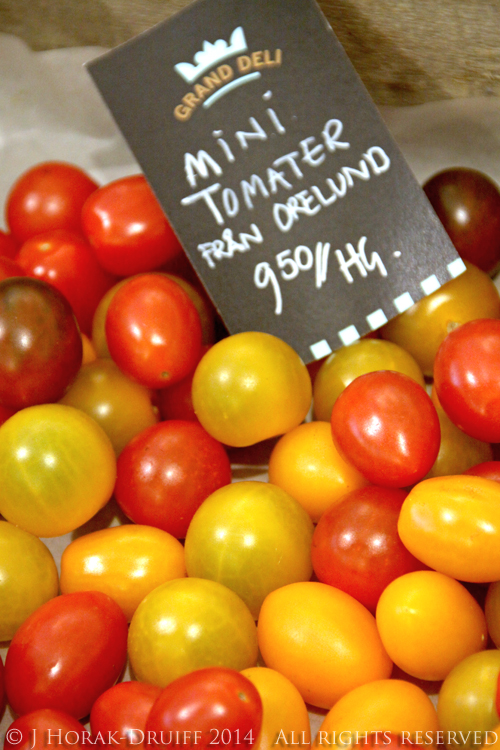 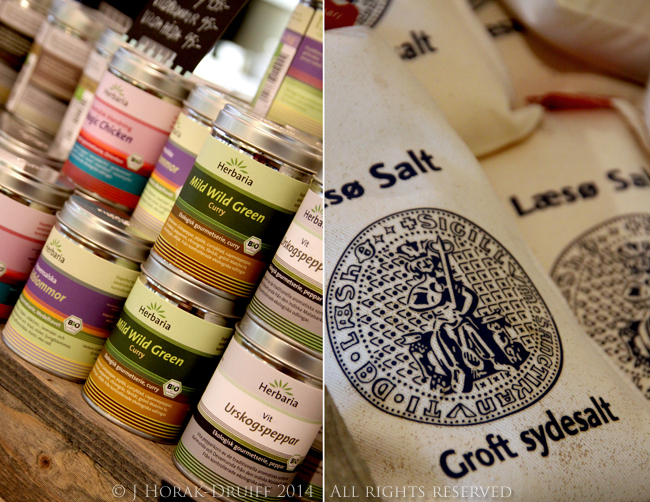 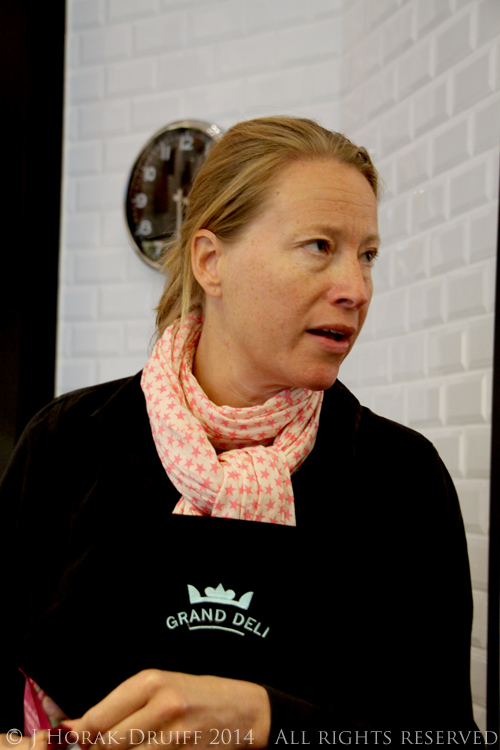 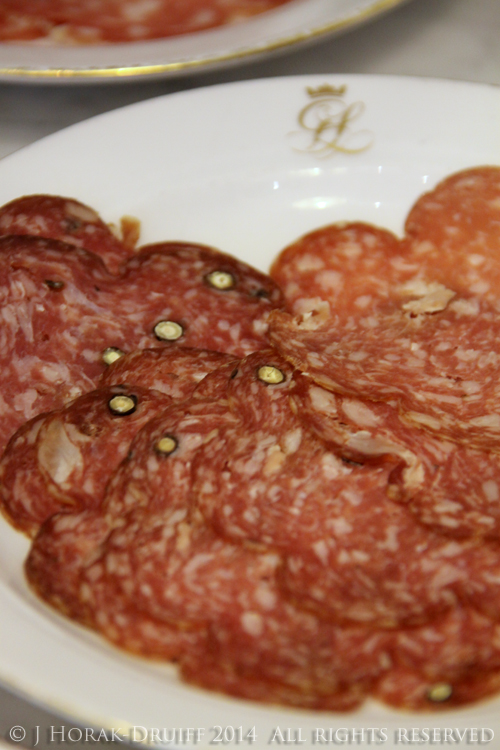 After all the savoury deliciousness it was time for something sweet and so we wandered over to Lilla Fiskaregatan to visit Ahlgrens Konfektyr, the sweet shop of my childhood dreams.  Every inch of the cosy store is packed with sweets and chocolates of every possible description – and there is even a friendly chocolate expert behind the counter in the form of  Patrik Langer.  Patrik told us that the store started its life as AJ Ahlgren Fruit and Confectionery sometime in the early 1900s.  Gradually the owners found that the business of chocolate and confectionery is more lucrative than fresh produce and they gave themselves over to confectionery entirely.  Patrik himself was a bartender who was looking for a change of scenery and bought the Ahlgrens business in 1994.  The learning curve was steep but rewarding and today, Patrik and business partner Stefan do a roaring trade in beautifully packed old fashioned candies, liquorice, marzipan and nougat – but the backbone of their business remains self-made pralines and truffles.  We spent a while in this treasure trove, sampling single plantation dark chocolates and all manner of decadent truffles, and enjoying Patrik’s enthusiastic company. 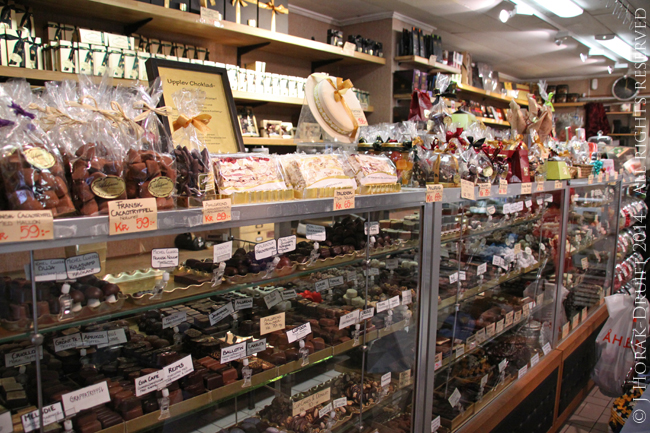 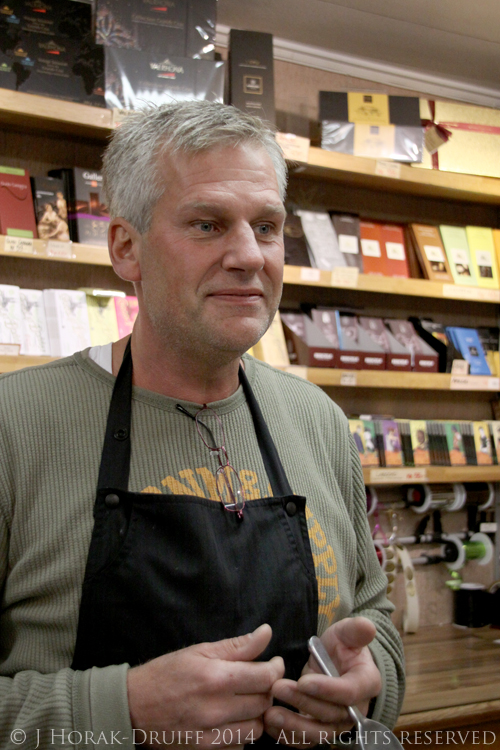 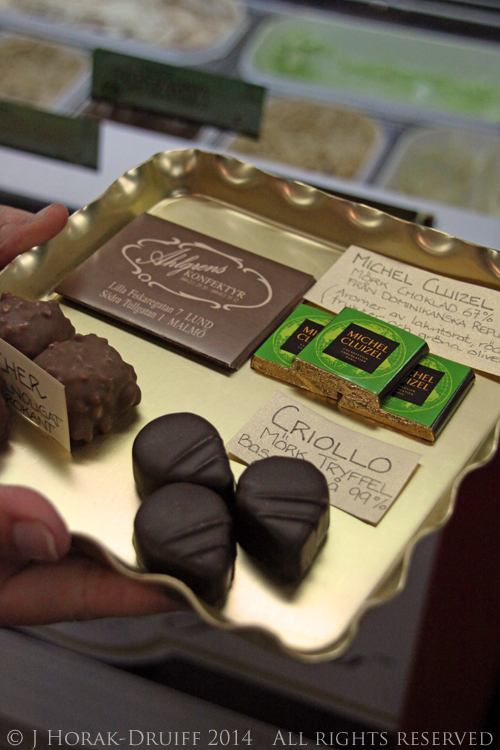 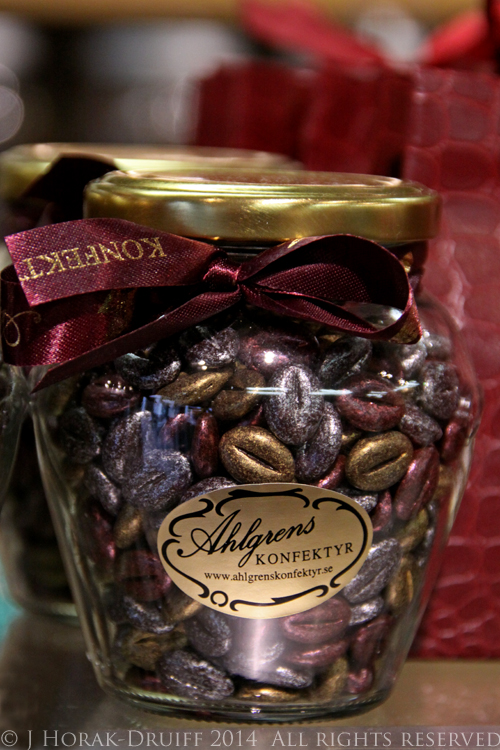 After all this nibbling, Nick and I both felt a little stroll would be in order and so Sandra took us on a quick tour of the town before we had to head back to Malmo.  First stop was Lund’s most prominent building, the 12th-century Lund Cathedral, or Domkyrkan.  Its two graceful 60m tall Romanesque towers are visible from most paces in town.  Extensively renovated in the 19th century, the cathedral’s simple brick interior is also home to an impressive  astronomical clock  over 6m tall which is decorated with carved religious characters and charts the position of the sun moon and other celestial bodies.  From there we left the fairly modern shopping areas where we had been grazing and walked towards the eastern end of town where the original cobbled streets and 18th century wood frame homes are still very much in evidence. 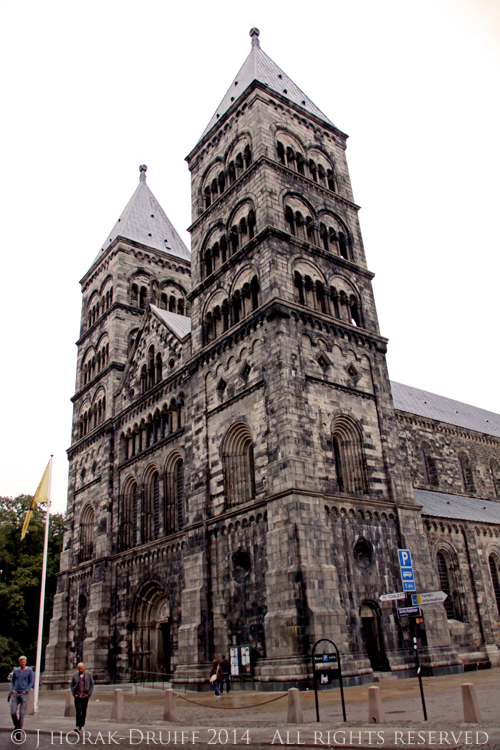 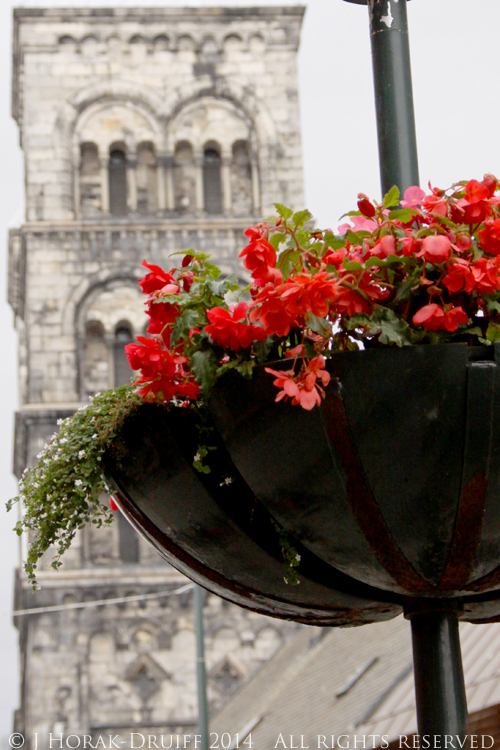 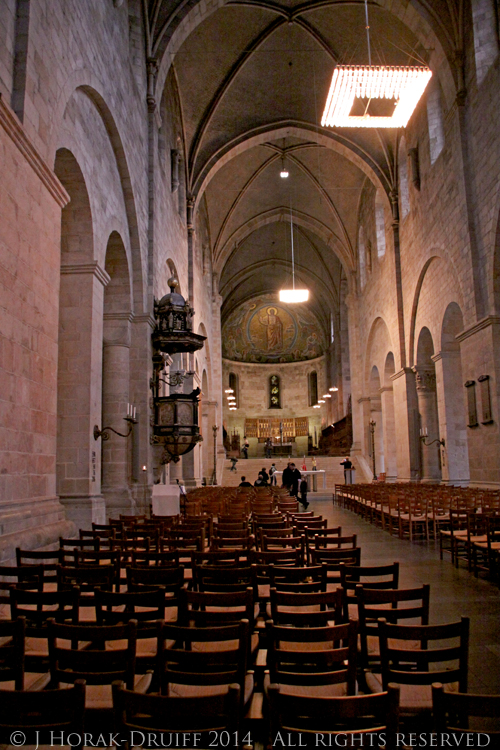 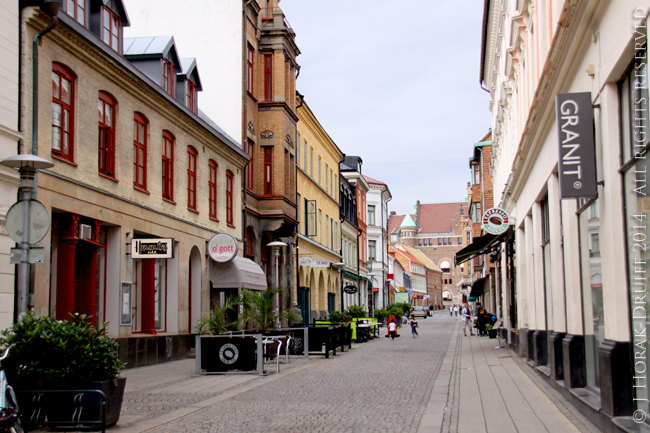 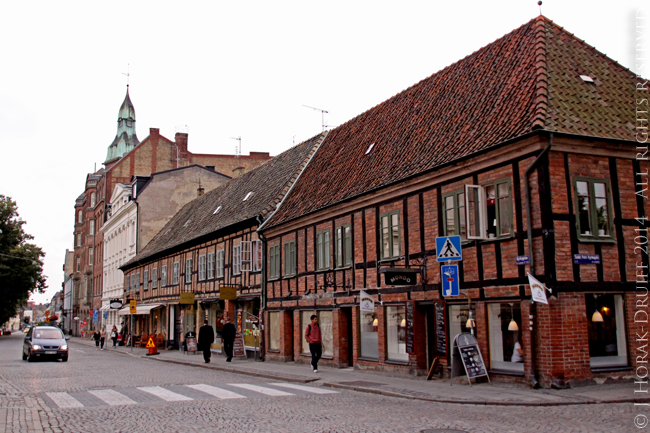 Our final stop for the day was Lund University, home to 30,000 students. Established in 1666, Lund is one of Europe’s oldest universities, Sweden’s largest university, and one of Scandinavia’s largest institutions for education and research. It is consistently ranked among the world’s top 100 universities, but even to non-students its sprawling and leafy campus is worth a visit.  Paths shaded by ancient chestnut trees lead between elegant university built of red brick and stone, like the Kungshuset – the oldest university building with its crenelated towers, completed in 1584 and currently home to the Department of Philosophy.  The campus also houses one of the most charming large fountains I have seen in a while, where four large bronze bullfrogs shoot streams of water out of their mouths into a pond.  I was very tempted to launch into a rousing chorus of Paul McCartney’s “We all stand together” 🙂 And with that our visit was over and we were back on the train for a short journey back to Malmö where dinner at Bastard restaurant awaited us. 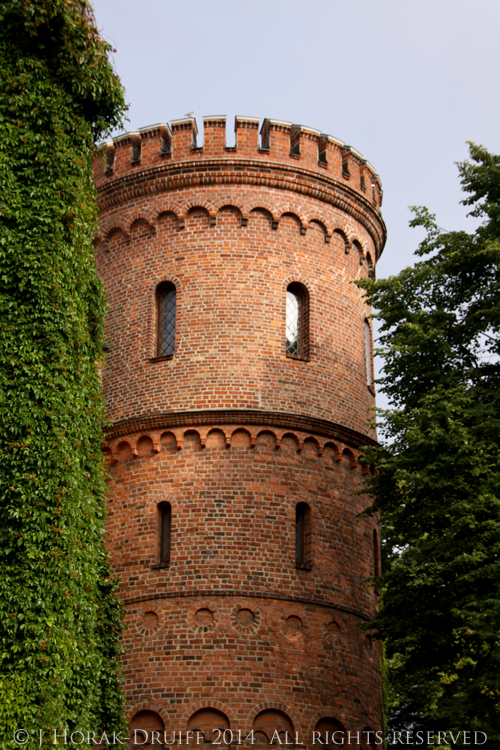 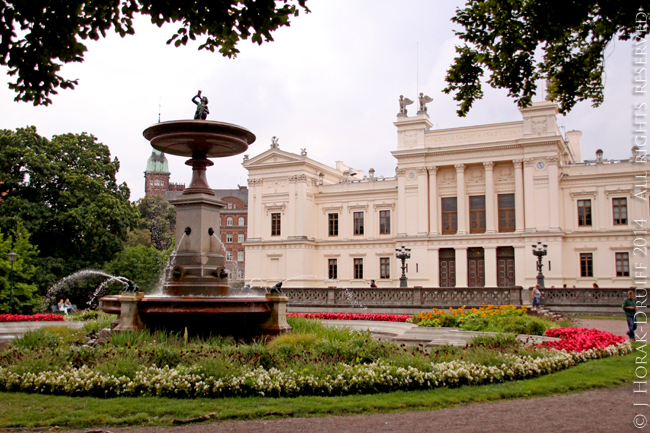 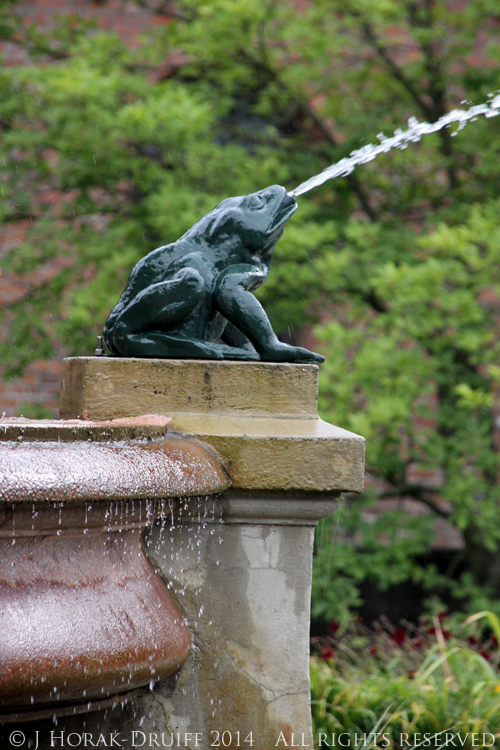 Lund is an easy daytrip from either Malmö or Copenhagen – trains run regularly from both cities to Lund. From Malmö central station, tickets can be purchased from the Skånetrafiken ticket machines.  If there are two or more people travelling together a Duo familj ticket offers the best value- it costs less than two adult fares and covers groups of up to five people travelling together, provided there are at least 2 adults in the group.

DISCLOSURE:  I travelled to Malmö and Lund  as a guest of Malmö Tourism and Visit Sweden, who paid for all transport, accommodation and meals except our dinner at Bullen which I paid for myself.  No further remuneration was received in exchange for this post and all opinions are my own.