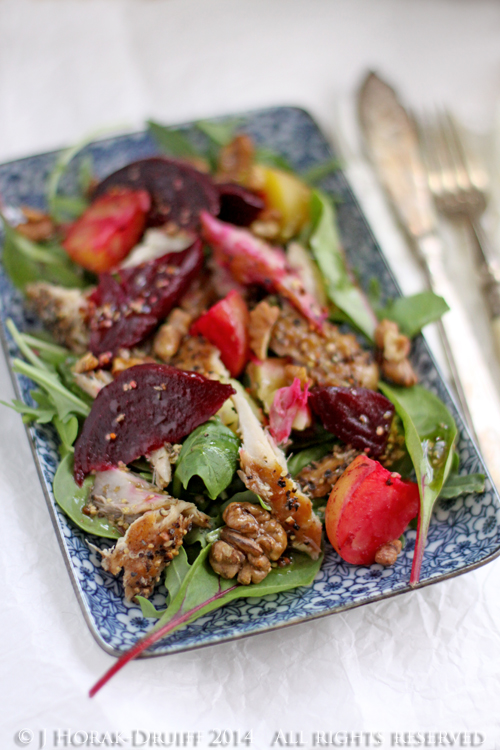 Like most weeks, last week saw many famous birthdays. Iggy Pop, the super-impressive and seemingly indestructible (despite his best efforts!) grandfather of punk turned 67.  Queen Elizabeth II of England turned 88  (although her birthday is only officially celebrated in June). Crispin Glover who played a fresh-faced George McFly  in Back to the Future turned 50 (and if that does not make you feel old, nothing will…). Jan Van Riebeeck who established the first permanent European colony in South Africa would have been 395 years old, were such a thing possible. Jack Nicholson is still incorrigible at 77 ; Shirley Maclaine is still fabulous at 80; and Bjorn Ulvaeus, founder member of ABBA, keeps going on and on and on (hah!) at 69. And if he were still with us, William Shakespeare would have turned 450 years old last week.

Of course, in many ways, Shakespeare is still with us – ask any child in high school in an English speaking country and they will probably roll their eyes at the prospect of having to study Macbeth, Romeo and Juliet, or another of the Shakespeare plays so popular in school curricula.  But Shakespeare left us far more than a collection of plays and poems.  He was an inveterate creator of new words and phrases – and where would the English language be without the words zany, remorseless, moonbeam, luggage, equivocal or bandit, all of which is credited with creating or at least using in a new sense (e.g. making a verb out of an existing noun).   But even more astonishing is the number of common English expressions and phrases that he invented – now so well-known that we scarcely give them a second thought as we use them. Think of:

He is also credited with inventing the phrase “salad days”, an expression that I first heard in the vintage Spandau Ballet song Gold back in the 1980s (which says a lot about my misspent youth!) but was apparently also famously used by Queen Elizabeth II in her coronation speech in 1953.  The expression always puzzled me. Were these hard times when you had no money for anything but plain salad? But apparently the salad is not a reference to enforced frugality but rather to youth and inexperience – hence the metaphor for greenness. More recently, salad days to me means the days of enforced confinement at home, during the warmest Spring we have had in a while, with time on my hands to make a proper salad for lunch every day.  As readers of this blog will know I have been eating very carefully since I broke my femur, trying to pack every meal with as many bone-friendly nutrients as possible and salads are perfect for that. This particularly delicious example is the perfect salad for people who don’t like rabbit food – there is nothing rabbitty about it and it makes for a colourful and substantial meat-free meal.  The recipe comes from the excellent BBC Good Food and I did very little to alter it, other omitting the horseradish as there was none in the fridge, but I am sure you could successfully experiment with additions and substitutions. It’s so tasty that it is guaranteed to vanish into thin air at any table 😉

Here are some more brilliant beetroot recipes from other bloggers: 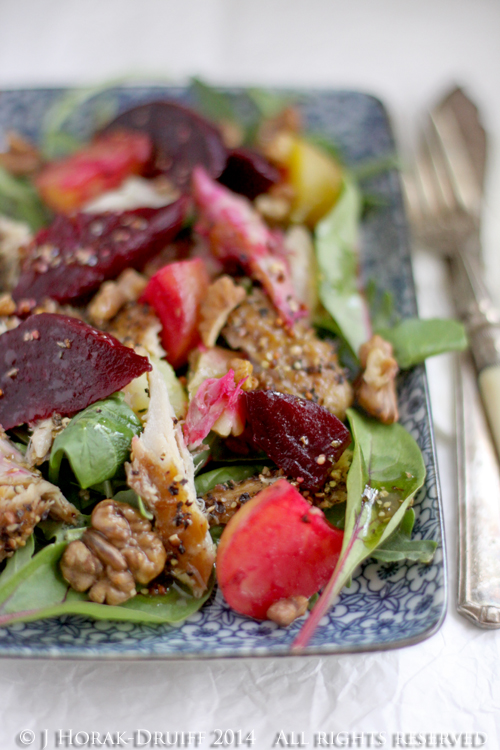 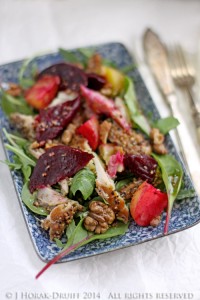