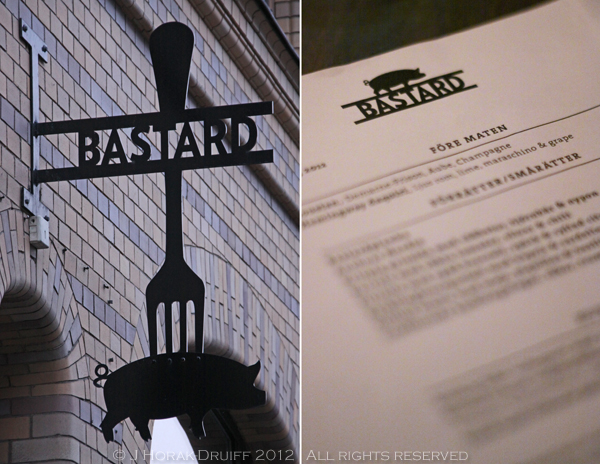 Much like first time parents, I imagine that would-be restaurant owners who are standing on the cusp of opening their first restaurant must spend inordinate amounts of time agonising about the name.  What are you trying to tell people about your offering?  Who are you trying to attract?  Are you trying to appear olde worlde and charming? Dependable? Witty? Young and funky? Zany and out there?  And yet, despite the amounts of time invested in this momentous decision, you still encounter restaurant names that make you think that the owners were on an obliviously drunk night out with their most immature friends when they came up with the names.  Think Crappito’s Italian restaurant; Phat Phuc Noodle Bar; Crabby Dick’s; Big Wong; and Hung Far Low: at worst, you are potentially going to offend customers and at best you might make them snigger and book for novelty value. I was not in the slightest bit offended when I discovered that we would be dining at Bastard in Malmö on our recent visit but it did cross my mind that no PR person had probably OK’d this peculiar choice of moniker.

“Bastard (n) – person born of unmarried parents; a thoroughly despicable person; (adj.) – ilegitimate, spurious, misbegotten”.  I was assuming that owner ??  was not casting aspersions on his own parentage (!) when he named the restaurant, so I am guessing that the name refers more to the “bastardised”, pan-European and non-traditional cuisine that they serve?  Neither the menu nor the website was at all enlightening as to where the name comes from, but looking at the food on offer (not a “traditional Swedish”  meatball or a lingonberry in sight) I am sticking with the second theory!  Bastard has been open for about two and a half years, and in that time it has acquired quite a reputation.  When I asked the people of Twitter to recommend a restaurant in Malmö, Bastard was the only name that came up repeatedly. Set in a quiet street off the bustling Lilla Torget square, Bastard announces itslef with a quirky sign featuring a pig impaled on a fork. Inside, the lighting is low, the opon kitchen is on show slap bang in the centre of the room; and the decor ranges from vintage New York industrial chic and white butcher shop tiles in the kitchen to rustic mismatched vintage chairs, flickering candles on the tables, and cosy red rugs underfoot in the dining area. Waitstaff all appear to be in a competition to out-funk each other in terms of asymmetrical haircuts and tattoos, but are all terribly friendly and happy to translate any part of the menu that you don’t understand.  It’s kind of like a Swedish take on London’s Spuntino. 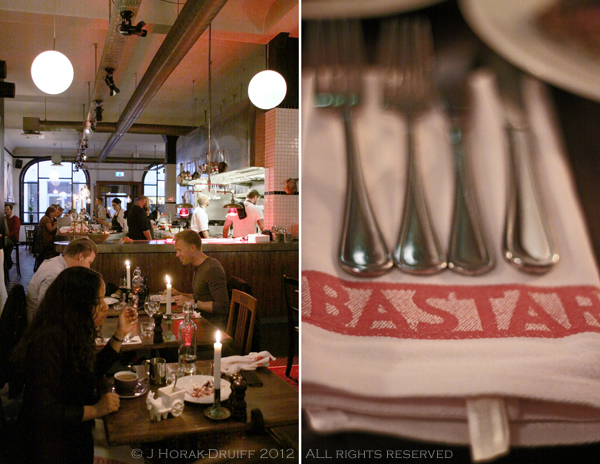 The menu, however, is less like Spuntino’s American-inspired louche comfort food but leans more towards St John’s philosophy of nose to tail eating.  That said, on the night that we visited there wasn’t that much on the menu that would scare timid eaters – no crazy organ meat dishes or deceptively cutely named chitlings.  While we looked over the concise menu, we were served some outstanding sourdough bread and butter – home baked, I would guess, and very moreish. For starters, Su-Lin and I could not resist the iconicBastarplanka – an item which is always available despite the regularly changing menu. Thischarcuterie board is literally served on a plank and consisted of chorizo, salami, pork headcheese, Prosciutto ham and duck rillettes, interspersed with crisp, tangy little corichons and pickled onions.  Everything on this platter was simply outstanding, but the chorizo and the sublime, melting duck rillettes deserve a special mention. Elsewhere, my dining companion Denise had the confit chicken wings with prawns and plack chanterelle mushrooms on potato puree (which she pronounced delicious). Anna had the most delicious chicken liver paté dish I have ever tried:  paté spread on slices of toasted sourdough, topped with a lattice of anchovies and sprinkled with capers: an umami bomb. And Nick had decadent burrata with olives, fresh basil and smoked cherry tomatoes (yes, very noticeably so!!) – the creamy, salty, smoky flavours of this dish were so simple yet so inspired. 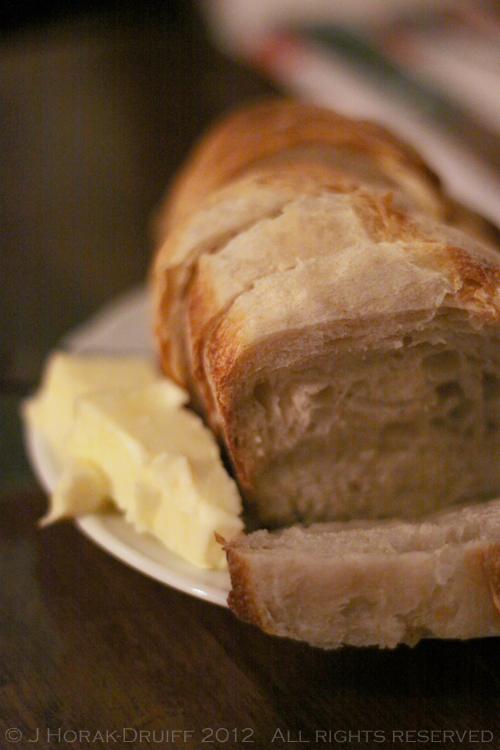 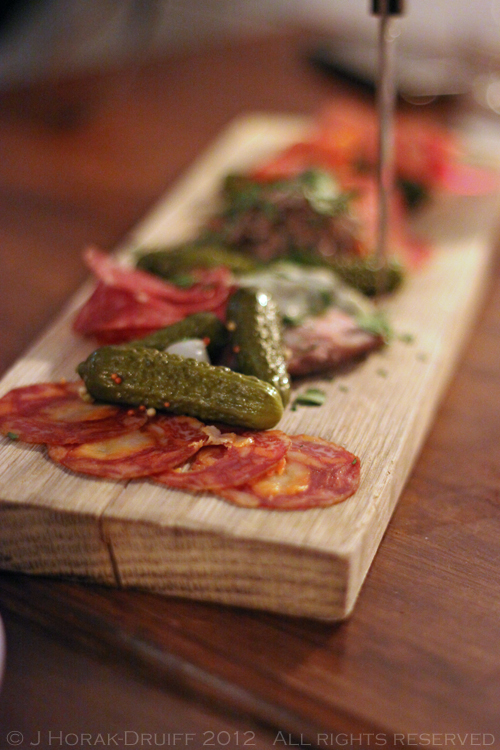 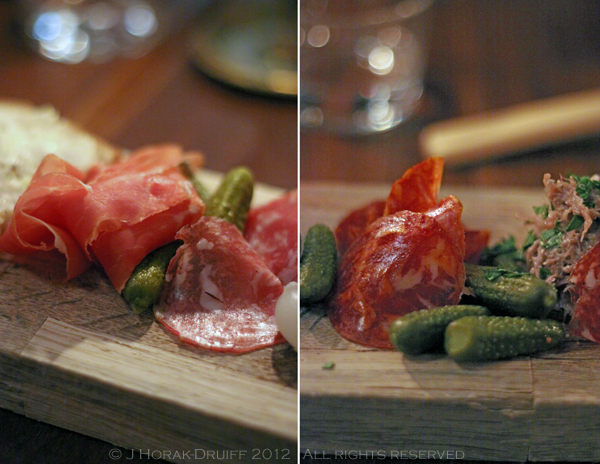 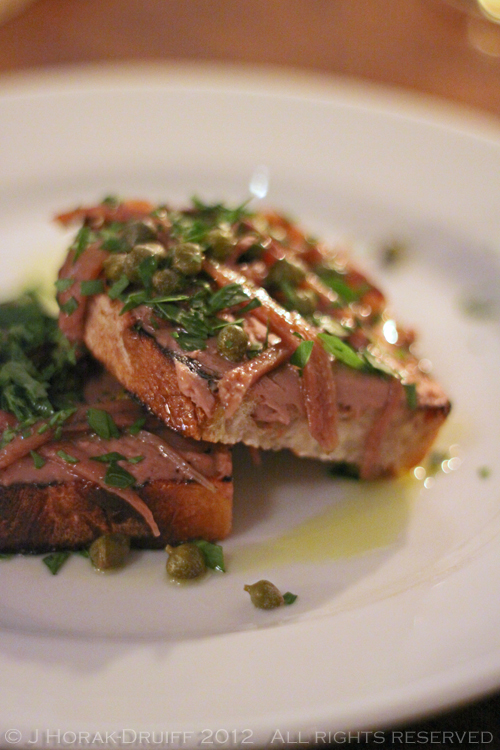 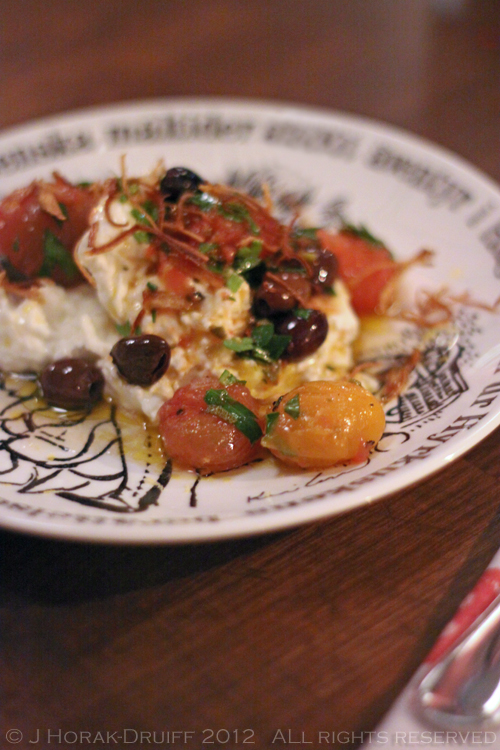 After those starters, the mains seemed nice but kind of… staid by comparison.  There were only three menu choices on the night we visited and nobody ordered the chicken, which left us with the other two:  pork or fish.  I opted for the fish: roast cod on a bed of potatoes, broad beans and chanterelles in a creamy sauce.  This was very good, with the fish cooked just to the point of moist flakiness and the flavour of the chanterelles coming through strongly.  Nick opted for the pork which was described as slow-braised pork shoulder, which had been shredded and served with an appley coleslaw, a potato bun and creamy wholegrain mustard mayo.  This was also good – like a gussied up pulled pork sandwich – but nothing earth-shattering. Just good, solid comfort food. 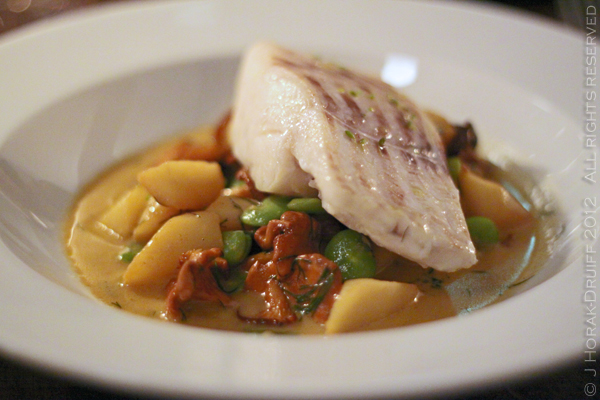 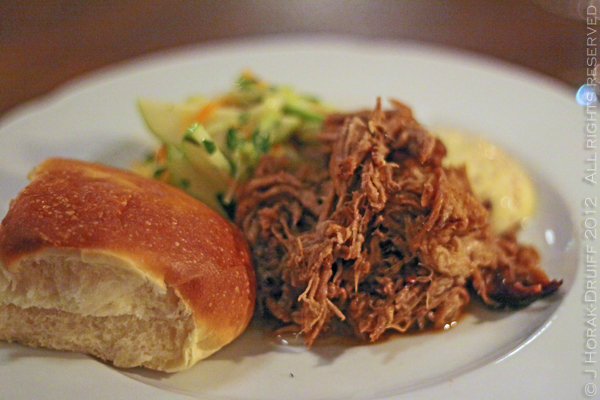 By the time we got to dessert, nobody was particularly hungry – a fact made obvious by our total inability to make a choice from the menu.  As a joke, I eventually said “we’ll have one of each!” and the waiter was quick to point out that trying each of the flavours of cie-creams was a great idea – decision made!  Denise had a pavlova of sorts – an obviously homemade meringue topped with cream, lemon curd and and a cascade of blueberries; while the rest of us tried the ice-creams:  lemon and elderflower sorbet(outstanding, fresh and light); dulce du leche stracciatella ice-cream (decadent and creamy); turron nougat ice-cream (lovely honey flavours)l and banana and burnt butter ice-cream (my least favourite, given my life-long dislike for bananas!).  There was not a duff note among them and they definitely were a different selection of flavours to what you’d find in your average English restaurant. 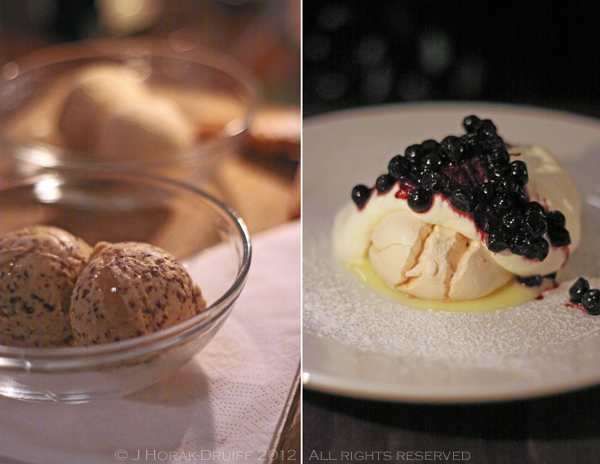 It was a lovely relaxed evening, helped by the cosy atmosphere of the room as well as the unfailingly friendly waitstaff – and of course the good food.  Unlike Spuntino, there is no designated time slot after which you are moved off your table, which also made a nice change from London.  Prices were on the steep side (90-120SEK for starters; 200-300SEK for mains) but not madly so.  To drink, we had a bottle of Vincent Dureuil-Janthal Bourgogne Passetoutgrain which Denise chose.  And when we finished off with (excellent) coffee, we were intrigued by the quirky, cat-chaped sugar bowl (in fact, you can see another quirky donkey cart sugar bowl in the second pic of this post). Bless the crazy Swedes!

You can find a couple of bonus pics in my Flickr set of the evening and another perspective on the evening in Su-Lin’s post on the same meal. Other posts about this trip to Sweden include A real Swedish crayfish party.  Other posts about my previous travels to Sweden for a seafood safari and te Gothenburg Christmas fair can be found here.

And while we’re chatting, don’t forget to submit your entry to my annual barbecue event, Braai, the Beloved Country, by 23 September! Participants also stand to win one of two copies of Braai Masters of the Cape Winelands (will ship worldwide) – so get the fire going right now!  Details of how to enter can be found here.