You are here: Home / Matching food & wine / The Chablis Challenge 2013 – Chablis and sushi 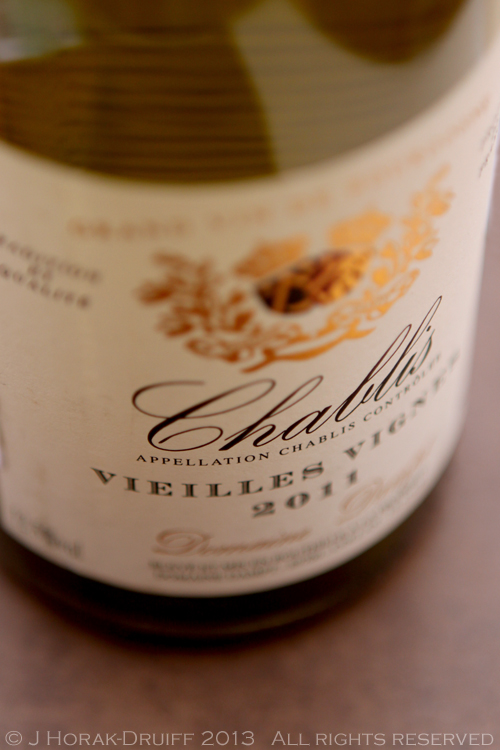 Have you ever noticed just how much of the relentless stream of annoying corporate-speak terms that we increasingly encounter is related to eating?  I suspect that the most often-borrowed business metaphors relate to sport (think game-changing, moving the goal posts, eye on the ball, level playing fields etc.) but I am almost certain that terms borrowed from the world of eating would come a close second. Just think of:

And of course we must not forget the takeaway.  I grew up and spend a large chunk of my adult life  labouring under the misapprehension that this meant Wimpy burgers and Kentucky Fried Chicken.  Au contraire. These days, evidently, the takeaway means the essential points from a presentation or meeting that the speaker hopes you will take away with you (because “remember” is so, like, 2005).  Annoying, much?  So how very Old Skool and refreshing it was to receive an e-mail from a PR firm recently using “takeaway” not in its annoying corporate-speak sense, but in the traditional sense of food taken away to enjoy at home. It was like a breath of linguistic fresh air.

You may recall that last year I participated in the 2012 Chablis Challenge in which bloggers were sent two bottles of Chablis wine and asked to create a dish to pair with them (mine was crab-stuffed portabello mushrooms).  This year, with the challenge sandwiched in between my ski trip and a trip home to South Africa, I was not sure that I would be able to take part as cooking is not too high on the to do list right now.  But there is a slightly different slant to the challenge this year: instead of creating a dish to match our Chablis wines, we were asked to pair the wine with a takeaway of our choice – from traditional jellied eels, to chicken tikka masala, to Nando’s. 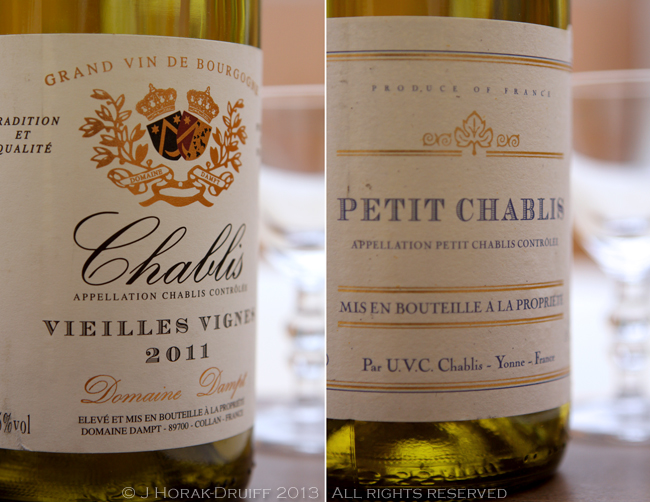 To make an attempt at food and wine pairing, you first have to know a little about the wine itself.  Chablis is a French wine-growing area situated roughly halfway between Paris and Dijon – officially the northernmost wine district of the Burgundy region.  The region is small, covering only 15 kilometres x 20 kilometres, and because it is too far inland to experience any marine influence, temperatures can be extreme.  Hot summers are followed by harsh winters where frost is possible into May – in fact, in 1957 vintage was so badly damaged by frost that the regional authorities reported that only 11 cases (132 bottles) of wine were produced. There are four different appellations or gradings of wine within the Chablis region, which reflect important differences in soil and slope, and hence differences in the quality of the wine.  At the top of the tree sit the seven officially designated Grand Cru areas, all lying on a single south-west facing hill above the town.  The orientation of the hill mean that they get a lot of sun, producing ripe grapes and wines with more alcohol and more intense flavours. Next come the 40 Premier Cru vineyards, whose wines in general contain at least half a degree less alcohol by volume and tend to have less intensity of flavour.  Below the Premier Crus comes the generic AOC Chablis designation into which most wines from the region fall, and which exhibits the most variability between producers and vintages. At the lowest end of the classification is Petit Chablis which includes wines from grapes grown on the outskirts of the region. 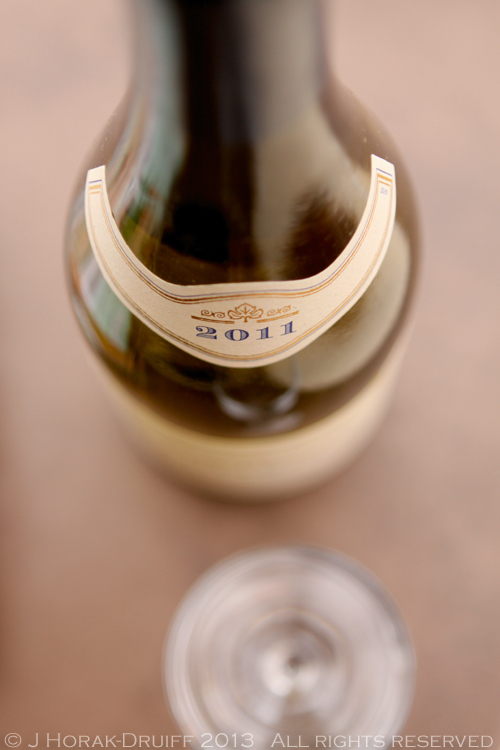 People are often surprised to hear that all Chablis is made of 100% Chardonnay grapes: “But this tastes nothing like an Aussie Chardonnay!” they exclaim when you reveal this fact.  The reason lies partly in the region’s soils which impart a unique minerally note to the wines; and partly in the neutral-flavoured wood that was traditionally used for the fermentation and maturation barrels.  Unlike American oak, this wood did not impart bold vanilla flavours to the wines, so traditionally the wines of Chablis have been far more restrained in their oakiness. Today, winemakers will either ferment or mature in oak barrels but not both – so if you like an unoaked or a lightly oaked Chardonnay, Chablis wine is for you. But what takeaway food to match it with? 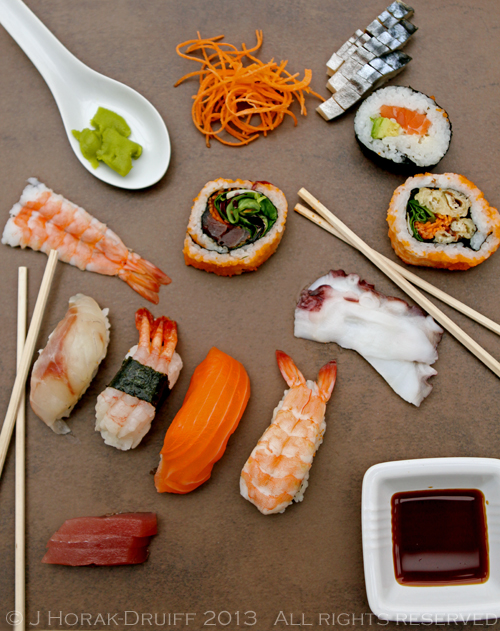 Matching food and wine is a lot less complicated than people make it out to be  (see my 60-second food & wine matching guide!). and a lot of it should be guided by your personal taste and a splash of common sense rather than a rigid set of rules.  I had previously attended a dinner where Japanese food was matched with French wine and I came away from that somewhat unconvinced of the wisdom of the pairing.  But I figured sushi might be worth a shot, seeing as you are not matching the food with all the complexities of rice wine vinegar dressings, matcha and ponzu: it’s basically just raw fish and rice, and I figured the Chablis would be man enough to stand up to the unctuous fattiness of salmon or tuna sashimi.  The excellent sushi in question came from Umai by the  The Japan Centre: a mixed tray of nigiri; a tray of mixed sashimi; and some spicy tuna Califormia rolls. But before we get to the food and wine matching, here are the wine tasting notes. 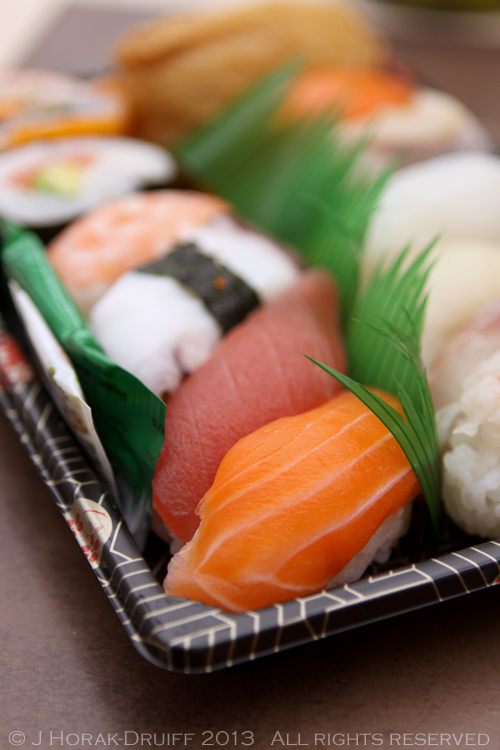 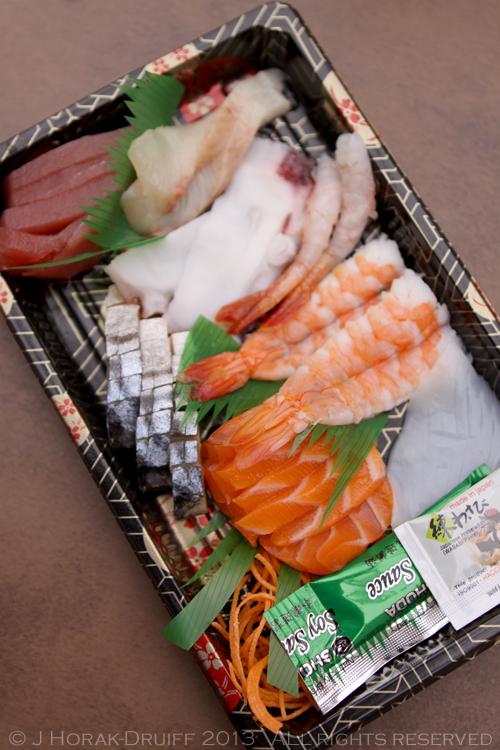 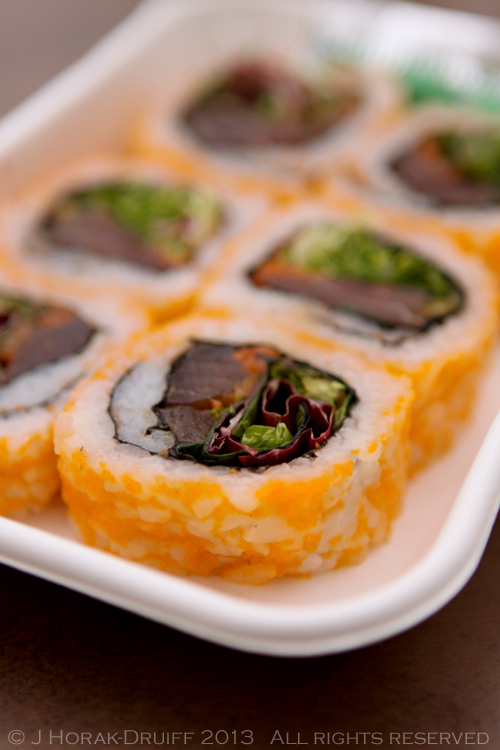 2011 Domaine Dampt Vielle Vignes Chablis (12.5% alc. £13.49 from Laithwates): A sparkling pale lemon colour with a nose of grapefruit and limes.  The palate packs an initial citrussy punch of lemons and grapefruit which then mellows into more minerally and slightly buttery notes.  Although the wine is dry, the mouthfeel is rounded but without ever being overwhelmingly heavy; and the finish is long with notes of passion fruit. It’s a delightfully balanced, complex wine and the antithesis of heavy, oaky New World Chardonnays.

2011 Union des Viticulteurs de Chablis Petit Chablis (12.5% alc. £7.50 from Majestic): A beautiful clear pale lemon colour in the glass but with a very shy nose – some faint citrus notes.  The palate is full of the bright flavours of lemons and limes – more acidic with fewer buttery notes than the first wine.  The finish is clean – sharper and also shorter, and overall the wine is less complex than the first, but still pleasantly refreshing. 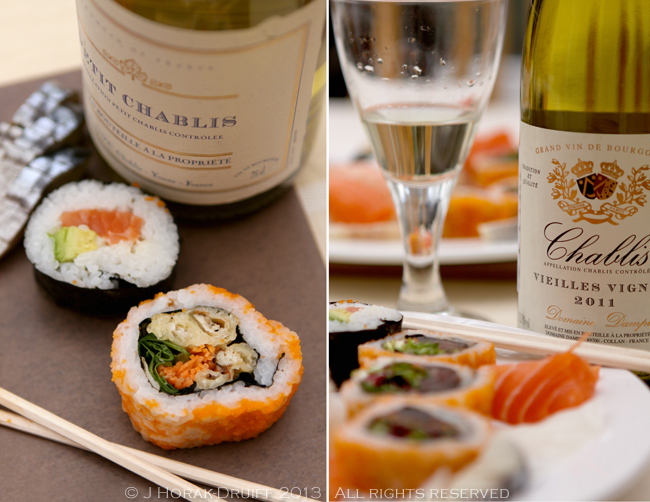 And did they work with the sushi?  Surprisingly… yes! The oiliness of the fish and the robust flavours of soy sauce and wasabi might be the death or lesser wines, but both of these were more than a match for the food, with the minerally notes in the wine echoing the iodine notes in the fresh fish. Interestingly, I thought the Petit Chablis (which was not my favourite in our pre-food sampling) was actually better matched to the food than the Chablis, with the food blunting the more acidic edges of the wine and making it seem a little rounder.  The Chablis, although also a very good match, seemed to lose the subtlety of its passion fruit flavours when paired with the food – but both worked surprisingly well and resoundingly contradicted the received wisdom that Japanese food and fine wine are not a good match. So your takeaway (hah!) from this story is to be fearless when experimenting with food and wine matches.  You never know when you’ll discover an unexpected treasure!

You may also be interested in reading about an intriguing dinner I attended last year where an alternative approach to the “red with meat, white with fish” rule was proposed – the gist of it was that if you add salt and/or acidity to your food, you can drink almost any wine with any food and the wine will taste good.

DISCLOSURE:  I was sent two free bottles of Chablis by the Bureau Interprofessionel de Vins de Bourgogne to enable me to take part in this challenge, but all opinions are my own. Thanks t0 Sopexa for inviting me to participate once again! Other food bloggers taking part this year include Lambshank Redemption, Cherrapeno, Ren Behan, Look Who’s Cooking Too and Lavender and Lovage. 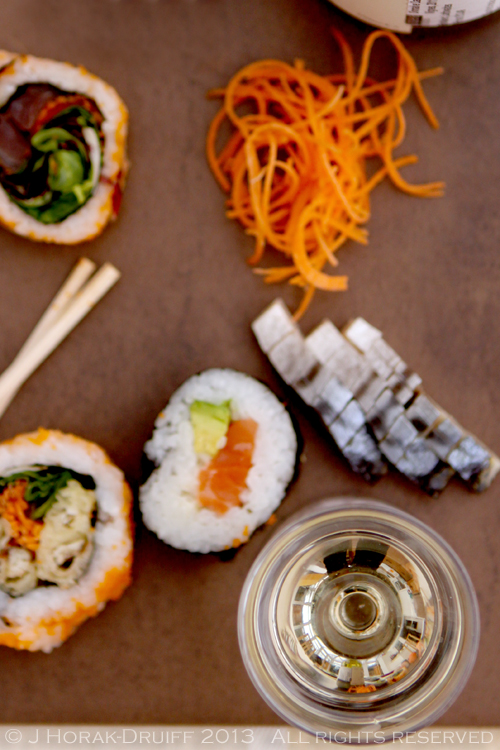