As some of you may know, I spent 8 very happy years of my life as a lecturer – one respect in which I did follow in my mother’s footsteps.  On my first day, I walked into a banked lecture hall of 110 students, having never lectured in my life.  Up to that point I had spent my entire working life (only 2 years, mind you!) in the South African Hight Court, defending criminals – but facing down a beady-eyed High Court judge pales in comparison to facing down a room full of 18-year olds, many of them not much younger than I was at that stage! I took the approach that if I didn’t tell them I was a newbie, they would never guess – so I just launched into the year as if I had been foing this my entire life.  I was serious, I wore heels and smart skirts, and I tried in all respects to behave like a responsible adult. By the time they realised that I was in my first year of lecturing, it was 6 months down the line and i had already established my authority.

I often think back to that first day and how stiff and formal I was in front of the class – and then I think back to how my classes were towards the end of my eight years.  We got through the syllabus allright, but in between we laughed and teased; we shared some personal stories; I wore sundresses and sandals in the summer; and when the class was unruly, I bribed them to settle down by promising a dirty joke when we got to the end of the chapter. A few years after I had stopped lecturing, I bumped into an ex student of mine.  We chatted for a while about what we were up to these days before he told me that I was one of the best lecturers he had ever had.  But as my chest swelled with pride, he instantly burst my bubble by saying that the one thing he will never forget about my classes was not understanding how human rights work; or how to form a contract – but “the joke about the pear”. A guy throws a fancy dress party and tells all of his friends that they must come dressed as a human emotion. On the night, his first guest shows up an dressed entirely in green.“What emotion are you?” the host asks“I’m green with envy,” replies the guest. The host smiles and ushers him in.The next guest is beautiful woman wearing only a feathery pink boa wrapped around all the luscious parts.

The host asks, “And which emotion are you?”

She replies, “I’m tickled pink!” The host nods and grins, and lets her in.

When the doorbell rings again, the host answers, only to find to find a naked Jamaican guy with his p3nis poked into a pear.

Flabbergasted, the host asks “And what the hell are you?”

So – 10 months of my careful explanations of complex legal concepts… and this is the sum total of what my students remember.  *Sigh* 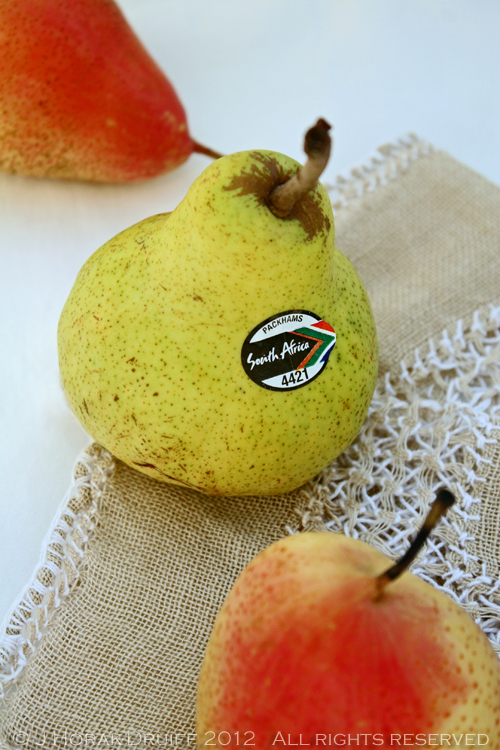 The topic of pears arose again recently when I received a beautiful basket of fruit delivered to my desk – all the way from sunny South Africa! How could I resist the taste of home, especially when it came in such an array of seductive shapes and colours…  South African pears are mainly grown in the Western Cape in area such as Elgin, Ceres and Wolseley.  South African pears are in season from February to August and are available across all major UK retailers during this time. Some of the fantastic varieties to look out for during the season are:

Pears are a great snack – high in fibre; low in fat and calories; high in potassium, Vitamin C and Vitamin E; and a good source of pectin which can help to lower cholesterol.  And of course, they are delicious! 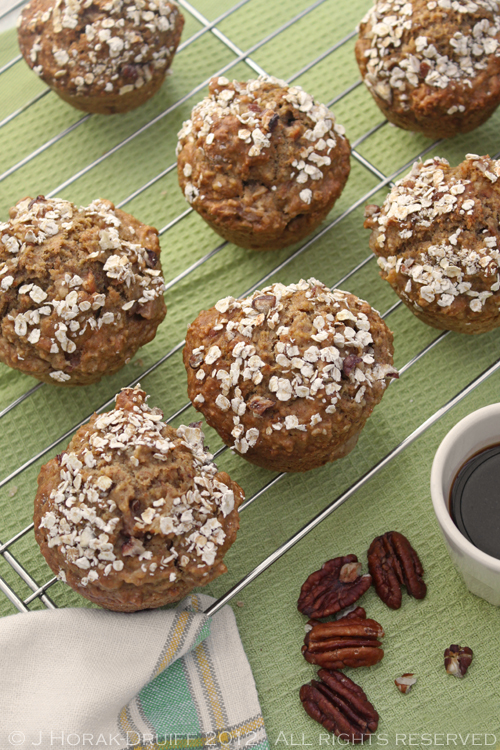 If you can resist the temptation to gobble them all up raw, pears are supremely versatile in both savoury and sweet recipes – for example have a look at my:
One of the few things I hadn’t made with pears, though, were muffins.  But I had a bag of excellent Flahavan’s porridge oats, and of course my bounty of pears, and discovered a little jar of maple syrup that a colleague had given me hidden in the back of a cupboard.  Voila!  The recipe I used was a slightly modified version of this one and the end result was fabulous:  moist, spicy muffins studded with chunks of sweet pear flesh.  Beautiful country, beautful fruit, beautiful muffins! DISCLOSURE:  I received the pears as a free sample from South African Fruit.
Spiced maple pear and oat muffins

And while we’re chatting, don’t forget to submit your entry to my annual barbecue event, Braai, the Beloved Country, by 23 September! Participants also stand to win one of two copies of Braai Masters of the Cape Winelands (will ship worldwide) – so get the fire going right now!  Details of how to enter can be found here.