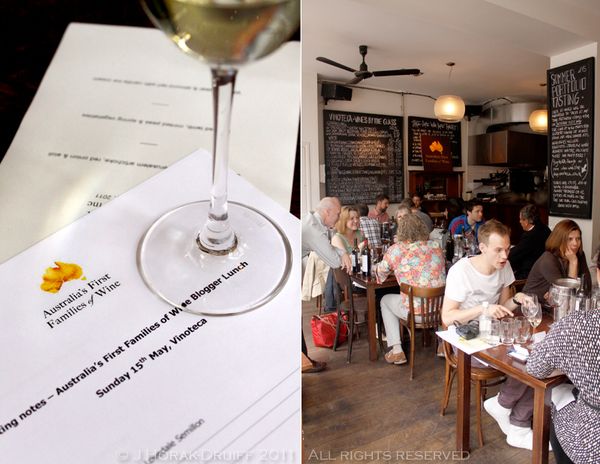 So… we’d been walked around Mayfair to a secret location – with a dress code, no less.  We’d missed trains and braved walks in dark woods up precipitous hills as well as hangovers to attend.  So when the invitation for the 4th in the series of ARSE (Andrew‘s Really Secret Event) gatherings arrived, I signed up without a moment’s hesitation.  I expected a list of instructions that included things like “bring an elephant gun and water purification tablets” or “make sure your compass works”.  Instead I got the far more prosaic “Meet outside Farringdon tube station at ten past noon on Sunday”.  Ah well. Guess the adrenalin was getting too much for our charming host ;o)

From Farringdon it was a mere hop, skip and jump on lovely flat, tarred roads (no dark hills!) to one of my favourite venues in London – Vinoteca where ARSE#4 was taking place.  Andrew explained that the event was to be some sort of speed dating.  Speed dating?  Surely he was kidding?  But no, we got to the venue to find long table lined with pairs of chairs facing each other in the classic speed dating style.  To our relief, though, we were not going to be speed-dating our fellow-bloggers, but the dozen or so Australian winemakers who were there representing Australia’s First Families of Wine, an initiative bringing together 12 of Australia’s oldest family-owned vineyards.  We would move from table to table, and at each table, 3 or 4 winemakers would get 4-5 minutes each to present a wine.  If only all speed dating were this much fun! At my first table, I met Bruce Tyrell of Tyrell’s Wines and Phil Ryan of McWilliam’s Wines, as well as Natalie Burch of Howard Park who has possibly the driest sense of humour I have ever come across – clearly I was an instant fan ;).  Here, we tasted the 2005 McWilliams Mount Pleasant Lovedale Semillon (quite tart with notes of Granny Smith apple and pineaple); the 2003 Tyrrell’s Winemaker Selection Vat 1 Hunter Semillon (an surprisingly French nose, and a wine that tasted astonishingly young, considering its age); and my runaway favourite, the 2009 Howard Park Riesling (a heady nose of apricots, but bone dry with a tremendously long finish). But sadly we couldn’t linger – we had more hot winemakers to date ;o) At the next table, we were greeted by Alister Purbrick of Tahbilk, Ross Brown of Brown Brothers, Leanne de Bortoli, and the irrepressible Chester Osborn (and his equally irrepressible shirt!) of d’Arenberg.  Each winemaker talked about their wine, but it was only Chester who also brought along props – a fake spider, a dead hand, a feral fox soft toy, sticks and stones…  Check out the names of their wines to see why! Anyhoo, back to business.  Here, we tasted the 2008 Brown Brothers Banksdale Chardonnay (a nose like a French Chablis and a lovely full, rounded palate – toasty but not overwhelming and balanced by lots of citrussy notes.  Totally unlike the standard expectations of an Aussie Chardonnay!); a 2008 De Bortoli Estate Chardonnay (a nose like a pot of melted butter and a palate full of grapefruit – classic and restrained); a 2009 Tahbilk Viognier (litchis and Apple Fizzer sweets on the nose followed by a big fruit salad palate full of apricots – a lovely big mouth-filling wine with well balanced mouth-watering acidity); and a 2009 d’Arenberg Money Spider Rousanne (fantastically intriguing nose with pears and honey; and a heady palate with spices, fruit and minerality all in one big bell curve of flavour and structure). My favourites here for me were definitely the Viognier and the Rousanne. Yet again, no time to linger as the buzzer sounded and we had to move to our final tables.  Here we met with Mitchell Taylor of Wakefield Wines, Johann Henschke of Henschke, and Chris Unger from Yalumba’s UK negociants.  At our final table we tasted reds, starting with the 2005 Henschke Mount Edelstone Shiraz (buckets of blackberries on the nose – like alcoholic Ribena – and an unexpectedly fascinating palate with smoky overtones and white pepper notes to balance out the berry hit).  Following that came a 2008 Yalumba The Scribbler Cabernet Sauvignon (an classic chocolate and mint nose; and a wonderful lush palate of ripe, upfront berry fruit and aforementioned mint preceding a long, bitter chocolae finish); a 2006 Campbells Bobbie Burns Durif – not a grape I get to see often (ruby port-like on the nose as well as the palate – quite tannic and might need some more time in the bottle); and my favourite of the bunch: a 2008 Wakefield Estate Cabernet Sauvignon (an almost savoury, raw meat nose and a complex, structured palate with dark berry fruit and vanilla and a hint of spice – absolutely wonderful and very well-priced too). That concluded the formal tasting part of the afternoon – all that remained was to sit back, relax, have lunch and socialise.  The starter looked almost too pretty to eat:  thinly sliced salt-baked celeriac, crispy Jerusalem artichoke chips, red onion and aioli. This was an inspired combination of colours, flavours and textures:  earthy, tangy, crispy, creamy.  Swoon.  It was also a great match for the Henschke Riesling, which was green-appley and had enough acid to stand up the earthy flavours in the food. The main course was a classic dish of rolled braised lamb, crushed minted peas and Spring vegetables (pattypan squashes, spinach and carrots).  The lamb was meltingly tender (and properly seasoned – a rarity!); but it was the crushed peas that had me swooning.  We found not one but two spectacular wine matches for the food.  First up was the 2005 Wakefield St Andrews Cabernet Sauvignon (prunes on the nose; and Christmas pudding full of dried fruit on the palate with a long vanilla-ish finish); and then there was the 2006 Jim Barry The Armagh Shiraz (an inky colour, a nose full of vanilla and white pepper; and a phenomenal mouth-filling palate of dark fruit and butterscotch). And last but by no means least came dessert:  Williams pear and almond tart with vanilla ice-cream and caramel sauce.  This was lovely – not too sweet or too rich (although I have to note that mine was a teensy bit overdone on the bottom).  Again we tried two wines with this:  the Yalumba Viognier (an almost gingery nose with apricots, like a dessert wine; and a huge butterscotchy, caramlised pineapple palate and a long finish); and the Campbells Rutherglen Topaque – a Tokay-style wine made from 100% Muscadelle grapes, rebranded in terms of a 2007 agreement whereby Australia agreed to stop using the term Tokay.  The colour alone sent me into raptures (a fabulous deep amber) but the nose (sultanas) and the palate (honey, dried peaches and a long, clean finish) were the real stars.

This was without a doubt one of the most succesful and enjoyable winetasting events that I have been to.  Not only were the AFFW winemakers an engaging, passionate and sociable lot – the speed dating format was also just inspired. It is so easy at wine tasting events to get stuck on one or two producers or to miss speaking to producers you had hoped to meet.  This format prevented both these situations and also meant that everybody mingled with everybody.  Serving a meal rather than a collection of dry crackers with the wine was also a great idea and provided us with much entertainment as we back-tasted and tried to identify the best match for each course.  Vinoteca, as ever, outdid themselves with the food, all of which was heavenly.  Thank you so much to Andrew for organising another fantastic event, and thank you to all the AFFW winemakers who took time out of their busy LIWF week activities to spend an afternoon with us.