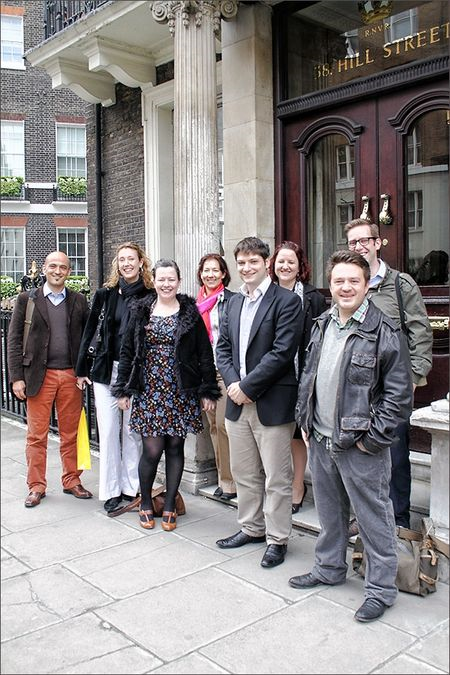 Photo courtesy of Andrew from Spittoon

Andrew of Spittoon and I have been friends for a long time.  What can I say – we have alot in common.  He blogs, I blog.  He likes wine, I like wine.  He loves his Canon DSLR, I love my Canon DLSR. At the LIWF, he stays over at mine; at the Henley Regatta, I stay over at his.  But mostly, I think we share a juvenile sense of  humour – so when he invited me to attend something called #ARSE, how could I refuse?

On the appointed day at the appointed hour, after many mysterious tweets and e-mails, all the #ARSE attendees (Andrew, Douglas, Niamh, Rupert, Sarah, Louis, Tara and I)  gathered at a bar near Kings Cross, where we sipped on wine, nibbled on tapas and tried to guess where our mystery wine tasting destination was. All we had been told was the dress code (no jeans, no trainers) so we were intrigued.  Guessing reached a peak when we arrived by Tube at Green park and started walking away from the park and eventually Louis guessed correctly that we were headed for the Royal Navy Club, a gorgeous private members’ club and HQ of the Circle of Wine Writers.  Soon we were happily settled into plush armchairs with bubbly wine sparkling gently in our flutes by the light of the crystal chandeliers.  Bliss! The bubbly wine in question was prosecco from Riccardo Prosecco, and there to talk us through it was their spokesperson, the very charming Riccardo Tomadin. He explained to us that all Roccardo prosecco is organic and the provenance of each bottle is fully traceable via the Web using identifying numers on their neck labels.  I was impressed and I had not yet tasted a drop!  Up first was the NV Riccardo Prosecco Brut from grapes grown on the hills around Valdobbiadene.  This was lovely – light and full of apply fruit with a lovely mousse.  Next came the NV Riccardo Prosecco Extra Dry from grapes selected from the hills around Valdobbiadene and Vidor, which was my runaway favourite of the proseccos.  It was showing a hint of bottle-age with accompanying yeasty biscuit flavours, a gloriously rich mouthfeel and a positively exuberant fine mousse.  The last of the proseccos was the NV Roccardo Prosecco Cartizze made only from grapes sourced in the Cartizze area – the Prosecco equivalent of a Grand Cru.  This particular bottle was made in 2008 as no Cartizze was made in 2009 – it had far more fruit than the previous two wines and was full of luscious fresh apricots.

Once we had had our fill of prosecco, we turned our attention to the really secret bottles of wine that each of us had been asked to bring along.  Louis brought along a real wildcard – a 1993 Lucien Aviet (Caveau de Bacchus) Vin Jaune.  Vin Jaune (literally yellow wine) is a speciality of the Jura region of France, similar in taste to dry Fino sherry.  It is made from late-arvested Savagnin grapes (a relative of Gewurztraminer) and barrel-matured in small oak casks to achieve its characteristics, but unlike sherry it is not fortified.  It is also not to everyone’s taste, as we discovered from the comments around the room!  Its nose reminded me of a sharp Fino, and on the palate it was dry ad sherry-like, with some grapefruit notes.  I can’t say I was a huge fan, but then I am not a huge fan of Fino either!  I do think that a bowl of olives and salted almonds would have helped the wine to come into its own.  Rupert, on the other hand, had brought along some NVMiguel Sanches Ayala la Bota 8 Manzanilla.  This limited release dry sherry, with only 2,500 bottles released.  The grapes are sourced from a single vineyard and the bodega where the wine is aged using the traditional solera method is close to the sea, both of which factors contribute to the unique flavours.  On the palate it first seems bone dry, but then develops intriguing almost savoury (briny??) flavours and ends in a long hazelnutty finish.  Delicious. Next up were the whites.  We started with a 2008 Krauthaker Chardonnay Rosenberg from Croatia (yes, you read that correctly!) that Tara had provided.  I had very low expectations – I mean come on, Eastern European wines have in the past been a byword for rot-gut reds and massive hangovers! But this was a total surprise.  Krauthaker vineyards lie in the northeastern corner of Croatia and mostly white grapes (predominantly Grasevina) are grown, although there are plans to increase the 7% of red grapes to around 30%.  Our tasting wine was the 2008 Chardonnay and it had a promising woody nose, having spent time in both French and Croatian oak.  The palate was surprisingly delicious with apply fruit and a smoky depth of flavour, combined with a creamy mouthfeel.  Who knew!  The other white was one which I provided and it will come as no surprise that it was South African.  Springfield Estate in the Robertson wine region has rocky soil with a high lime content and winemaker Abrie Bruwer prides himself on wines that reflect this unforgiving terroir.  The 2008 Special Cuvee Springfield Sauvignon Blanc is made from 24-year old vines and has a characteristic green pepper, minerally nose.  On the palate though, it was far more voluptuous than the nose suggests, with hints of gooseberries and even passion fruit.  It confirmed once again why Springfield is among my favourite South African estates – try to get your hands on their Whole Berry Cabernet Sauvignon (made with whole berry maceration and wild yeast fermentation) for a transcendental experience!

For the reds, we started with a 2006 Les Hauts de L’Algy Cotes de Rousillon Villages by winemaker Jean Marc Lafage, generously provided by Bibendum.  This blend of Grenache, Syrah and Carignan had a surprisingly sweet, ripe red fruit nose but the palate was slightly green and stemmy with a spicy finish.  I might lay it down for another couple of years before trying it again.  Up next was another wine provided by Bibendum and another complete surprise to me – the 2007 Estapor Venir Mexcla from Casa Piedra in… Mexico.  Yes, really!  This label is a joint venture between Bibendum and respected Mexican winemaker Hugo D’Acosta with the aim of creating sustainable viticulture in the Guadalupe Valley in Baja California.  This blend of Petit Syrah, Cabernet Sauvignon, Barbera and Zinfandel makes for a big wine with an almost meaty nose laced with rich prunes.  The palate does not show much ripe fruit but rather Christmassy notes of brandied raisins.  It has a lovely round, creamy mouthfeel and a very long finish – definitely a wine worth suspending your disbelief for!  Last up among the reds was a wine provided by Sarah – the 2004 Legaris Reserva from Ribera del Duero.  This 100% Tempranillo wine is a blend of three previous blends and spent on average 14 months in oak barrels of various cooperages, grains and degrees of toasting.  The nose is almost overpowering – an intoxicating fruit bowl of dark, ripe blackberries and vanilla.  Although the wine was far more tannic on the palate than the other two reds, it was also more complex with the deep berry fruit flavours coming through and ending in an extremely long vanilla finish. Our final wine for the day was something rather special – a 2007 Passito 1555 red dessert wine from Italian estate Casa Ronsil in the Chiomonte region.  The wine is a blend of Italian varieties Avanà , Becouet and Dolcetto and has a spectacularly beautifulo colour – rather like clear strawberry juice! The nose also reflects sweet strawberries, but the palate is more restrained than the nose suggests.  Among the strawberries there are hints of caramel, and the long finish leaves the palate clean and ready for more.  Delicious.

Thanks once again to Andrew for organising and to both Riccardo and Bibendum for providing us with some samples to taste.  And to all the attendees – lovely to meet you and see you at #ARSE2 soon!

Don’t forget to get your photo entries in for Does My Blog Look Good in This – I am hosting the August edition and need to receive your entries by 25 August!

And in other news, nominations are now open for the 2010 South African Blog Awards.  I would REALLY appreciate it if you would take a few moments to click on the link below and nominate me in the categories Best Food & Wine blog and Best Overseas Blog.  Only the blogs with the most nominations go through to be finalists, so every nomination counts!! Pretty please with chocolate sprinkles? When you click the link below, CookSister has already been selected as nominee in the abovementioned categories, so all you have to do is enter the security code displayed and a VALID e-mail address, then click on the link in the confirmation e-mail they send you. NB – you have to click the link in the e-mail that you will be sent, otherwise your nomination will not count!  Thanks ever so much 🙂