You are here: Home / Product reviews / Heston’s £300 Christmas pudding and Bluebasil brownies – all I want for Christmas! 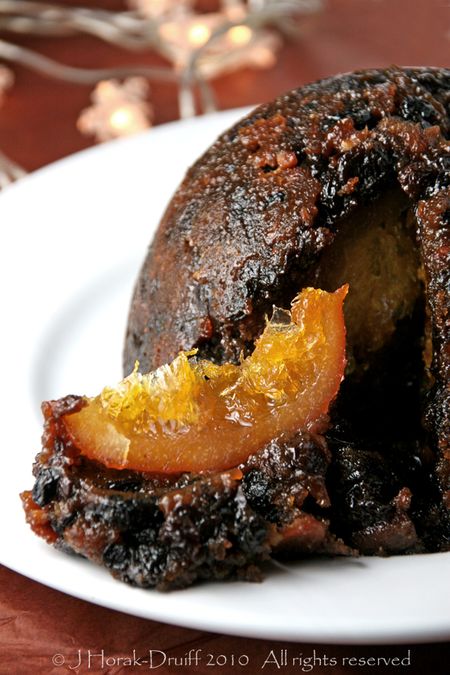 After my shocking confession in last week’s post that chocolates do not really do it for me (send me cheese or charcuterie if you want to get into my good books!), I am about to say something else equally controversial.  And I don’t just mean “Santa clause does not exist, boys and girls!”; or “Mmm, this reindeer stew is really tasty!  Who knew Rudolph was so flavourful!”.

The truth is… I am not much of a fan of Christmas pudding.  In fact, when people ask me what I serve for dessert at Christmas, more often than not the answer is Cape brandy pudding! But when the good folk at Waitrose got in touch last month asking if I wanted to try a new limited edition Christmas pudding created for them by Heston Blumenthal, I was tempted.  The unique selling point was that it contains a whole candied orange in its centre, to infuse the pudding with flavour and keep it moist.  Having eaten at the Fat Duck, I have tremendous faith in Heston’s ideas:  however wacky they may sound on paper, the finished product always seems to work, and manages to delight the senses.  So of course I said YES! Said pudding duly arrived and I thought I’d save it for a special occasion, which presented itself a couple of weeks later with the arrrival of my darling sister-from-another-mother Meeta and Saucy Spice Jamie who visited me in London at the end of November. After 2 hours of steaming, we upended the pudding basin on a plate and voila – we had what appeared to be a standard Christmas pudding.  But one slice was enough to reveal its secret – there really was an entire candied orange in the centre! Gorgeous!

As the pudding was far too much for the 4 of us to eat, I froze the remaining half and retrieved it this past weekend when we had friends over for lunch.  While I was chatting to one of my friends in the kitchen & finishing off my spiced butternut soup, she mentioned in passing that she had seen some crazy story about a pudding that was selling on E-bay for £250 and more.  Really, I asked?  What kind of crazy-ass pudding would you be able to buy for £300?  Does it contain real gold coins? Or maybe it’s brought to your door by a troupe of buff young guys in loincloths? Well… as it turns out, it’s Heston Blumenthal’s hudden orange Christmas pudding, which Waitrose has sold out of and which is changing hands at crazy prices on e-Bay!  I do believe she nearly fell off her barstool when I casually announced that she would be eating this very pudding for dessert within the hour 🙂

So how does £300 Christmas pudding taste?  I have to say,  having canvassed opinion from 10 different people… pretty damn good. For a start, there is SO much fruit and almost no flour involved, which is the right ratio in my book.  Then there is the booze – Christmas puddings need to be boozy and this one has 3 types of booze (brandy, sherry and rum if memory serves!).  It’s also particularly moist (even more so on the second heating) which is often a problem with Christmas puddings – maybe the orange really does help.  And then there is the tremendously impressive whole candied orange in the centre.  Not being a huge fan of candied peel I had my doubts, but they instantly dissipated on my first taste.  The orange certainly does seem to provide extra moisture, and the tartness takes the edge off the sweetness of the other fruit.  Genius.  Would I pay £300 for it?  Probably not – £13.99 yes, £300, no. But I can tell you if I knew the prices it would fetch, I would have sold it so fast it would make your head spin 😉 Onwards and upwards.  I am a great believer in karma – send good things out into the universe, and they will be returned to you.  So when Andrew asked me if I would attend an event in his place and do a guest post for him, I was happy to oblige.  Event attended & post written, I forgot all about it until a week or 2 later a parcel was delivered to my desk.  I hadn’t ordered anything and it wasn’t my birthday, so I was mystified.  But not for long – the tag on the beautifully packaged box read Bluebasil gourmet brownies.  Result!  A glance at the card revealed that my benefactor was in fact Andrew! Opening the package is as much fun as being a kid at Christmas:  ribbon, box, straw, tissue paper – and the excitement rising as you peel away each layer! Until at last the bounty within is revealed: heavy, ridiculously dense squares of chocolate, redolent with the scent of the spices and goodies baked into them. The first thing you notice about the brownies is definitely the weight.  Each brownie is a generous size, but these are heavy, even given their proportions.  The reason is, no doubt, their dense, chocolatey squidginess – kind of like sun-softened chocolate!  My first parcel from Andrew contained only the cardamom and the gingerbread flavours; but a second sample kindly sent to me by Bluebasil themselves contained four flavours, including some from their Christmas selection: Classic Chunky Chocolate; Gingerbread; Rudoph’s Rumnut; and Chocwork Orange with Cointreau. And the verdict? Overall I would have to say a thundering thumbs up!  The brownies are not cheap (they start at £11.50 for 6), but I really could not fault them in terms of texture or flavour.  The gingerbread has a density and a depth of flavour that really does seem to marry spiced gingerbread with dark chocolate.  The cardamom is gently warmed with the subtle taste of a spice that can easily overpower if not used judiciously.  The Rudolph’s Rumnut is a bit like having rum & raisin ice cream baked into a brownie – rum-soaked raisins jockey for position with brazil nut pieces in a dark chocolate matrix. The Classic Chunky Chocolate (also available in a gluten-free option!) is a square of pure decadence – a lighter texture than the others but still packed with flavour and those giant chocolate chunks.  But my personal favourite (and not just because I am a sucker for a clever name!) is the Chocwork Orange wth Cointreau.  Oh my word.  The lightly chewy crust gives way to a dense, almost melting chocolate interior, laced faintly with Cointreau and topped with an orange slice.  My colleague who helped me test these was actually moaning with pleasure at his desk, and he is a man that knows his cake! Bluebasil is a small company, meaning that extra care can be taken with the quality of the brownies, which are handmade rather than being the result of an industrial baking process.  The packaging also shows attention to detail far beyond what a large, faceless corporation could achieve.  Similarly, care is taken with the ingredients – local organic flour and eggs, and local butter are used; together with 70% dark Divine chocolate for the chocolate chunks – and it shows in the taste.  Brownies come in boxes of 6, 9, 12 or 15 in a range of flavours and you can have more than one flavour per box.  All Bluebasil brownies can be ordered by mail and they will send anywhere in the mainland UK (sadly, nowhere else at the moment).  And although Christmas orders have now closed, they will be open and trading again in the first week of January, and I can’t think of a better time to order some brownies to be delivered to a dear friend.  Or to yourself… because you’re worth it!