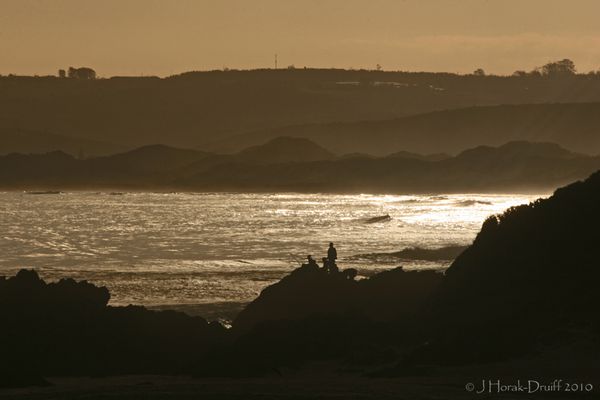 Although Keurbooms is generally considered to be a suburb of Plettenberg Bay, you need to take a drive out of town and across the Keurbooms river to access this strip of houses strung out along a curve of sandy white beach.

Clearly, we are not the first people attracted to this beautiful place – shell middens (piles of seashells and discarded food or tool preparation debris) found there indicate that the cliffs above Keurbooms beach were the site of some of the earliest human habitation in the country.  It is estimated that these strandloper (“beachcomber”) caves were inhabited between 70,000 and 20,000 years ago.  Much later in the early 1800s, as the village of Plettenberg Bay began to grow, farmers moved into the area east of the Keurbooms river and by the late 1800s, there were vines by the Keurbooms river from which passable brandy was distilled.  Today, though, it is largely a village of holiday homes.

Keurbooms village is named after a native South African tree, the keurboom (literally, “choice tree”) or Virgilia Capensis.  It bears lovely pink to purple flowers not unlike those of peas (a related species) and is common in the surrounding hills and valleys.

Have you entered the chocolate giveaway that I am hosting?  Hotel Chocolat will send one lucky winner in Europe, the USA or South Africa a box of their signature dark chocolates – all you have to do is leave a comment on this post by midnight on Mon 20 December.  What are you waiting for??

« French beans with toasted almonds and garlic
Heston’s £300 Christmas pudding and Bluebasil brownies – all I want for Christmas! »