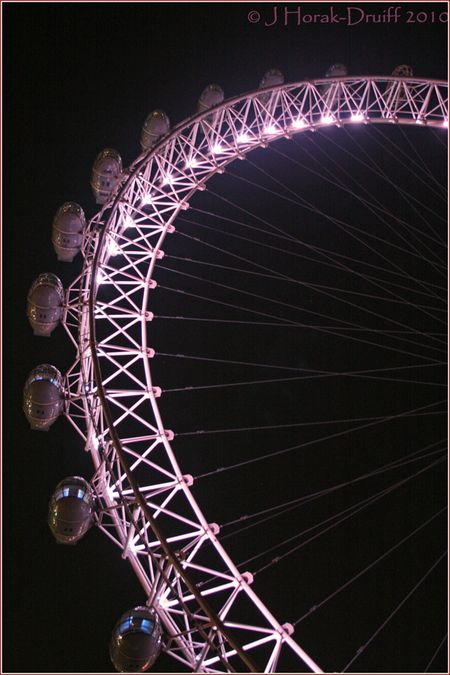 The London Eye is a giant ferris wheel on the banks of the Thames in London, approximately across the river from the Houses of Parliament. It is the largest ferris wheel in Europe and carries passengers in 32 sealed, air-conditioned pods attached to its external circumference.  Each year since its opening an average of 3.75 passengers have climbed aboard for the 30 minute trip and unsurpassed views of London, making it the most popular paid for tourist attraction in the UK. It was officially opened by then Prime Minister Tony Blair on 31 December 1999 with the intention that it should remain in operation for only five years, but it has become such a much-loved London icon that its future has now been secured for at least 25 years. Seeing the Eye makes me inordinately happy, and proud, to live in London.

This is part of a series of non-food photographs that will be published every Saturday on CookSister. All photographs previously featured may be viewed on the Saturday Snapshot archive pages.  Many photos featured in Saturday Snapshots are available to buy as high-quality greeting cards or prints in my RedBubble store. They make gifts, for friends or for yourself!