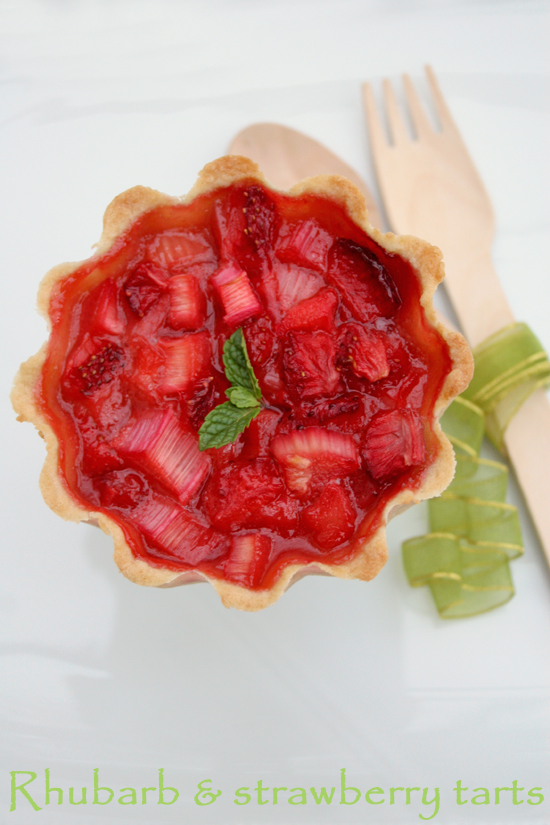 Thus spake the irrepressible Monty Python crew.  And as far as I’m concerned, recommendation don’t come better than that.  So when Lurpak buitter asked me a couple of weeks ago to bake something seasonal for them live on Facebook, is it any wonder that my thoughts turned to rhubarb tart? To me, there is something quintessentially English about rhubarb, as if it is the kind of fruit that Terry Pratchett might have made up had he been called upon to do so.  The fact that it is grown in darkened sheds and harvested by candlelight seems not too far from the idea that the world whizzes through space resting on the backs of four elephants and a giant turtle.  And the fact that it is a vegetable which they treat as a fruit, and not a particularly sweet one at that, speaks volumes about the English tradition of making do.  Eating rhubarb is like having the English psyche in a bowl.

These delicious little tarts make the most of the bright red colours of both the strawberries and the rhubarb, while allowing the berries to make up for the sweetness that the rhubarb lacks.  I made my mini tarts in 8 x loose-bottomed 3.5 inch fluted flan tins, but you could also make the recipe with 2 x 6 inch loose-bottomed fluted flan tins if you like.  I do not bake my crust blind, but you could if you wanted to; but then you probably have to cover the exposed crust with foil while the filling bakes, in order to prevent over-browning.  The tarts are fabulous – a light, flaky crust and a jammy filling that never becomes cloyingly sweet, thanks to the tart rhubarb.  Serve them as dessert, or at teatime – or as an indulgent breakfast treat! Wash and chop the strawberries and rhubarb.

In a large bowl, combine the chopped fruit, Prosecco, sugar, corn starch, lemon juice and ginger.  Stir well to mix.  Leave to macerate while you prepare the pastry.

Measure out the flour, icing sugar and butter.  Beat the egg yolk lightly.

In a clean mixing bowl, rub the cubes of butter into the flour, sugar and salt mix using your thumbs and forefingers.  The mixture should end up resembling breadcrumbs.

Stir in the lightly beaten egg yolk and iced water and mix until the dough comes together to form a ball.  If mixture is too crumbly, add iced water 1 tsp at a time, mixing between each addition.  Knead mixture lightly with your hands until it comes together.

Use a lightly floured rolling pin to roll the dough out on a clean surface.  Roll until the dough is about 3mm thick.

Cut or tear pieces of the rolled dough about the same size as your flan tins.  Using your fingertips, press the dough into the tin, making sure the base and sides of each tin are evenly covered. Melt a little butter and brush a thin layer over the base of each flan tin (this will help stop the tart crust from becoming soggy).  Chill the tins in the fridge for 15 minutes.  Pre-heat the oven to 180C.

Fill each flan pastry case with fruit.  Spoon 2 Tbsp of the macerating liquid into each mini flan tin (or 6 Tbsp into each large flan tin) but do not overfill – leave room for the liquid to bubble up during cooking.

Place flan tins on a baking sheet and bake in the lower half of a pre-heated oven at 180C for 45 mins (for mini flan tins) or 60 mins (large flan tins), until crust is golden and liquid has set to a jam-like consistency (NB – it will thicken upon cooling too).

Remove from oven and allow to cool before removing from tins.  Use palette knife to remove from base of flan tin.  Garnish with mint and serve with crème fraiche.

Looking for other sweet tart or pie recipes from bloggers  Try:

As some of you may know, I have entered my first travel writing competition!  Please click on the icon below to read my entry and if you like it, I would really appreciate it if you would rater the story in order to vote for me in the People’s Choice section of the competition.  Thanks!! 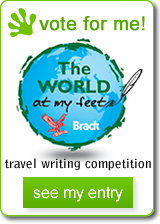