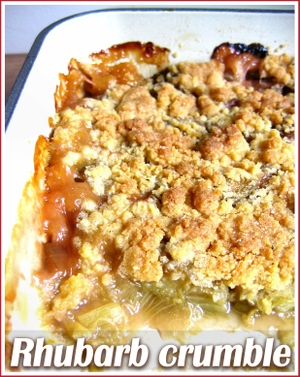 I have had a long acquaintance with rhubarb – in fact I first encountered it about 25 years ago while still at school.  But I only ate it for the first time about a year ago, and I didn’t cook with it until this month.  So what, I hear you ask, was my acquaintance with rhubarb then, if not culinary in nature?  Well, it’s a long story – and since this is a one-day and not a five-day match, I’ll try to give you the potted version.

The high school that I attended was a fine institution, but amongst its many virtues one could not count an overabundance of language options.  There were, of course, English and Afrikaans; also Xhosa (the local African language of the area).  But no French, German, Spanish or any other western European language – which was a little disappointing to a lingophile like me.  But what we did have was Latin.  Yes – the language that nobody speaks any more, although there were rumours that the headmistress and former Latin teacher Mrs Jenkins made her family speak Latin at the breakfast table…  But I digress.  After a year of Mrs Jenkins’ teaching us, she retired and in her place arrived Miss Gatley – fresh out of teachers’ training college (hi Gail!!).

I took to Miss Gatley from day one.  Here was a teacher who was a) not that much older than the pupils and b) in possession of a fully functioning sense of humour and c) easily distracted from the subject matter!  What more could one want??!  She was always cracking the most groan-inducing jokes and puns but we secretly loved them.  She would let us do song and dance routines in her class.  She took it in good spirits when we teased her mercilessly about being secretly in love with the science teacher (one of only two male teachers at an all-girls’ school and therefore the focus of a disproportionate amount of our interest!).  She laughed along when we giggled about her old-fashioned Hush Puppy shoes and her Ford Anglia car (which we said was so old that it came from the factory with square tyres because the wheel had not yet been invented…).  People used to look at me in shocked disbelief when I said Latin was fun – but it really was!  Not just the Latin but the constant side-shows that punctuated our every class.

In one memorable digression from the syllabus, Miss Gatley told us that when a crowd of extras on stage were required to produce a general hubbub, they would often be told to shout the word rhubarb (although not in unison!).  Apparently the movements that your mouth make when saying it look as if you are saying all sorts of things rather than just “la la la”, and the sound that is produced is a kind of indistinguishable low mutter.  We were all fascinated by this snippet of information and rhubarb, rhubarb, rhubarb became our class shorthand for long-winded babble – like blah blah blah.  And later that year, when I decided to write, copy and distribute a little subversive newsletter full of jokes at the expense of our teachers, I christened it The Rhubarb and the Honey Bee (Mrs Honey was our homeroom teacher; our class was B1; and rhubarb was our secret in-joke).  I wrote this newsletter for four years, and when most classmates think back to me as a schoolgirl it is the Rhubarb and the Honey Bee that they remember.

So it’s rather ironic that I had absolutely no idea at the time what rhubarb might be!!  I had 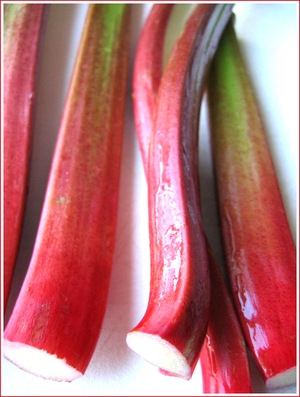 a vague notion that it was sorta kinda like beetroot, but of course I could not have been wider of the mark.  Rhubarb (or Rheum rhabarbarum) looks a lot more like celery than beetroot but is in fact closely related to sorrel and buckwheat.  Like celery, the edible part consists of long fleshy stalks or petioles topped with leaves (which are usually discarded), but unlike the green stalks of celery, the rhubarb’s stalks are a delightful shade of pinky red.  The plant is thought to have originated in Asia where there is a long history of its being used in Chinese medicine as a laxative.  The first records of rhubarb being eaten in England do not apear until the 17th century – unsurprisingly at about the same time as when sugar became more freely available to the common people:  rhubarb is very tart and I can’t imagine that eating it without sugar would be much fun!  Oh, and don’t eat the leaves – they are full of oxalic acid which is toxic to humans!

Although rhubarb should correctly be classified as a vegetable (we eat the stem, not the fruit), it is predominantly used in sweet dishes such as compotes, pies and crumbles, so that practice has arisen of referring to it as a fruit.  In fact, here in England it is one of the few fruits that is in season over the bleak months of January and February. But wait – how come the pictures of rhubarb that I have seen in magazines and the stalks I have eaten in restaurants are such a vivid red and mine shade into dark green?  Well, that’s because the stuff you get in the depths of winter is forced rhubarb.  This means that the young plants are planted in warm, moist sheds in the depths of the Christmas season’s freezing cold.  The warmth tells them to start growing – but what the sheds do is to keep them in total darkness.  So the plants grow tall and fast, searching desperately for the light, creating stalks of a far more delicate texture than their cousins that grow in the light.  The colour, even when cooked, is far more vibrant and the taste far more delicate.

My rhubarb was of the garden variety – the forced stuff disappears around March.  And although it looked pretty vibrant when raw, the colour largely dissipated upon cooking 🙁  Still, if you’re looking for an English dessert, it doesn’t come much more authentic than this.  To me, the particularly English skill of “making do” comes to the fore here – I mean, only a nation desperate for a fruity dessert in the frosty depths of February would think to persuade a celery-like plant to grow in total darkness so that they could stew it up with sugar and smother it in crumble… 🙂  The end result tastes rather like the world’s tartest apples – like a harbinger of the season of plenty to follow – but tempered with the sweetness of the crumble.  Yum.

The recipe I used was Nigella Lawson’s from Feast which was easy and worked well – my only complaint was that she reckoned this quantity serves ten – but to my mind that would be pushing your luck.  Six seems far more reasonable – and I am vaguely embarrassed to say that four of us actually polished this off…  I would also in future add ginger, although the original recipe does not call for it. 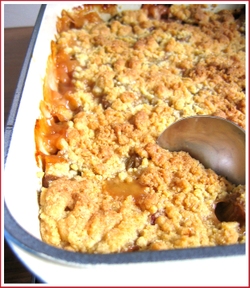 Preheat the oven to 180C. Combine the filling ingredients in a saucepan over medium heat and cook, stirring occasionally, until the butter is melted and the sugar is well dissolved. Turn out into a small oven-proof dish (the rhubarb must cover the bottom of the dish).  At this point I sprinkled the rhubarb generously with powdered ginger as I had none of the fresh stuff, but next time I might add some finely chopped ginger to the rhubarb mix in the pan.

Combine the flour and baking powder in a mixing bowl. Add the butter and rub into the flour mixture with your hands until you achieve a coarse texture like breadcrumbs. Stir in the sugars with a fork.

Cover the rhubarb filling evenly with the crumble. Bake 35 to 45 minutes or until bubbly and well-browned. Let cool at least five minutes before serving with custard or whipped cream.

This has been submitted as a contribution to the lovely Sam‘s Fish & Quips event to celebrate all things edible and English on 23 April – St George’s Day – and to show the world that English cuisine is no laughing matter!