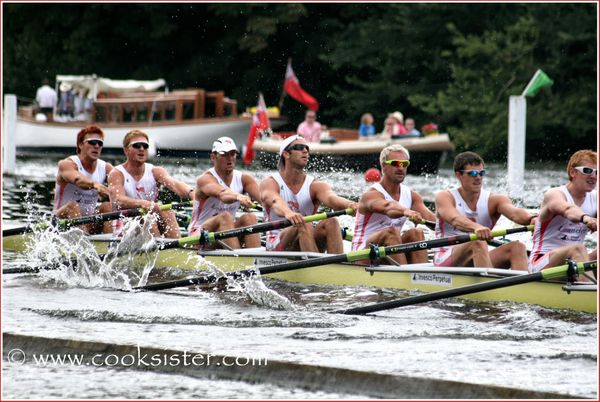 A rather belated snapshot this week, and the reason for the delay should be apparent from the subject matter.  The Henley Royal Regatta has taken place at Henley-on-Thames every summer since 1839, when the racing took place on a single afternoon.  The Regatta proved so popular with oarsmen that the racing lasted for two days from 1840. In 1886 the Regatta was extended to three days and to four in 1906. Since 1928 its increased popularity meant entries exceeded the permitted numbers in several events, and so Qualifying Races are now held in the week before the Regatta to reduce the number of entries to the permitted maximum.  Today the Regatta extends over five days and attracts up to 35,000 spectators.  In 1851 H.R.H. Prince Albert became the Regatta’s first Royal Patron. Since the death of The Prince Consort, the reigning Monarch has always consented to become Patron, hence the “royal” in the title.

We spent Saturday on the riverbank, cheering on the South African pair (although the picture depicts a Leander crew

« Serrano ham, goats cheese & honey crostini for a housewarming
Does My Blog Look Good in This – July 2009 »