You are here: Home / Waiter, there's something in my... / Smoked haddock with flageolets in a creamy mustard sauce from Nigel Slater 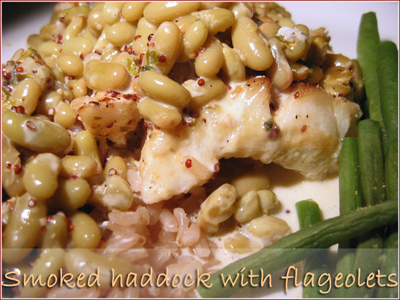 Late, late, late again – for my own event.  But in fact, this time my lateness is a literary device – to illustrate practically the fact that I was a relative latecomer to pulses.  (Well, that’s my story and I’m sticking to it!)

Did you have to study something called “Health” at school?  From about age 10 to 12, we had this opaquely named subject on our curriculum, and I guess in some ways it was a foundation course in human biology.  Because we were only little, the subject didn’t require critical essays or intricately labelled diagrams of what the Islets of Langerhans actually do. But we did talk a lot about foods, what our bodies needed in terms of nutrients, and where we might get them.  I remember being told that we needed to eat meat, fish, eggs and dairy for protein; fruit, vegetables and cereal for fibre; and sugar and starchy foods for energy.  But somewhere in this diagram there was also a small aside – if you could not for some reason get your proteins from animal sources, you could get them from legumes or pulses.  All the other foodstuffs were relatively easy to draw – but legumes?  They had me stumped.  You see, pulses were not big in our house when I was growing up.  Considering I had a father who at 85 still regards anything that is not derived from either an animal or sugar cane with great suspicion, it’s a miracle we were allowed to have vegetables at all.  Clearly, my mom decided not to push her luck and try and sneak legumes past him too! The closest we got to lentils as children was the corduroy frog-shaped beanbag toys that my mom used to sew for us, which were filled with lentils.  It didn’t occur to me as a child that I could fill myself with lentils!

The first pulses that I remember enjoying were beans – specifically the beans in Aunty Evelyn’s three-bean salad (which I really must post this summer).  Suddenly, tinned butter beans and baked beans (which I had always regarded with extreme suspicion) became quite palatable.  But as for things like chickpeas and lentils, I would have to wait until I was in my late twenties before I got to know and love them.  I discovered chickpeas with a bang when, on new year’s eve 1999, I scoffed an entire tub of hummus by myself and it was easily the highlight of my evening (clearly, it was not the most exciting NYE that I’ve had…!).  And lentils followed them into my diet about a year later when a recipe for a lentil, avocado and feta salad caught my eye. 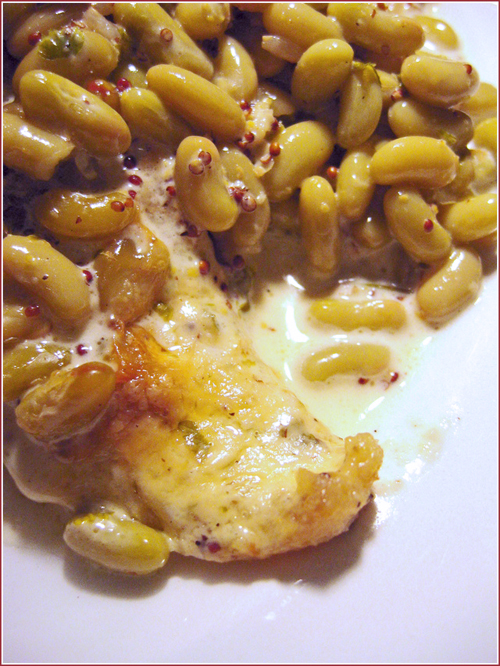 And from then on it’s been one big legume love-in for me.  Chickpeas hot, cold, mashed, marinated – bring them on.  Lentils on their own, spicy lentils under salmon, lentil soup – yes please!  And we won’t even mention my ongoing love affair with broad beans and cassoulet… So the fact that I picked pulses as the theme for this month’s WTSIM is really a no-brainer.  The big dilemma for me was what to make?  I could be boring and make the same lentil dish that I always make, with mushrooms and feta cheese; or I could use one of my Nice & Spicy spice packs to make a vegetarian curry, substituting chickpeas for chicken.  Or… I could make something soft, warm and comforting from my culinary boyfriend, Nigel Slater.

As I’ve said before, Nigel Slater gets my pulse racing – or, in this instance, my pulses racing!  In fact, his cooking got my pulse racing long before I even really knew who he was.  I keep a book of recipe clippings that I have lifted from various magazines in this country and South Africa over the past couple of decades and one night in search of inspiration I was leafing through this book.  This haddock recipe caught my eye, not only because I hadn’t had haddock in years, but also because it was a cold night and I needed soothing comfort food.  I made it and was absolutely smitten – it was creamy, beany, smoky Nirvana.

So why was I even slightly surprised when I bought Kitchen Diaries and found out it’s one of Nigel’s?  He’s the man – and this is the recipe.

SMOKED HADDOCK WITH FLAGEOLET BEANS IN A CREAMY MUSTARD SAUCE

Remove the skin from the smoked haddock and place the fish in a lightly buttered baking dish. Pour over the milk, then add enough water almost to cover the fish. Tuck in a couple of bay leaves and grind over some black pepper. Bake at 200C for about fifteen to twenty minutes or until you can pull one of the large, fat flakes of flesh out with ease. Drain and discard the milk.

Rinse and re-butter the baking dish, making sure you remove any bits of skin from the milk left behind. Rinse the beans in a sieve under running water, then empty them into a mixing bowl. Pour in the cream and a couple of tablespoons of milk, then chop the parsley and add it together with the mustard, a grinding of black pepper and a little salt. Go easy on the salt as the smoked fish is already pretty salty.

Spoon the beans into the dish and lay the fish on top, spooning some of the creamy beans over the top to keep it moist. Turn the oven down to 180C and bake for about forty minutes, until the cream is bubbling and the sauce has thickened around the beans.

Nigel serves his his with steamed spinach, and I admit that it is a lovely combination, but steamed green beans as pictured above work just as well.

This post is my entry for this month’s Waiter, There’s Something in My… event where the theme was pulses, hosted by ME!  I am slowly working my way through all your entries and hope to have the round-up posted later this week.