Who would guess by looking at it that it has such a colourful history?  It’s been cultivated for thousands of years (nobody knows exactly how long) and was already a well-loved vegetable in the first century AD when Pliny wrote about it.  According to Pliny, the most esteemed leeks were those grown in Egypt and his contemporary, Roman Emperor Nero “to improve his voice, used to eat leeks and oil every month, upon stated days, abstaining from every other kind of food, and not touching so much as a morsel of bread even“.  In fact, Nero was such a fan that his leek binges earned him the nickname of Porophagus, or leek-eater.  Which just goes to show that it’s a bad idea to call your emperor names because he will probably turn into a bloodthirsty tyrant and play the fiddle (or more historically correct lyre!) as the city burns down around your ears 😉

The leek is also the national symbol of Wales (together with the daffodil).  Although we can’t be certain how this came about, one legend is that in 640 AD the Welsh fought a battle against Saxon invaders in a leek field.  To ensure that the Welsh soldiers could distinguish each other from the enemy, King Cadwaladr ordered them to wear leeks in their hats and they achieved a glorious victory. (Other versions of the story mention the Battle of Agincourt as the scene of this event.) This tale has become further ingrained in folklore after it was mentioned by Shakespeare in Henry V, but whatever the truth is, you will find Welshmen around the world wearing leek pins on their national day, 1 March.

It seems the English are pretty fond of leeks too – the growing of prize, oversize leeks is something of an obsession in the northeast of England.  The tradition that began in the late 19th century among miners, with men competing for cash prizes to grow the largest specimens.  This was the inspiration for the 1997 British TV comedy-drama King Leek in which one grower bets the family home on his leeks. Wives become “leek widows” when husbands sleep in their garden allotments for weeks before the show, guarding their leeks from knife-wielding competitors bent on destruction. No, I am not making this up. Historical shenanigans aside, leeks are not only the delicious and slightly sweeter cousins to onions – they are also good for you.  Apart from containing B vitamins, vitamin C, folic acid, magnesium and calcium, they are also high in fibre and may lower cholesterol levels. There are any number of fantastic leek recipes out there, from the classics like vichysoisse or cock-a-leekie to the more adventurous – I’m opting for a deliciously creamy and comforting chowder. 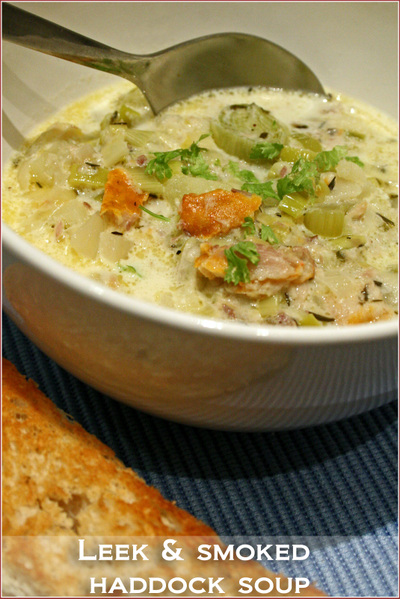 Heat the oven to 180C.  Place the fish fillets in a shallow ovenproof dish with the bay leaves and pepeprcorns.  Almost cover with milk and cook for 10 minutes until just cooked and the fish can be flaked.  Discard the milk, pepeprcorns and bay leaves.  Remove the skin and gently flake the fish, discarding the bones together with the skin.

Warm a large pot over gentle heat and melt the butter.  Add the onion, thyme and celery to the pot and cook gently for about 20 minutes until soft.  Wash the diced potatoes until the water runs clear, drain and add to the pot with the leeks and 850ml water.  Simmer for 45-60 minutes.

Pour the cream into the soup and, when bubbling, add the flaked fish.  Remove from the heat immediately, garnish with chives and serve with crusty bread.

The leek picture in this post is my submission to the Snackshots event created and hosted by my friend Michelle at the Greedy Gourmet.  The theme for the month is leeks and the deadline is… today!  So get leek-snapping 🙂