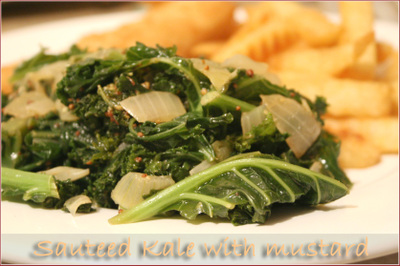 It seems that winter is just not releasing its grip on this little island.  Every time we have a crisp, sunny day, everyone thinks “woo hoo – winter is finally over!”.  And then the next day dawns and there are gale force winds, driving rain and even snow.  So despite my longing for broad bean crostini, braais and summery salads, I’m afraid we will still be cooking wintry food for a while.

One of my favourite discoveries since I’ve come to England (and one that it now being touted as a superfood, at least in its infancy) is kale.  Seeing as I am an unreserved fan of the entire brassica family, I wasn’t hugely surprised to find that this type of cabbage is another member – part of the Acephala group of the Brassica Oleracea family.  The Latin buffs among you (and I like to think there’s more than just me!) will have noticed from the name that this is a part of the brassica family distinguished by the fact that its leaves do not form a compact head, making it more closely related to collard greens than, say, Savoy cabbage.  The most likely reason that I didn’t realyl know this vegetable when I was growing up is the fact that it likes cooler climates, but that aside it appears to be bullet-proof:  it’s untroubled by poor soil and most pests that bother the other brassicas.  Nutritionally speaking, it’s a powerhouse, containing high quantities of Vitamins A, K and C as well as lutein and zeaxanthin (both carotenoids which are essential for healthy eyes).  It also contains more Calcium and Magnesium than Brussels sprouts, is high in fibre and low in fat.  And as it’s grown right here in England, your meal will have a relatively small carbon footprint!

Until the end of the Middle Ages kale was one of the most widely grown vegetables in Europe and as it was easy to grow it was one of the vegetables that people were encouraged to grow in the Dig for Victory campaign in England during World War II.  Maybe it was this association with times of hardship that made it rather unfashionable in England after the war (although it persisted in the Irish dish of colcannon), but it certainly didn’t wane in popularity in Germany.  Around the towns of Bremen and Oldenburg, as well as in Schleswig-Holstein, most communities will have an annual kale festival where large quantities are consumed and a “kale king” is chosen, and “cabbage tours” are organised by social clubs in the springtime.

It was only when I was researching this post that I discovered that kale is thought to have originated as a result of human-aided selective breeding of wild mustard plants, so as to promote plants with larger leaves.  But clearly there was some sort of collective race memory of the plant’s mustardy origins at work when I selected to sautee it and then stir in a generous dollop of mustard – the flavour works perfectly with the naturally mustardy kale leaves.  And it wasn’t any old mustard either – this was my new favourite mustard in all the world:  Cajun wholegrain mustard from the rather wonderful Hawkshead Relish Company.  Try it once and trust me, you’ll be hooked!

Wash the kale leaves carefully – dirt, grit and even little critters may be hiding in those curly folds!  Slice the leaves into slices approximately 2.5cm wide.

In a large frying pan or wok, heat the olive oil.  Add the onion and garlic and sautee over medium heat until translucent but not browned.  Add the kale and sautee until just wilted but not overcooked – the stems should retain some crispness.  Add salt and pepper to taste, remove from heat and stir in the mustard.

I served mine with fish and chips (chips lurking in the background of the picture…) but it would probably work well accompanying almost any meat, or it makes a great basis for a warm salad.

I’m submitting this post as my entry to this week’s Weekend Herb Blogging, kindly hosted by Ramona at The Houndstooth Gourmet.  The deadline is today so get moving if you want to take part!