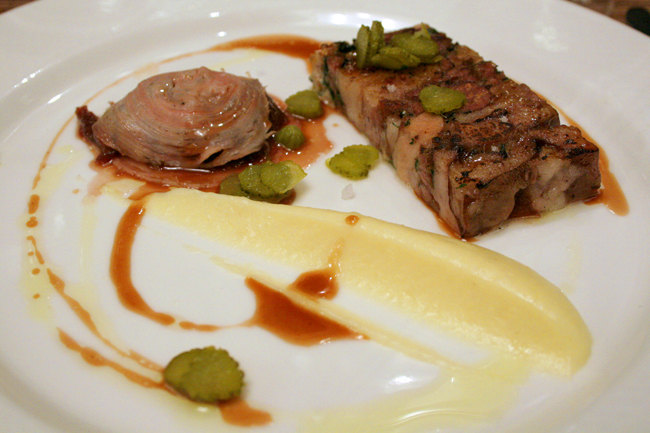 I’ve been eating out a lot lately. The waistband of my trousers tells me so.  We seem to have had an endless parade of visiting friends and old acquaintances to catch up with, and London being London it is almost always easier to meet at a restaurant somewhere halfway between our respective houses.  So the bank balance dwindles and the waistbands get tighter – but oh what a great way to go!

Two weeks ago my friend Olwen and I decided to venture out of our comfort zone in the City and into the West.  Well, not that far really – only to Mayfair, just the other side of Regent Street.  The reason for our visit was Wild Honey, the recently opened restaurant from Anthony Demetre of Arbutus fame (and Putney Bridge before that, where he earned his first Michelin star). I have been to Arbutus (sadly, only once) and loved everything about it, from the room to the menu, to the fact that all the wines are available by the carafe, to the food itself.  In fact, there is not much I’d change about Arbutus.  OK, maybe I would change its latest table-turning policy of 2 hour dining slots, surely the most ghastly thing about high-end London dining.  But apart from that, I’m smitten.

Wild Honey had been hotly anticipated when it opened in the summer and generally the critics have said favourable things.  It occupies the space that was formerly MPW‘s Drones, so it’s quite a traditional high-ceilinged room with loads of wood panelling. It’s a somewhat cavernous space, rather too brightly lit for my linking and not nearly as welcoming as Arbutus.  The stridently modern paintings on some of the walls also seem rather out of place in such traditional surroundings, and a couple simply aren’t the kind of picture I’d usually choose to look at while I eat – but hey, vive la difference!  The front of house staff are smiley and charming and immediately make you feel welcome, and we were promptly shown to our table.  But with there being only two of us, we were shown to the tables that are invariably the most cheek-by-jowl in the establishment.  Even by London’s standards, though, the 2-seater tables were ridiculously close together.  Neither Olwen nor I are of gargantuan proportions, but we were unable to squeeze between the tables unless either our table or our neighbours’ was moved aside.  And I do always so enjoy giving complete strangers an up close and personal view of my bum as I ease past their hors d’ouevres! 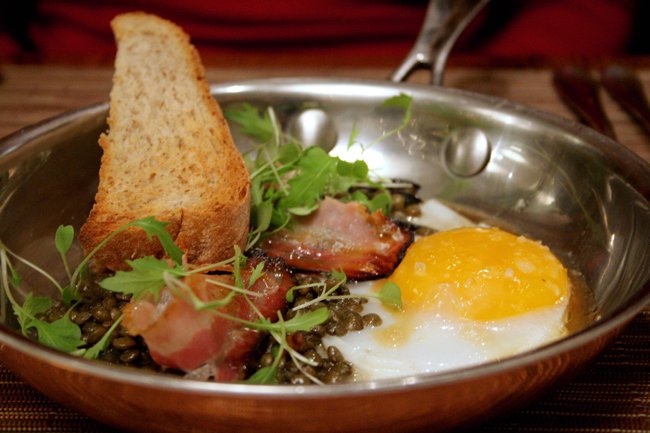 But enough of that – on to the food.  In the same civilised way as at Arbutus, all the wines are available by the carafe, so we ordered a carafe of Chilean Secreto Viognier with our starters.  The also menu has much in common with Arbutus in that it is robust food made from often unloved ingredients upon which care and attention has been lavished.  OK, so it’s no longer exactly ground-breaking stuff, but it works so why tinker.  I started with the braised pig’s head terrine (to which a fair number of reviewer column inches have been devoted), while Olwen went for the duck egg salad with lentils and pancetta, served in a little copper pan.  I must say that, visually, Olwen’s starter won by a mile,  It looked enchantingly lovely and she assured me that it tasted as good as it looked.  My terrine, although not as visually gorgeous, was a showstopper in the taste department. It came as a little rectangular slab sliced off the whole terrine and then, by the looks of it, grilled so that the outside crisped up a bit.  For anyone who was worried that the dish might resemble what it was in life, fear not.  Would you ever have guessed the provenance of that innocuous little slab?  But there was no mistaking the taste – fatty, piggy goodness; very rich but utterly delicious.  It was served with cornichons and caramelised red onions (sandwiched between two further paper-thin slices of pork), and a smear of potato puree to rival Joel Robuchon‘s 70% butter creation.  Really.  I was very impressed.

For our main course, both of us had Elwy lamb:  two cuts of (equally, meltingly tender) lamb served with curly kale.  On the side came a little cocotte of potatoes boulanger, heavy with the cooking fat of the lamb. Absolutely, sinfully glorious, even if you aren’t (lke me) a sucker for anything served in a little metal cocotte!  To accompany this we had a carafe of excellent New Zealand Forest Pinot Noir. 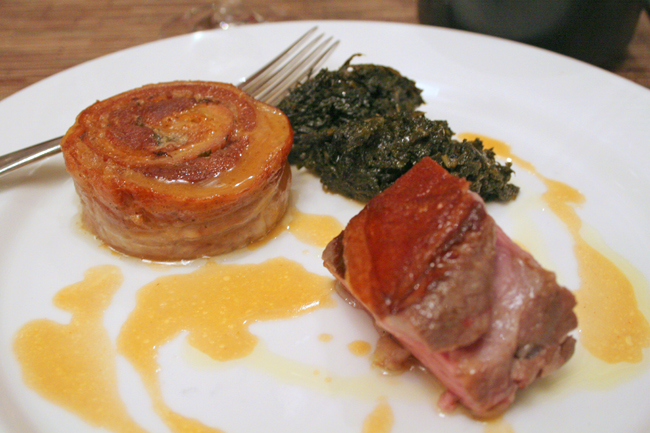 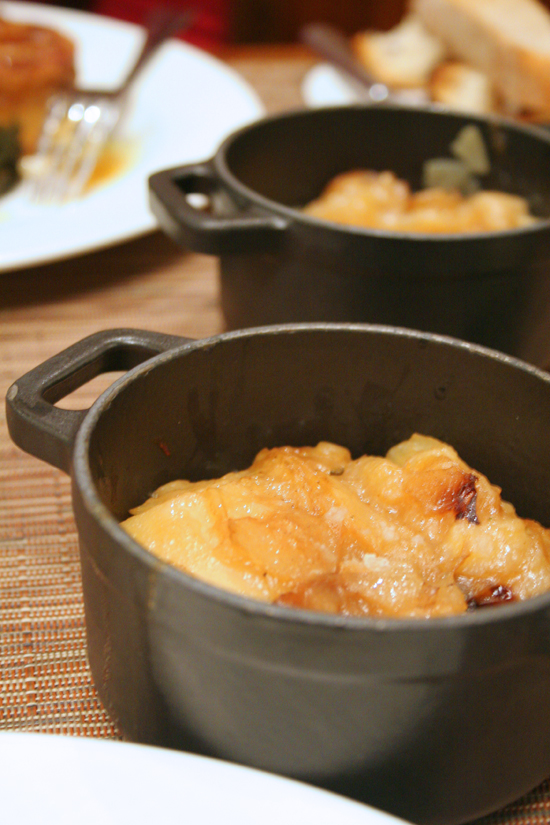 By the time we got to dessert, my appetite had waned considerably, but in the interests of science I persevered.  Olwen had something featuring pears (apologies – I can’t remember exactly what) and I had the wild honey ice cream with crushed honeycomb (of the the Crunchie variety, not from the beehive!).  The ice cream was nice but nothing to write home about, but the honeycomb was delicious with a real honey flavour.  Again, not ground breaking, but good and solid.  Service was friendly and attentive throughout the evening, only flagging later when the place was full to capacity (as far as we could see).  The only annoyance was that after they cleared our dessert plates, they brought us the bill – unasked and without offering us coffee.  Not fatal, but an odd annoyance in the middle of otherwise good service.  And speaking of the bill, the whole lot with service and water came to a very reasonable (for Mayfair, at any rate!) £45 each. 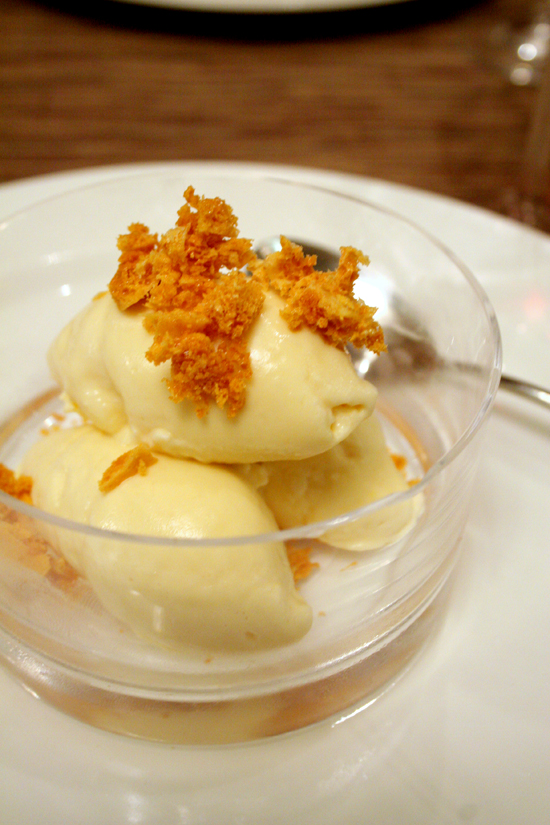 So was I blown away?  Erm, no.  I liked it – I liked the unpretentious food and I love the carafe system, for the wine.  But somehow to me the place lacked star quality.  Not to say that I wouldn’t go back or that I can fault anything in particular.  But it was like a date with that nice boy from accounts.  You can’t really find fault and know you ought to like him more than you do… but somehow the spark just isn’t there.