It’s a funny old world, the world of restaurant reviews.  Here in London, if you read a few different publications, you will soon see where the latest “place to go” is, because in the space of two weeks or so, all the London restaurant critics worth their salt will visit it.  I saw it happen with The Salt Yard (where I’ve been but still have to blog about), Glas and Bar Shu (where the specialities are offal and lots of chillis – so I won’t be going there any time soon!!).  One of the latest places that caught my eye owing to its ubiquitous presence in the review columns is Arbutus from chef Anthony Demetre, and seeing as all the reviews were excellent and mentioned reasonable prices for excellent food, how could I resist paying it a visit?

The restaurant occupies premises in Frith street, previously occupied by Bistro Bruno.  The interior was mercifully was mercifully cool on a very hot, sticky day during the recent heatwave and is decorated in lovely restful neutrals.  I was particularly fond of the textured panels on the walls and the play of the halogen downlighters across their texture.  But wait – we weren’t here for the decor!  So Johanna and I settled in for a chat and perused the menu.  One of the “unique selling points” (much as I dislike the phrase) of Arbutus is the fact that ALL the wines on the winelist are available by the glass.  They have apparently invested in a snazzy industrial-size wine bottle vacuum machine that sucks the air out of half-full bottles and preserves the wine in pristine condition.  This makes a welcome change from most London restaurants where I find the selection of wines sold by the glass to be a) too limited and b) composed of only the most yawn-inducingly nondescript or the most eye-wateringly expensive wines.  And seeing as Johana was driving (and therefore not drinking) and I wanted only a glass of wine, it’s a good thing we chose Arbutus!  After we had dithered over the wine list, I finally chose a Navarro rose as my glass of choice. 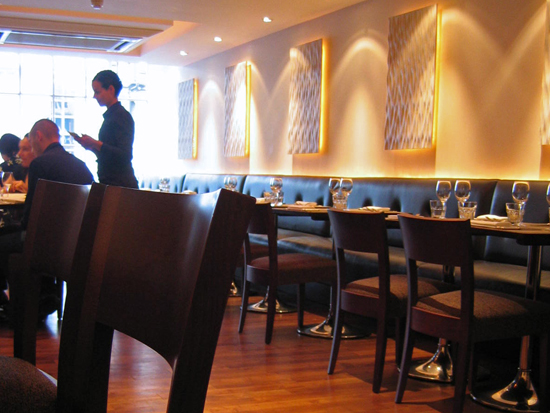 And so, to the menu.  In the interests of blogging research we decided to have three courses each and not order the same thing if possible. (This is tricky as we can almost always be relied upon to make a beeline for the same dish!).  The menu was full of enticing choices and we spent an inordinate time debating our choice – which is always a good sign in my book! In the end, Johanna chose to start with razor clams cooked in garlic & served on their own shell.  I have often seen razor clam shells on the beach but have never tried them, despite being a fan of shellfish:  you just never see them on South African menus, so I was quite eager to try a bite of Johanna’s.  It’s quite hard to describe them – somewhere between very tender calamari and the flesh of a scallop, and definitely the most meaty and satisfying shellfish I have tasted.  They were simply cooked which really let you savour the delicious taste and texture of the clams themselves, and for a starter, the portion was ENORMOUS. I, on the other hand, was feeling carnivorous and started with the breast of lamb carpaccio.  This also came in a generous serving and very attractively presented:  delicate pink slices of just-cooked, fatty lamb topped with raw almonds, broad beans and Parmiggiano.  This was just fabulous.  It was served lukewarm so that the endearing fattiness of the lamb didn’t congeal into an unappetising blobbiness, and the crunch of the almonds and broad beans provided a nice contrast to the silkiness of the meat.  It was one of the nicest and most satisfying starters I’ve had in a long time. 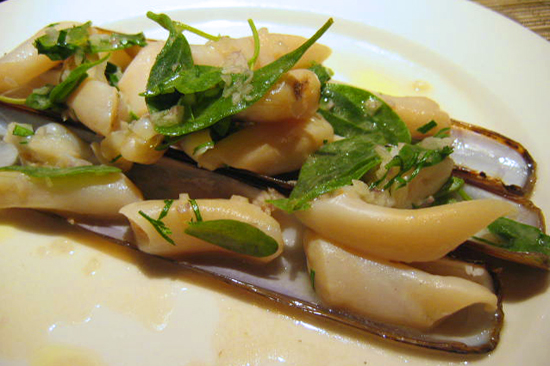 For my main course I chose the poached roast chicken – the idea is to poach the chicken first so that it stays succulent and then to finish it by roasting, ensuring a delicious crispy skin.  This came with English peas, potato gnocchi and pea shoots in a rich pea and foie gras sauce.  It was another pretty much perfectly executed dish, light and summery yet deeply satisfying.  The chicken was indeed a perfect combination of juiciness and crispiness and the sauce was intensely flavoured without being too righ.  But oh… the gnocchi. The gnocchi were as God intended gnocchi to be – delightfully pillowy and not at all like the rubbery stuff often served as gnicchi.  I would happily have eaten a full plate of only the gnocchi and the sauce – they were that good… Johanna chose the sea bass with a rosemary dressing and fennel puree, and a stuffed tomato.  I didn’t taste it so can’t express an opinion, but Johanna seemed happy with it and it was also attractively presented and perfect light fare for a hot summer evening. 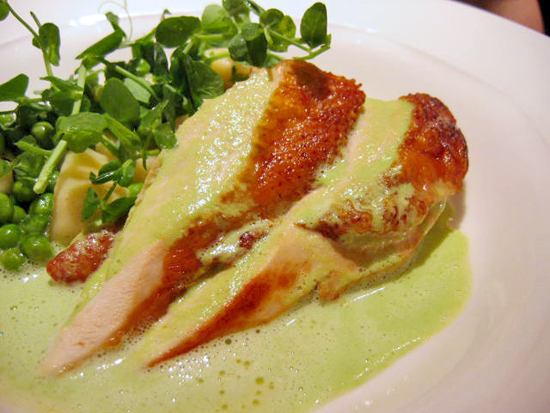 By the time we had worked through the very generous starter portions plus the main course, we found that our good intentions regarding two desserts had somewhat diminished.  As a compromise we shared a vanilla crème brule with langues de chat. I had not come across the term before but even my rudimentary knowledge of French could tell me that it literally means “cat’s tongue”!  So I was understandably a little apprehensive abotu what might be served with the creme brulee 😉  But it turned out to be nothing more outlandish than a thin, flat cookie with rounded ends (rather like a flatter boudoir buscuit).  The creme brulee was perfect – slightly warm, dotted with specks of vanilla pod and perfectly caramelised.  And you’d be surprised at how good a cat’s tongue can taste 😉 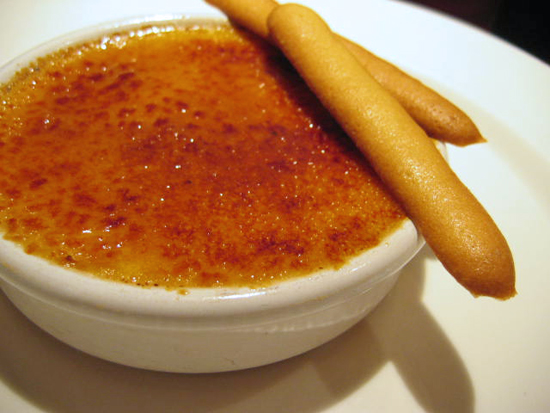 But the most pleasant surprise was yet to come:  the bill.  For all this beautifully presented and flawlessly executed food, we each paid just over £30, including service and water!  So if you are in the mood for a classy meal that won’t break the bank, or even if you just feel like having a few different glasses of unusual wines, I can highly recommend Arbutus.  For once, I agree with the critics – this place really is a find.

« Cherry clafoutis for a summer dinner in our garden
Foodbloggers’ Guide to the Globe: 5 things to eat before you die »