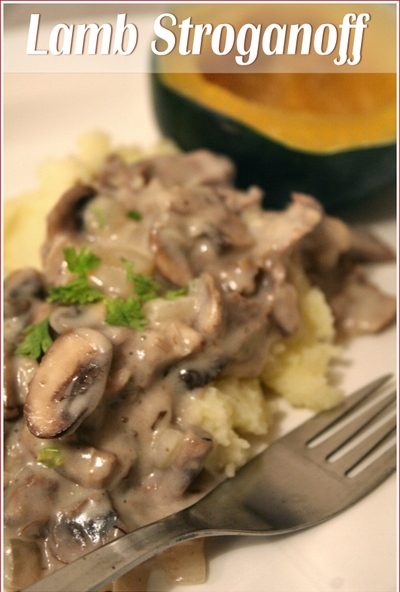 One of the great things about winter is that all of a sudden I have develop a craving for hearty stews and chunky roast joints of meat.  Somehow, these just don’t seem to be appropriate in the summer, but as soon as the weather turns chillier they take on a whole new appeal.

Apart from their general deliciousness, there is also the ease-of-cooking aspect, because in both cases the long and slow cooking time means that I get to pop something in the oven, go upstairs, take a bath, have a glass of wine, check e-mails and all of a sudden dinner is ready!  Like magic.

Last week, one of the more comforting meals we had was Nigel Slater’s wonderful slow-roast lamb on chickpea mash (soon to be blogged!).  This meant that for most of the week, there has been a giant lamb bone with the last of the meat clinging to it sitting in my fridge, daring me to make something with it.  Now if it were summer, I would probably have been making lamb and chutney sandwiches for work every day, but seeing as it’s pretty chilly out there, I’ve been gorging on soups from EAT instead.  Because we are going away this weekend, though, my mind has recently become more sharply attuned to what’s in the fridge and how I can use it up.  Hmm, let’s see… leftover roast lamb, half a punnet of chestnut mushrooms, some cream…  Bingo!  Lamb Stroganoff!

Of course, the classic dish is beef Stroganoff (traditionalists, avert your eyes!), a recipe usually accepted to have Russian origins and containing beef, sour cream and mushrooms.  It seems that there was a 19th century Russian noble called Count Pavel Stroganoff who was something of a gourmet and a bon viveur.  The name of the dish is generally attributed to him allegedly because either he or his chef came up with the recipe.  But since a recipe by this name appeared in Elena Molokhovets’s classic Russian cookbook in 1861, well before his reputation as a gourmet had developed, it seems more likely that the recipe had been in the Stroganoff family for years and became well-known through Pavel’s entertaining. (Incidentally, the 1861 version calls for beef cubes, rather than strips, cooked with bouillon and mustard – no onions and no mushrooms.)

Seeing as I chucked tradition out of the window when I started cutting up the cooked lamb instead of raw beef (!), I guess I have some leeway as to the ingredients, but I tried to stick to the meat-cream-mushroom formula.  And it turned out pretty damn well, even if I say so myself. NOTE – as I was making this up as I went, quantities may not be exact.  Increase or decrease as you see fit. 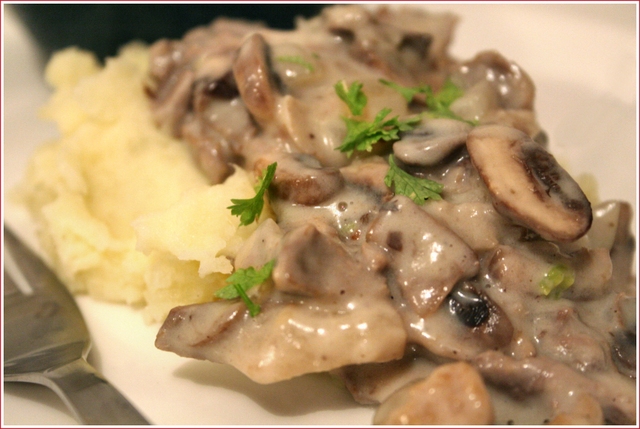 Cube the lamb, crush the garlic and slice the onions and mushrooms.  Heat the butter in a heavy-bottomed frying pan and sautée together the onions, garlic and lamb.  If the lamb is cooked like mine, sautée the onions and garlic until the onions are translucent and beginning to brown, then add the lamb to heat through.  Add the mushrooms at the very end – they need minimal cooking.

Once the mushrooms, onions, lamb and garlic are done, remove from the pan with a slotted spoon and keep warm.  Stir the flour into the pan juices, stirring to pick up any bits sticking to the bottom of the pan.  Cook for a minute or two, then add a splash of sherry (optional), the paprika and rosemary, followed by the stock.  Mix well and remove from heat before adding the cream, stirring all the time to prevent lumps.  Return to heat and stir to get a smooth csauce. (If the sauce is too thick, add a little milk to thin it.)

Stir the lamb, onion and mushroom mix into the sauce, heat through and serve on a bed of creamy mashed potatoes.  And, in my case, with gem squash on the side!