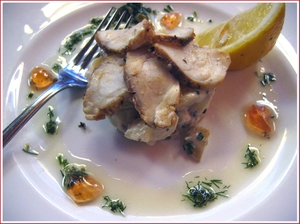 Following on from my post about our delightful food blogger picnic at the Henley Royal Regatta, I though I’d tell you about the wonderful meal we had the night before in Shiplake, just up the road from Henley itself.  Andrew very kindly invited us to stay over and so Nick and I drove up from London on Friday after work.  All was smooth sailing until we got to the north-western corner of the M25 and then things ground abruptly to a halt.  Okeydokey.  Lots of panicky phonecalls to Andrew later, we finally arrived in Shiplake – considerably later than I would have liked, but at least Andrew had acted as the advance party and secured our precious table.  As it was, the staff had been eyeing those two empty seats speculatively, so Andrew was rather glad to see us!

The Baskerville is the epitome of a small (affluent) village pub – usually the only one around and packed exclusively with locals.  If you’re lucky, such establishments will take pride in their locally-sourced ingredients and put on a fine culinary show.  If you’re not, you can expect microwaved-to-within-an-inch-of-oblivion chicken kievs from Asda.  Luckily, the Baskerville falls squarely in the former category and, in fact, it won the Country Dining Pub of the Year award for 2007 (awarded by the Good Pub Guide).  On my previous visit here with Andrew, we had a drink at the bar and it was indeed full of quiet locals.  However, seeing as this is the Big Social Weekend of the year around these parts, the place was packed to the rafters with blazered and bladdered visiting Hooray Henrys, talking at top volume about their sometime rowing exploits and their trust funds, or suchlike.  Not exactly ideal, but I doubt anywhere in the area would have been any different that night!

No sooner had we sat down than we were served, and soon we were happily sipping our wine (the El Coto Crianza Rioja 2000) and perusing the menu.  I started with the irresistible smoked monkfish which the restaurant apparently smoke themselves.  It was served on a small potato and pickle salad, along with daubs of rather pretty chile jam (pictured above).  Not only did it look lovely and delicate, but the flavours really worked together.  The dense exture of monkfish lends itself rather well to smoking and the salty, smoky taste married well with the sweet chile jam.  A lovely light and summery starter.  Andrew started wth scallops which were among the plumpest I have ever seen, in a lightly curried sauce.  These were so delicious as to make me momentarily regret having ordered the monkfish but my regret was short-lived.  As I may have mentioned before,  I find it very hard to resist duck if it is on the menu, and so for my main it will come as no surprise to hear that I had the duck breast, served with new potatoes.  It was done to total perfection – moist and pink on the inside but with skin done to crispy deliciousness.  It was also one of the biggest portions of duck breast that I have ever had the pleasure of meeting – I could not finish it!  Both Nick and Andrew had the lamb which was fall-apart tender and again, generously proportioned.

The only painful part of the evening came when we attempted to pay (why is this always the hardest thing to do in any restaurant?). There was some sort of problem with their card machines and although the restaurant was packed, only one was working. Despite asking for the bill twice, all we caught were tantalising glimpses of waitresses clutching the one precious machine, darting here and there in the restaurant, but never anywhere near us. In the end we stood up en masse and loitered furtively by the bar in an attempt to grab the attention of whoever had the machine in their possession at that moment. The waitress who eventually processed our payment seemed to forget halfway through the transaction what she was doing and Nick had quite a job getting his card back from her.

But that (I hope) transient complaint aside, there was a lot to like about the Baskerville Arms. The food speaks of good ingredients and is neither fussily prepared nor served. The room is pleasant (especially where we sat in the bay widow by the bar) and I suspect if would be even lovelier if you went when it was emptier. In fact, this is the kind of pub that everyone dreams of having up the road from their house but sadly, very few of us do. When that big lottery win comes in I guess I’ll just have to move to Shiplake…