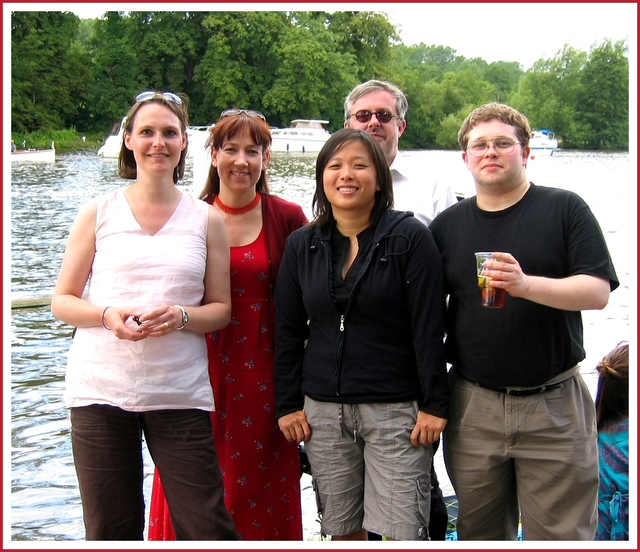 What can I say: faith can move mountains.

Or at least rainclouds, it would appear.

No, I haven’t come over all mystic – I just wanted to impress on you what a leap of faith it was on my part to press ahead with plans for a riverside food blogger picnic in the middle of the wettest summer on record in England! It had rained for weeks (or so it seemed) in the lead-up to the Henley Regatta and indeed, news reports from the initial days of the regatta indicated that for the first time, the rigid dress code in the enclosures had been relaxed enough for ladies to wear wellington boots with their below-the-knee frocks!  Having heard this, a number of bloggers (and other assorted friends!) took fright and decided to pull out at the last minute.  But not me.  No, I’m the woman who planned a 100% outdoor wedding and reception in autumn in South Africa with no backup plan.  I laugh in the face of bad weather – and more often than not, the weather smiles back at me.  So on the Friday night of the regatta’s final weekend, Nick and I drove across London to Shiplake to have dinner and spend the evening with Andrew, and we were packed for a picnic, come what may. My joy when I was awoken by bright sunlight streaming through the lounge windows on Saturday morning knew no bounds!

So as in previous years, only a little earler than usual, we carried our extensive picnic gear 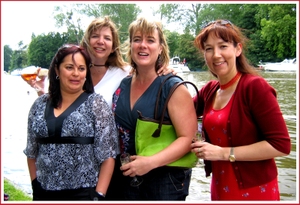 all the way from the station, across the bridge and along probably 1.5km of river bank to Remenham.  I have to say, I have never seen the place so sodden: the area in front of the little shops before the Barn Bar had needed temporary plastic flooring to prevent a Glastonbury-like mudbath.  But our preferred spot on the river bank was mercifully relatively dry, blissfully unoccupied and (important for later) shaded.  So Andrew, Nick and I spread a few blankets and started unpacking our gear, waiting for the others to arrive.  Seeing as we had Pimms but no Lemonade, we decided to toast our good fortune with some rather delicious New Zealand sparkling wine that Andrew had brought – the excellent NV Allan Scott Methode Traditionelle.  A lovely fine mousse and fruity flaavours overlaying the traditional Champagne-style toastiness – anda steal at under £12! Hot on our heels were my friends Lisa, Alex and Nathalie, followed by Johanna, who had texted me before she left home to ask whether to bring wellies or flip flops! Our penultimate arrival was the lovely Rachel of Yumchia, another foodie lawyer, and last but not least came Bill who had been delayed leaving Paddington.  (specially for Kalyn:  Top photo shows from L to R: Johanna, me, Rachel, Andrew and Bill.  Lower photo shows Alex, Nathalie, Lisa and me).  Once we were all present and accounted for, I have to say that we wasted no time in getting ourselves fed and watered.  Come and see what we had…

First to come out was obviously the Pimms, with Lisa doing a sterling job of chopping all the traditional fruit.  But (astonishingly) man cannot live by Pimms alone, and so Alex brought out her rather impressive container of croustades and I broke out my perennial picnic favourites:  peppadew and Parmesan muffins. 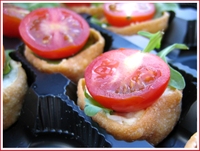 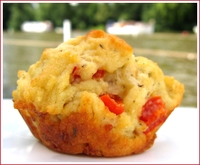 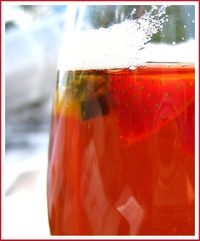 But it wasn’t long before we were hungry again and so by about noon we had unpacked our smorgasbord of picnic delights.  Below, from left, we have:  Johanna’s salmon and asparagus couscous; Alex’s Parma ham, tomato and basil tart; my smoked mackerel pate; Bill’s Roquefort quiche; Rachel’s pasta salad; and Rachel’s duck pancakes. 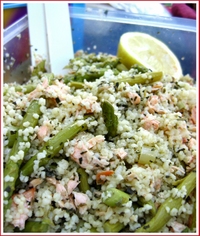 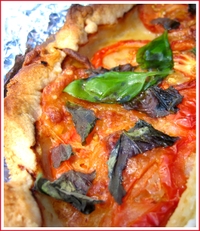 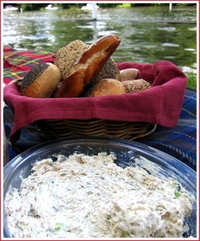 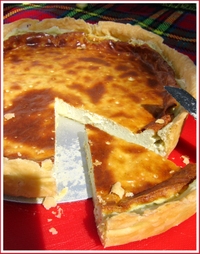 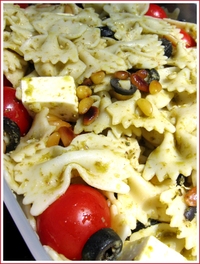 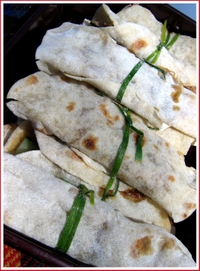 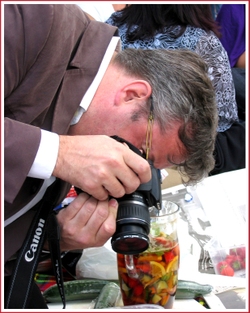 And as usual, there was an flurry of food photography (nicely illustrated by Andrew over on the left), curiously regarded by all the other picnickers (clearly not bloggers!) and general passers-by.  In between glasses of Pimms and delicious food (I was particularly taken with Bill’s astonishingly smooth Roquefort quiche and Rachel’s yummy little pancakes), some of the girls strolled down to the little collection of traders’ stalls on the other side of the Barn Bar, selling the usual collection of rowing kit, every colour of pashmina in the world, fabulous hats and jewellery.  I was particularly taken with Wonderland jewellery where the charming proprietor chatted to me for ages and patiently let me try on everything in the store.  The designs are all her own and set with beautiful semi-precious stones.  A little further along, Lisa learned the true meaning of a can-do attitude when we encountered Muddy Dog handbags.  They do a gorgeous range of bags in every colour of the rainbow and are happy to combine different elements of various bags to create a bespoke bag just for you, and boy, are they friendly and charming!  Lisa fell in love with the lime green bag (in the second picture of this post) and ordered a fuchsia one to match.  They are wonderful people and I encourage all bag-ladies like us to pay their site a visit.

Oh, and there was some rowing too.  In particular, the super-successful South African pair 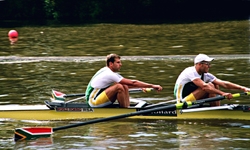 consisting of DiClemente and Cech rowed past us with their blades painted in the colours of our national flag.  After not a lot of support from the bank, the unsuspecting pair suddenly rowed past a group of about 20 South Africans (including some of our party) and the river bank just erupted in screams of “Go South Africaaaaa!!!”.  Nick said later you could actually see the grins on their faces as they heard us.  And they went on to win the race! 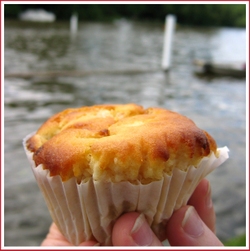 After all that excitement, some sugar was in order, 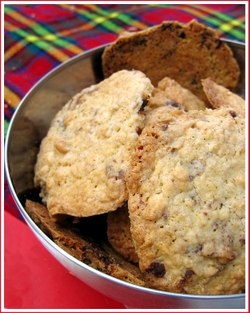 so we broke out the desserts. Johanna had brought the drop-dead delicious white chocolate and raspberry muffins on the left.  They were wonderful, with the perfect balance of sweetness and tartness, and oh so pretty.  Andrew, on the other hand, had made one of Moira‘s recipes – in particular, her oatmeal chocolate chip cookies.  Can’t recommend these highly enough, really – they are chewy and oaty and chocolaty and HUGE:  everything a cookie should be.

And that, as they say, is that.  By the day’s end we were all a little chubbier, very relaxed, pickled in Pimms and very pleased with ourselves for having kept the faith and going ahead with the picnic despite the…um, variable weather.  It was lovely meeting Rachel and seeing everybody else and I hope we can all meet back there again next year.  And if you still haven’t had enough of Henley, see my Henley Regatta 2007 Flickr album for more photos.

« Waiter, there’s something in my… meatless barbecue!
Raspberry and white chocolate cheesecake »