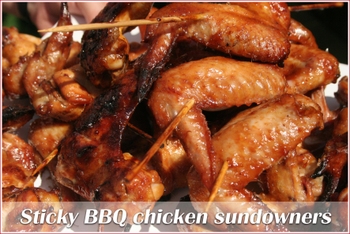 I love food on sticks.  Hot, cold, sweet, savoury… you name it, I love it.  I don’t know what exactly it is about food on sticks that’s so perennially appealing either, but I’m guessing it’s that whiff of the fairground or of streetfood that appeals to me.

When I think back to my childhood, I remember the total fascination that I had for candy floss.  We only really had it once a year when Playland (later Pleasureland) rolled into town with their rollercoaster, the House of Horrors, the bumper cars, the swings, the myriad of games to win soft toys and, of course, the funfair food.  I don’t think we ever ate any “real” food there (my parents were never fans of either hamburgers of hot dogs!) but I always made sure I got some candy floss.  I was fascinated by the machine that seemed to make this pink fluffy stuff as if by magic, and I loved how you got a ball as big as your head to carry around on a cardboard stick.  For an extremely slow eater like me, having some sort of candy on a stick that didn’t melt messily was paradise!

Later, there was my toffee-apple-making phase, which started when our local supermarket started stocking toffee apple kits: basically a bunch of lollipop sticks and a bag of sugar with red food colouring added).  My brother, my best friend Andrea and I would take over the kitchen for the afternoon, making the caramel (while my mother hovered by the phone, ready to dial 911 should the need arise!) and getting threads of red sugar all over everything.  The result was 6 gleaming red apples sitting on a strip of wax paper, some of which would get eaten and some of which would have their toffee picked off, the apple slightly nibbled and then tossed away.  The irreverence of youth.

And still later, Saturday nights in our house meant only one thing:  Magnum PI on TV at 9p.m. while having chicken sosaties (kebabs) from Woolworths.  The whole family adored the sosaties and thus my lifelong love of sosaties began.   Myfavourite thing on a braai has for years been chicken sosaties.  Most supermarkets in South Africa (and definitely the Spar near my house) sell these as a matter of course.  At the butcher’s counter, there are various flavours of chicken sosaties – sweet & sour, peri-peri, lemon & herb and BBQ being popular flavours.  These are particularly delightful because they are made out of thigh, not breast meat, meaning that they have more fat and remain far more succulent than diced breast kebabs.  Why they are not more popular in this country, I do not understand.  I have in a never-to-be-repeated fit of nostalgia grabbed a pack of chicken kebabs off the Sainsbury’s shelves, only to discover that they were chicken nugget-style reformed chicken mush, shaped vaguely into cubes and totally inedible cardboard once they had been on the braai.  McSosaties, anyone??

And then of course, there are chicken sundowners.  These are a fairly recent addition to the pantheon of South African braai meats but they have caught on in a big way.  Basically, it’s marinated chicken wings, each threaded along its length onto a skewer, ready for the grill.  Stretching the wing out like this means that you get properly crips skin all over (usually, the skin in the folds around the joints remains resolutely uncrispy), and the stick means you can serve it straight off the grill – guests simply hold the skewers until the meat is cool enough to eat.  No mess, no fuss! 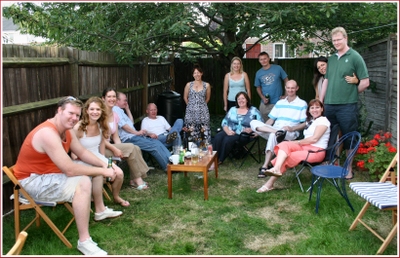 Seeing as we recently had 14 people at our house for the annual Big South African Braai, the concept of no mess, no fuss was doubly appealing, which is how Nick and I came to make these fantastic sticky sundowners as appetisers.  The recipe is an adaptation from our dearly beloved South African Kettle Braai Cookbook and it was a hit – so much so that Nick and I had to scramble to make sure we got a taste before the guests finished them all!

Now if I can serve mint Magnums as dessert next year, my eat-on-a-stick-no-mess-no-fuss-entertaining bliss will be complete… 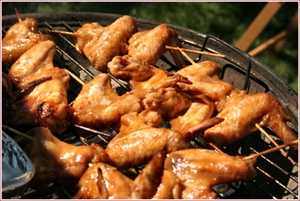 Combine all the marinade ingredients in a small saucepan and heat until warmed through, stirring to create a smooth mixture.  Place the chicken wings in a large (or a few smaller) resealable freezer bags and carefully pour in enough marinade to cover them.  Make sure you squeeze out as much air as possible before sealing the bag so that the wings are properly coated.  Allow to marinate in the fridge overnight.

On the morning of the braai, soak wooden or bamboo skewers in water for 10 minutes, then thread the wings onto skewers.  If you are feeling energetic, for proper sundowners the wing should be extended in a straight line and skewered along its length.  But let me assure you that with slippery marinated wings, this is tricky, so we simply skewered them two to a skewer as you see in the picture. (For the Real Deal you should skewer the wings before marinating, but then you will not be able to use the freezer bag method described above.)

Prepare an indirect fire on your kettle braai and place a foil drip pan between the coals.  Place the chicken wings on the grid over the drip pan. Cover the kettle and cook for about 20 minutes, brushing with marinade once during this time.  Serve hot off the grill.