It’s funny how you will cross town, brave weather and take time off work to visit certain restaurants, while others are very much on your beaten track, but somehow you just never get round to visiting them?  I suppose it’s the same kind of thing as people who live by the sea but never go to the beach in their hometown.  Or people who’ve lived in London for years and never been to the Tower of London:  you kind of think it’s always going to be there, so we can leave it for later. Although I’ve been going to Borough Market for almost as long as I’ve been living in London, I have never actually visited Fish! restaurant slap bang in the middle of the market.  That is, until a friend and I went out to dinner after work recently and found ourselves in the London Bridge area at a loose end on a chilly Wednesday night.

Fish! opened in 1999 and is owned by Tony Allan (who incidentally also owns Jarvis Fishmongers in Kingston).  Its goal of serving fresh, sustainable fish, simply prepared and reasonably priced has remained unchanged over its lifetime, and it was nice to discover that it is one of the first restaurants to work with the Marine Stewardship Council.  This means that you can be sure the fish you are eating has been harvested from sustainable populations – and few garnishes taste as good as virtue these days 😉  The building that Fish! occupies rather aptly resembles a fishtank – the walls are largely made of glass and you can see in while diners can peer out and up at Southwark Cathedral.  After a quick check of the menu on the door, I think I was finally enticed in my the promise of sticky toffee pudding on the menu – that and fish pie!  The space is sleek and modern with chocolate brown and orange accents providing a warmer contrast to the steel and glass, and an open kitchen so you can see your fish being prepared.  Although the tables were quite close together, we were seated by a window and never felt particularly encroached upon by our neighbours.  The menu is a reasonably straightforward affair – about ten starters and ten main courses, plus a selection of fresh fish which you can order steamed or grilled with your choice of sauce.  As you can see from the picture above, the menu consists of tickboxes so that you can see at a glance what fresh fish is available on the day of your visit.  Service was friendly and efficient and soon we were settled in with a bottle of wine, awaiting our food. 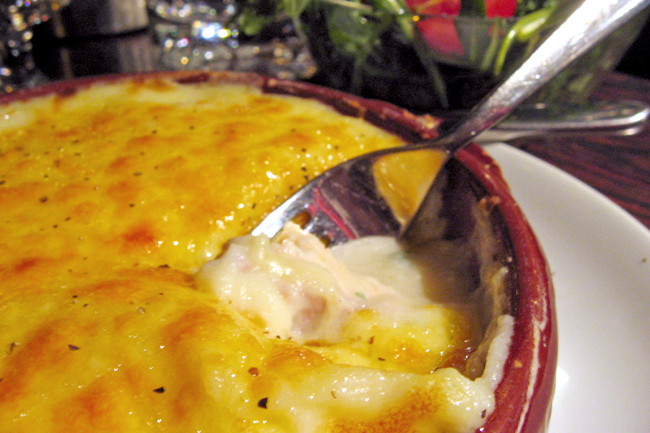 Neither of us had starters and for my main course, I simply could not resist the classic fish pie, while Olwen chose the fishcake with beurre blanc and spinach.  I must say, Olwen’s fishcake certainly was one of the classier fishcakes I’d seen – a generous crumbed patty sitting atop a pile of wilted spinach – and she pronounced it excellent.  But for me, the winner was fish pie all the way.  Diet food it wasn’t.  White fish and salmon in a creamy sauce (although I must say I missed the smoky taste of smoked haddock) with a smattering of prawns, topped with creamy mashed potato and then generously smothered in cheese.  Gilding the lily, I know, but who can argue about the irresistible deliciousness of potato and cheese?! If I have any criticism it’s the general short supply of prawns in the pie, but other than that it would be churlish to complain about so satisfying a dish.  And the rocket and tomato salad that I ordered on the side in a vague attempt to combat scurvy was generously sized and made a nice counterpoint to the richness of the pie. 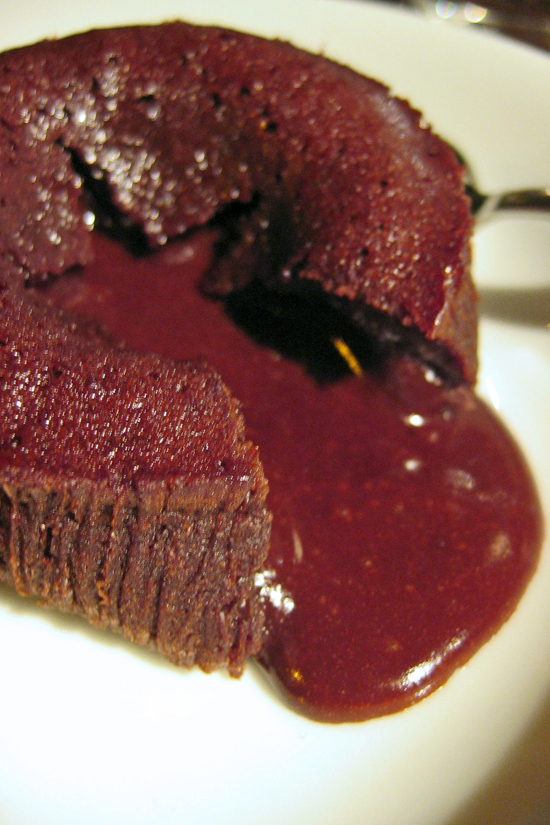 Despite having had more than an elegant sufficiency (and then some!) by the time we’d finished our main course, we felt that we needed some fortifying sugar before we braved the chilly night outside.  I had already snuck a peek at the dessert menu on the way in, so I knew it was the source of all good things – in particular sticky toffee pudding!  But at the last moment my resolve failed and I plumped for my old favourite:  the chocolate fondant.  I must say that I was a little dubious when it arrived – it looked pot-bellied but not at all moist, apart from the depression in the centre of the top crust.  But one poke from my spoon and it revealed its true colours with a river of bittersweet chocolate.  Really rather good.  Olwen on the other hand stuck with her first instincts and had the sticky toffee pudding.  This turned out to be a little individual pudding and it lived up to its description 100% – very sticky and very toffee-ish, surrounded by a little moat of custard.  The deep satisfaction of eating a warm pudding on a chilly night is, to my mind, almost reason enough to spend winter in the northern hemisphere. 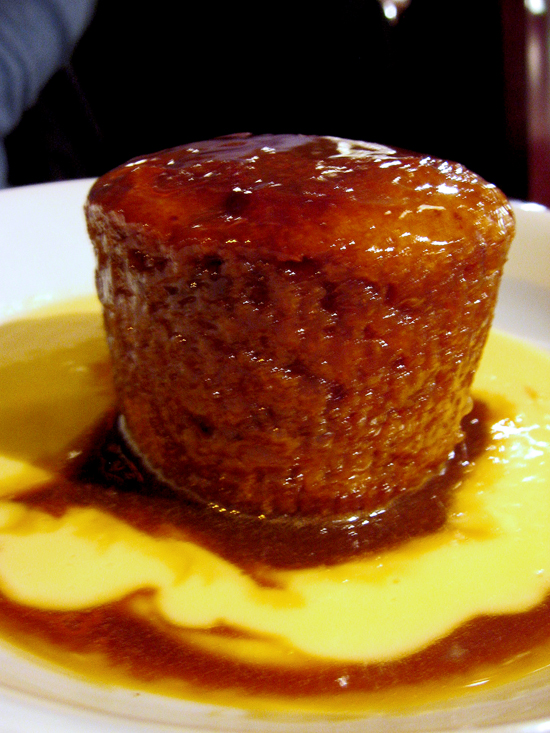 Our bill with a bottle of wine and service came to £33 each which, although not bargain-basement cheap, was quite reasonable for the quality of food we had.  I would like to go back and try some of their fresh fish, maybe just grilled with lemon butter and a side salad.  And lightly garnished with a warm pudding 😉

Fish! is a great place for a weeknight get-together with friends, or a long summer lunch when the sun comes out and the tables and chairs on the terrace come with a great view of the Southwark Cathedral.  If it’s fresh sustainable fish you’re after at prices that won’t bust your budget, this is the ideal place.