You are here: Home / In my pantry / Hostess Twinkies… and more First, my little phallic chiles (there’s a potential Googlewhack if ever I saw one!) and now this.  Anybody want to put two and two together (so to speak!) and guess what my this post is all about?

Let me start by saying that it’s a good thing that the preferences we have when we’re kids old aren’t the preferences that stay with us for life.   And I’m not limiting that statement to things like a hatred of Brussels sprouts or olives – oh no, I’m including all sorts of preferences.  Like my childhood penchant for ceramic cats.  Good grief, I would have had an entire house full of the damn things by now, all needing dusting!  (We won’t even discuss my collections of novelty erasers and writing paper!).  Or how much I loved Richard Clayderman with his floppy hair and his particularly successful brand of elevator music.  Or my heartfelt pleas to my father to buy me a pink Volkswagen Citigolf.

But even before these, I had a long list of things I dearly desired, and this list was largely inspired by my obsessive reading of Archie and Richie Rich comics.  Anybody remember those?  Man, I loved them. At a time, South African kids were inundated with American comics – I graduated to Archie from my beloved Micky Mouse magazines – full of foreign concepts, like schools with lockers and plentiful television sets.  But even more fascinating to me were the advertisements for exotic foreign products featured in the back of the magazines.  Oh, how dearly I would have loved to own a bowl full of Sea Monkeys!  And oh, how I lusted after one bite of a Hostess Twinkie.  That golden sponge, that luscious cream filling – surely one bite would be enough to send me into culinary ecstasy?  But alas, the things we saw advertised were seldom on sale in South Africa and I was doomed to a Sea Monkey-less, Twinkieless childhood.

Fast forward a couple of decades and here I am, living in London, earning a crust and entertaining myself by blogging about food.  As I’ve mentioned before, one of the great things about food blogging is the fabulous folk you meet – and they don’t come much more fabulous than Moira.  Although Moira and I had corresponded since sometime in 2004, we only finally met up last year for the London food bloggers’ salt and butter tasting – and Moira arrived bearing gifts! As a military wife, she had access to a store on the base that stocks all manner of American goodies and man, she had gone to town!  I think I’ve already mentioned the peanut butter chips and the chocolates, but she also bought an array of Hostess products for that all-American experience –  and to finally give me a taste of the stuff I craved so much in childhood.  Here’s what she brought: 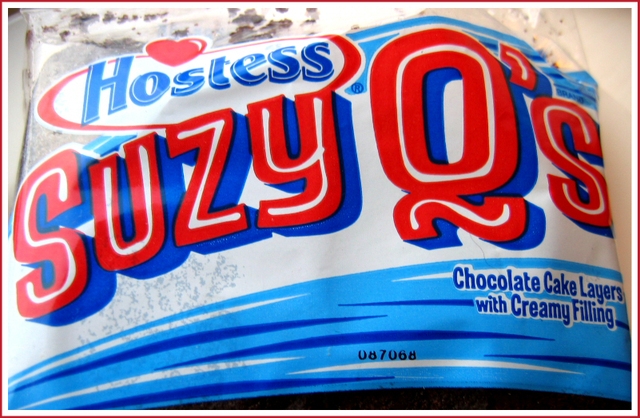 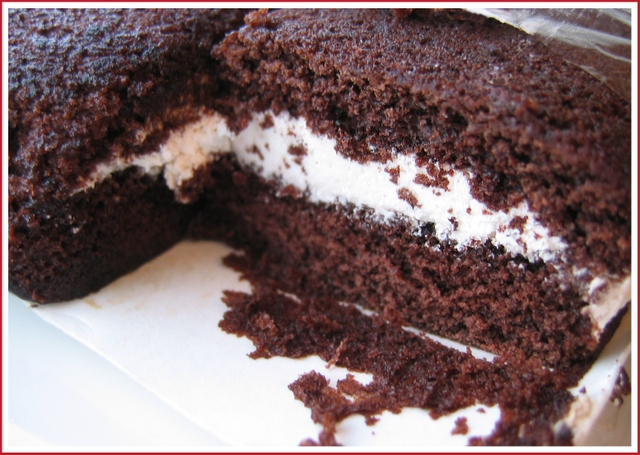 These are described as “chocolate cake layers with a creamy filling” – and they do exactly what it says on the box.  The package contains two squares about 8cmx4cm of dark, moist and not objectionable chocolate cake, sandwiched with tooth-achingly sweet and artificial-tasting cream filling.  Rest assured, no actual cream has ever been anywhere near this concoction, but I suspect it has an impressive array of E-numbers to its name 😉 To be honest, it doesn’t taste too bad – the sweetness of the filling is somewhat offset by the cake.  Of course, you’d have to close your eyes and not think of the ingredients (I don’t think “organic” or “natural” features much), but then if you’re eating Suzy Qs, you’re not doing it for your health! 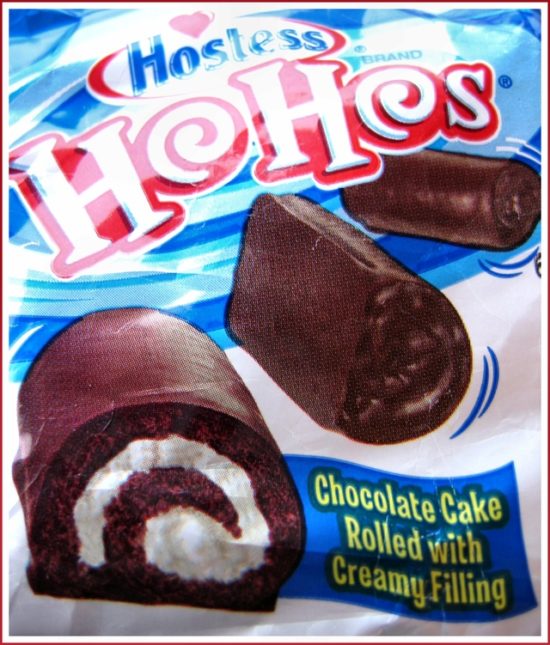 These are described on the package as being “chocolate cake filled with creamy filling”, but a more accurate description would be chocolate mini-Swiss rolls coated in chocolate.  They also come in a 2-pack and are probably also about 8cm long.  The cake component is somehow not as dark or as moist as the Suzy Qs and not as nice.  It also does less to counterat the filling, which is the same saccharine white goo as used in the Suzy Qs.  And the problem with coating any Swiss rolls with chocolate is that… it falls off at the slightest tap! As you can see in the photo, large chunks of my pack’s chocolate coating had not survived the journey from America and struggled even more once I cut into the cakes.  This makes for a rather messy eating experience!  Overall, I didn’t much like these.  The chocolate was grainy and awful, the cake not as good as the Suzy Qs and the filling… well, enough said.  For me, it’s a “No, no!” to more Ho Hos! 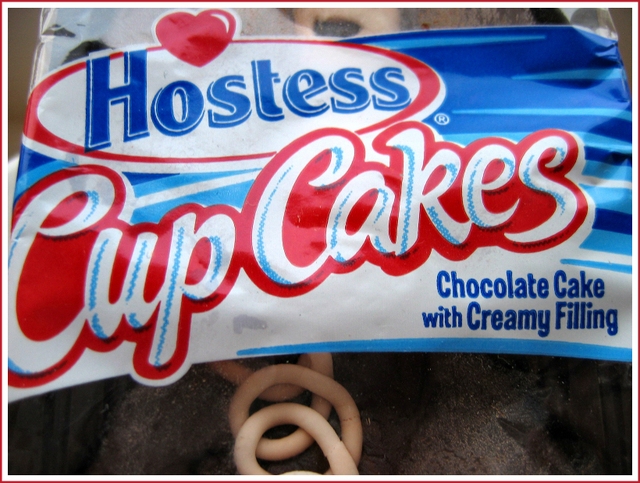 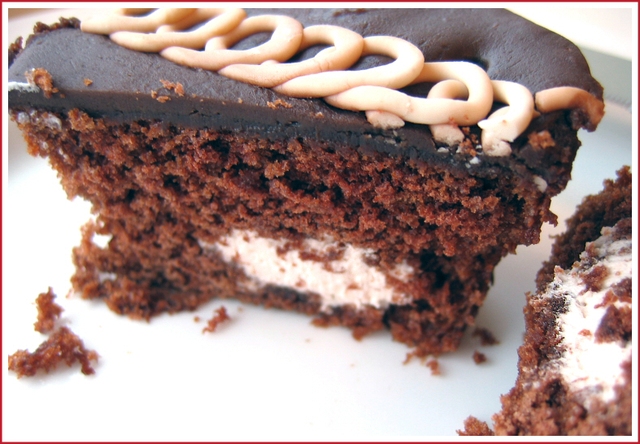 Again, this is described as “chocolate cake with a creamy filling”, but they neglect to add that there is a solid slab of icing on top too, which sets these apart (visually and taste-wise) from Suzy Qs).  Apparently, the spiral of white icing on the top of a Hostess cupcake is an identifying feature as distinctive as the Coca-Cola contour bottle – who would have known!  Taste-wise, I found these had more in common with Suzy Qs than with Ho Hos.  The cake was dark and moist and not too bad, with a blob of the usual creamy filling somewhere in the lower third of the cupcake.  But what put me off was the icing.  For a start, it looked like a thick silicone mat that had been cut to size and plonked on top of each cupcake – you could peel the icing off whole! And it was sweet enough to make my jaw ache which is never exactly a recommendation in a cupcake.  So on a balance, I don’t think I’ll really be having more of those either. 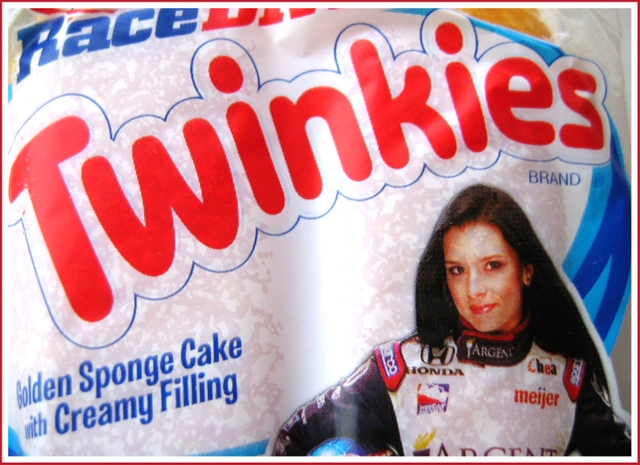 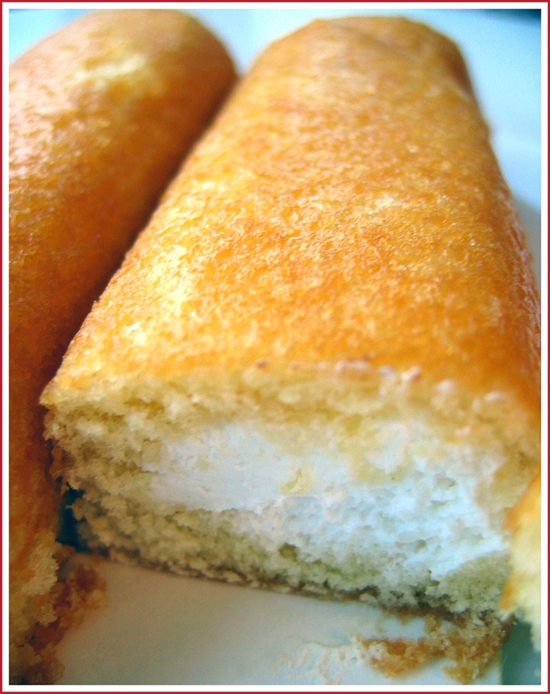 And last but not least, we get to the confection that I first lusted after:  the Twinkie.  This is described as “golden sponge cake with a creamy filling”, and you can’t deny, looking at the pictures that it is sponge and it is indeed golden!  As for the filling – good grief, there must be a gigantic vat of this all-non-natural-ingredients white stuff brewing all the time at the Hostess factory! It just shows up everywhere…  Of all the products I tried, this has the greatest ratio of filling to cake, so if you like the filling, go to Twinkies.  The cake is… well, it’s plain sponge, no more no less, and the filling is white and sweet.  But somehow I have to admit there is something compelling about the little buggers.  It’s rather like KFC – you know how bad it is for you, and yet… you can see the attraction.  Maybe it’s the fact that they come in neat little fingers, maybe it’s the soothing pale palette, maybe the yielding texture when you bite into them.  Who knows.  Maybe it’s my unfulfilled childhood cravings clouding my judgement.  In any event, if I were to buy any of these again (and this is a big if!!), it would probably be Twinkies.

And to finish, I will leave you with two esoteric pieces of information.  Firstly, do you know there is a host of recipes for desserts using Hostess baked products – up to and including Twinkie sushi?  Secondly, rumour has it that Twinkies contain so many preservatives and so few natural ingredients that they will survive a nuclear war…

So if you survive the blast, be sure to look out for giant cockroaches snacking on pristine Twinkies 😉