I have a confession to make:  I’m an East-ender.  Not born within the sound of the Bow bells, as such – more like an adoptive East-ender.  I have lived east of Tower Bridge since arriving in the UK 6 years ago, my last two jobs were in postcodes beginning with E and, in fact, the only stint I had living or working in the west was 6 months back in 2000 working in Hammersmith.  So it is safe to say that I am not one of the Pet Shop Boys’ West End Girls!  Despite droves of my countrymen following the Village People and going West, I have remained resolutely and happily in the east.  However, every now and then I have a compelling reason to venture over to The Other Side, and last Saturday was one of those days.

The one attraction the Christmas market and ice skating rink outside the wonderful Natural History Museum.  Verdict:  if you’ve never been to Germany, this will fill you with warm Christmas cheer and empty your wallet as you buy trinkets for family and friends.  However, if you have been to a proper German Christmas market, this will leave you cold.  Maybe it’s the icky hard plastic flooring that they’ve put down; maybe it’s the lack of food stalls and their attendant food smells – I just don’t know.  The setting is beautiful though – maybe best to go and grab a cup of mulled wine and watch the skaters against the backdrop of the building.

But the other reason for heading out west was far more compelling:  a visit to the newly-opened Tom’s Kitchen.  This is the latest venture from mercurial wunderkind Tom Aikens and is as far removed from the elaborate Michelin-starriness of his original eponymous restaurant as can be.  The room is high-ceilinged and light, with white tiled walls and some large black and white foodie prints – it reminded me rather a lot of St John. The furnishings are simple but solid wooden tables and chairs and there is a long marble bar running down the one side of the room.  Intriguingly, there is a glass panel in the floor by the door which affords a view on a subterranean room (which I later learned is the cheese- and wine-tasting room).  The atmosphere as you enter the room is immediately warm and friendly, and not at all as snooty as the Chelsea address might suggest.  I was liking this place already. When I arrived for brunch, Johanna was already seated and had amused herself with some espresso while waiting (which she pronounced excellent).  The menu was one of those rare examples of a menu where you could quite happily munch your way through four or five items, capacity permitting!  But seeing as my capacity certainly did not permit, I narrowed it down and eventually settled on the celeriac remoulade with sourdough toast triangles and excellent cured ham, while Johanna had a bagel with scrambled eggs and smoked salmon.  My remoulade was delicious – not too sloppy, not too dry and with the flavour of the celeriac (which I love) coming through clearly.  The ham made a perfect and decadent partner, its silky texture and smoky taste contrasting beautifully with the clean, crispy flavour celeriac.  I also had a taste of Johanna’s bagel and I must say that it was heavenly – piled generously high with perfect wobbly scrambled eggs studded with nuggets of smoked salmon.  Comfort food at its best!

But of course, man cannot live by savouries alone, and by the end of the meal we felt we deserved something sweet to finish with.  I quickly chose hot chocolate with a chocolate and sour cream muffin (see the theme here?!) while Johanna opted for French toast with maple syrup and rhubarb compote.  My muffin saw small but perfectly formed – quite dense and not too sweet.  But if I have a bigger appetite next time I go I will definitely order Johanna’s French toast & rhubarb compote.  The toast was correctly made from a thick slab of brioche and liberally doused with maple syrup.  This decadent, squishy sweetness paired perfectly with the tart and gorgeously girly pink rhubarb compote – a match made in heaven. 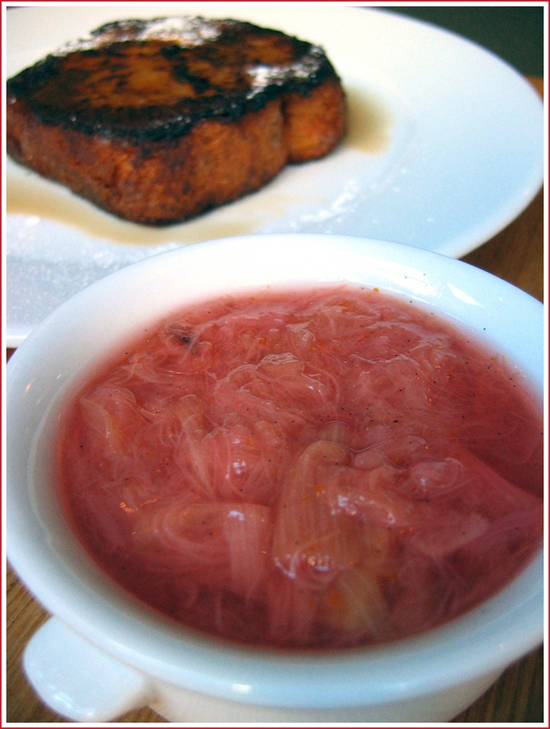 But for us, the the nicest part was the atmosphere – really friendly and relaxed and unpretentious.  We got into a conversation with two tables next to us after they giggled at our elaborate photography of a single muffin.  It also gave us a chance to check out some of the other dishes people were having.  I particularly fancied the toasted brioche with Nutella, and the chap next to us was having wonderful-looking churros.  There is also a selection of more proper lunch dishes on the menu which I’d like to go back and try.

All in all, this is the kind of local place that would coax me out of bed to come and read the papers over a mug of hot chocolate, rather than mooching around the house till all hours.  In fact, I’d say it’s almost a reason to move to the west.  Almost.