The London food bloggers go incognito for the tasting.  Can you guess who’s who? 😉

Well, we’ve tried (amongst others) canapes, chocolate, Spanish food & wine, and Mexican food.  So why on earth not salt and butter?  Yup, the London food bloggers were, 3 Saturdays ago, once more to be found crowded around a table, eating, drinking, laughing and talking obsessively about food.  We gathered at Johanna’s house to sample a selection of salted and unsalted butters, and a selection of salt from the very cheap to the very expensive.  Fat and salt – my idea of a perfect day out!

My day started considerably earlier than the actual tasting when I made my way to Kings Cross station to meet up with… the uber-fabulous Moira!  Now Moira and I have been e-mailing and phoning for the better part of two years – we’ve laughed, cried and ranted on the phone, we’ve exchanged parcels, we’ve swapped volumes of e-mail.  But somehow we’ve never managed to meet up, despite the fact that she lives an easy train ride from London.  And bizarrely, it seems that the catalyst that finally got us together is the fact that she’s heading back to the USA next year 🙁 But better late than never, I always say.  Poor Moira certainly got to see the glamorous side of London – not!  First Kings Cross, and then my office (where I’d cunningly left the tasting sheets), but she took it in good spirit.  And one black cab ride and a train trip later, we were knocking on Johanna‘s front door. 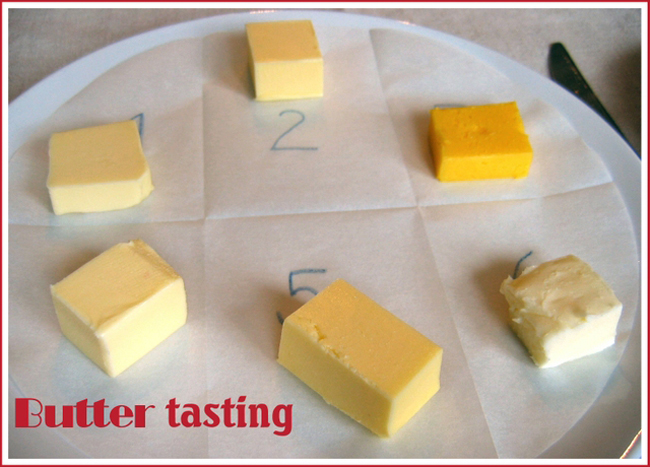 Now when you taste wine, there is a nice, established framework within which you taste – colour (out of 3), nose (out of 7) and palate (out of 10), giving you a fairly reliable mark out of 20.  But we were sort of at a loss for what the proper criteria were with butter.  In the end we plumped for colour, smell, texture and taste.  So far so good.  But the next problem we encountered was how in hell to describe the stuff?  Wine can smell like tobacco or ripe fruit or tart red berries, or apples or wood or vanilla… but butter smells, erm, buttery, or maybe creamy! I am hoping that one day a professional butter taster (for surely they must exist?) reads this and lets me in on the game.  But until then you will have to make do with my remarkably limited butter lexicon below!  And fyi, all butters were tasted blind – all we had was the block of butter on a plate and a number to associate it with.  We tasted the butters “neat” and also on slices of Poilane bread, but my notes refer only to the neat tasting.

1. Lescure beurre doux (France – Charentes) Very pale yellow – the second palest of all the butters.  Very faint buttery or creamy smell.  Very smooth and light texture, melts quickly on the tongue.  Tastes like Philadelphia cream cheese.  Rated 5/10 by me and  3.8/10 by the group on average.

2. Country Life unsalted (UK) Pale yellow colour with a slightly more pronounced smell than the previous butter.  Smooth and melts easily in the mouth, but the block of butter on the plate stayed the firmest for the longest at room temperature.  Very sweet taste – almost like eating clotted cream.  Rated 7/10 by me (I loved the sweet cream taste) but only 2.8/10 by the group on average.

3.  [Was salted – so I have discussed it under the salted butters heading]

5.  Teebutter  (Austria – Salzburg)  This was the second darkest butter on the plate with more of a buttercup hue to it.  It had a very faint buttery aroma and melted smoothly and very quickly on the tongue.  This was another one with a definite clotted cream taste – in fact it reminded me of number 2 – but at least this butter had the decency to go a bit squishy after an hour at room temperature, unlike no. 2!  Rated 7/10 by me and 4.8 by the group on average .

6.  Beppino Occeli (Italy – Piemonte) This was by far the palest butter on the plate – it was almost pure white! And this one had a distinct sour cream aroma – most people were already put off by that!  Although it was smooth on the tongue, the taste definitely had a sour cream tang to it – and we did verify that it was not past its sell-by date or anything.  Also, as it was a brand new unopened pat of butter, it couldn’t have absorbed funny smells form the firdge – that’s just the way it smelt and tasted.  Definitely everyone’s least favourite.  Rated 2/10 by me and 1.6/10 by the group on average.

3.  Artisanal clotted cream farm butter from Neal’s Yard (UK – Priors) This had the best colour of all the butters – a real buttercup yellow.  It looked almost “crumbly” in texture, but this was probably due to it sticking to the knife while being cut.  Almost no smell that I could detect.  It melted very fast and didn’t keep its shape for long. It was VERY salty – almost no taste apart from salt, but no textural evidence of salt. Almost no aftertaste. Rated 5/10 by me and 4.6/10 by the group on average.

7.  Waitrose own-brand Guernsey butter (UK) Very yellow, looks like a cheddar. Melts really fast. Almost no smell. Very salty, but the salt is not texturally obvious. Leaves a salty aftertaste. Rated 6/10 by me and 4.2/10 by the group on average.

8.  Bridel Beurre demi-sel with fleur de sel de Guerande (France – Brittany) Pale yellow. Very faintly creamy smell. Smooth consistency, but you can taste the grains of salt – deliciously crunchy. Absolutely fabulous taste. Saltiness and creaminess perfectly in balance with a very long and creamy aftertaste. The best by far. Rated 10/10 by me and 8.2/10 by the group on average (although some people wanted to give it more than 10/10!)

9.  Moorhayes Farmhouse salted (UK – Somerset) Pale yellow. Very faintly creamy smell. Texture very firm – almost like feta cheese. Not quite as delicious as Bridel, somehow less easy to melt in the mouth, but still a good balance of creaminess and saltiness with a creamy aftertaste. Rated 9/10 by me and 6.7/10 by the group on average.

So there you have it – my attempt at distiguishing 9 butters in some sort of methodical way.  Some observations that deserve to be highlighted include the following:

b)  Eating butter on bread makes it far harder to tell whether or not it is salted.  Butter no. 3 could have passed for unsalted if you only tasted it on bread, but once you tasted it alone it became obvious that it was salted.

d) The butters definitely melted at different rates, with some retaining their shape for an alarmingly long time and others becoming squishy very soon.  Maybe somebody with more knowledge than me of chemistry can explain what determines the different rates of melting, given a constant ambient temperature??

What was surprising was how different butters taste when you sample them side by side.  I was also amazed at how clear the overall loser (Beppino Occelli) and winner (Bridel) were.  The Beppino Occelli was particularly disappointing in that it came first in a worldwide butter tasting for The Wine Spectator in 2000 and first in a tasting of European butters for The Guardian in 2002 – but last in our book!!  All we can think is that the seasonal variation in the butter is great enough to explain this – the website says that the butter changes in colour (and presumably flavour?) as the cows’ diet changes with the seasons.  The Bridel, on the other hand, was universally loved.  It was salty, creamy amd melty in all the right proportions.  And it was the only butter that prompted me to fininsh the whole cube.  Mmmmm.  And I think we were all peasantly surprised that the Bridel butter cost less than £2!  Talk about affordable luxury…

All told, I think it was a very instructive exercise and something everybody should try, even if it’s just with one mass-produced and one more artisanal butter, to see that you really can taste the difference.

Up next was the salt tasting – which I will tell you all about shortly in Part II of this post.

And for those of you who are aching to know who the incognito bloggers were, here they are again, more easily identifiable 😉

From left to right we have Johanna (The Passionate Cook), Xochitl (Xochitl Cooks), Andrew (SpittoonExtra), me (Cooksister! ), Bill (Bill Please) and Moira (Who Wants Seconds?) – who swears she is going to start blogging again when she returns to the USA!  Woo hoo!

**STOP PRESS**  Spookily, on the same day as we were holding our butter tasting, The Times published the results of their tasting of unsalted butters.  Thanks Herschellian for directing me to this article!