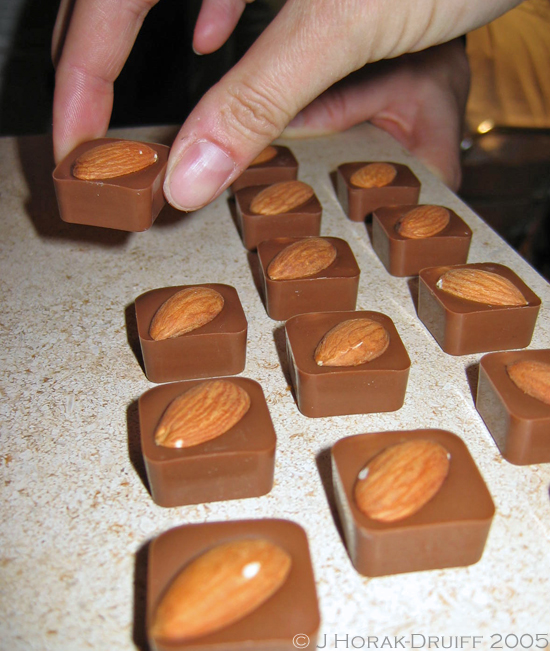 After the resoundingly successful UK food blogger get-together at the Henley Regatta in July, we immediately resolved to set a date for the next gathering.  It was Johanna who came up with the great idea that we should go to a chocolate tasting, and so the date was set for an evening in September.  The venue was to be the Pierre Marcolini chocolate shop in Kensington.  Now I must confess that I had never heard of Mr Marcolini, but a quick Google search turned up the fact that he is a Belgian chocolatier based in Brussels and also has boutiques in various other cities, such as London.  Having never been to a chocolate tasting before, I was raring to go, especially when the goods on offer look so good!

So on the appointed evening, a little band of food bloggers met up at the Kensington shop:  me, Johanna (The Passionate Cook), Andrew (Spittoon), Christina (The Thorngrove Table), Cecile (English Patis) and our European visitor all the way from Austria, Angelika (The Flying Apple).  The evening was presented by Mr Marcolini’s charming and very enthusiastic business partner (her name now escapes me and I didn’t have a pen & paper with me to write it down!  Some blogger I am…!).  I won’t bore you with the details, but she did dispense some rather good nuggets of information.

For example, a chocolatier is a title to be used only by someone who makes their own couverture (couverture being extremely glossy professional quality coating chocolate used to coat things like ganache, nuts or buscuits and containing at least 32% cocoa butter – the term basically refers to the mass volumes of chocolate before it gets shaped into consumer products).  Whereas many chocolate shops make their own “hand-made” chocolates (such as Thorntons), they buy in the couverture from big producers.  This means that they do not have control over the taste of the chocolate itself – this is a function of the type of cocoa bean used, the area where the bean was grown, how the bean was roasted and other such variables.  But a chocolatier like Pierre Marcolini can travel to where the beans are produced, build a relationship with the growers, select particular types of beans, control the roasting process and generally exert a lot more control over the taste and flavour of the finished product.  Now you know!

We also learned that the cocoa bean consists of 2 components: cocoa powder and cocoa butter.  Both are added to the couverture, but the proportions will have a huge impact on the taste and mouthfeel of the finished product.  For example, if chocolate leaves a greasy feel in your mouth, it has probably been made with too mcuh cocoa butter for your liking.  This is fine initially as the mouthfeel is good, but leaves you with a nasty, greasy aftertaste – one of the marks of cheap chocolate!!  Our hostess also explained to us that a higher percentage of cocoa (the yardstick by which people are increasingly measuring the quality of chocolate) is not necessarily the best indicator of an excellent chocolate.  An 85% cocoa chocolate can be jaw-shatteringly bitter as compared to a 70% cocoa chocolate and therefore not to your liking at all.  But conversely, this is not necessarily the case as the amount of sugar added can be adjusted proportionately, making 70% and an 85% cocoa chocolates almost identical.  We were, however, warned in the strongest possible terms about “chocolates” on the supermarket shelves that do not have cocoa as their main ingredient! 😉 Sugar (or milk solids or whatever) should never be principal ingredient (and in fact dark chocolate should not contain any dairy – just cocoa, sugar and vanilla).  So although you may like that mid-afternoon KitKat, just remember:  to a chocolatier, that’s not a real chocolate!!

Another myth that was dispelled was the idea that “Belgian chocolate” was the best.  Erm, helloooo, no cocoa beans grow in Belgium!  So in fact, Belgian (or Swiss, for that matter) chocolate is a misnomer as the chocolate originates from cocoa beans whcih originated from somewhere near the equator  – not Belgium!  It is meaningless to say that your favourite chocolate is Belgian, as that says nothing about the type and flavour of beans that you like.  In fact, it’s rather like saying “I like Sainsbury’s wine” as opposed to “I like French Voignier”.  What you can is that you like Belgian-style chocolate.  Apparently the French style is predominantly to fill their chocolates with ganache (which both sweetens the tast of the chocolate and dulls the flavour profile of the specific beans concerned); the Belgian style is to add things to the chocolate to break the sweetness (candied peel, nuts or biscuits); and the Swiss style is to make extremely creamy chocolates – lots of cocoa butter, lots of milk.

I think the main message that I took away from the evening was that, as with many other food products, if you want to sample the best and become really knowledgeable about chocolate, the watchword is provenance & traceability of the cocoa beans.  If you buy from a chocolatier with a small production, you will be able to sample a chocolate made solely from a blend of Venezuelan beans.  Or Mexican beans.  Or Ecuadorian beans.  And indeed, we sampled such chocolates at PIerre Marcolini and you can in fact taste the difference between countries in terms of flavour, frutiness, tannins etc etc.  And if your chocolatier is feeling particularly adventurous, you can even get chocolate made from beans grown on only one estate.  And of course you will want to look for chocolate made from Fair Trade cocoa beans.

So what did we taste?  Well, as mentioned, I didn’t take notes at the time but did rush home and make some sketchy notes that night so here, to the best of my recollection, are my views.  If any of the other bloggers who attended have better memories or notes than me, please feel free to correct me if I am materially incorrect on any point ;-):

1. 85% cocoa with ganache filling (Venezuela) – this was fantastic.  Very dark, very rich and with a round, nutty flavour.  Aparently Venezuelan beans are known for their smooth taste and this was no exception.  The ganache filling was delicious and decadent, but I think the softer contrasting texture detracted from the intensity of the flavour.

2.  72% cocoa solid chocolate (Venezuela) – visually indistinguishable from the first chocolate, this was in my opinion a better chocolate for a serious tasting (or a serious chocolate eater!!).  It tasted less sweet and (unbelievably) more intensely chocolate than the previous one, despite having less cocoa.  I would say that the solid chocolate as opposed to the ganache is less distracting when you are doing a formal tasting and focussed my attention on the hazelnutty flavours.

3.  72% cocoa with ganache filling (Ecuador) – even though this was a ganache-filled chocolate, not solid, you could immediately taste the difference between this and the Venezuelan chocolate.  Whereas the difference between the first two was merely a question of intensity of flavour, this was a subtly (but deliciously!) different flavour.  Instead of the round, nuttiness of the Venezualen beans, there was an interesting spicy, tannic flavour here.  It tasted as though there were more cocoa in it – like how you might expect an 85% cocoa chocolate to taste – but in fact it was just the taste of the different beans.  This was my favourite of the night as I though the tannins provided a great counterpoint to the sweetness and gave the chocolate a lovely clean finish.

4.  72% solid chocolate with candied citrus peel (Java) – we were told that the Javanese cocoa beans have a distictive fruity flavour and everyone agreed enthusiastically once they tasted this.  But, erm, of course it was fruity – it was full of candied citrus peel!! I enjoyed this one (chocolate and citrus – what’s not to like??), but I though it was an odd choice for a tasting where you were meant to be showcasing the taste of the chocolate.  The peel just overwhelms any more subtle flavours.

5.  35% (?) solid milk chocolate – (sorry – not sure of the cocoa percentage here.  I’m guessing.) I found this too sweet for my taste, especially after the lovely dark chocolates we’d just had.  Not bad – just less intensely cocoa-ish and sweeter.  Perfect if you like milk chocolate.

7.  Coeur framboises – this is Pierre Marcolini’s signature heart-shaped white chocolate filled with dark chocolate raspberry-flavoured ganache and coated with a raspberry glaze.  Sold yet?  Not only do they look adorable, but because the white chocolate is merely a coating for the dark ganache, the whole ensemble is never too sweet plus of course the raspberry glaze aso forms a nice, tart counterpoint to the sweet white chocolate.  Perfect for gifts! 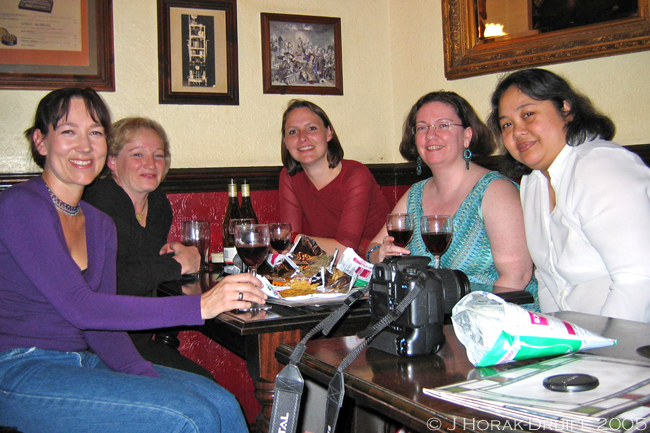 And so our evening drew to a close and we ventured out into the London night and straight into the nearest pub for a restorative bottle of red wine and a gourmet snack of some potato crisps, served as is traditional in their own ripped-open packets (see pic above, so the kitchen was closed – what were we supposed to do?!?

From left to right we have me, Angelika, Johanna, Christina and Cecile.  And, of course, the traditional lens cap and crisp packet in the foreground for added authenticity.  Keeping it real… 😉