What can I say – I’m a sucker for a new restaurant.  Especially one which has so far generated only good reviews. And then of course there’s the fact that it’s Swedish.  Like Abba.  And we all know how I feel about Abba… 😉  So recently when two friends and I were planning a celebratory dinner out, I voted for Glas.  This is the new restaurant started by Swedish cook, caterer and broadcaster Anna Mossesson who has traded as Scandelicious at Borough Market since 1999.

Let me start with one of my two Glas caveats.  DO NOT attempt to find it using Multimap or Streetmap.  No, really, I mean it.  We had met for a drink at the Mug House under London Bridge and had a printed map.  Right area, three intelligent people and a map.  What can go wrong???  Well, we walked the length of Park Street until it was Park Street no longer.  No sign of Glas. Called the restaurant and they reiterated that they were in fact in Park Street.  Okeydokey. Eventually we took a walk around the outskirts of Borough Market in the hope that we’d stumble upon it – and in the end that did the trick.  And of course, the street sign said “Park Street”.  Some other, different offshoot of Park Street that we had been on. How it relates to the map, I’m still trying to figure out, but anyone less determined to go to Glas might have given up and gone to McDonalds!! Brindisa is just on the corner and that’s easy enough to find… For intrepid people intending to follow in our footsteps, it’s across the road from the Neal’s Yard shop at Borough Market.  Throw away your Multimaps!!

So after our epic journey we found it and were instantly soothed by the soft pastel decor and encouraged by the fact that after half an hour they had not given away our table!  It’s not a very large room and despite the wooden floors and lack of soft furnishings, not a very noisy one either.    So we settled in and got right down to business with the menu.  Glas has a grazing menu only, so no dish is very big – ideal for sharing, which is exactly what we proceeded to do.  (The menu also helpfully tells you that 3-4 dishes per person is sufficient.)  Neither of my dining companions is a fan of herring and I think they were somewhat concerned that the menu would be a long homage to herring.  And indeed, the first four dishes on the menu were a herring lover’s dream (vodka & lime herring; herb & garlic herring; Glasmastar herring; and a combination platter of all the above).  I would have ordered one or two of these, but I deferred to my companions’ tastes and my evey moved on down the menu.  After much debate, we decided to order four cold and four hot dishes to share between the three of us – for future reference, that was more than enough! 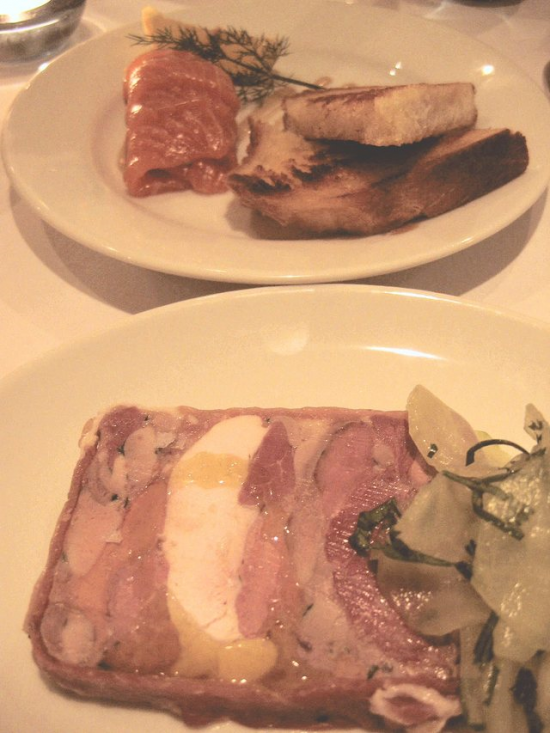 On the cold front we had two orders of gravad lax with mustard sauce and what the menu called toast. Toast?  Hah!  This was no ordinary toast – this was triangles of fried bread!!  I was in heaven. The gravad lax was perfectly smoky with a texture that I would have described as unctuous, if only I didn’t think it was such a poncy and overused word 😉 The sweet smokiness of the fish was perfectly offset by a zesty smear of mustard on those heavenly little triangles of crispy, fatty bread.  Delicous.  Along with that we ordered the pork, chicken liver and guinea fowl terrine.  This was a proper terrine with clearly identifiable layers.  It was pleasant but I didn’t find the flavours distinct enough to make for a truly memorable dish.  Tasty though, and served with a little pile of cool pickled cucumber.  The last item in our cold selection was one that we should have ordered more of – the cheddar cheese flan with red onion marmalade. OK, I admit, I am a sucker for cheese with any sort of preserve so I’m probably a bit biased, but both my dinner companions agreed that this was totally heavenly.  The pastry crust was delicious – utterly buttery and crumbly  – and I would guess that the filling contained an absolutely minimal amount of egg and the rest was pure, melty, tangy cheddar.  Oh my. Together with the sweet onion marmalade, it made for a meltingly delicious dish.  I could have eaten a lot more. 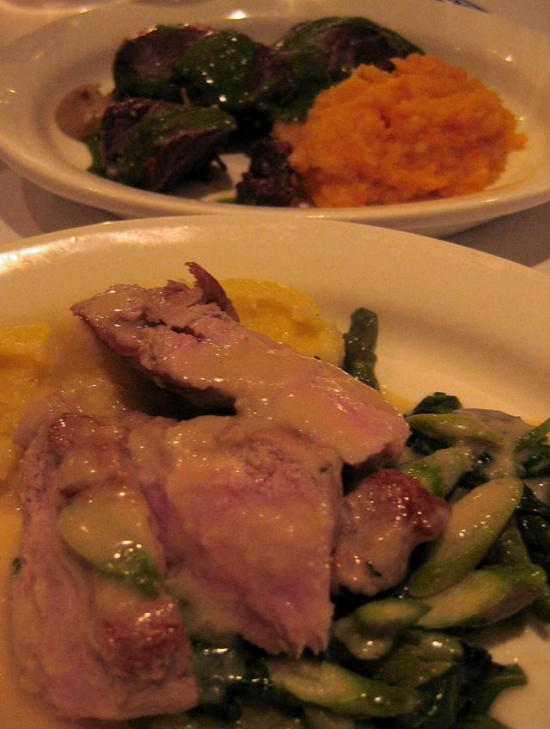 OK, so on to the warm dishes.  Sadly, the reindeer that was alluded to on the website was not on the menu.  Maybe it wasn’t reindeer season, who knows.  So we went for variety and tried 4 completely different dishes.  First up was a fish casserole with halibut, salmon, tomato and fennel.  This was tasty but didn’t blow me away.  In fact, I didn’t even make many notes about it so it clearly didn’t make a huge impression.  But it was perfectly pleasant.  Next up was the slow-roast pig cheek with swede and mustard.  The meat was incredibly tender and fell apart at the touch of a fork, but at the same time it had a lovely smoky depth of flavour that matched very nicely with the vague sweetness of the swedes.  Yummy.  Something I don’t eat often is veal, so when I do eat it I try to make it a memorable dish.  The next one was one of those dishes.  The menu description was pretty straightforward.  Veal, mash, asparagus, truffle vinaigrette.  But the whole was a lot more than the sum of its parts.  The veal was served in thin, tender pink slices.  [From the pink colour, I like to think that this was rose veal – the more ethical face of veal, derived from calves that are allowed a natural diet as opposed to being fed a liquid diet their whole, short lives.  But I confess that I didn’t ask about the provenance of the veal. :-(]  On the plate, the dish took on a whole different light.  It was like comfort food if the best chefs in the world came up with comfort food.  The veal was incredibly tender, the mash had some delicious flavour (garlic??), the sliced asparagus were cooked to perfection, and the truffle vinaigrette just tied it all together for me.  There were no rough edges, no strident flavours, no bright colours. It was grown-up comfort food at its best – highly recommended.  And then there was my favourite of the warm dishes – the guineau fowl with morel mousse and port wine sauce. Wow.  As I recall, the guinea fowl was stuffed with the morel mousse and there was also a creamy sauce of some sort which combined perfectly with the rich port sauce.  I was transported, I was in heaven, I was oohing and aahing.  It was definitely the high point of the meal for me.  If I felt I had any space left, I would have ordered another of these.  Seriously.

To wash all of this down (seeing as there were no Scandanavian wines on the list…!) we had a bottle of Altos “Las Hormigas” Malbec 2002 from the Lujan de Cuyo region of Mendoza – a SERIOUSLY delicious wine.  It was everything a New World Malbec should be – big, fruity, well-rounded with soft tannins – in a word, marvellous.  It knocked my socks off and was a bargain at under £20.  In fact, it probably had a minor role to play in the fact that I nearly twisted my ankle and narrowly avoided cracking my skull open. You guessed it – here’s my second Glas caveat:  be Very Very Alert when you visit the bathroom!!  Yes, it’s true that they do have a sign on the door saying mind the step, but you’ve seen signs like this a hundred times and they usually means there’s slightly uneven ground ahead.  Not this time.  What you find here is that you open the door and you might perhaps still be talking to your friend behind you and not staring intently at the ground ahead.  You take one step inside and then… the ground disappears and you’re left flailing wildly, trying not to hit any of the rapidly-approaching walls or the floor.  Yes – that would be the step they’re talking about right there.  A fully-fledged step about a foot inside the bathroom door and invisible if you are not concentrating.  And it’s a step down, so it’s not as if you just stumble upstairs, you literally take a tumble!  In the end I sacrificed my ankle and saved my skull and luckily no permanent harm was done.  But when they tell you to watch your step, listen to them!! 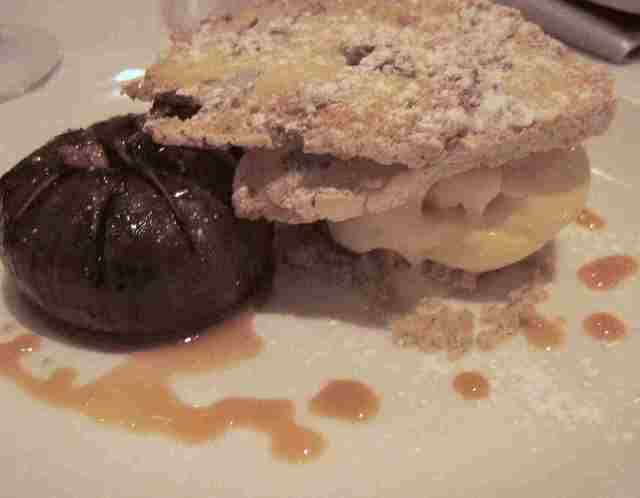 And then, despite the fact that I had tried to fling myself into the masonry, and despite the fact that I was quite literally stuffed, the dessert menu appeared and all resistance crumbled.  I’m a sucker for figs and there it was on the menu – roast fig, “Flagg punch ice cream” (??!) & walnut toast.  How can you say no?  Sadly I didn’t ask what Flagg punch ice cream might be, but it’s taste was kind of like rum ‘n raisin without the raisins, if that makes sense.  The fig was roasted whole and drizzled with some of its own syrup and the walnut toast was like very thin walnut biscotti sandwiching the ice cream – perfect for scooping up a morsel of fig, a dollop of ice cream and transporting to your mouth!  The dessert managed to be texturally interesting, not too sweet and surprisingly light, but still looked decadent.  A big winner on all fronts!

Sadly, I can’t remember the price per head now, but I thought it was very reasonable for the calibre of food we had.  Maybe not a place to take big, strapping, steak-and-beer fans but a fantastic place for a quiet dinner a deux or (as we did) a few friends who want to try a bit of everything on the menu.