You are here: Home / Recipes / Baking (sweet) / Cherry clafoutis for a summer dinner in our garden 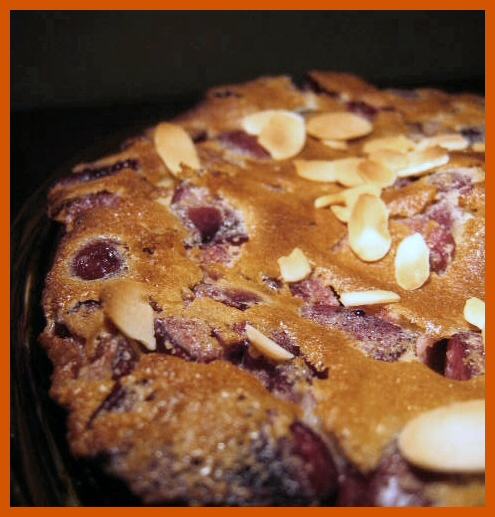 As I mentioned in passing in a previous post, just before the weather turned rainy here in London, we had a weekend of three consecutive braais – one on Friday, one on Saturday and one on Sunday.  Each braai was significantly different – in terms of guests, venue and food, so I thought it would be a good idea to do a post on each and include a recipe from each.  Putting two and two together from the post title and the picture below, you might have guessed that the first braai was a lovely summer evening affair in my garden. 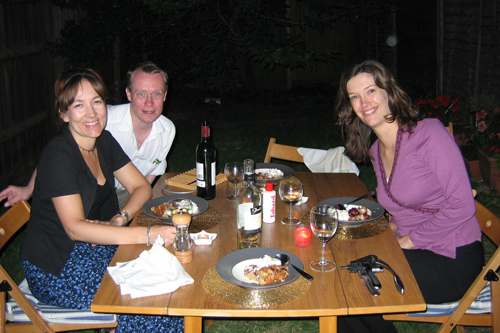 Let me just take a moment to say that I am irrationally fond of my garden.  By South African standards it’s a tiny little rectangle of grass wedged between other rectangles of grass, but at the bottom there is an ornamental cherry tree which provides blossoms in spring, shade in summer and colour in autumn.  There are pots of fragrant alyssum, my variegated lavender and my patio rose, not to mention my spectacular dahlia (I believe the variety is called Art Deco).  And on still summer evenings I can think of very few more pleasant places in London.

So it came to pass that on Friday after work my friends Antony and Olwen joined Nick and I for a braai in my beloved garden.  The warm, still weather encouraged us to carry the table outside and dine under the stars, and the picture was taken just as the light faded.  Little sparkly candles, my beloved gold beaded placemats, good friends, good food, good wine – what more could you want?  Nick outdid himself on the braai front and reprised a dish he first made last summer – pork fillet stuffed with pear and sage, served alongside caprese salad and a sinfully creamy, cheesy potato bake.  But the star of the show (particularly if you ask Antony!!) was the dessert.  Seeing as there is an abundance of gorgeous summer fruit available right now, I wanted to do something fairly light and fruity, so what better option than a cherry clafoutis?

According to the Joy of Baking, a clafoutis (also sometime spelled clafouti is a French country dessert which originated in the Limousin region in Southwest France.  The word comes from the French word clafir which means ‘to fill’  and it is traditionally made with the first sweet cherries of the season which are left unpitted as the kernels are said to add extra flavor while baking.  The batter is rather like a pancake batter (heavy on the sugar and eggs, light on the flour) and results in a baked custard rather than a cakey confection. I knew none of this when I first made a clafoutis about five years ago.  Hell, I didn’t even know how to pronounce the word!!  I think it was the picture that caught my eye first, rather than the recipe – all puffed up and golden and strewn with slivered almonds.  The recipe in question was in fact for a quince clafoutis, but I have always made it with apricots (both fresh and tinned), and I still use the same recipe clipped from some long-forgotten magazine and stuck into my recipe book.  I decided on cherries before I discovered that cherries are the traditional option – I just thought they’d look pretty and add the requisite tartness to the pudding.  Clearly I am a clafoutis natural 😉

As you will see from the picture, the finished product turned out beautifully.  I’m afraid I wasn’t a traditionalist so the cherries were stoned before baking (it’s kinder that way, kind of like freezing your lobster before boiling it… :P). The clafoutis puffed up beautifully – rather like a flattish soufflé – and the play between the slightly tart, boozy cherries, the sweet yielding batter and the crispy almonds was heaven.  Do yourself a favour and make this while cherries are still plentiful!  You’ll regret it if you don’t…