You are here: Home / Memes / Foodbloggers’ Guide to the Globe: 5 things to eat before you die 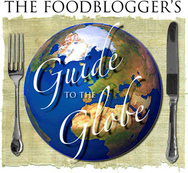 It’s been a while since I received a meme.  Not surprising, really, considering that my drafts folder is littered with half-completed memes!!  I think soon I’ll have to do a collected post on “memes I didn’t get to complete in time” or something… And it seems I am not alone – memes became so numerous that everyone got kinda memed-out and the originator of this particular… erm… exercise (Melissa from The Traveler’s Lunchbox) is adamant about not calling it a meme but rather a “joint project” 😉  So when I discovered today that Chubby Hubby in Singapore had tagged me, I though I’d better strike while the iron is hot lest this one also end up in the Limbo of Half-Written Posts!

The basic premise is as follows:  we have all seen those lists of “50 places to visit/movies to see/things to eat/books to read before you die” and in fact I’m aware of at least two relating to food.  There was one list compiled by food writers and chefs for The Guardian last year (which I blogged about here)and then there’s a list compiled as a result of a public survey conducted by the BBC Food channel in 2004.  As Melissa says, the latter is astounding in its vagueness (pasta?!?) and the prosaic nature of some of the contents (sandwiches?!?!).  On the other hand, I found the former to be excruciatingly specific and, in most cases, totally unattainable for people of modest means born outside of Western Europe and the USA.  And both Melissa and I agree that the lists are terribly Anglocentric – but then again, that’s the nature of these lists.  So Melissa has started a project to encourage food bloggers to nominate their 5 “must do” foodie experiences, however prosaic or exotic, and will be keeping a master list on her blog.

And so for the record, here are mine.  I struggled mightily to get it down to five and sadly had to edit out Berthillon’s salted caramel ice-cream; fresh tacos al pastor at a wedding in Chihuahua, Mexico; and mussels fresh off the rocks at a beach braai (BBQ) 🙁 But here are the five that made the cut:

The first time I ever had foie gras was a eureka moment for me.  Up until then, I had been a bit ambivalent about liver in general and the whole concept of force-feeding geese was not my cup of tea.  But I reckoned that I should try it once in the interests of research.  And once was all it took… The texture is what really blew me away.  I have always adored butter, and here was something with the taste of meat and the consistency of butter.  Incredible – and something everyone should try once.  My favourite plate of foie gras was at Viridiana in Madrid where two great slabs of the stuff were served with rose chutney and toasted vanilla brioche.  There are no words.

2.  Karoo lamb, eaten in the Karoo, hot off the fire

The Karoo is a semi-arid area in the interior of South Africa, stretching east from Cape Town, and some of the few things that thrive there are sheep.  The Karoo also plays host to hundreds of aromatic grasses and herbs that only grow in that area, and this is what the sheep feed on.  This results in succulent meat in which you can literally taste the terroir – more so than with any other meat I have eaten.  Most restaurants in South Africa will have some form of Karoo lamb on their menu, but it was only when Nick and I went to a friend’s farm near Colesburg that I really discovered Karoo lamb.  We went to the local butcher and got some fat lamb chops as fresh as can be, and that night we braaied them under the stars with no seasoning other than salt.  They were succulent and infused with a herby flavour that I had never tasted in meat before – and, sadly, have never tasted again.  But that night I realised what all the fuss was about.

3.  Visit one of Pierre Herme’s shops and have some macarons

I know this has already been suggested by somebody else, but this was another eureka moment for me.  A pastry shop is a pastry shop is a pastry shop, right?  Wrong.  Not when it’s Pierre Herme‘s pastry shop.  My first impression when I walked through his doors last summer in Paris was that this was more like a fancy boutique than a pastry shop.  Although one gets used to seeing elaborate creations on your plate in smart restaurants, it’s not often that you get to take home an edible work of art – and that’s exactly what you get to do here.  It was just mind-blowing that somebody was willing to make such an effort to create something which you can finish in three big bites! On that first visit I took home an Isphahan – one of the more visually delightful things I have ever seen and full of the most heavenly lychee cream – and a box of macarons.  And although the Isphahan was impressive, it is the macarons that (to my mind) show off Pierre Herme’s talent at combining flavours.  Every time I eat an olive oil and vanilla macaron, I get a kick out of finding a tiny square of olive in the centre of the vanilla buttercream.  Mind blowing.

My favourite place for eating oysters has always been the Knysna Oyster Company on Thesen’s Isle in the coastal town of Knysna, where Nick and I have devoured many a mollusc.  One of the unique features of the restaurant is that there are zero food miles involved – the oysters grow in beds in the same lagoon on whose shores the restaurant is situated – you almost watch your meal being taken out of the lagoon, shucked and put on your plate!  Oysters simply don’t get any fresher than that…  We often stopped here on the long drive from Port Elizabeth to Cape Town and wolfed down a dozen oysters, but these were almost always the cultivated oysters grown in the lagoon beds.  Last December, we decided to push the boat out a little and ordered a dozen of the wild Cape coastal oysters, just to see if you could taste the difference (these are hand-picked off the rocks in the Indian Ocean between Riversdale and Tsitsikamma).  Although they are smaller, the flavour is far more intense and I just couldn’t swallow them whole – I had to keep them in my mouth as long as possible to savour them.  They are probably not the thing to feed to non-oyster lovers to convert them (!) but if you are already an oyster lover, they are an unmissable experience.

When Nick was seconded to Spain for a few weeks this year I was thrilled – Spanish food markets!! And as luck would have it, his apartment was near the La Paz market in Madrid.  So, as you do, we wandered down there on Saturday morning to collect some supplies and came back with little green olives in brine, cava, crusty bread and two packets of the most expensive meat I had ever bought.  The slightly less expensive one was lomo Iberico (cured pork tenderloin made from acorn-fed pata negra pigs), and the other was a pack of cured ham – Jamon Iberico de belotta from Jabugo which I subesquently learned is generally acknowledged as *the* area for premium pork products in Spain.  The lomo was delicate and delicious, but it is the ham that was the show-stopper.  It was pre-sliced into the most delicate translucent slivers imagineable and the perfectly distributed marbling of fat made me understand for the first time what marbled meat is really meant to look like.  And as for the taste… it had an incredible nuttiness (I swear you could taste the acorns) and a melting silkiness on the palate that was quite simply orgasmic.  It is truly the finest thing that a pig can become and an absolute must-try for all carnivores.

That’s all folks!  And I’m passing on the baton to: