I am standing in the middle of Paddington station – yes, grubby old Paddington – and I am the most underdressed person there.  Who would have thought. All around me are women in lovely frocks (I even stopped one on the escalator to ask where she got her frock from – to Nick’s mortification!), matching hats and pastel high-heeled mules going clickety-click as they walk.  Clustered under the Departures board is a dapper collection of young men in a variety of stripey blazers that would make Paul Smith blush.  Oh, and a couple of straw boaters thrown in for good measure.  And yet, when these people dressed so differently to me set off for their train, I follow them as I KNOW we are all heading for the same place.

Yes folks, it’s time once again for the Henley Royal Regatta!  Rowing since 1839.  Royal Patronage since 1851.  And a foodblogger picnic since 2005.  Not in order of importance, of course!!  With Henley being part of the London Season, everyone gets very dressed up, which to my mind is a very odd idea if you are going to spend the day walking up and down a dusty (and potentially muddy) towpath along a 2.1 mile bit of the Thames.  Everyone except us, that is.  From near and far the foodbloggers came, in comfortable shoes and clothes that could take a bit of lolling on the riverbank, bearing with them a movable feast.  Nick was going to be our token rowing person, to lend some rowing street-cred to our party, but with the mercury soaring he decided to opt for shorts and sandals instead of his peacock blue rowing blazer and longs. This turned out to be a Very Good Decision, given that we arrived about 10 minutes later than planned and consequently lost out on one of the very few shady patches on the river bank, meaning that from about 11a.m. onwards we had unrelenting south-facing sun.  But more of that later. So who have we here?  From left to right you can see my other half Nick, me, Andrew (Spittoon), Johanna (The Passionate Cook),  Shana (Owlfish), Xochitl (Xochitl Cooks) & Steve, Jenni (Pertelote), June (Bread, Water, Salt, Oil) and newcomer Clare (Lemon Soul) – welcome!  Taking the picture is Cecil (pictured in the 2nd pic with me) – not a blogger, but a very old and dear friend.  Christina (Thorngrove Table) was going to join us but called that morning to say she had been struck down by a nasty bug – poor thing!  Jenni and I were sitting on the train totting up all the things Christina was going to bring and that we obviously could no longer have – no Jade Princess cocktails!  No chocolate chilli creams!  Alas!  There was another tense moment when the first of us arrived (me, Nick, Andrew, Jenni & Johanna) and wanted a quick reviving glass of Pimms as a reward for making our way along about a mile and a half of towpath – and then we realised that we had no lemonade!  As June was driving, she had kindly volunteered to bring 6 litres of (heavy) lemonade – but she had not yet arrived and I didn’t have her number to  check whether she was on her way!  No lemonade = no Pimms cocktails.  Aaaaaarrrrrgh!!  But at that moment Shana arrived with 2 litres of lemonade (hurrah!) and shortly thereafter June also arrived, so if all else failed, we would have Pimms! 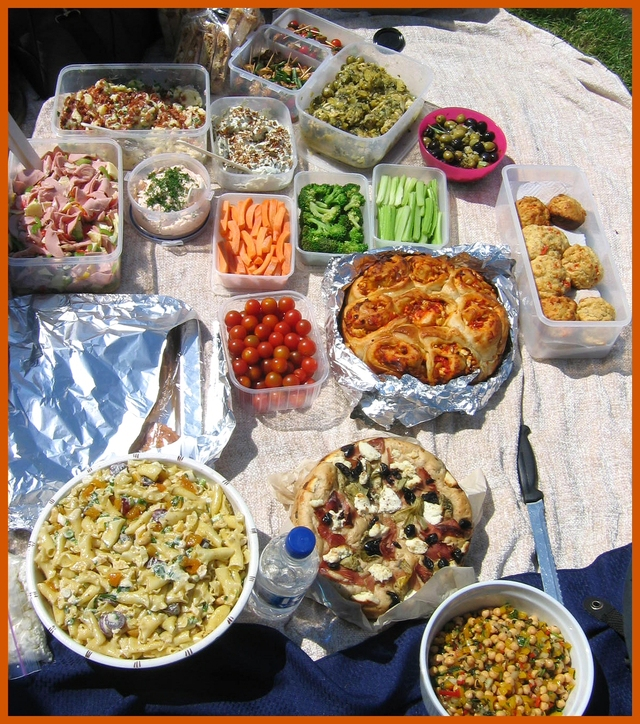 After a glass of Pimms (correctly garnished with chopped cucumber, orange, strawberry and mint) we set about the all-important task of Setting Out The Food.  Oh wow.  You wouldn’t think we could improve on last year… but I think we may have managed it! Let’s see what we had: 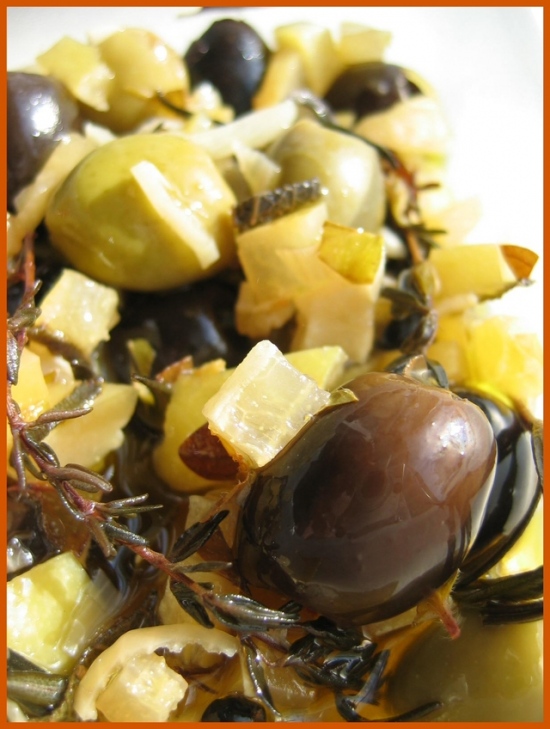 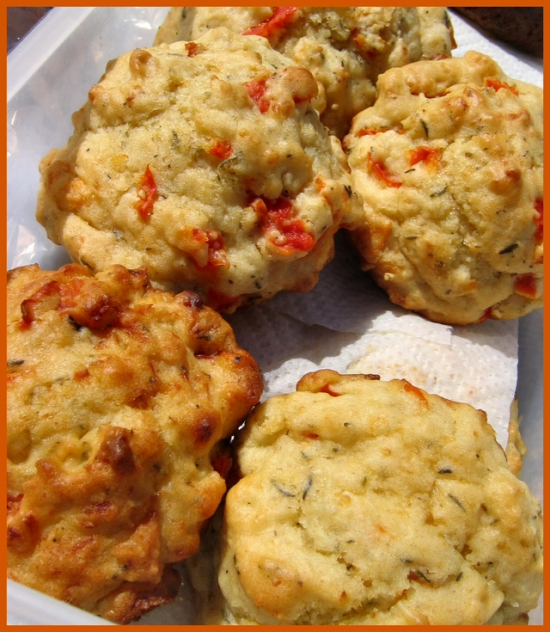 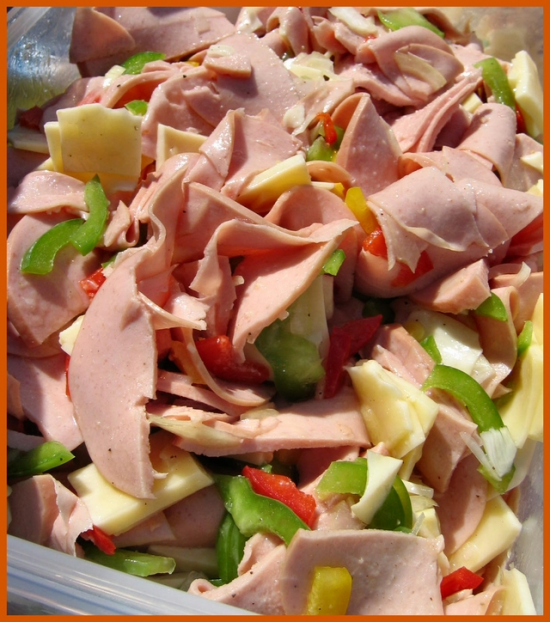 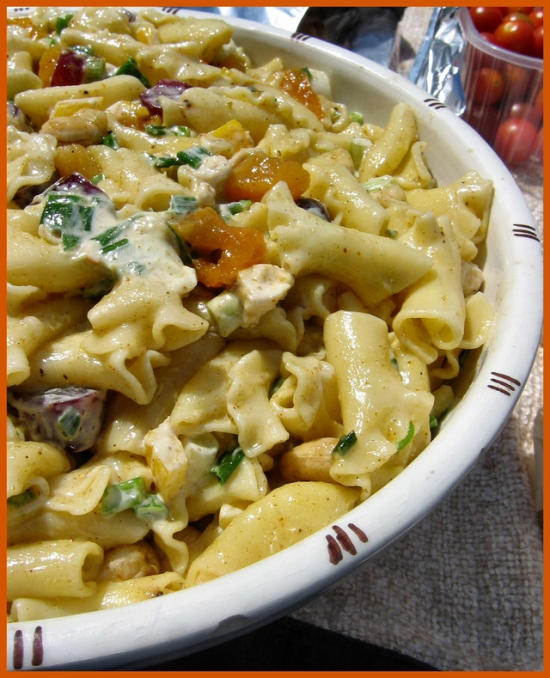 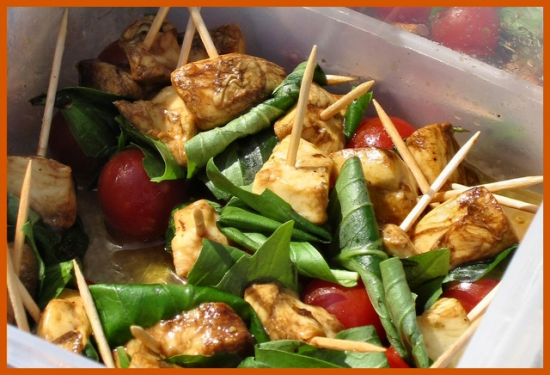 Phew!!  No wonder passers-by literally stopped and STARED.  One woman told me it was the best picnic she had seen and could she have a look around to get ideas (!!), and another guy walked past carrying a BBQ, pointed at our spread and said “now THAT’S a picnic!!”.  In case you were wondering, there is a lot of picnic envy that goes on at Henley…  And we did get a couple of puzzled stares when all the food was laid out and we all wordlessly grabbed our cameras and circled the picnic like sharks, aiming for the best shot of each dish.  Ah, for the life of a food blogger!!

And so we settled down to enjoy our picnic and watch some rowing (yes, there was indeed a reason apart from picnicking that most people were there!).  As always, Nick was worth his weight in gold for talking the novice rowing spectators through the events – why some boats have eight guys and others only four or two; why some boats have coxes and others not; or what the guys on the umpire boats are there for.  With the mercury rising steadily and a distinct lack of shade, we decided to eat sooner rather than later – and I have to say that it was all pretty fabulous.  My favourites were Johanna’s dips, my own quiche (of course!) and June’s fantastic marinated olives with preserved lemons and herbs.  But that’s not to say that everything else wasn’t delicious!

After lunch, Nick and I took a stroll down towards the Boat Tent & Leander Club – not just for an afternoon constitutional but also because I had been approached by Radio Regatta to do an interview! Radio Regatta is a venture by some Henley locals and they broadcast from 21 June until 2 July, in and up to 8 miles around Henley-on-Thames.  The charming Bob Thomas got hold of me via e-mail and said they wanted to do an interview about hoe the bloggers used the regatta as a focus for their picnic.  Since I’d never done a live radio interview (and because I love an audience!!) I agreed and that’s how I found myself sitting under the trees with Bob, sipping (yet another) Pimms and giving him some background info on food blogging.  Soon I was ushered into the temporary studio and interviewed by Polly – not so much about blogging as about why we chose this event specifically to use for our annual picnic venue and how we manage to attract bloggers from far and wide.  All too soon my 10 minutes was up and it was back to the real world on the river bank with my friends. (I have requested an MP3 version of the interview, but sadly have had no response yet.  If, however, it ever arrives, you can be sure it will be put up on this site!!) By this time (mid-afternoon) people had started drifting away but the real crunch came when Xochitl and Steve started making moves to depart:  they had brought the only sun umbrella and currently we were all taking turns so huddle under it on a rotational basis.  Luckily Johanna volunteered to get the umbrella back to them and we retained use of our sole sunshade even after they’d left.  The last foodie activity of the day was the Big Bakewell Taste-Off between my, Andrew’s and Xochitl’s versions (pictured) of Bakewell tarts, as well as sampling June’s cantucci, Jenni’s fruit cupcakes and Shana’s mini applecakes. 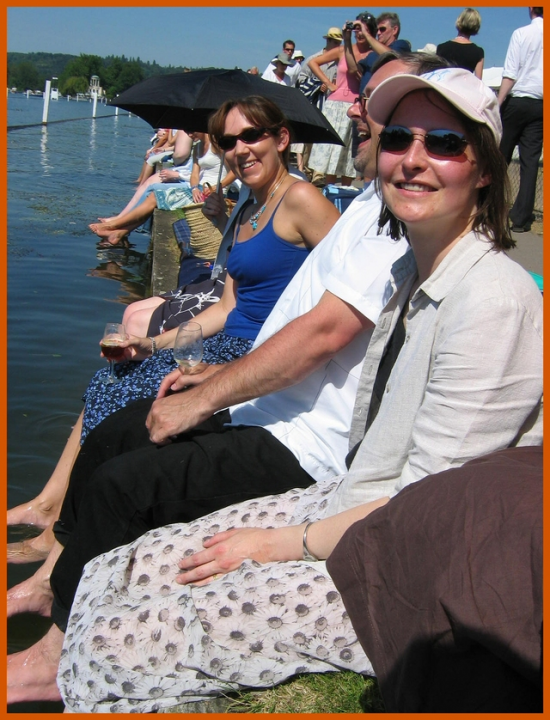 After that came my favourite part of the say:  the remaining few (me, Nick, Cecil, Andrew, Johanna  & June) reclined/sat on the bank dangling our feet in the temptingly cool Thames, drinking yet more Pimms, taking sporadic photos of the rowing and just shooting the breeze with good friends.  We were replete with good food, warm sun and great company.  It was the epitome of what a lazy English summer picnic should be.

And you can bet your bottom dollar we’ll be back for more of the same next year!