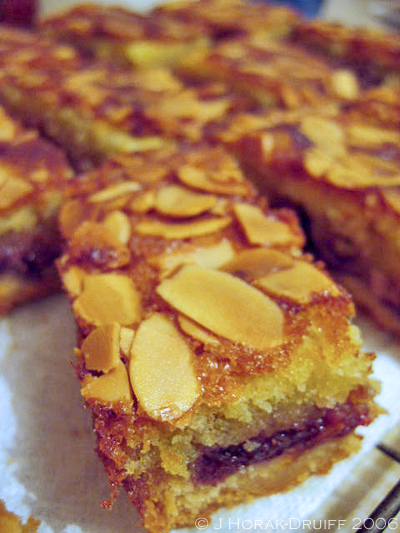 I have a confession:  I had never heard of Bakewell tarts, puddings, slices or any other variant of Bakewell confectionery until I set foot upon these shores.  Clearly the English who colonised my little bit of Africa were not from Derbyshire near the Peak District – this is where you will find the town of Bakewell where the pudding (or tart, depending on your camp) originated and it’s the town that gave the tart its name (rather than the name being purely instructive!).

Of course, the first place that I saw Bakewell tarts was on the supermarket shelves where the ubiquitous Mr Kipling makes sure that we are all well acquainted with his particular version of the Bakewell:  a pastry case with a sickly-sweet looking topping of icing sugar and a glacé cherry plonked in the middle.  Hmm, think I’ll pass on that one!  So when Andrew suggested that we all make a Bakewell tart/pudding to show support for the aparently endangered confection, my first thought was “why on earth would you want to save it??”  But some research convinced me that Mr Kipling’s version is pretty far from the original, and that the original sounded a whole lot better.

I won’t bore you with the details, but the Bakewell pudding is said to originated in Bakewell in the 1860s, allegedly as a result of a cook getting her instructions mixed up and putting the jam under the tart topping instead of over.  Or something like that.  Not to worry – the story is apparently apocryphal.  Either way, your typical Bakewell pudding consists of a pastry crust, spread with jam (raspberry is traditional) and topped with a mixture of egg, butter, sugar and ground almonds.  The name Bakewell tart is apparently a johnny-come-lately as it was always referred to as a pudding in earlier references, and it does seem that the topping was far more eggy in the pudding version.  But I don’t think you would be shunned by polite society if you used “tart” and “pudding” interchangeably these days.

So, there I was, faced with the prospect of making this unfamiliar English confection while trying simultaneously to pack for the Henley foodbloggers’ picnic and entertain my houseguests with a braai (BBQ).  What to do, what to do… But help was at hand in the shape of Nigella Lawson’s Feast, where I found a recipe for Bakewell slices – even more perfect.  These sounded more portable and therefore ideal,  considering I had to drag them clear across London the following day to get them to the picnic!

The recipe was really easy – even though I don’t have a food processor (not in this country, anyway!!).  As I’m not a huge fan of raspberry jam (or indeed any very sweet jam) I used cherry conserve and let me assure you, this is the way forward!! Delicious!  There was (as usual) some drama in that I hadn’t bought enough ground almonds and even after blitzing some of my flaked almonds with my hand blender, I still didn’t have quite what the recipe demanded, so the final taste could have been a bit more almondy.  Oh yes, and while entertaining the abovementioned houseguests I managed to forget about the time so the poor thing spent about 10 minutes longer in the oven than it should have.  But overall this wasn’t fatal and on a balance, the slices were a great success.  Deliciously crumbly shortcrust base; lovely tart cherry conserve and light frangipane with crispy toasted almonds on top.  Mmmmmm! 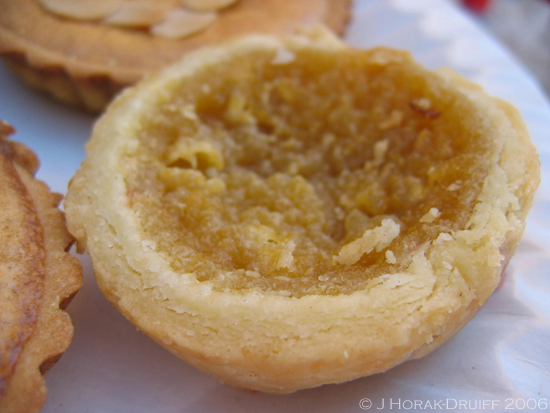 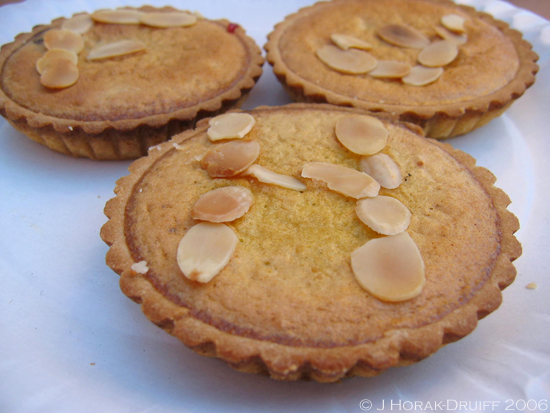 And what about the taste-off?  Well, both Andrew and Xochitl brought their Bakewells to the Henley picnic and so we had the unique opportunity to try three very different takes on the same basic idea.  Andrew used a very traditional recipe and, unusually, it contained no almonds.  His  little tartlets (on the left) had lovely crumbly pastry and an appealingly gooey topping – but consensus was that maybe they were a little short on the jam.  Xochitl certainly won on aesthetics:  Her one large tart and three tartlets were the picture of Bakewellian perfection!  The large tart had a raspberry jam filling and the tartlets had figs and honey instead of jam, but sadly I only tasted the large tart.  Xochitl scored points for lots of jam, but her crust was ready-rolled pastry which is never as light as home-made.  As for mine (see below), they obviously suffered from their extended stay in the oven (!), but won points for the crumbly shortcrust base and I have to say that I liked the contrasting tartness of my cherry preserve filling the best out of all three, but that’s purely a matter of personal taste.  A big plus, though, was that the slices were a lot easier to get to the picnic in one piece that anything in the shape of a tart!  But when all is said and done, I’d say we have all done a fab job at keeping the Bakewell alive! 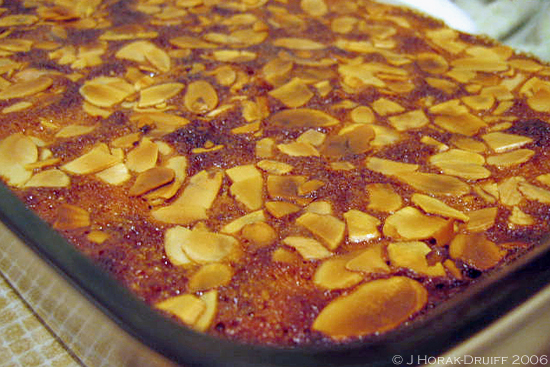 Mix the flour, icing sugar, salt and butter in a food processor (or alternatively, rub the butter into the dry ingredients) until the mixture is crumbly and beginning to form a ball.

For the topping, melt the butter and set aside.  Toast the flaked almonds in a dry frying pan – watch that they do not catch! Beat together the eggs, sugar and ground almonds.

When the baked crust has been removed from the oven and cooled for about 3 minutes, spread it evenly with jam.  Beat the melted butter into the egg, sugar and almond mix (to make frangipane) and pour this over the jam.  Top with the toasted flaked almonds and bake for 35 minutes till turning golden.

Allow to cool before cutting into 16 slices.