You are here: Home / Restaurants / London restaurants / Guess who went to the Gherkin bar? 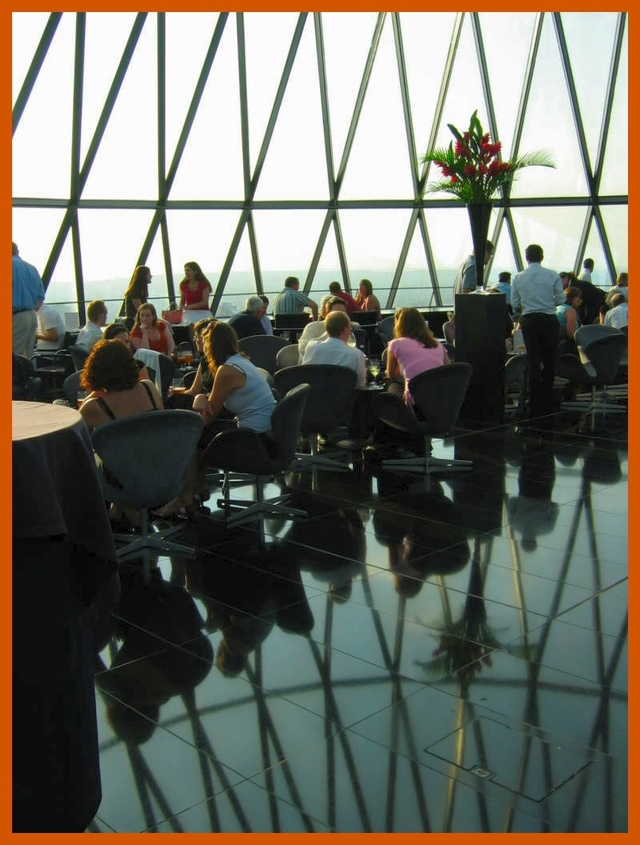 For those of you picturing me spending my Friday evening making small talk at some sort of deli counter with barrels of pickles, think again.  The Gherkin is the affectionate name given to London’s newest landmark building – it’s real name is the Swiss Re building (after its anchor tenant) or 30 St Mary Axe (its address).  But to everyone in London, it’s the Gherkin.  Look at the shape & it’s easy to see why – it looks kind of like a… erm… fat cucumber or, well, other things… so from the time it was still being built it got the nickname, and it’s stuck.

The 40-storey building itself is really interesting.  It was designed by renowned architects Foster & Partners on a circular plan and tapering towards the top in order to appear less bulky than traditional square buildings, and it is London’s first environmentally sustainable building.  This is as a result of some clever tricks by the architects such as the spiral lightwells that run through the building which give greater access to daylight, reducing the lighting requirements; movement and light sensors to prevent unnecessary use of electric lighting; floor-to-ceiling windows to make maximum use of natural light; ventilation and cooling assisted by clever systems in the building’s double glass skin and the spiral lightwells; and extra bicycle parking in the basement, together with extra showering facilities (there are no private car parking spaces).  Further fun facts & figures include that it is 180m tall (3 times the height of Niagra Falls), can transport up to 387 people at one time in its 18 elevators that travel at up to 6m per second, contains 24,000 square metres (or five football pitches) of external glass, and despite its curvy good looks the only curved piece of glass in the skin is the circular lens right at the apex.

Unlike it’s nearby tall neighbour, Tower 42, which also has a (small) bar at the top, The Gherkin was clearly built with an entertainment space in mind.  Whereas Tower 42 looks as if its bar was thrown together from the narrow observation deck around the lift shafts, the top three levels of The Gherkin were designed to function as a light and airy bar, restaurant and priovate function rooms with unobstructed 360 degree views of London.  From Monday to Thursday the restaurant is open only to tenants of the building for lunch and for private functions in the evenings (if you have a spare £9,000 floating about!), but on Friday nights employees working in the building and their guests can reserve tables for dinner or drinks.  And lucky ol’ me has a good friend working there! [**2019 edit – the bar is now open to the public daily – make a reservation.**] 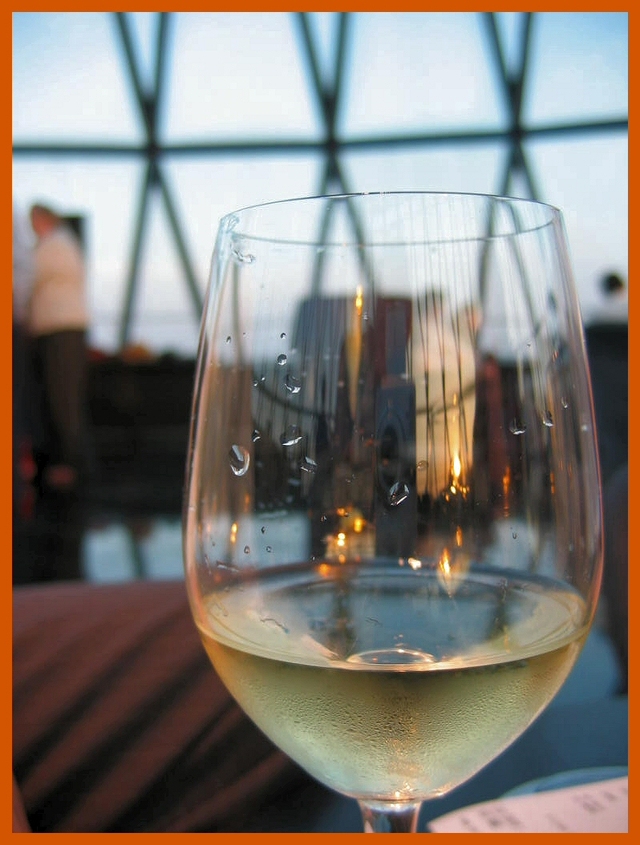 Getting in is a bit of a palaver (as with Tower 42’s Vertigo!) and involves airport-style security and a number of changes of elevator bank, but when you finally arrive on the 39th floor and glimpse the view from the lift lobby through the restaurant window, you can’t help but gasp.  Then it’s a flight of black granite spiral stairs up and you arrive at the bar.  Cue more gasps of delight.  A room with a tall, domed class ceiling, a polished granite floor and a view from here to eternity.  My first reaction was just to stand there grinning for a while, so it’s a good thing Nick and the rest had the presence of mind to grab a table!  As there were already quite a few people there, we got a table roughly in the middle of the room rather than on the edge near the window. But this wasn’t a tragedy as a) even seated near the windows, you can’t get near the glass (this is because of a very wide counter running around most of the room, while on the west side, the bar forms a balcony overlooking the restaurant); and b) the room is spacious enough that you can get up and go and look at whatever view you like at any time.  The entire room feels a little other-wordly as you see the sky through the triangular latticework of the building’s frame, and the pattern is repeated in the reflections on the floor.  Also, whereas you are used to being surrounded by tall buildings in the City, here there is nothing above you or even on your level, except Tower 42 and of course the aeroplanes on final approach to London City Airport. The wine list was short – I must admit that I wasn’t paying too much attention  because I was gawping at the view of Tower Bridge and trying to see our house somewhere in the direction of Canary Wharf.  We ended up with a Marlborough Sauvignon Blanc which was not too badly priced at about £18, although I did covet the Pimms Royale (Pimms and champagne) – a mere snip at £9.50.  There were tapas-style bar snacks which looked good but we didn’t try any.  The restaurant downstairs is run by the Searcy’s group (which is part-owned by Richard Corrigan) and is somewhere I’d love to try.  But Friday night was all about the view.  Seeing as we have had the most sweltering week imagineable in London it seemed entirely appropriate to be able to sit and watch the sun sink as a fiery ball to the right of Tower 42, and then to watch how the purples in the sky changed the mood of the room while nursing a glass of chilled wine.  It’s close to heaven. Literally.