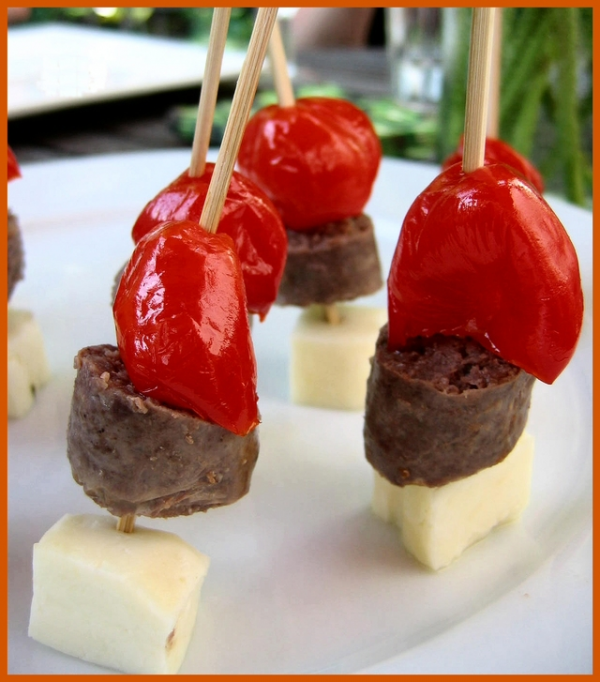 I have a confession to make.  No, don’t worry, I haven’t eaten another deep-fried Mars Bar or binged on Burger King…  No, the confession is far more mortifying than that.  The fact of the matter is that while Stephanie has been a faithful supporter of and contributor to the End of Month Egg on Toast Extravaganza pretty much from the start, I have never taken part in her Blog Party – not once!  Ever!!  Sensing that this situation had to be rectified pronto (and after some not at all subtle prompting from Stephanie!), I decided that this would be a great month to jump right in and participate, with its theme of Man Food.

So the search was on for a canapé that was a) manly and b) preferably of a South African flavour.  Now let me firstly point out that South African men (well, the straight ones anyway…) are not canapé type of guys.  They tend to think of canapés as chips ‘n dip.  This is not a bad thing – I have always had a weakness for chips ‘n dip – but I thought we could try and broaden our horizons a little for this one.  When I think of what it is my husband likes to cook most, it is of course something involving an open fire and a braai (BBQ) grid, so the natural next step was to think of something you could braai and make a party snack out of.  Of course, manly snacks have to be of manly proportions, so no chi-chi little bites would do – there would have to be proper man-sized bites of something with robust, man-size flavours.  But on the other hand, I was planning to serve these at my and Johanna’s Blogday Party where the audience would include other food bloggers, so it couldn’t be too unphotogenic either!!

The end result of my deliberations were boerewors, Peppadew and haloumi cheese skewers.  Boerewors for that robust, manly, meaty touch.  Peppadews for the I’m-so-tough-I-can-eat-bright-red-spicy-things for the testosterone junkies (I used the mild ones but you could use the hot ones).  And halloumi cheese because… well, I love it and it makes a nice flat base to stand the skewers on 🙂   And to prove that my skewers have manly appeal, here’s a photo of a Real Live Man munching approvingly on one! 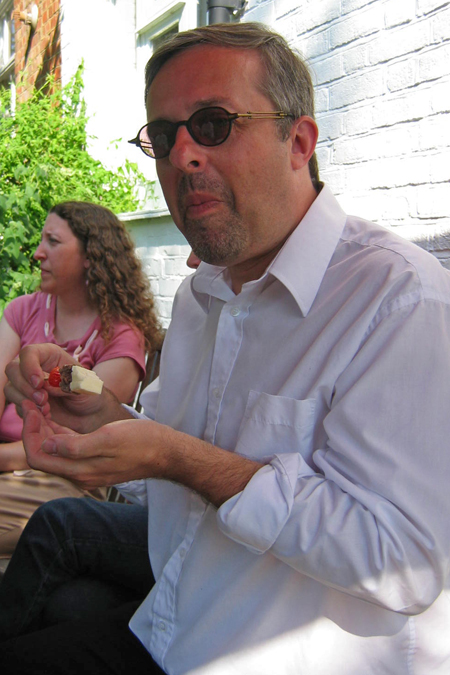 As for the Manly cocktail, this was a tough one.  Given the South African flavour of the food, I first considered what a South African man would accept as a cocktail, and sadly this resulted in either brandy and Coke, or Captain Morgan rum and Coke.  Hmm, back to the drawing board.  I also considered suggesting the epitome of drinking hardcore manliness:  the Red Eye.  For the uninitiated, this is where a Manly Man snorts the salt, squirts the lemon in his eye and downs the tequila.  Roarrrrrrrrrr!!  The line between hardcore and stupid narrows daily.  On second thoughts, best we leave that one out for health & safety reasons!!

What I eventually decided to suggest was the last cocktail I saw my husband Nick ordering.  What with him being a Manly Man and all, I reckoned he was a good barometer of manly cocktails!  The cocktail in question has a robust flavour that would go perfectly with the skewers – a Black Velvet.  This is one part Guinness and two parts champagne, with the added bonus being that I get to drink the leftover champagne 🙂

So off you go – enjoy your manly party food and happy Father’s Day to all you manly dads out there!  And a huge thank you to Stephanie for hosting yet again 🙂

« EoMEoTE#16 – Midnight in the Loeufre Museum
Best chocolate sauce in the world… ever! »