I have to admit that this is the first edition of IMBB that I thought I might not participate in since I started my blog in May 2004.  I have just had too much on lately, what with submitting my first entry for SHF and hosting WBW#6 within days of each other.  And then there was the theme.  We have had rice, terrines, fish, booze and BBQs – all of which were great fun and relatively easy to find inspiration for.  But this month, Carlo from My Latest Supper decided to throw the cat among the pigeons, the bacon sandwich among the vegetarians and the foie gras terrine among the animal rights activists with his theme for IMBB#12 – Is My Blog Taboo?.  The basic premise was that participants living abroad should make something that they considered normal but that people in their adopted country would find abhorrent or taboo. Failing that, you could make something that you don’t like (in other words, your own personal taboo) to see if you could make yourself like it.  Hmmm.

Gave the whole thing some thought.  I think taboo was possibly a misnomer in that my perception (and probably others’ perception too) of taboo generally means you don’t eat something because of your beliefs.  But if you were willing to eat it for something as frivolous as a food blog event, then clearly your beliefs weren’t that strong to start with!! Besides, I’ve never been one for interfering with what others believe.  So making roast pork and bacon butties for the Muslim neighbours was out of the question.  If you take a slightly less restrictive view of taboo and include things that people may find distasteful, that opened up some new possibilities.  As I have mentioned, one of a South African’s favourite culinary treats is biltong.  When you tell the average Englishman that you are about to feed him some raw beef, rubbed with salt and spices and hung out to dry for a week, most of them will run screaming to the hills rather than have a nibble.  So I guess I could have fed a whole bunch of biltong to my English friends, but somehow that didn’t really involve any cooking (as I certainly wasn’t drying the meat myself in my suburban semi-detached house!!).  Something else that is very popular in SA (and especially in my house!) but which seems to have become taboo of late is Aromat – a seasoning made by Knorr, the ingredients of which read “salt, MSG, lactose, etc etc etc”.  Great – two taboo items in the first line!!  But again, feeding people my Aromat popcorn didn’t really seem like cooking, so I quickly abandoned that idea.

I also thought about cooking stuff that I personally might find taboo.  The problem is that a lot of stuff that I would have found taboo ten years ago, I now eat – oysters, foie gras, chilli, tomatoes, rabbit, snails (at a push!)… hell, I even had crocodile on our trip to South Africa in December (and yes, it does taste like chicken!!).  So the taboo list is shrinking.  The things that remain on my “inedible” list are things like bananas, guavas, pawpaw (and, given the general trend of my not liking squishy tropical fruit, I imagine, durian ;-)) and beetroot – bleeeech.  I have tried them all (except the durian) more than once and no, I really do not like them.  So I didn’t really see the point of going to a lot of time and trouble cooking something containing these and (surprise!) hating it.  I’m not 5 years old, I’m not suddenly going to “discover” banana (although I must say I’ve always loved banana bread and muffins – go figure).

I was beginning to despair.  And then it hit me.  Something they eat in the UK that, to my mind, would just be taboo on so many fronts.  Something that I have never eaten and would never make myself, except for the purely scientific purposes of IMBB.  OK, let’s recap – I don’t deep-fry stuff.  I think I get that from my mom – she also didn’t do deep-frying.  We have never owned a deep-fat fryer and we only ever made oven-chips as far back as I remember.  In fact, the only thing I remember her deep-frying was vetkoek – literally “fat cakes”. Since I learned my culinary skills from my mom, I have never deep-fried anything in my life.  Honest.  It just does not happen.  So I guess you could say anything deep-fried is taboo in my kitchen – not only because deep-frying is not great from a health point of view, but also because I am a little nervous about working with great pots of hot oil that can burst into flames if overheated!! But simply deep-frying something was not enough – it had to be something repugnant, something that I would never ordinarily make. Something that went against the culinary grain.

The English love their fried food.  Think of fish & chips – a perfectly good hunk of fish encased in a mound of batter and then deep-fried so that the ratio of fish to batter is approximately 1:10.  Then add a mound of deep-fried potatoes and voila – you have a national institution!  I mean, where else do you find fast food outlets affectionately referred to as “chippies” where you get pretty much exclusively deep-fried food??  Grilling and skinny fries are for sissies – try a chippy for some real fast food!!  Now as you move further north, particularly into Scotland, chippies start getting more and more creative in terms of what can be deep-fried.   I was horrified when, on a trip to Edinburgh, NIck ordered a deep-fried sausage.  Since most pork sausages are pretty high on fat anyway, why on earth would you want to add more??  But there it was – a pork sausage encased in crispy, deep-fried batter, with the obligatory newspaper cone of chips.  But this turned out to be merely the tip of the iceberg.  Apparently you also get (Carlo, Albert and all right-thinking Italians, close your eyes)… deep-fried pizza!!  But what Scotland is far more famous for, in terms of cutting-edge cuisine, is the deep-fried Mars Bar. In fact, there’s even been an article about them in the British medical journal The Lancet (it’s the first article on this page – free registration required to read the full text).  Given the fact that a) I don’t do deep-frying; b) I don’t have a sweet tooth; c) the generally repugnant-sounding nature of this confection and d) its notoriety, I realised that I was going to have to fry me up a Mars Bar.  Apparently, the DFMB originated about 15 years ago in Stonehaven Scotland – finding recipes proved no problem at all. (Hilariously, some recipes suggest using sunflower oil for frying “‘coz it’s healthier” hahahahahahaha.) My recipe turned out to be a composite of all these and something of an experiment.  Here goes: 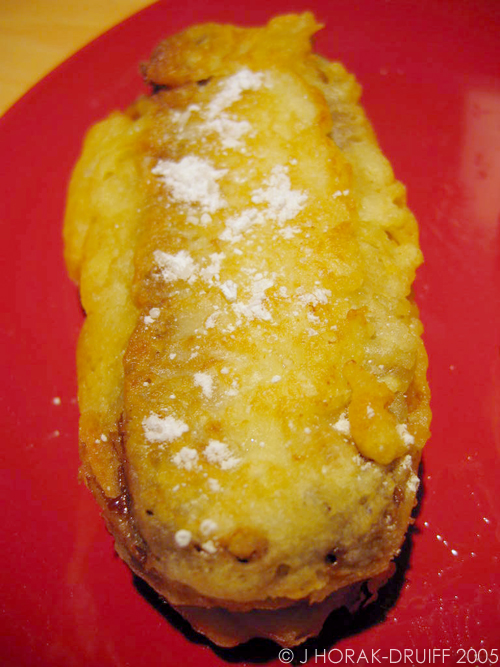 1 cup sifted self-raising flour
a pinch of salt
a pinch of bicarbonate of soda/baking soda
1 cup milk (I would have used beer if we had any in the house.  Maybe next time some Lambrusco for added lightness and postmodern witty irony ;-))
1 egg, lightly beaten
1 Tbsp sunflower oil
sunflower oil for frying
4 Mars Bars (or in South Africa, use Bar-Ones)

Chill the Mars Bars in the fridge (I left mine overnight).

When you are ready to fry, get the Mars Bars from the fridge & on the stove, start heating the oil for frying.  Coat the Mars Bars well with the batter – I just popped mine into the bowl of batter & left them there.  Watch the oil carefully – test its temperature by dropping a bread cube in after about 5 minutes – if it turns brown and crisp after about 20-30 seconds, the oil is ready.  Take your coated chocolates and dunk them carefully into the oil.  Fry until golden and puffy – mine took about 30 seconds, then I turned them and left them for another 30 or so.  Remove with a slotted spoon, drain on some paper towels and serve immediately – nothing worse than cold, soggy fried batter!! You can also try cutting the Mars Bars into bite-sized chunks and coating each individual chunk in batter before frying (for serving on cocktail sticks later…!).

OK – how did they look?  Like big, clumsily-fried fishfingers coated in batter instead of crumbs (this could also be my frying technique or lack thereof…).  How did they taste?  Erm, well, not too bad actually.  The nougat (my least favourite part of the Mars Bar) holds things together while the chocolate and caramel melt rather fetchingly, and the batter was reasonably light and crisp.  Nick wolfed his down but declined to help me finish mine – a telling comment.  But I must admit that about 15 minutes later I felt a bit queasy from a sugar ‘n grease overload.

Have I overcome my taboo?  Erm, no. But I am less terrified of deep-frying 😉  And I can tick off my “to do before I die” list the item relating to “deep-fry and eat a Mars Bar”.

« Fame at last in the first the South African Blog Awards!
Scramble the troops – it’s EoMEoTE#4! »