You are here: Home / Recipes / Dessert / Best chocolate sauce in the world… ever! 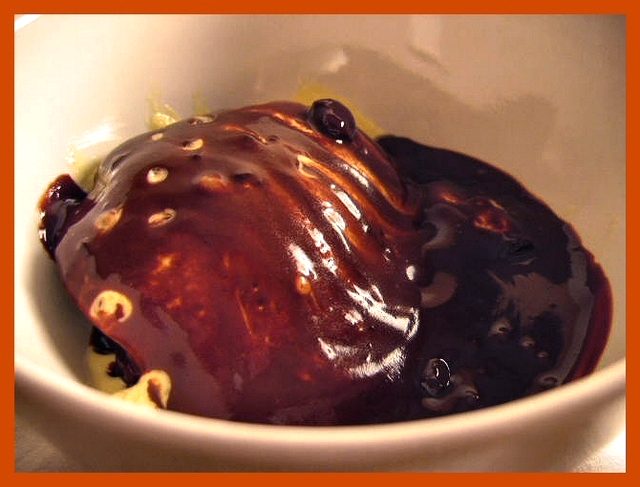 When I was living in South Africa in my beloved and much-missed little apartment and Nick was over here in London, people were worried that I might get lonely or spend my nights pining and crying into my pillow.  They also worried that because I was living on my own, I would stop cooking properly and subsist entirely on baked beans on toast or something, because “it’s no fun cooking for one”.

HAH!  Wrong on both counts.    Cooking for one is FANTASTIC, mainly because you can have… anything you want.  Every day! I found that I cooked far more adventurously when I cooked for one, partly because it was fun and I had endless time (no hungry husband hanging around wondering whether dinner will ever be finished); and partly because expensive ingredients for one are usually comparatively affordable 😉 The other huge bonus was that there were always leftovers, so I really only had to cook every second night: there was always a Tupperware full of leftovers in the fridge.  With Nick around, leftovers become a purely academic concept as his capacity for food always exceeds my expectations :o)

Anyway, so much for a singleton not cooking properly.  As for the “oooh, won’t you be lonely?” argument, nothing could be further from the truth.  For a start, my dear friend Bronwyn moved in two doors down from me and for 18 months we lived literally 30 feet apart.  This meant that at least half the nights of any given week, we popped round to each other’s and shared a dinner.  It became a standing joke – Monday night was “Supper Club”, and the first rule of Supper Club was…. you do not talk about Supper Club!  We spent many an evening gathered around the bar counter of my open-plan kitchen, or giggling at Whose line is it anyway? over dessert.  Anyway, apart from that standing dinner date, I also had my parents and brother around quite a lot.  In fact, when my mom went away on business (which was quite often), I always made a point of having my dad around for dinner.

Now my father is a very easy dinner guest.  If you settle him with a good coffee table book (or car magazine!) plus a gin & tonic  and some crisps when he arrives, he is quite happy until dinner is on the table.  After dinner, he is equally happy to watch something on TV while you prepare dessert.  In fact, it looks as if he pays no attention whatsoever to what you might be doing in the kitchen, and judging from his total concentration on the TV, it looks unlikely that he tastes what you serve for dessert ! 😉  So I was very surprised when, after one of these visits, my mom called me the day after she returned from her trip to ask “what on earth did you give your father for dessert the other night?”  I reached into the memory a bit and recalled that it was somewhat unremarkable-sounding ice cream & chocolate sauce.  “Why do you ask?”  “Well”, replied Mamma, “your father said that he was watching you in the kitchen while you were making it and you used two whole slabs of chocolate!!” He thought it was the most decadent thing he had ever tasted and he probably isn’t far off.

I’ve had the recipe for at least 7 years and by the look of it, it came from the trusty Sunday Times Magazine.  You can make loads of sauce and freeze it – or it keeps well in the fridge for up to a week.  Oh yes… and it’s sinfully divine!

60ml rum (I have also used brandy or sherry)

Put the raisins into a shallow dish and soak in the sherry for as long as you can – at least overnight.

Break the chocolate into squares and melt it in a bowl over hot water (or in the microwave).

Stir in the cream, sugar and coffee and mix well (you may need to return it briefly to the microwave/heat to keep it at a stirable consistency until all the sugar has dissolved.

Stir in the raisins and any sherry left in the dish, mix well.  Serve warm poured over good vanilla ice-cream.