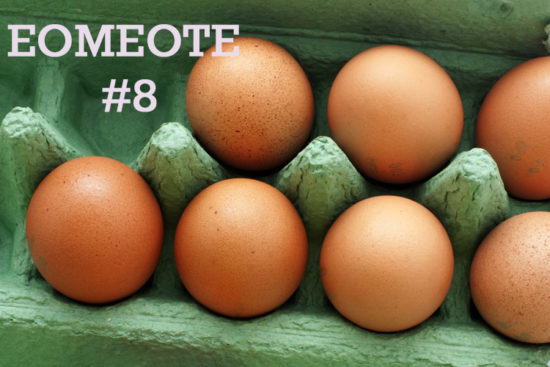 “Cooksister was beginning to get very tired of sitting by her sister on the bank, and of having nothing to do: once or twice she had peeped into the book her sister was reading, but it had no pictures of or conversations about eggs in it, `and what is the use of a book,’ thought Cooksister `without pictures or conversation regarding eggs?’

So she was considering in her own mind (as well as she could, for the hot day made her feel very sleepy and stupid), whether the pleasure of making an omelette would be worth the trouble of getting up and gathering the eggs, when suddenly a White Rabbit with pink eyes ran close by her.

There was nothing so very remarkable in that; nor did Cooksister think it so very much out of the way to hear the Rabbit say to itself, `Oh dear! Oh dear! EoMEoTE is late!’ (when she thought it over afterwards, it occurred to her that she ought to have wondered at this, but at the time it all seemed quite natural); but when the Rabbit actually took a watch out of its waistcoat-pocket, and looked at it, and then hurried on, Cooksister started to her feet, for it flashed across her mind that she had never before seen a rabbit with either a waistcoat-pocket, or a watch to take out of it, and burning with curiosity, she ran across the field after it, and fortunately was just in time to see it pop into a large chicken coop behind the hedge.

In another moment in went Cooksister after it, never once considering how in the world she was to get out again.”

Has Cooksister gone mad, I hear you ask??  Well, not more so than usual.  Just wanted to get the ball rolling on the Drama Queen edition of EoMEoTE, the blogosphere’s only ovo-litero-culinary monthly event (more info below…).  And I thought this particular piece to be rather fitting, what with the appalling lateness of this month’s announcement.  I mean, I must have already had half a dozen submissions and I haven’t even put together an announcement…. I have also had loads of comments and e-mails speculating on whether EoMEoTE is on hiatus, whether I am actually hosting, whether you’ve accidentally missed EoMEoTE etc etc etc.  What can I say – I’m touched! 😛

To answer your questions:

So now that we have established that EoMEoTE is in fact going ahead, why is it so inexcusably late?  Mostly because a large part of my time and energy in the past week has been directed towards arranging and hosting the Second UK/Euro Food Bloggers meet-up:  A picnic at the Henley Royal Regatta!  It will get its own post soon, but for now, I’ll just say we had five food/wine bloggers and a number of friends and family and it was a roaring success!  But lolling on a riverbank drinking Pimms takes time, and so the post announcing EoMEoTE never went up this weekend…  But here it is now and (I hope) it’s been worth the wait!

After the roaring success of our past two ovo-litero-culinary events featuring haikus and limericks respectively, I have decided to give the poetry a break for now and give you more scope to let your imagination run wild.  So this month, I would ask you to submit your entry in the form of (or at least including) a short dramatic work.  This can be a book or movie spoof, eggy fan fiction or an entirely original creation – I leave that part up to you 🙂

Here is the part where I do prescribe stuff though:  First, for the uninitiated, EoMEoTE started as the monthly end-of-month-and-end-of-paycheck cheap eats celebration, originally an in-joke between me and Anthony of Spiceblog.  However, since those humble beginnings it has grown bigger every month (hey – IMBB even followed our lead last month and had eggs as a theme!) and it has recently taken on a distinctly literary slant with participants submitting haikus and limericks along with their eggy creations.  And as you see above, this month is no different – so get those egg-fuelled soliloquies down on paper!  (If you have already sent me your link, you are excused from this requirement – but of course, you are always welcome to amend your post to add in a couple of lines of dialogue…!) Apart from that, the rules are as usual:

1. The dish you make must feature some sort of eggs.

2. These eggs must be served on top of/under/next to some sort of carbohydrate to which heat has been applied.

3.  Write up your dish on your blog and Include a photo of your dish.

4. Leave me a comment containing the link or drop me an e-mail.

I will do a dramatic summary of all your posts sometime before the end of the week.  Yes, I hear you say, we’ve heard that one before!!  But this time I HAVE to get it done this week as I’m off to Granada for a weekend with my 2 best friends on Friday – so alas, no weekend to make up for my laziness during the week!

So let me be off through the looking glass (so to speak!) after the White Rabbit to go and write up my eggy creation.  Look forward to lots of eggs, toast and drama from all of you!