You are here: Home / Events / EoMEoTE / Bantam of the Opera – the EoMEoTE#4 round-up 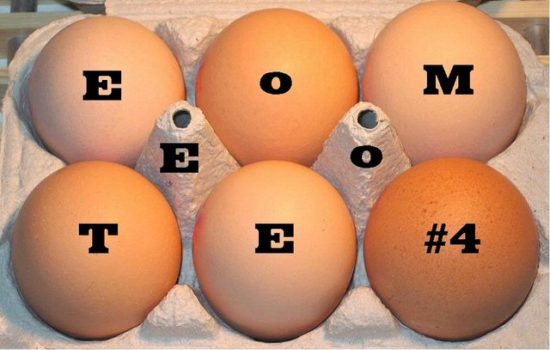 You may well ask what the title of this post has to do with anything…  Well, nothing, apart from the fact that this months’ EoMEoTE has been marked by the proliferation of chicken and egg-related puns, ballets, operas and films.  So I thought I’d pick my favourite and use that to headline the round-up!  I was thrilled when this month for the first time, before the official announcement of EoMEoTE#4 had even gone up, I had already received two entries!  And neither one was from a person related to me in any way!! I was also most gratified to read the following description in one of the posts:

“Ahhh, EOMEOTE, my favorite foodblogging event! I love the story behind it, i love the low-rent spirit of it, and i love the eats. *contented sigh*”

You’ll have to read the entries to see who our Number One Fan is!  With a record-breaking seventeen entries you may have more reading than you bargained for…

The first eggy entry was already waiting for me in my inbox a week ago – Julia of Aroma Cookery in Singapore was soooo keen to get going that she could not wait another minute to share her mini flossy eggs on toast with us.  These looked delightful and featured an ingredient that I’d never heard of before – pork floss (although it looks as if it could be the distant cousin of the grated biltong you can buy back home in South Africa).  Go and check out her post (and beautiful pictures!) to get the full story.

Hot on her heels was Helen of Grab Your Fork in Sydney, who saw Julia’s post, “shrieked and raced to the fridge to see what was available”.  Great mental picture!  What she found in the fridge was quickly turned into toasted ciabatta with scrambled egg, chorizo and rocket. Her description of the spice sausage and the silky eggs and extra yummy picture had my stomach rumbling in an instant. And Helen, in answer to your question, it’s never too early for sangria!!

The Foodnerd over in Boston was up next with an explanation of why waffles count as toast.  The argument was a winner on two fronts – firstly because the waffles were in fact toasted in the toaster, and secondly because their use was born out of necessity and what was left in the fridge at the end of the month, in keeping with the spirit of EoMEoTE.  Foodnerd’s offering was eggs and bacon on toasted waffles with boiled cider.  Boiled cider was another new ingredient to me – apparently it looks and acts like maple syrup but retains its appley taste – together with some meyer lemon marmalade it was the perfect foil for the fatty, salty eggs and bacon.  Mmmm – sounds like a great combo!

Santos from The Scent of Green Bananas in Guam brought us her goldenrod eggs which (she says) are a staple of home economics classes.  Why?  Because they “teach an addled adolescent how to boil an egg, how to create a cream sauce, temper an egg yolk, and use a grater efficiently” – all indispensible skills, you’ll agree!  The end result is a creamy, eggy sauce on toast topped with grated boiled egg and sounds delicious.  Now what I want to know is why we only ever made lousy cornflour mould and rock cakes in my Home Ec classes!!

Zoe from Crazybrave in Australia, egged on by Anthony, cleared out her fridge and presented us with her scrambled egg, English muffin and rainbow trout creation. My award for Quote of the Month goes to Zoe for saying “I know Foucault about post-modernism but I do know how to scramble an egg”.  Marvellous stuff – go read it.  And I struggle to think of a nicer combination that scrambled egg and trout…

Julie from A Finger in Every Pie in NYC goes for a high-protein breakfast and presents us with dilled egg salad on prosciutto bread.  Egg salad sandwiches were one of my childhood favourites and I adored my mom’s ones, so this dish easily finds a place in my heart.  All I have to do now is find a bakery around here that makes bread studded with nuggets of prosciutto – what a heavenly idea.

From there we go to visit Elizabeth at Blog From Our Kitchen, who seems to be disappearing under a blanket of snow!  But luckily they laid (heh heh heh) down some provisions and were able to join in the month’s EoMEoTE to present their delicious bacon, cheese and spinach omelette with a side order of toast.  It may be cold outside, but it sure is warm & toasty & eggy inside!

Stephanie of The Happy Sorceress, over in Tennessee, produced one of the prettiest entries we’ve ever had for EoMEoTE – tamago toast nigiri.  Intrigued?  I was – I’d never heard of tamago before!  But let me assure you that if you’ve ever wanted to serve hors d’ouvres before breakfast, check out this post!!

Moira of Who Wants Seconds here in the UK wrote a post eggceptionally full of poultry puns, but in between constructing these she still found time to put together a proper cooked breakfast of scrambled eggs, pork chipolatas, home fries and toast.  Hurrah for the cooked breakfast, especially with the chilly weather we’ve been having…

And award for egginess beyond the call of duty goes to Sam of Becks & Posh in San Francisco, who spent the first night in her new home spectacularly cleaning out an oven and then whipping up a simple meal of Gruyere cheese omelet with toasted Pain au Levain.  Me, I would have collapsed in an exhausted heap and called for pizza.  Yes, you are right – Anthony and I are very proud of you!!

Andrew of Spittoon here in the South of England outdoes himself with a “breakfast dessert” – Cinnamon and Star Anise crèmes and Toasted Brioche. This post has it all – imaginative food, a wine matching suggestion and an Oscar Wilde quote…  Now that’s what I call cluck for your buck!

Welcome to first time EoMEoTEer Christina from Peasprout Spouts (who I gather is a medical student in the US??).  She stayed true to our low-rent spirit and concocted an end of the month meal of a “square egg” on home-made desem bread, topped with havart and sriracha sauce.  Check it out – I rather like the polka-dot effect of the sauce on the pale, creamy background of the eggs & havarti…

This month’s EoMEoTE also sees the arrival of a brand new food blogger in our midst.  In between studying for exams, Tanvi of From the Pantry in LA found time to start her food blog and to whip up a cilantro and cumin seed omelette on honey wheat toast.  The combination of the cumin seed and fresh cilantro leaves with eggs sounds like a wonderful idea to me and gives the whole dish an Indian twist.  Thanks Tanvi and hope to see you again next month!

Next up was Lyn of Lex Culinaria in Canada who (like me) wakes up full of good intentions on Saturday morning about early rising and exercise, but who (like me) ends up lolling in bed and making slap-up breakfasts instead.  I like her already!!  Following this month’s unofficial theme of using wine and eggs together, the breakfast she threw together was the incredibly delicious sounding wine poached eggs on Emmenthal toasties with mushrooms on the side.  In my book, a breakfast like that would win over a run any day!

Anthony, co-founder of the EoMEoTE, over at Spiceblog in Australia was another one who attempted the tricky task of matching eggs and wine with his fried eggs in red wine (with hash browns, bacon, tomatoes and New Norcia sourdough toast).  All was well until he chose *those* words and *that* picture and that set off a storm of comments most unsuitable for a family blog!!  But the end product looked and sounded quite delicious!

And last but not least, there’s me, the Cooksister.  I departed from my usual breakfast theme and decided to make this month’s contribution a light supper.  Clearly I’m dreaming of summer because the end result had more than a taste of the sunny Mediterranean – scrambled egg, olive and feta pita pockets.  We had these with a bottle of Chardonnay, good company (my friend Bronwyn) and a lot of laughs – what more could you want on a Saturday night? There’s also a picture of a hot chick at the end of the post, especially for the guys 😉

And that’s it for this month – I continue to be amazed at the inventiveness that you have all employed with the same basic ingredients!  And who knows, some of you may have taken my “no deadline” stance so seriously that there may still be more eggy adventures to come!  I’m off on a business trip for the next 2 days so don’t be alarmed if you send me an entry and nothing happens – I’ll be checking mails & blog again on Tuesday night.

Coming soon to a blog near you – EoMEoTE#5!  Watch this space…